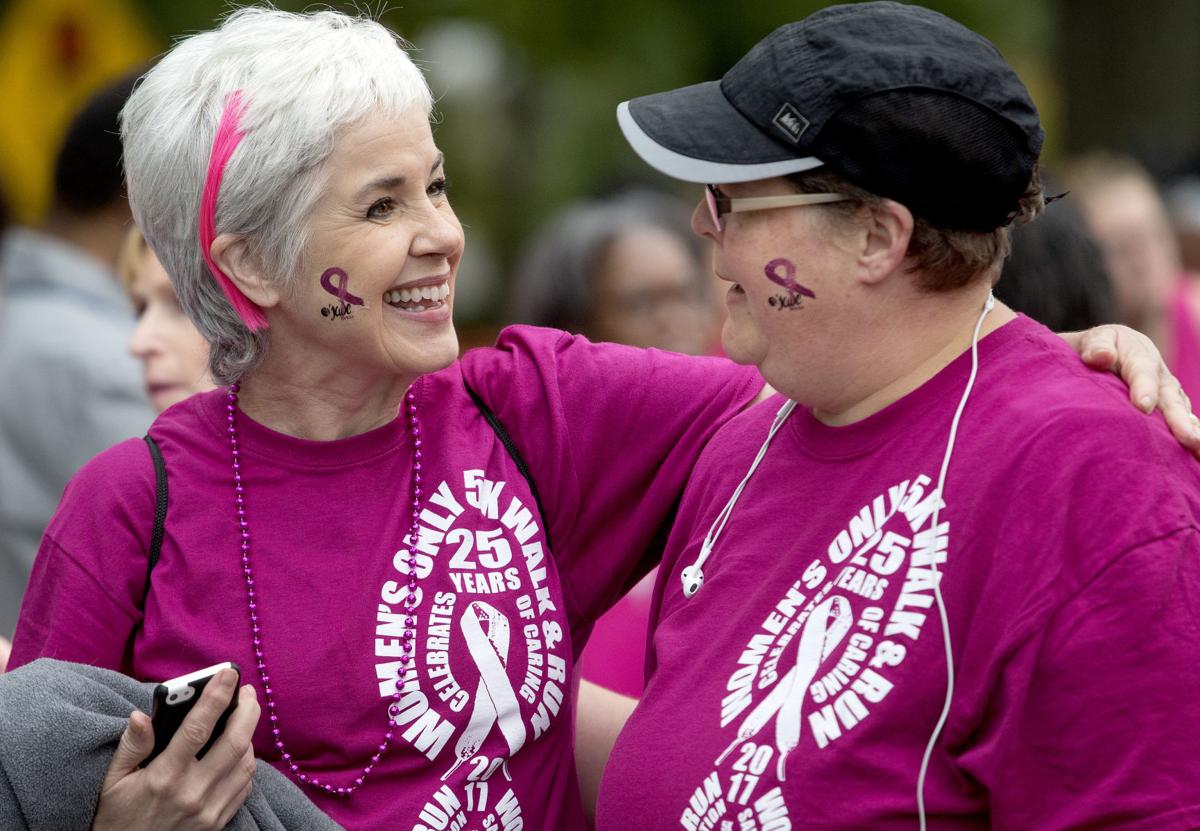 Fran Rinehuls, left, and Laura Phillips catch up before the Women’s Only 5K Walk & Run on Saturday, Oct. 14, 2017, in Greensboro, N.C. The two women consider themselves FYNN (Finding Your New Normal) sisters,, diagnosed with cancer at the same time they shared the experience. Both women will be 10 year survivors this year. 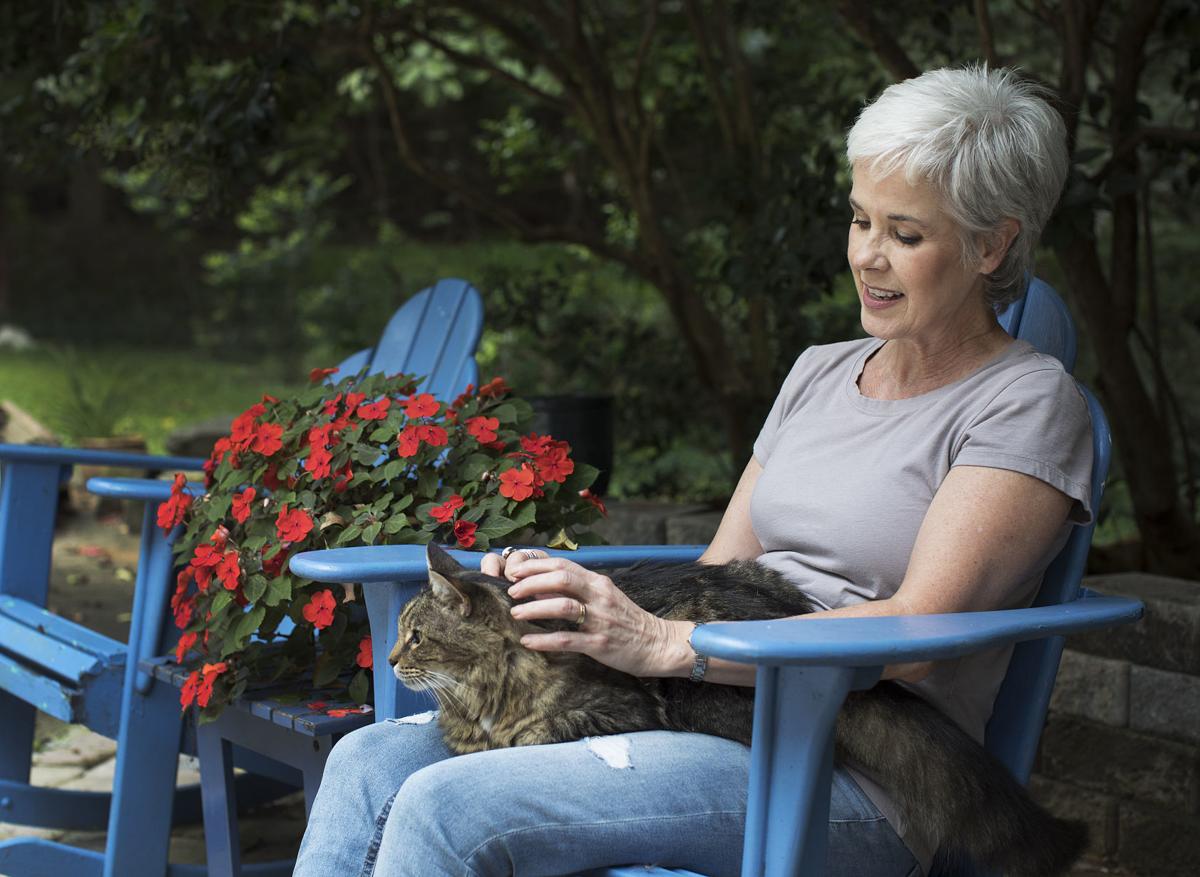 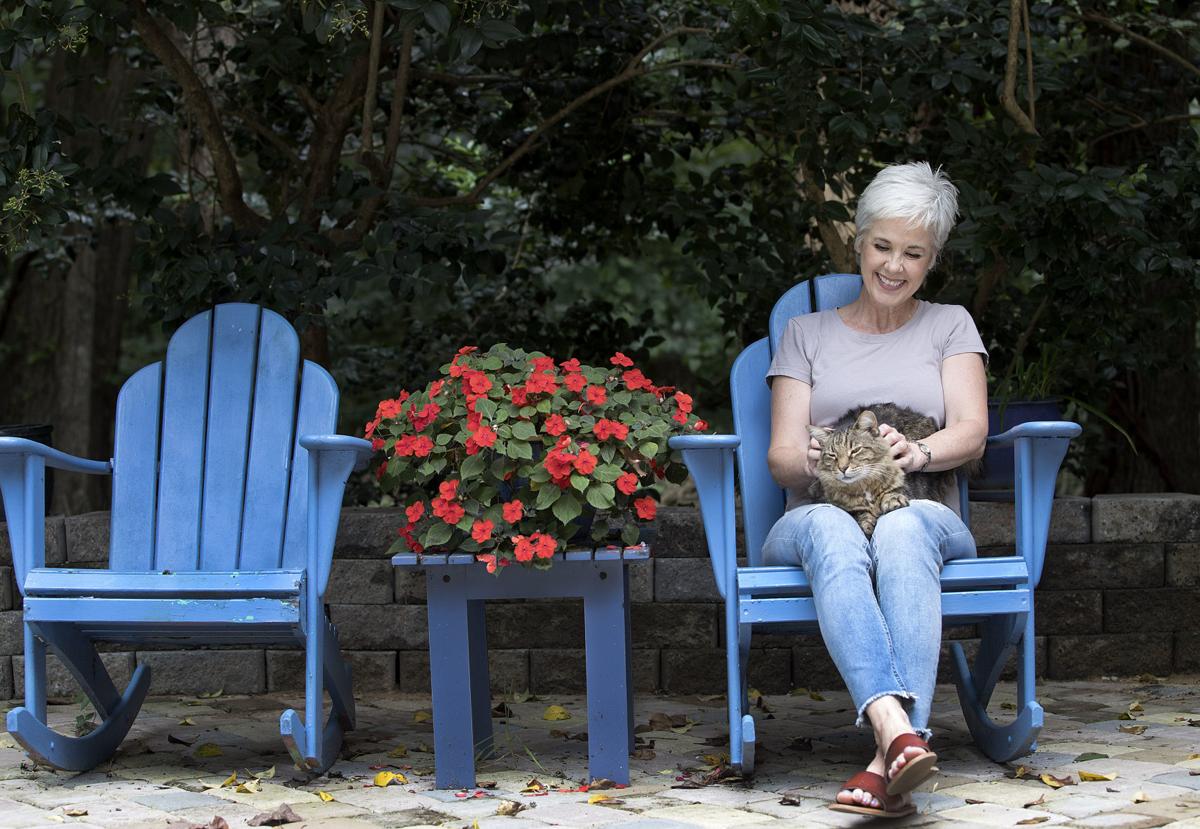 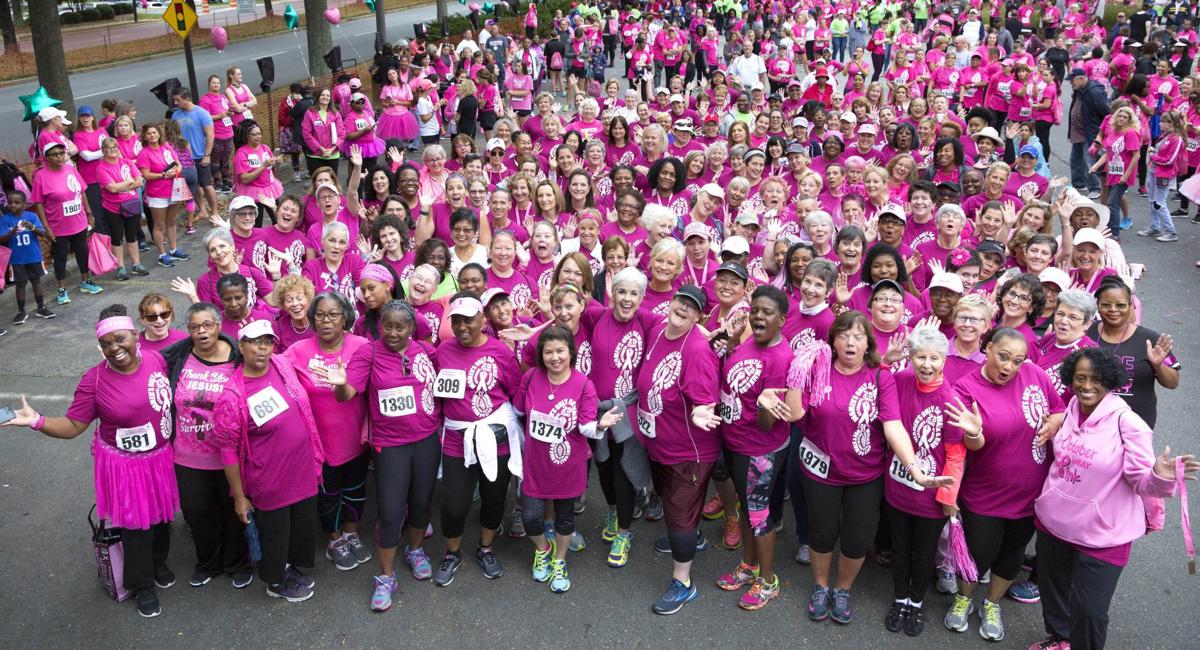 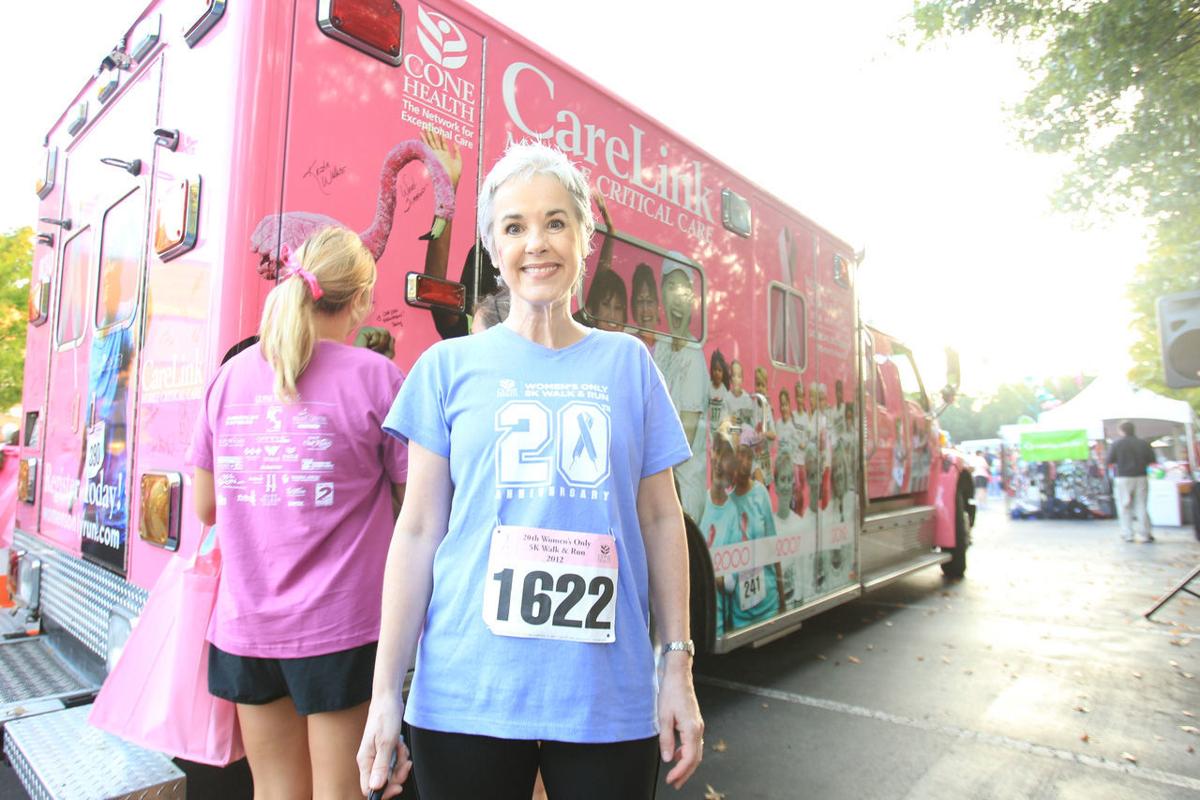 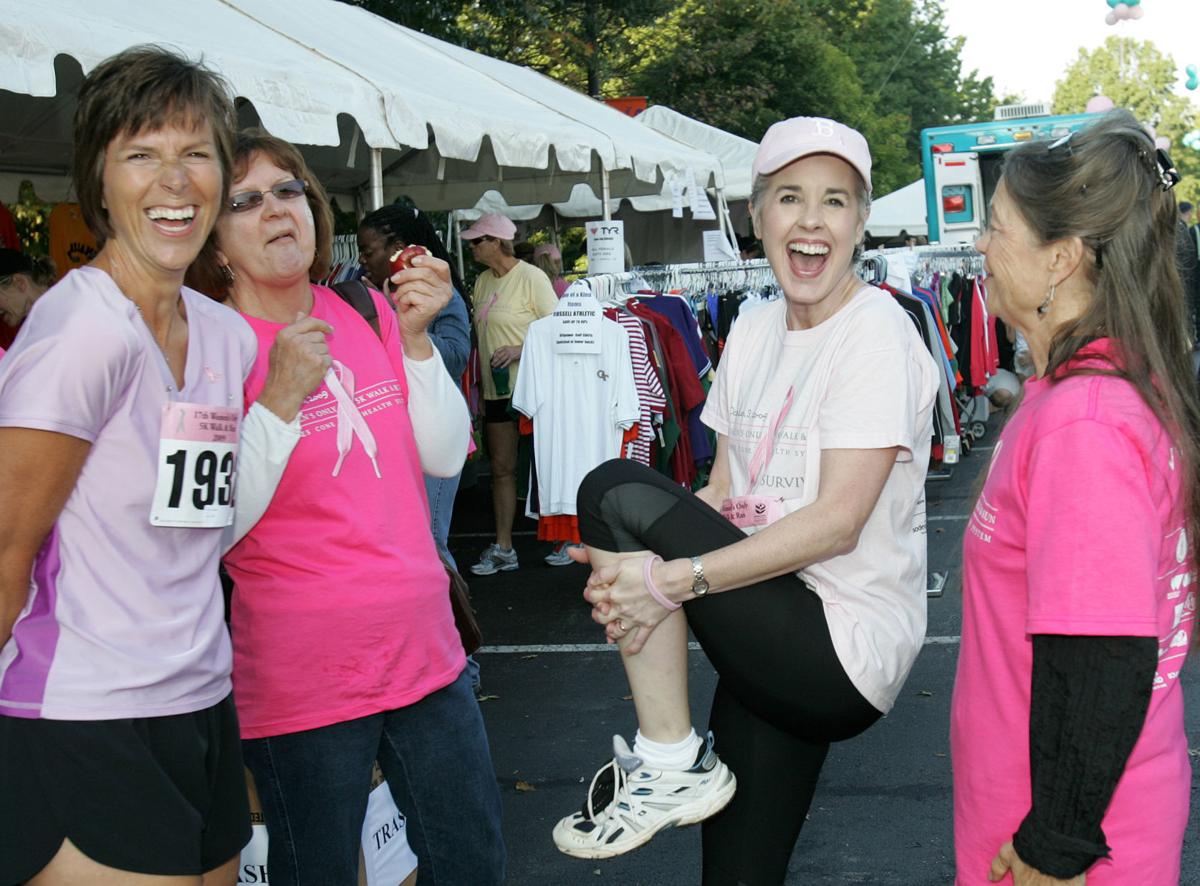 By Emily B. Harris

After Fran and her husband, David, brought Emma into their home, they learned she had adrenal cancer. Emma’s fur fell out in clumps and Fran, a pharmacy tech turned hairstylist and salon owner, used a holistic approach in treating Emma’s fur loss that included massaging oils into Emma’s skin and putting her in shirts to keep her warm.

People were scared of Emma, but Fran encouraged them to pet her, feel her skin. “It’s so soft,” she would tell them. Emma, she says, taught people about not making assumptions about diseases and how to be kind to patients.

“She prepped me for it, when I lost my hair,” Fran says. “I had a balding dog in my salon, and then me,” she laughs. Fran, a certified wig specialist for cancer patients, made six wigs for herself, but chemo broke her head out. “I had to work bald.”

She got involved with the Women’s Only Walk & Run as a vendor, invited by her friend Shawn Houck, the race director on Cone Health’s marketing side from 2000-2011.

“Fran is an artist who does pottery and jewelry,” Shawn says.

The next year, Fran’s sister had breast cancer, so she went to support her. The following year, a girlfriend had it.

“I was coming up on my 48th birthday. I heard this knowing in me: ‘Oh my gosh, I have breast cancer.’ I couldn’t feel a lump. I just knew I had it,” she says. After her mammogram came back fine, Fran pushed for additional testing. The Gail Model for Breast Cancer Risk put her at a high enough risk for an MRI, which found cancer deep inside her chest wall.

“So if I had not listened to my intuition, if I had not pushed, I know I would have been way advanced by the time it showed up on a mammogram,” she says.

In 2008, Shawn asked her to make the first-place finisher’s gifts. Fran had finished treatment in May, and the race was in October.

“I was so honored to be a part of it in that way, so I ran the 5K. I cried the whole time coming past the cancer center because it was so profound,” she says, her soft voice strong. “I got very sick with my cancer. I had to go once a week. I couldn’t drive. My husband would pick me up. My friends would take me. It was just so amazing when I think how many times back and forth my friends carried me, and this time I carried myself.”

Shawn says Fran’s background, experience and spirit make her an amazing advocate. “When you’ve seen cancer, it puts things in perspective. She is able to identify with that experience,” Shawn says. She says Fran is involved as a volunteer, spokeswoman and runner.

Being a survivor makes you want to be a voice for others, says Fran, who is running this year, her 10th since she finished treatment. By registering, you’re helping provide mammograms to women who can’t afford them. “You’re making a difference,” Fran says. “What else is there?”

Fran Rinehuls, left, and Laura Phillips catch up before the Women’s Only 5K Walk & Run on Saturday, Oct. 14, 2017, in Greensboro, N.C. The two women consider themselves FYNN (Finding Your New Normal) sisters,, diagnosed with cancer at the same time they shared the experience. Both women will be 10 year survivors this year.