This rendering shows plans for the "Say It Loud" street mural to be installed on Lindsay Street, between Cumberland and Beech Streets in Greensboro. 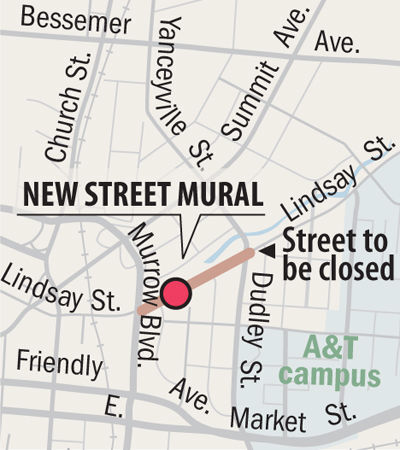 This rendering shows plans for the "Say It Loud" street mural to be installed on Lindsay Street, between Cumberland and Beech Streets in Greensboro.

GREENSBORO — Lindsay Street, from Murrow Boulevard to Yanceyville Street, will be closed this weekend for the installation of a mural on the pavement.

The closure will occur from 7 a.m. Saturday to 7 a.m. Monday. Painting is scheduled to begin Saturday afternoon.

It will be installed in the eastbound lanes of Lindsay Street between Cumberland and Beech streets, adjacent to Cumberland Park.

Harper and Foushee drew inspiration for the design in part from James Brown's 1968 song, "Say It Loud – I'm Black and I'm Proud."

"We were inspired to create this street mural by the Black Lives Matter movement and this era of enlightenment," Foushee said via email. "We wanted to remind the large African American population and progressive young leaders of change to 'Say It Loud!'"

Added Harper: "As Nina Simone said, 'It's an artist's duty to reflect the times.' Through art we strongly wanted to encourage and remind BIPOC (Black, indigenous and people of color) to assert our pride using our voice, to strategically work towards gaining fair treatment and better opportunities. Especially in our current climate we want to help people to register to vote and be accounted with the 2020 Census."

"This song was written during a time when African Americans were protesting for civil rights as well," Harper said, "so it was fitting we used a phrase that would educate and inspire us to press hard for change, equity and equality. This is call and response phrase that is well known in the Black community so every day we will say it loud, that we are Black and proud."

It is the third project approved through the city’s pilot Street Mural Program, overseen by the city’s office of arts and culture, Creative Greensboro.

The murals add to street art on plywood that cover downtown businesses, painted by artists after the May 25 death of George Floyd in Minneapolis and resulting protests against police brutality and racism.

The city announced the Street Mural Program in June.

Since then, artist Phillip Marsh led the group that painted the words "One Love" in yellow paint on Davie Street, between Friendly Avenue and the crosswalk between Center City and LeBauer parks.

Then artist Rasheeda Shankle and project leaders Kelley Creacy-Durham and Jason Keith led the effort to paint a "Black Lives Matter" mural on Elm Street between Market and Washington streets.

"This pilot street mural program has been a fantastic opportunity for our creative community to contribute to important and beautiful place-making projects around the city," Ryan Deal, who runs Creative Greensboro, said via email.

"It’s also been encouraging to see additional community support for these projects to help cover the costs for materials and artist fees, in addition to the many volunteers who have helped to bring these artworks to life," Deal said.

'It takes human beings to fix this.' More than 70 people gather in Winston-Salem to honor John Neville and his family.

Even N.C. students in virtual classes may have to come to school for standardized tests

'The virus is with us': Cooper extends restrictions for bars and gatherings