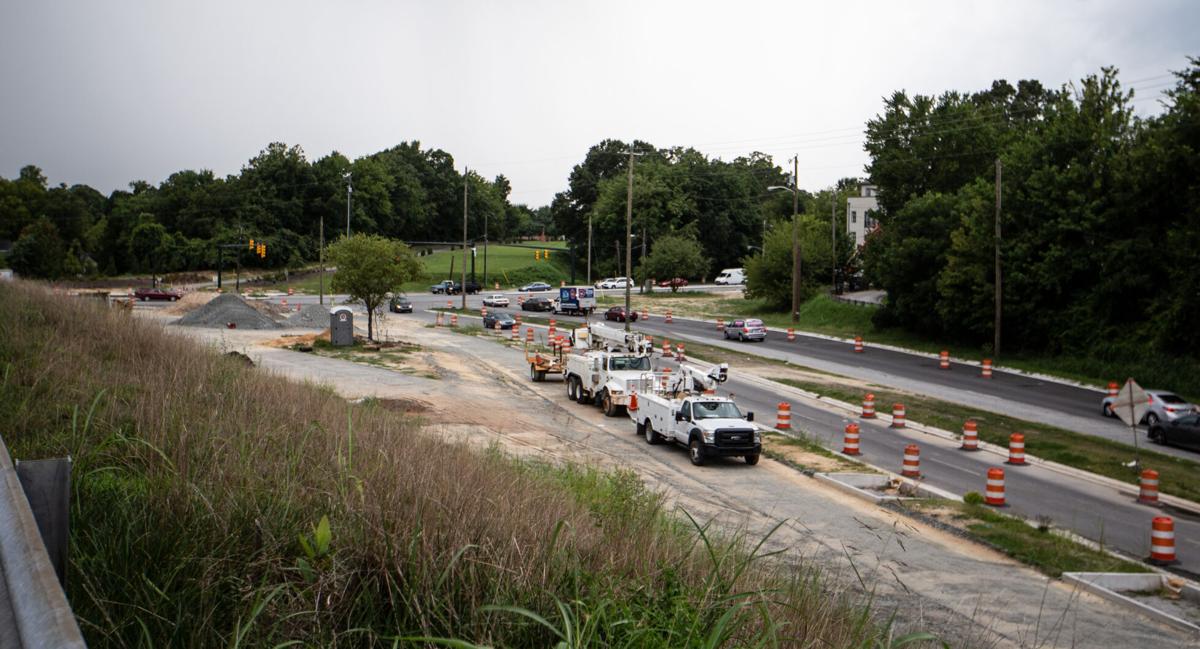 Downtown Greenway construction is underway at the site of the Freedom Cornerstone at the northeast corner of Murrow and East Gate City boulevards. Its theme is inspired by the city’s role in the Civil Rights Movement. 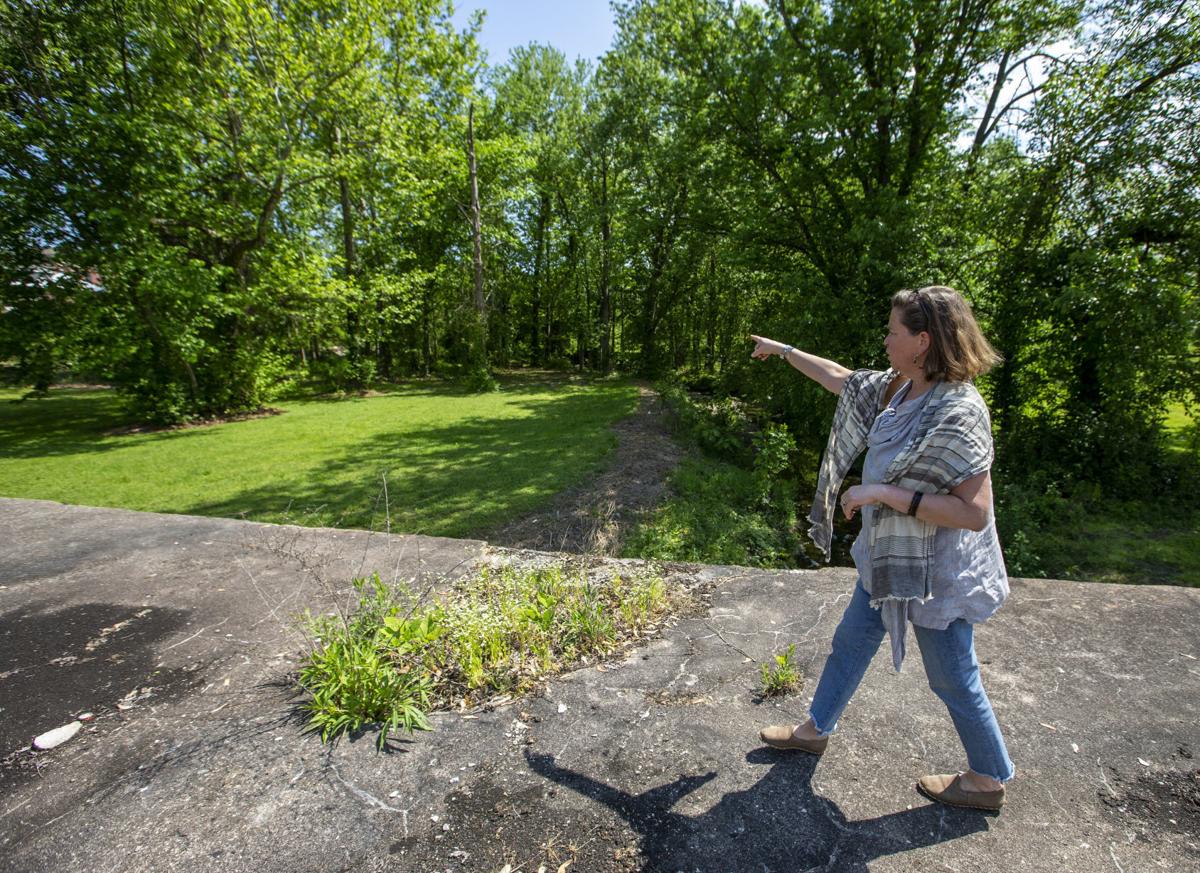 GREENSBORO — As the Downtown Greenway moves toward completion next year, so does public art along its path.

"Public art has been a priority for the Downtown Greenway since its inception, and now more than ever," Project Manager Dabney Sanders said.

"We see people wanting to make connections across the community during this time of COVID-19 and greater racial equity awareness," Sanders said.

Two major artworks — and two smaller ones — are now in the works.

"Our public art is an amazing way to learn about the community’s history and its varied neighborhoods that surround downtown," Sanders said.

She has noticed a dramatic increase in greenway usage since the arrival of the COVID-19 pandemic, as people seek opportunities to get outside.

Radcliffe Bailey, an Atlanta artist renowned for depicting African American history and culture, will design the fourth and final Cornerstone.

The Freedom Cornerstone will sit at the northeast corner of Murrow and East Gate City boulevards. Its theme is inspired by the city’s role in the Civil Rights Movement, especially the pivotal 1960 lunch-counter sit-ins that served as a catalyst to the larger movement.

Bailey's selection was announced in February. On Monday, he will speak in a Zoom webinar about his ideas on freedom and his work.

At the same time, Thomas Sayre works in his Raleigh studio on his monumental West Woods sculpture for 501 Guilford Ave., on the greenway's final section.

They have another art piece in the works for Smith Street, along a completed section of the greenway. It's a series of five metal archways, painted bright orange, with string lighting and vines overhead.

"These pieces add huge value," Sanders said, "not only contributing new pieces of public art to the Greensboro community from well-respected and internationally known artists, but also enhancing the community’s experience when they are out and about on the greenway."

Sanders works with Action Greensboro, an arm of the Greensboro Chamber of Commerce that has joined with the city to create the greenway.

The $43 million project, financed with public and private money, is expected to be finished next year. So far, 1.5 miles have been completed, and another 1.5 miles are under construction.

The remaining mile will run along the former Norfolk Southern Railroad tracks, from Morehead Park on Spring Garden Street to the Meeting Place cornerstone — an area created for people to congregate — at West Smith and Prescott streets.

It will cross Market Street along the abandoned railroad tracks at a traffic light to be installed there.

Sanders said she expects that construction contract to be put out for bids by year's end.

Bailey is not expected to present his Freedom Cornerstone design plan during Monday's public Zoom conversation. In addition to the artwork, he will design the entire site and oversee its installation for the $350,000 project.

He will present his plan to the greenway's art selection panel on Sept. 15, and the public will see it sometime after that.

Bailey will join in conversation with Ayla Amon, a contract curatorial assistant at the Smithsonian National Museum of African American History and Culture and a visiting professor at UNCG.

Greenway organizers have found that virtual meetings reach larger audiences than face-to-face meetings, Sanders said. They will record it and later link to it from downtowngreenway.org.

"This was a way to allow people get to know Radcliffe a little better under the social-distancing guidelines," Sanders said.

Sayre's $400,000 project is in the Westerwood neighborhood. Greenway planners announced his selection in April.

To create his art, Sayre forms earthcasts from the soil and earth from the ground where his sculptures will eventually stand.

He digs large shapes from the earth with a massive tree spade. Shapes are filled with concrete mixed with iron oxide, along with structural supports. When the concrete cures, it is pulled up from the earth and permanently set in place.

Sayre’s West Woods earthcasting will be located on a site at Guilford Avenue and the railroad tracks. It’s owned by Greensboro College and partly occupied by a theater department building.

The sculpture will stand behind the building, between the railroad tracks and the stream. It will be easily seen from West Friendly Avenue.

His rendering shows three cairns — man-made piles of stones made from earthcasting. The tallest cairn stands about 21 feet.

The cairns stand along a pathway and surround a raised platform that could be a performance space, or a place to simply hang out and eat lunch.

The path will feature flush stainless-steel cutouts of 16 small critters found in the College Branch stream that meanders through the site.

Sayre should be working on-site in October and November. He expects to complete the project by Dec. 1, weather permitting.

Greenway planners hope to receive proposals from North Carolina artists by Sept. 10 for another project: a mural on bridge supports at the Morehead Park trailhead parking area.

"We are not asking for people to recreate that, but use it as a bit of inspiration because it had been such a popular piece," Sanders said.

The Winston-Salem landscape group, Roots First, has designed a piece to be installed along Smith Street between Prescott and Spring streets, between the Meeting Place Cornerstone and LoFi Park. Sanders expects it by year's end.

The archways will go over the Greenway.

Smith Street in that section carries a lot of fast-moving traffic. "We felt we need something to soften and create a little more green space and a little more of a protected kind of feeling there," Sanders said.

And for those who see the road construction on Hill Street — between Battleground Avenue and Mendenhall Street and less than a block from the Meeting Place Cornerstone  — that's not part of the Downtown Greenway, Sanders said.

It's where three other city greenways — Lake Daniel, Latham Park and eventually the Atlantic and Yadkin — come together, she said.

What: Webinar with Freedom Cornerstone artist Radcliffe Bailey and Ayla Amon, contract curatorial assistant at the Smithsonian National Museum of African American History and Culture and visiting lecturer at UNCG.

The Downtown Greenway displays 19 completed artworks, with 12 more to come:

• Cornerstones: Three completed ("Gateway of the Open Book" by Brower Hatcher, "Meeting Place" by Harries & Heder Collaborative, "Woven Works Park" by Randy Walker). The fourth and final cornerstone will arrive in 2020-21; artist Radcliffe Bailey has been selected to work on the theme of freedom.

• Neighborhood benches: Four completed ("5 Points" by Gary Gresko in Warnersville, "Inside Out" by Ben Kastner and Toby Keeton in Morehead Park, "Home Sight" by Jeannette Brossart in LoFi Park, "Monument to Dignity and Respect" by VanDorn Hinnant in Ole Asheboro (a two-part piece that's not a bench.) Four to be commissioned.

• Bike racks: Seven completed ("ReCycle" by Erik Beerbower, "Park" by Erik Beerbower, "Bike Forest" by Will Kimmel, "The Onion" by Kim Canaan, "Loom" by Randy Walker, "Complimentree Kindnesses" by Darrah Roberson, "The Millstone" by Jim Gallucci). Three to be commissioned.

Words, phrases, images and sounds will help to inspire the new Freedom Cornerstone, to be created by artist Radcliffe Bailey.

Watch Now: Ever wonder what happens to the balloons when the celebration is over?

Downtown Greenway construction is underway at the site of the Freedom Cornerstone at the northeast corner of Murrow and East Gate City boulevards. Its theme is inspired by the city’s role in the Civil Rights Movement.

Typoe, an artist with Primary Flight, turns seven bridge supports into a mural back in 2012 that will be one of four public art pieces in the new Morehead Park section of the Downtown Greenway. Recent bridge repairs eliminated the mural. So greenway planners have put out a call for proposals from North Carolina artists for a replacement artwork. 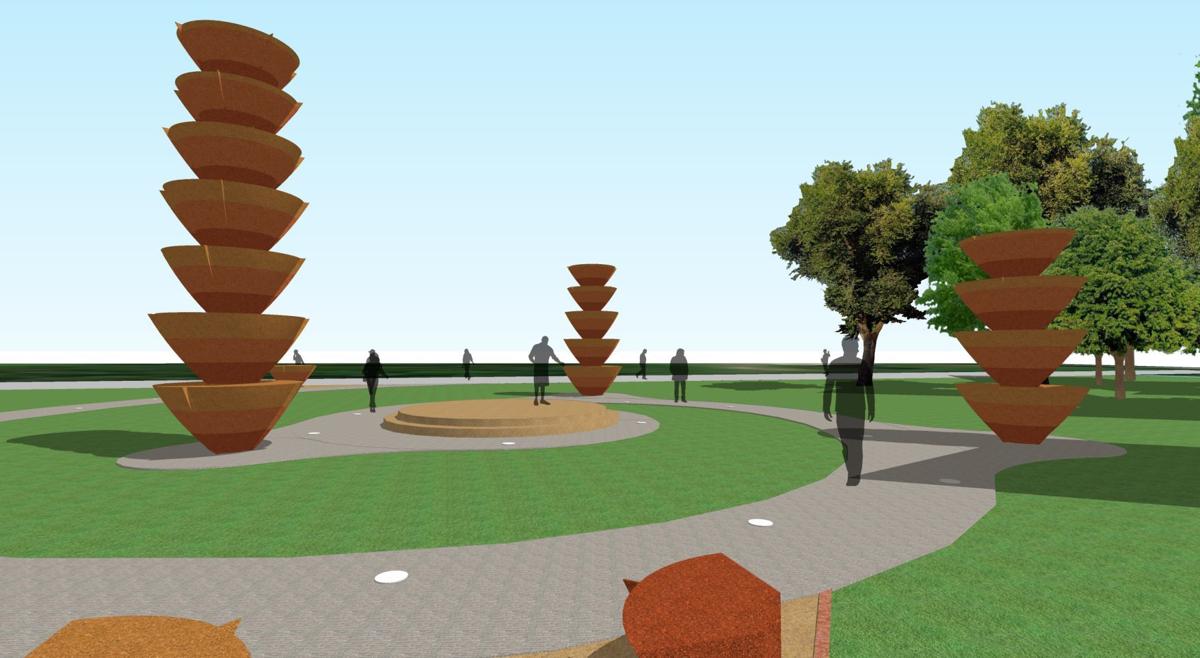 Raleigh artist Thomas Sayre shows his preliminary rendering of his public art for Greensboro's Downtown Greenway at a virtual meeting on Tuesday via Zoom. It shows three cairns, or man-made piles of stones, made from a process called earthcasting.