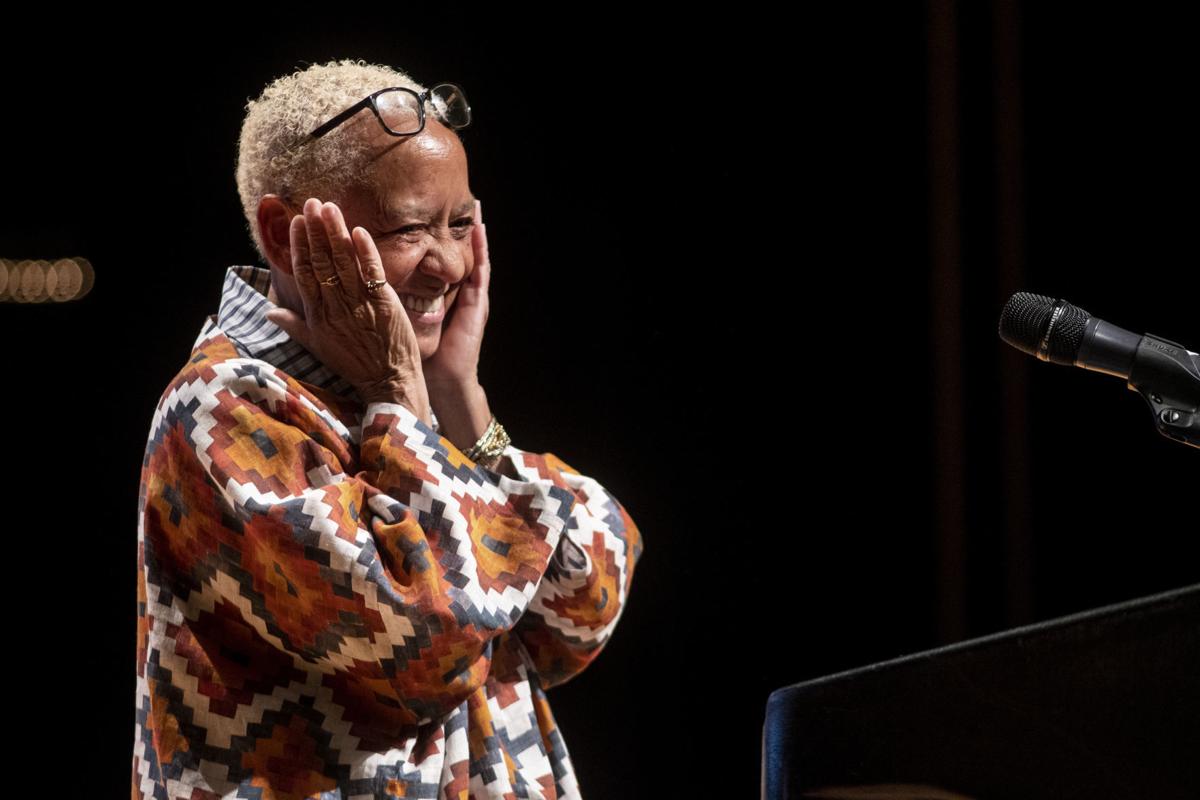 Nikki Giovanni laughs with the crowd during her talk at “Greensboro Bound: A Literary Festival” at North Carolina A&T State University on Sunday. 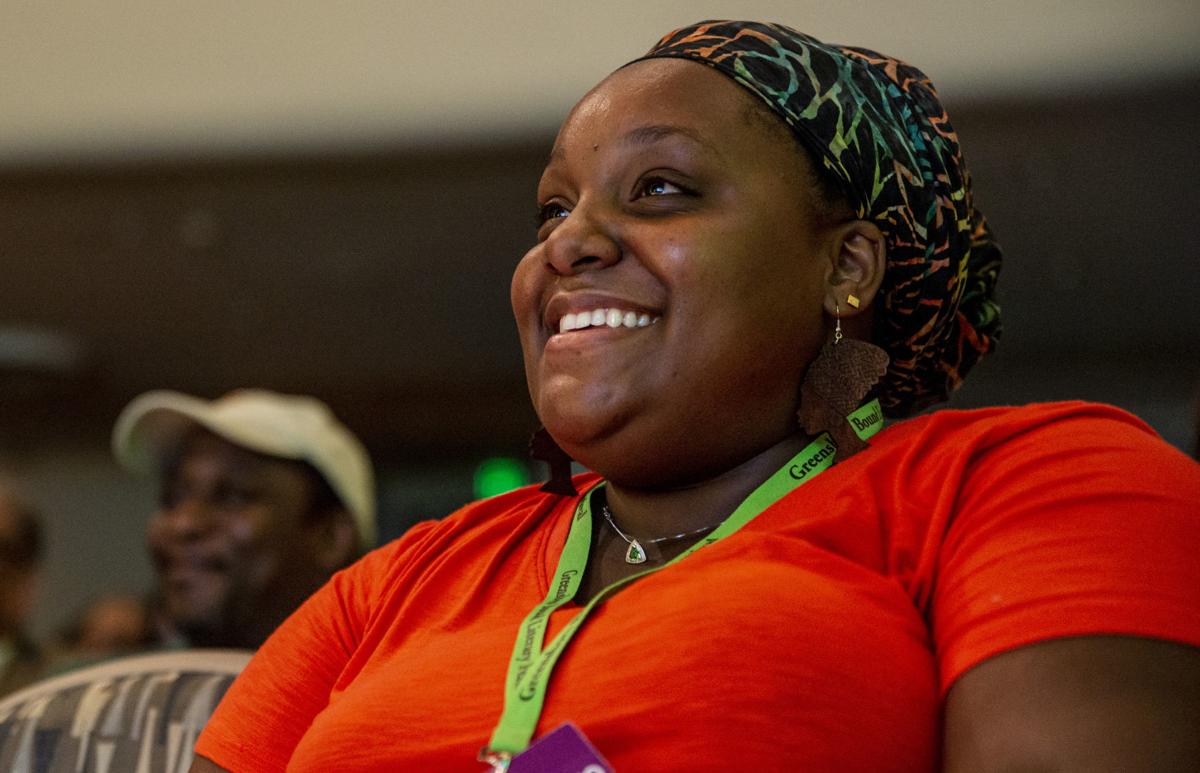 Jasmine Lester listens to Nikki Giovanni during her talk at Greensboro Bound: A Literary Festival at A&T University on May 20, 2018 (photo by Khadejeh Nikouyeh) 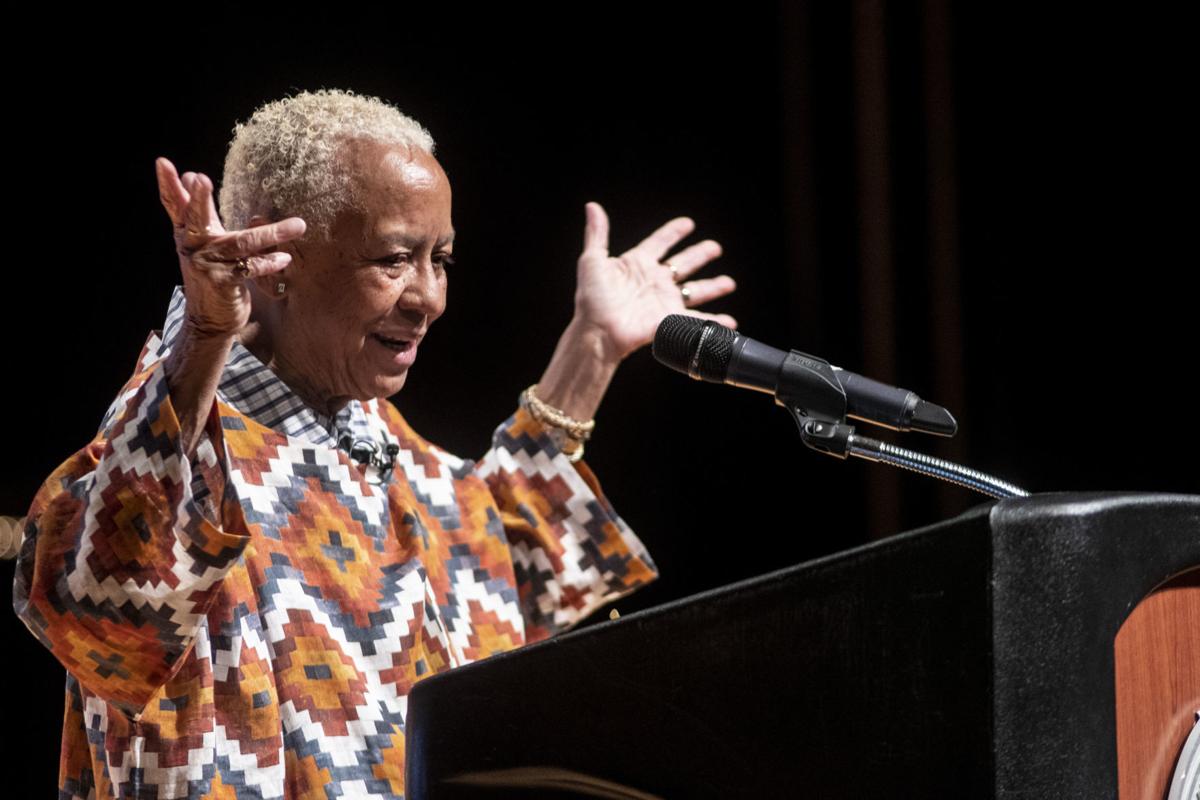 Nikki Giovanni during her talk at Greensboro Bound: A Literary Festival at A&T University on May 20, 2018 (photo by Khadejeh Nikouyeh) 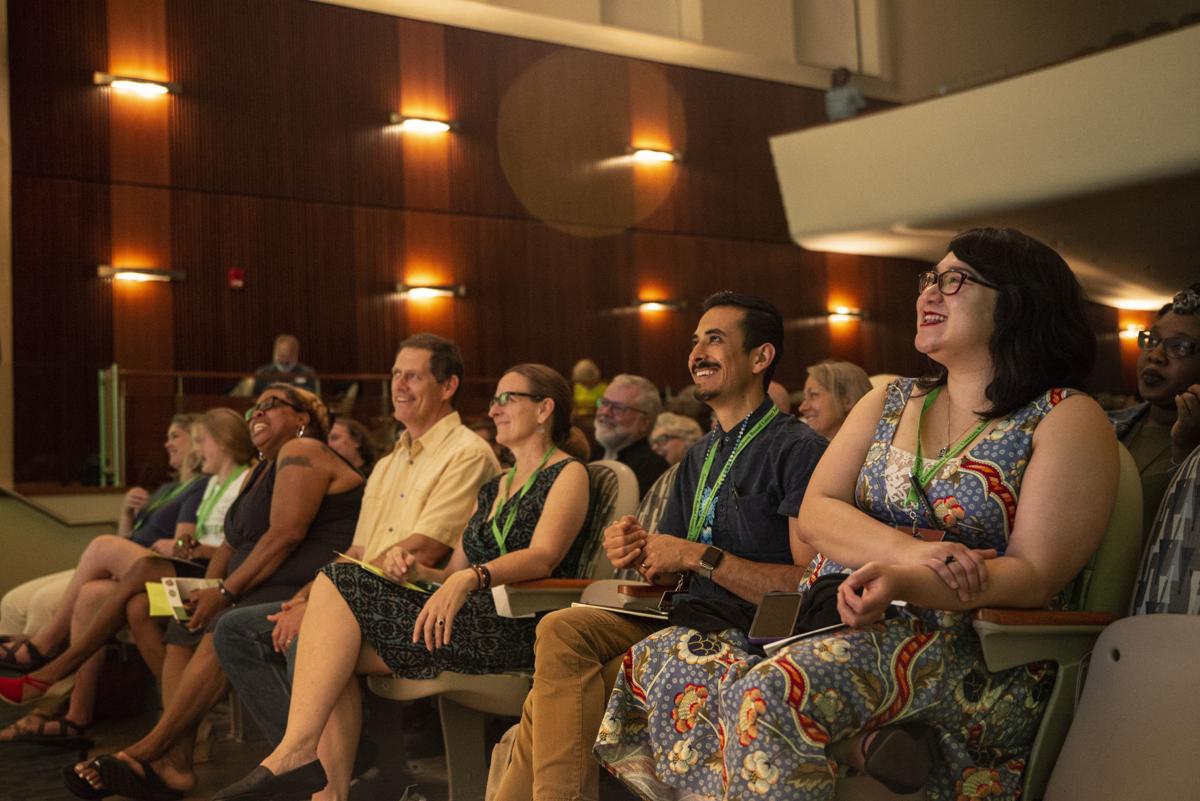 The crowd laughs with Nikki Giovanni during the sold-out finale of the literary festival. 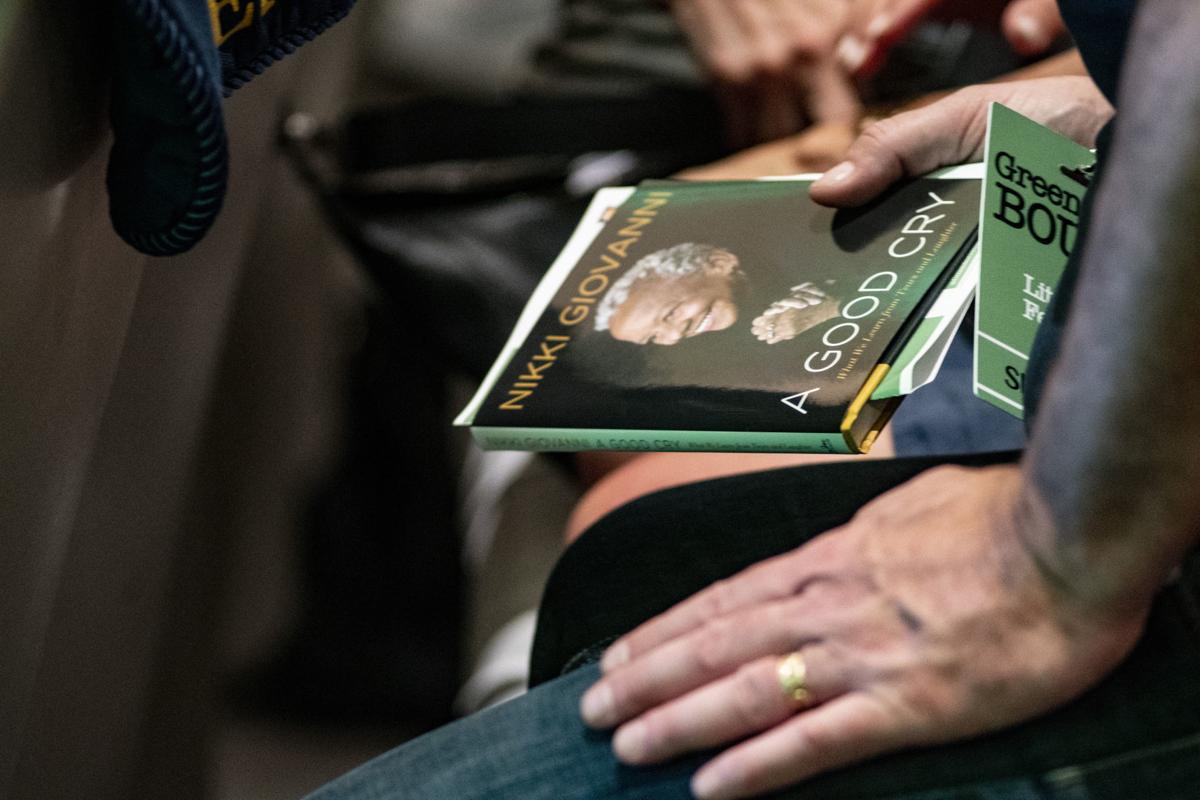 A man holds a copy of Nikki Giovanni’s “A Good Cry” at North Carolina A&T on Sunday.

GREENSBORO — The inaugural Greensboro Bound literary festival is one for the books.

The city’s first annual book festival ended its three-day run on Sunday, after talks by more than 70 authors at mostly downtown venues.

“The first thing I’m thrilled about is just how much people have loved every event,” said Brian Lampkin, the organization’s board president and a co-owner of downtown’s Scuppernong Books.

All events were presented free of charge, thanks to sponsors and donors who contributed more than $100,000.

“Obviously we would like more,” Lampkin said about attendance. “But for a first-year festival, it’s great.”

The book fest will return again next year, from May 17 to 19.

Steve Colyer brought the book festival idea to Scuppernong after he moved to Jamestown from Miami, where he participated in the Miami Book Fair. Festival planning began at Scuppernong 16 months ago.

The festival ended Sunday with a sold-out talk by poet Nikki Giovanni at Harrison Auditorium on the N.C. A&T campus.

Giovanni, one of America’s pre-eminent poets, has been a Grammy Award nominee and a finalist for the National Book Award. She has written three New York Times and Los Angeles Times bestsellers and teaches creative writing and African-American literature at Virginia Tech.

In her latest collection of poems, “A Good Cry: What We Learn From Tears and Laughter,” she reminisces about the people and experiences that made her who she is.

In a speech that evoked frequent applause, Giovanni, 74, praised her generation for breaking down segregation.

She then directed remarks to the younger generation.

“Some of you who are young, one day you are going to run for governor. What I want the governor of North Carolina to do is to make the license plate say ‘Greensboro Four,’ ” she said, referring to the four A&T freshmen who started the 1960 sit-in movement to end segregated lunch counters.

“We took segregation away, and now we’re living in an unsegregated world,” she said. “You’re going to have to figure out how you want to live with racism. What do you want to do about it?”

Over three days, the literary festival attracted writers — from emerging to well-established authors such as Giovanni — for talks, readings, panel discussions, workshops, exhibitions, and book signings.

Among the most popular talks were Machado, Smith and Michael Parker, and Jabberbox Puppet Theatre’s performance of a Wallace story.

Sunday’s schedule included picture book and cookbook authors, an author discussion on religion and mental health, a poetry panel, and panels on what it means to be a writer from the feminist, transgender and gender fluid and Latinx communities.

“There are so many good things happening that it’s hard to choose,” Theresa Miller said as she stopped in the Greensboro Cultural Center, the festival’s hub. “But that’s a good problem to have.”

Miller had attended three author talks on Saturday. “I am impressed with the quality of the writers,” the Greensboro woman said. “Some I had not heard of, and will definitely be reading.”

She was on her way to Sunday’s talk by Beth Macy, an award-winning journalist from Roanoke, Va. and New York Times best-selling author.

Macy wrote the nonfiction books “Factory Man” and “Truevine.” Her third book will be published in August titled, “Dopesick: Dealers, Doctors and the Drug Company That Addicted America.”

Macy said later that she was impressed by the festival, its audiences and other writers.

“It’s such a vibrant group of readers,” Macy said. “I’ve gotten the best questions here ... I met so many cool writers here.”

Nearby, audience members placed orders for her book.

Book sales were good, and that will help attract authors next year, said Steve Mitchell, a co-owner of Scuppernong Books and a writer himself.

Organizers likely will fine-tune and adjust the festival in 2019 if needed, Mitchell said.

“But I don’t think that we anticipate any major changes,” Mitchell said. “I think we’re kind of in the right place.”

'It's time': This Greensboro agency put a 'dent' in fighting domestic abuse, but no more

Larry Stone: Here's what the Supreme Court's ruling against the NCAA means for the financial future of college athletes

Nikki Giovanni laughs with the crowd during her talk at “Greensboro Bound: A Literary Festival” at North Carolina A&T State University on Sunday.

Jasmine Lester listens to Nikki Giovanni during her talk at Greensboro Bound: A Literary Festival at A&T University on May 20, 2018 (photo by Khadejeh Nikouyeh)

Nikki Giovanni during her talk at Greensboro Bound: A Literary Festival at A&T University on May 20, 2018 (photo by Khadejeh Nikouyeh)

The crowd laughs with Nikki Giovanni during the sold-out finale of the literary festival.

A man holds a copy of Nikki Giovanni’s “A Good Cry” at North Carolina A&T on Sunday.