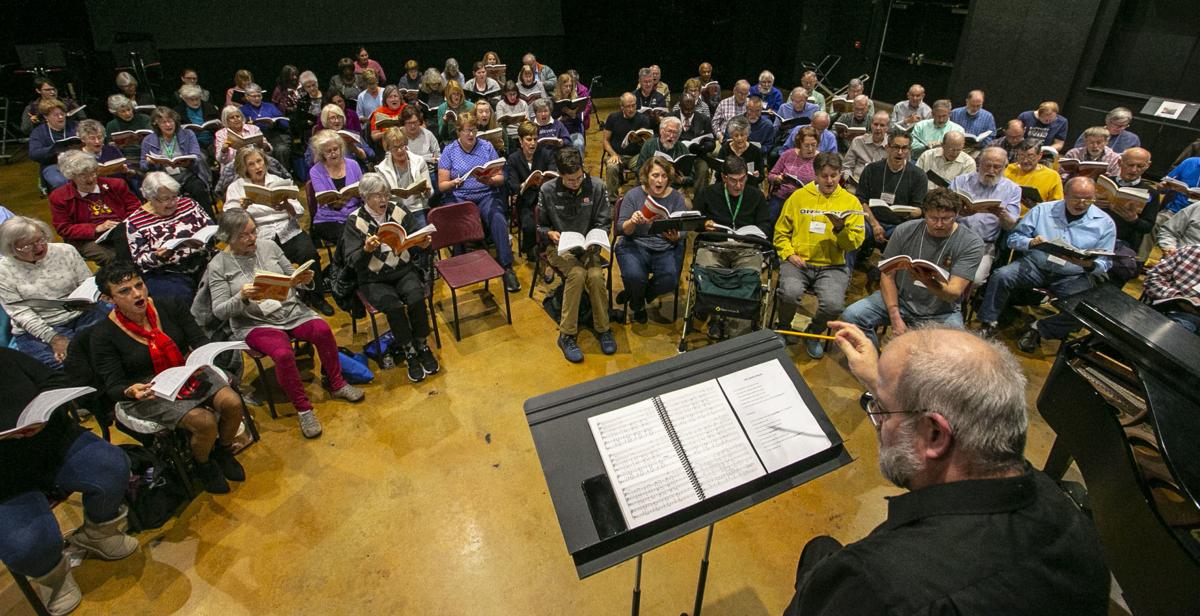 Jon Brotherton conducts the Choral Society of Greensboro during a rehearsal of “Messiah” in the Van Dyke Performance Space in the Greensboro Cultural Center in downtown Greensboro on Tuesday. 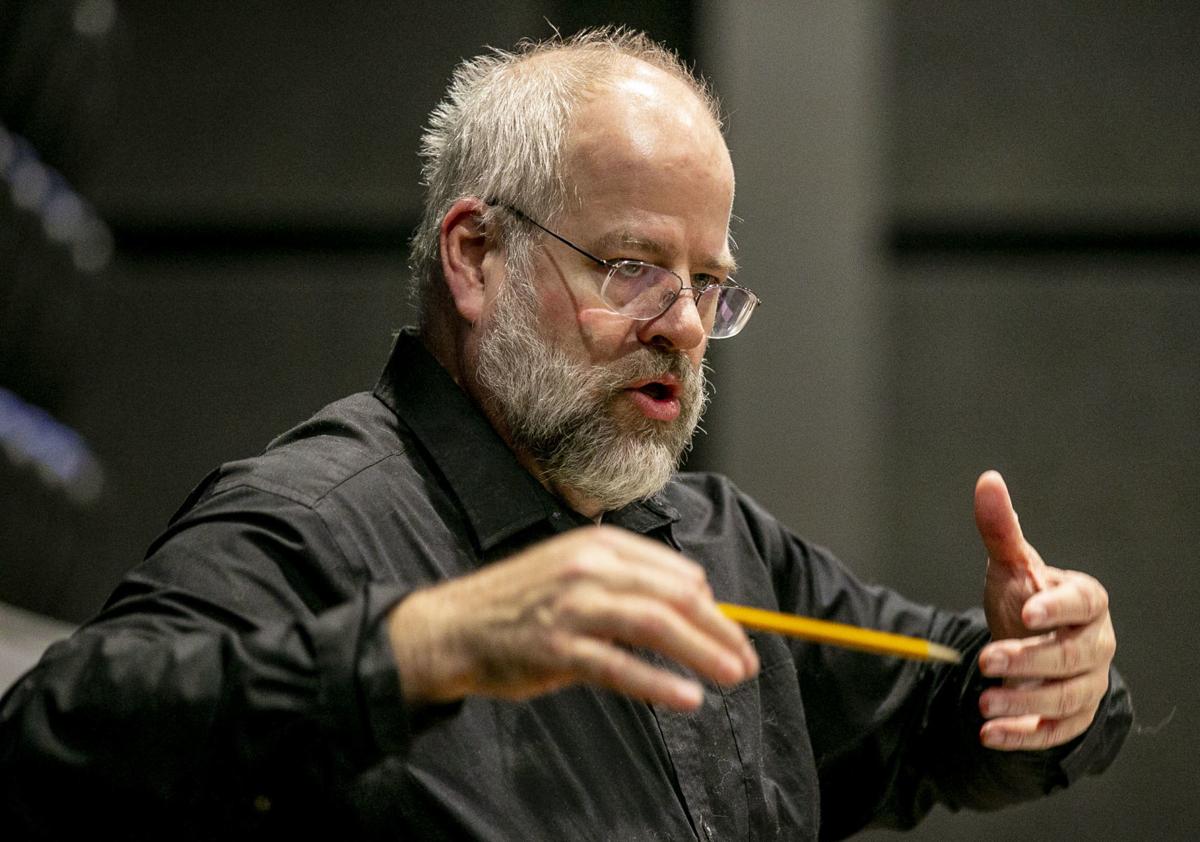 Jon Brotherton conducts the Choral Society of Greensboro during a rehearsal of “Messiah” on Tuesday. The volunteer community chorus will sing “Messiah” at First Baptist Church on Friday. 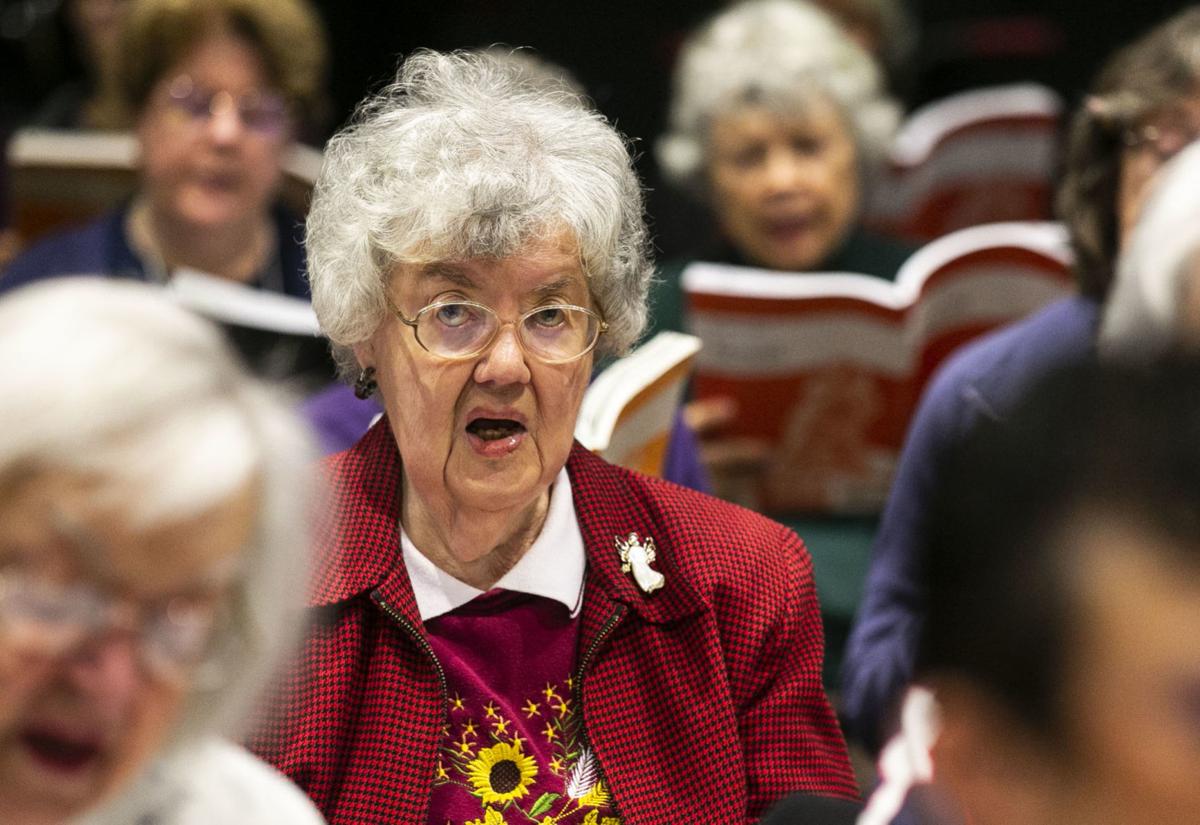 Thelma Greeson, 89, hasn’t missed a performance since the Oratorio Singers began singing “Messiah” in 1954. Here she sings with the Choral Society of Greensboro during a rehearsal on Tuesday. Greeson says she’s glad that she joined the Choral Society performance. “It’s just part of Christmas,” she said.

GREENSBORO — A year ago, it seemed as if the city had seen its last performance of "Messiah."

Jon Brotherton and the Choral Society of Greensboro have stepped in to help to fill the void.

On Friday, the volunteer community chorus — conducted by Brotherton and sponsored by the Music Center of City Arts — will sing “Messiah” at First Baptist Church, 1000 W. Friendly Ave.

The Choral Society invited members of the Greensboro Oratorio Singers to join them, and 21 did. Another seven already had been singing with both groups.

"I cannot say enough about how their participation has made this performance special," said Tom Wright, Choral Society president.

They will perform the musical composition from 1741 that traces the birth, suffering, crucifixion and resurrection of Christ.

But there's much more.

Even with a few sections omitted, the free performance will run about two hours, plus a 10- to 15-minute intermission, Brotherton said.

"No matter how many times I have heard or performed 'Messiah,' there is always exhilaration in singing the familiar choruses, from the melismatic canon in 'He Shall Purify,' to the great waves of sound in the 'Amen Chorus,'" Tom Wright said.

This marks the 66th consecutive performance of "Messiah" for chorus member Thelma Greeson, a former member of the Greensboro Oratorio Singers.

Greeson actually began singing “Messiah” in 1947, in a performance sponsored by the Euterpe Club.

She might have missed a “Messiah” performance or two with the Euterpe Club, she said. But none since then.

She has sung the music so many times, she wore the cover off her original score.

This year, Greeson and other chorus members use a new score, the New Novello Choral Edition.

She's glad that she joined the Choral Society performance. "It's just part of Christmas," she said.

Since its founding in 1983, the Choral Society has presented several concerts annually, with an emphasis on major classical works.

Membership is open to all, although the ability to read music and some experience in choral singing are desirable.

The Choral Society plans to make "Messiah" an annual event.

"The Greensboro Oratorio Society performed Messiah each year as a gift to the community," Tom Wright said, "and the Choral Society of Greensboro intends to extend this important tradition."

Come fall 2020, there will be two major separate productions of "Messiah."

The Greensboro Symphony Orchestra already had planned for its new Master Chorale to sing “Messiah” with the orchestra on Dec. 10, 2020.

The Oratorio Singers began in 1951 as the Community Chorus of Greensboro, 20 singers who wanted to perform sacred choral music not usually sung in churches.

It became the Greensboro Oratorio Society in 1953, with Don Trexler as its head.

Several years ago, it substituted “singers” for “society” in its title to clarify its purpose.

But in recent years, the number of chorus and audience members declined for the group's other concerts. Ultimately, the Oratorio Singers decided to disband.

When the opportunity came along to continue "Messiah" with the Choral Society, she took it and passed the word to other former Oratorio Singers.

"I wanted to continue the tradition," Royster said.

This will mark her 12th annual performance of "Messiah."

"It’s been fun to just sing and not have to do anything else," she said.

When she walked into rehearsals, she knew not only former Oratorio Singers but other singers she had met over the years.

"I felt very welcome," she said.

Expanding a chorus takes adjustments. More platforms for singers have been added to the performance space.

Although the Choral Society has not performed "Messiah" before, Brotherton has conducted it several times elsewhere.

About 85 to 90 percent of members have sung it with other choral groups.

That gave the Choral Society a head start in the rehearsal process, Brotherton said.

"It give us an opportunity to polish it more, to work on the cohesiveness of it a little more than we might be able to with a brand new piece," Brotherton said.

Brotherton then moved on to "He Trusted in God" and "Lift Up Your Heads" from the second part of the piece.

He gave the chorus a thumbs-up.

In fall 2020, Greensboro arts organizations will offer not just one, but two separate major productions of Handel's "Messiah."

Choral Society of Greensboro to take over 'Messiah' performances

With the disbanding of the Greensboro Oratorio Singers, the Choral Society of Greensboro will take over annual performances of Handel's sacred masterpiece, "Messiah."

What: Handel's "Messiah," presented by the Choral Society of Greensboro, conducted by Jon Brotherton.