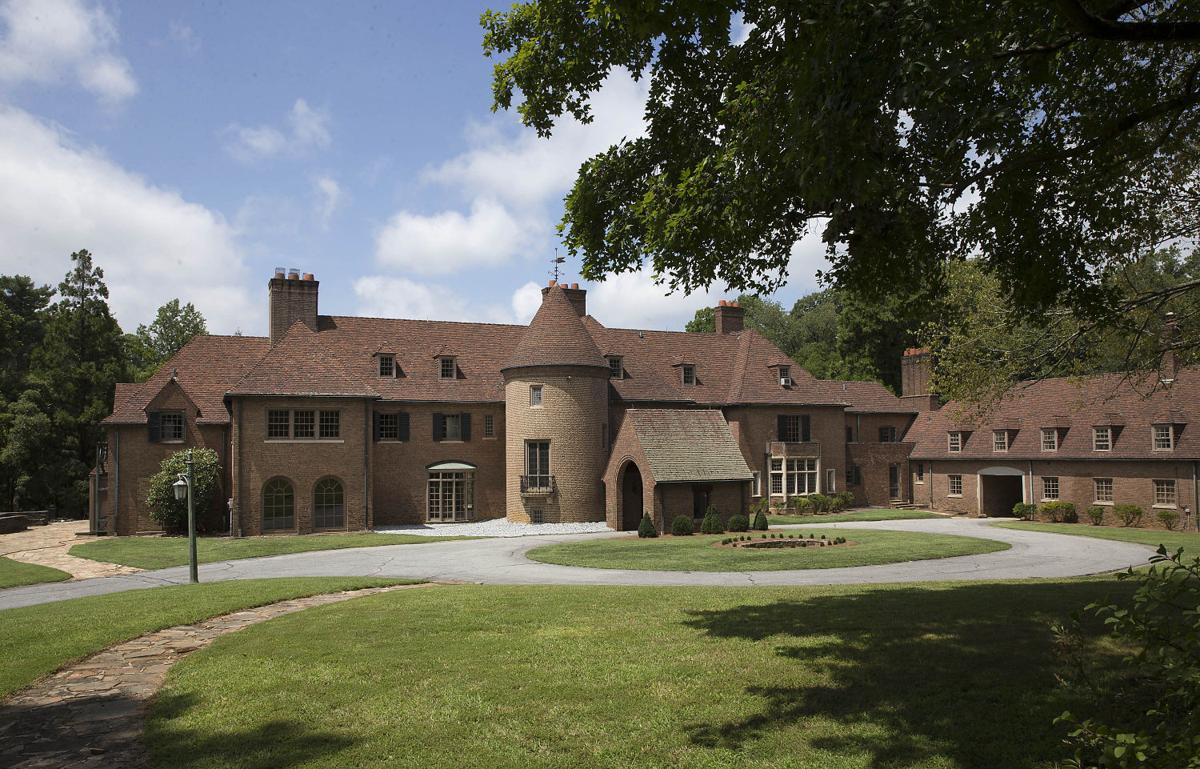 The Adamsleigh estate, built in 1930, near Sedgefield Country Club, shown in 2016. 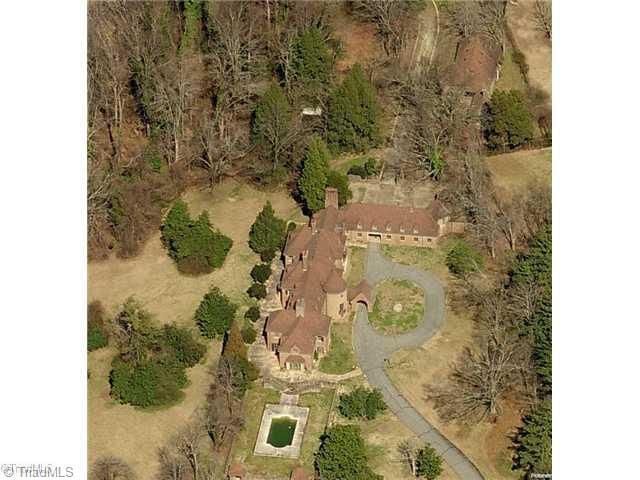 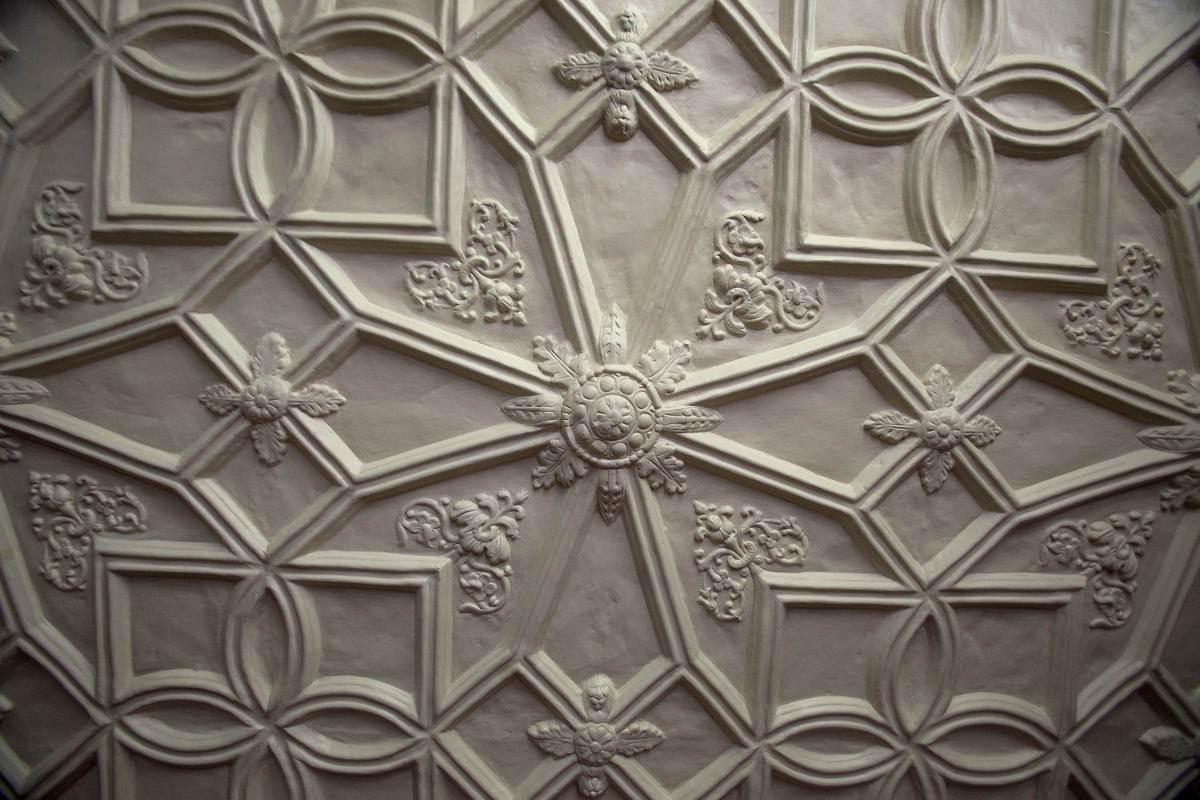 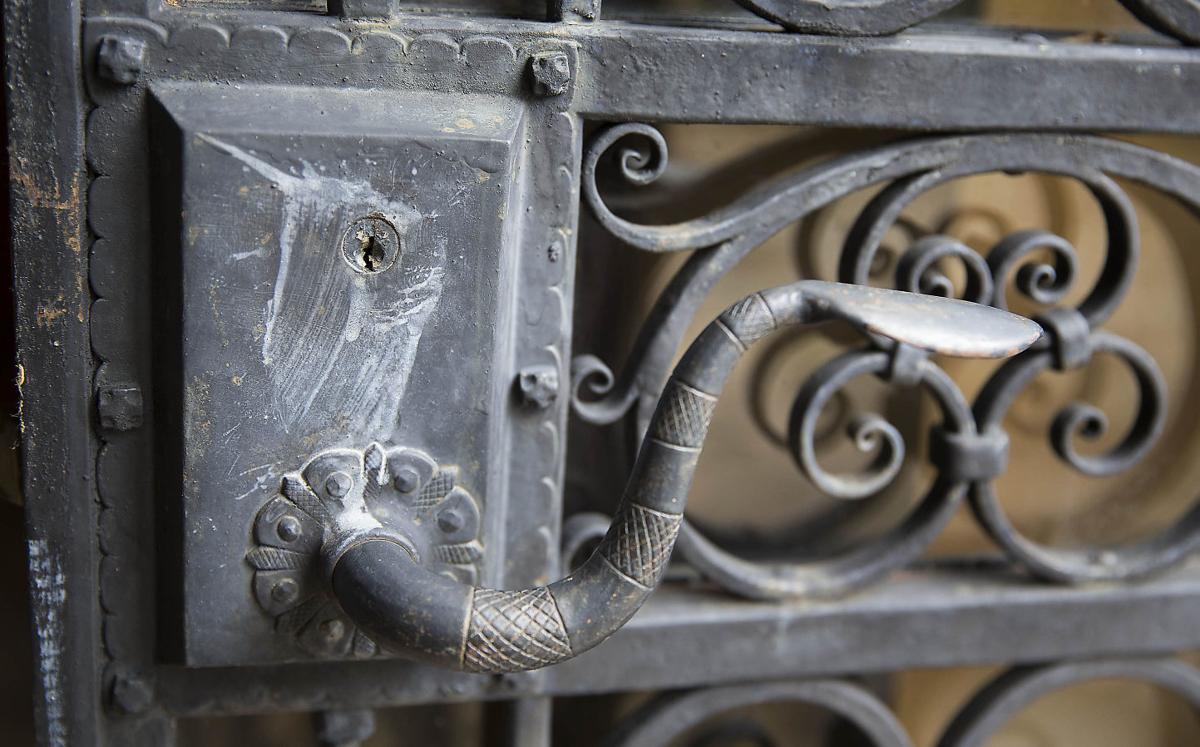 Custom made wrought iron is throughout the house, including door handles. Benjamin Briggs, executive director of Preservation Greensboro, considers it Greensboro’s grandest estate, although it’s technically outside city limits. 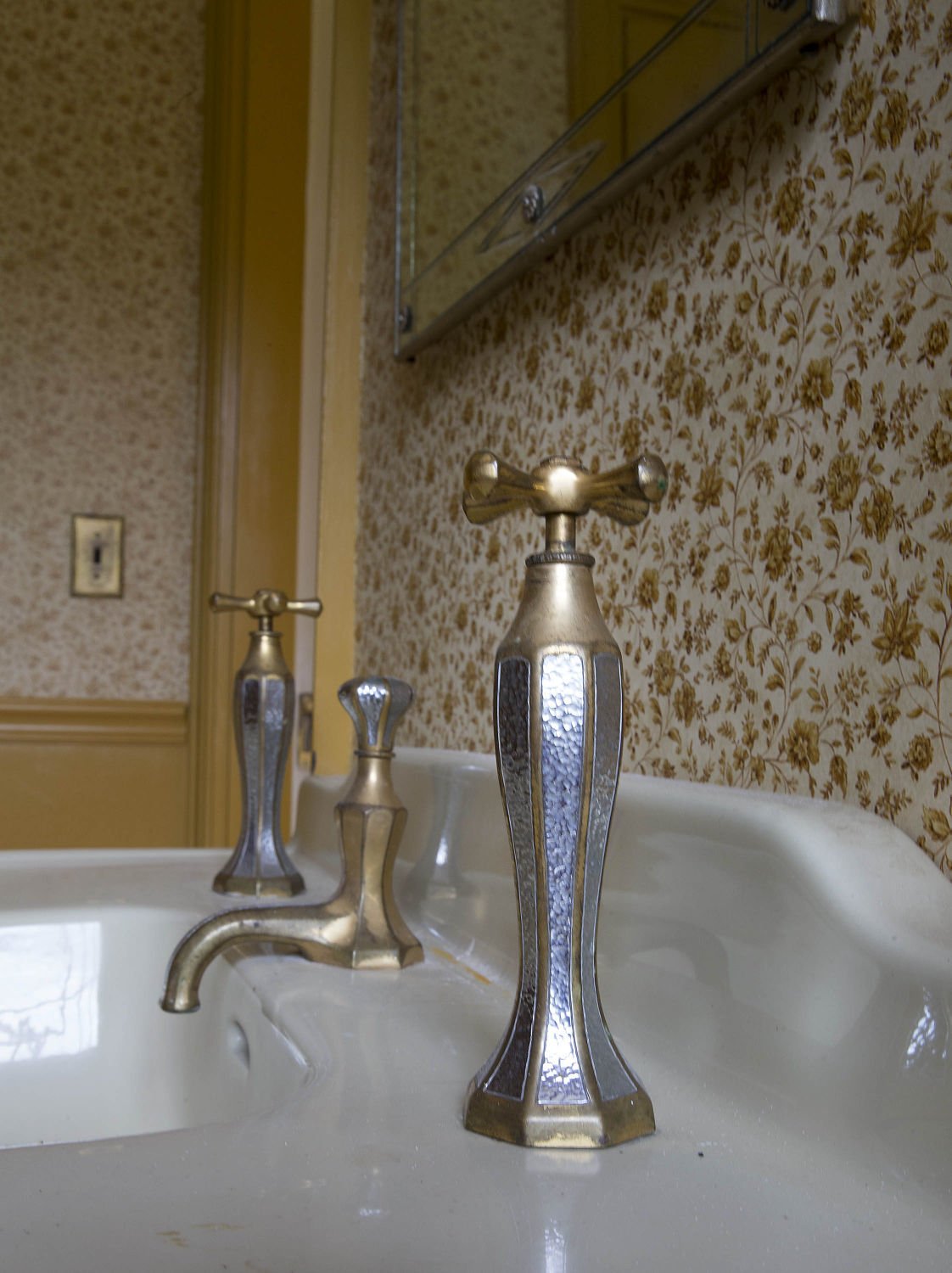 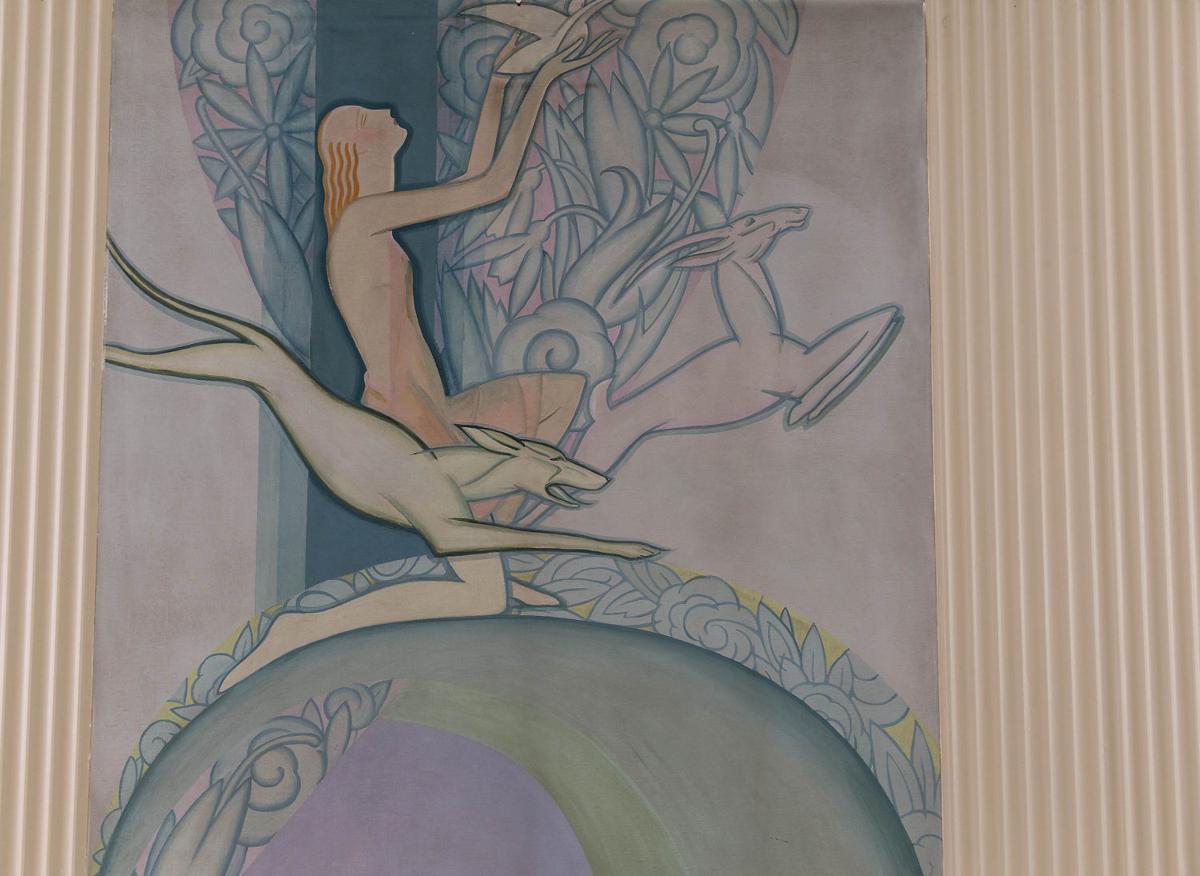 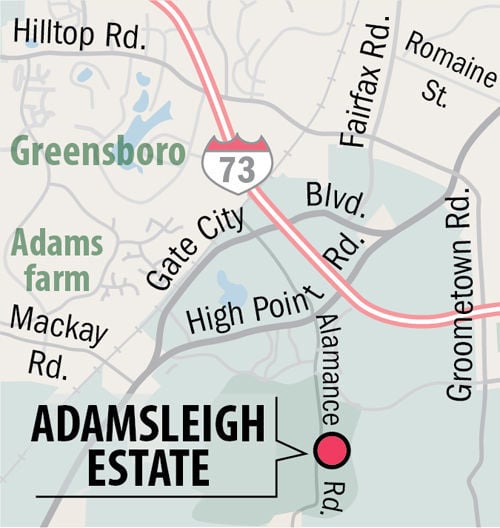 GREENSBORO — After more than a decade on the market, the sprawling Adamsleigh estate has new owners.

As they examine options for the property, there is a possibility that they will demolish its 90-year-old, brick Tudor-style mansion — a prospect that upsets historic preservationists.

“It’s something unique to our community and I would hate to see it vanish,” said Briggs, who runs the nonprofit organization that preserves historic sites.

To Briggs, Adamsleigh illustrates the challenge of protecting and preserving a historic property when it is privately owned.

Under North Carolina laws, a property can’t be listed as a historic landmark or on the National Register of Historic Places without an owner’s consent. Adamsleigh’s prior owners opted not to go that route, Briggs said.

In some cases, Briggs added, a property could be designated by elected officials without owner consent.

But Briggs is not aware of that occurring in North Carolina. It also creates an antagonistic relationship between preservationists and the community, and could be challenged in court.

The Harrises bought the property at 3301 Alamance Road with plans to move there from High Point with their five children.

Jason Harris said he hasn’t decided yet whether to demolish the mansion and build a new family home on the land.

Another option, he said, would be to restore the house for some sort of entertainment venue, then build a separate family home on the property.

“I can respect and appreciate the history that’s there,” said Harris, who has undertaken a major cleanup of the estate’s acreage.

But the house contains asbestos and lacks an HVAC system, he said, and would cost millions to repair.

“It’s not a home that I would want to live in,” Harris said. “It’s not fit for today’s lifestyle.”

In February, he said, he will bring in a designer, architect and land planner to examine the property and plan its future.

Its 33 rooms include 11 bedrooms, 11 full bathrooms and five half-baths. The library was decorated with hand-carved wood, the fireplaces with hand-carved stone. Its rooms feature intricate plaster-molded ceilings and Renaissance era mantles.

Its exterior includes a roof of Ludowici tile, ironwork, two pools, a stable, a stone gazebo and a five-car garage.

Most recently, it was owned by the heirs of Allen Watkins, Adams’ son-in-law, who lived there until his death in 2003. A caretaker has occupied the property.

It hosted a designer showcase in 2013, and the 2014 filming of “The Disappointments Room,” a movie starring Kate Beckinsale.

The property’s asking price has dropped from about $6 million over the years, Jason Harris said. It was $4 million in 2015, making it the highest-priced home for sale in Guilford County.

The Harrises were among three prospective buyers who submitted sealed bids in the fall to the owners.

Briggs said he likes Harris’ option of restoring the house for an entertainment venue, then building a separate family home on the property.

If the mansion is demolished instead, some of its architectural features could be incorporated into their new home, Jason Harris said.

But Briggs doesn’t favor that option.

“You would simply be retaining fragments of a grand home,” Briggs said.

“It’s a tragedy to lose that house that is an asset that Greensboro and Guilford County have, that other communities don’t have,” Briggs added. “They just don’t build them like this anymore.”

Others have expressed similar opinions on Preservation Greensboro’s Facebook page.

Michael Fuko-Rizzo is among them.

He and Eric Fuko-Rizzo purchased and rejuvenated Hillside, the historic Julian Price mansion in Greensboro’s Fisher Park, which gained national attention on a 2017 dramatic episode of the A&E television reality series, “Hoarders.”

“I have a dozen ideas to save this property and continue its legacy for the next 100 years like we’ve done with the Julian Price House,” Michael Fuko-Rizzo wrote.

Hillside had become packed with piles and piles of items collected by its former owner, Sandra Cowart, who lost the property to foreclosure.

But before she lost the property, Cowart had cooperated with Preservation Greensboro’s work to have the home listed on the National Register of Historic Places.

“Thanks to Sandra, we had tools in place to save Hillside,” Briggs said.

Jason Harris said that he had not anticipated the interest of Preservation Greensboro, the community and the news media in his purchase of Adamsleigh.

“It’s great that there is an interest in the history and architecture in our community,” Harris said. “There’s also reality, and the fact that this place has been an eyesore for years, and someone needs to come in and do something with it.”

“Anybody who was really passionate about preserving it or doing something with it, the thing was on the market for a decade,” Harris added. “They could have done something with it or bought it, or a group could have bought it. It’s a private matter now, and we plan to try to take the right steps to be respectful of that history.”

Hillbrook shares many features with Adamsleigh, the Greensboro mansion designed by the same architect.

For $4 million, you can have Adamsleigh, a secluded estate tucked in the woods of Sedgefield. The front of the 84-year-old home faces Sedgefield Country Club’s 12th hole.

Guilford County school board OKs phased plan for return to school, possibly by the end of October for elementary and middle schools

The Adamsleigh estate, built in 1930, near Sedgefield Country Club, shown in 2016.

Custom made wrought iron is throughout the house, including door handles. Benjamin Briggs, executive director of Preservation Greensboro, considers it Greensboro’s grandest estate, although it’s technically outside city limits. 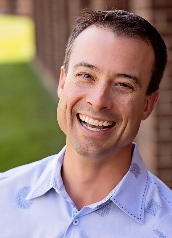