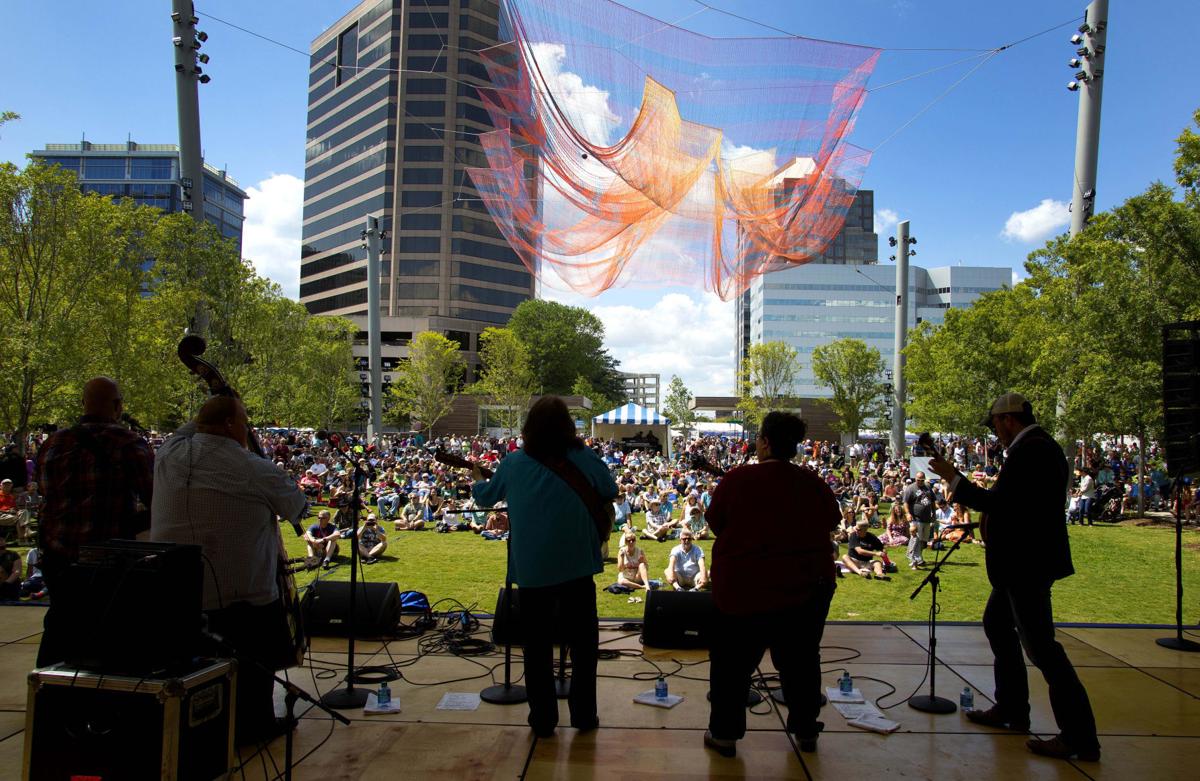 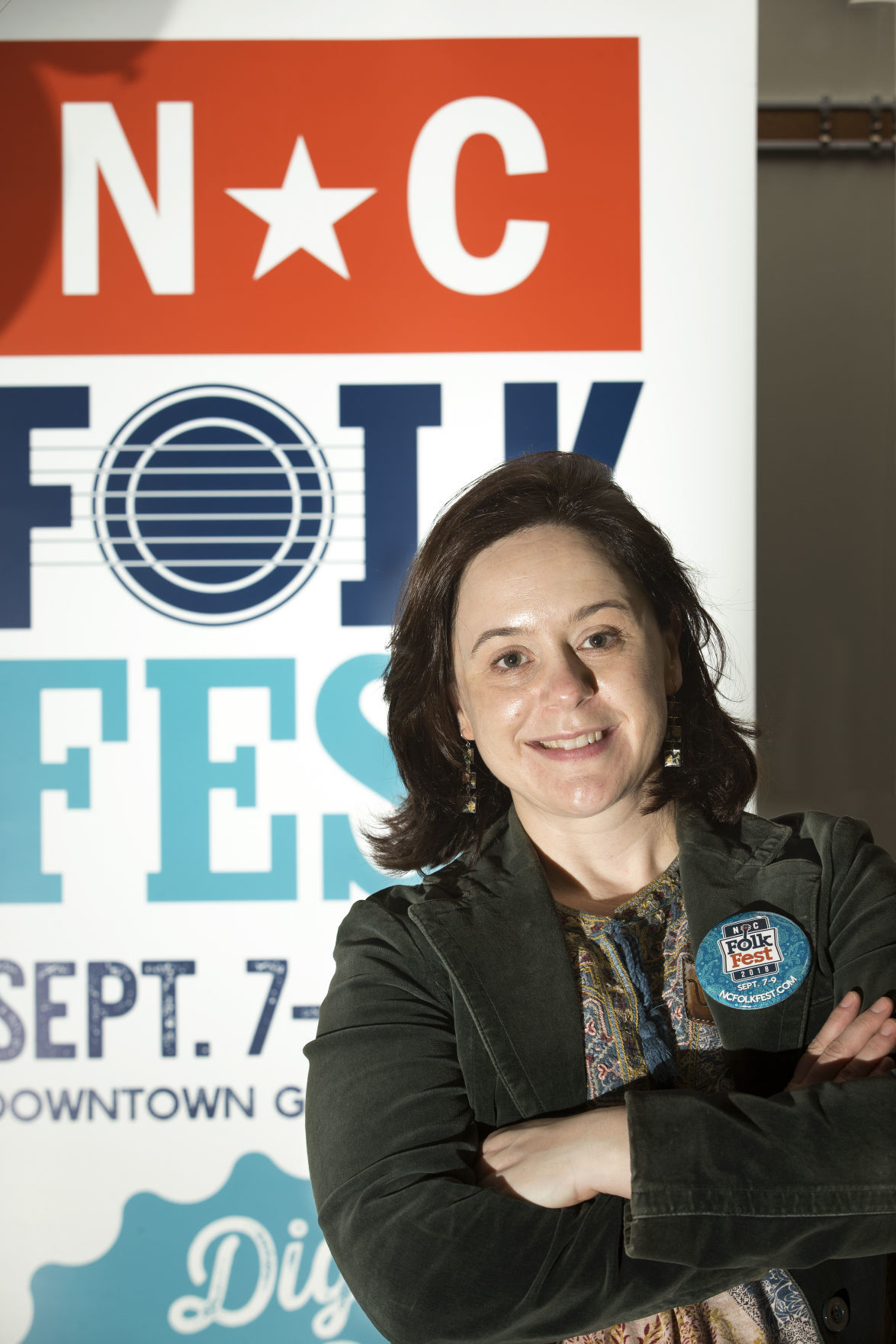 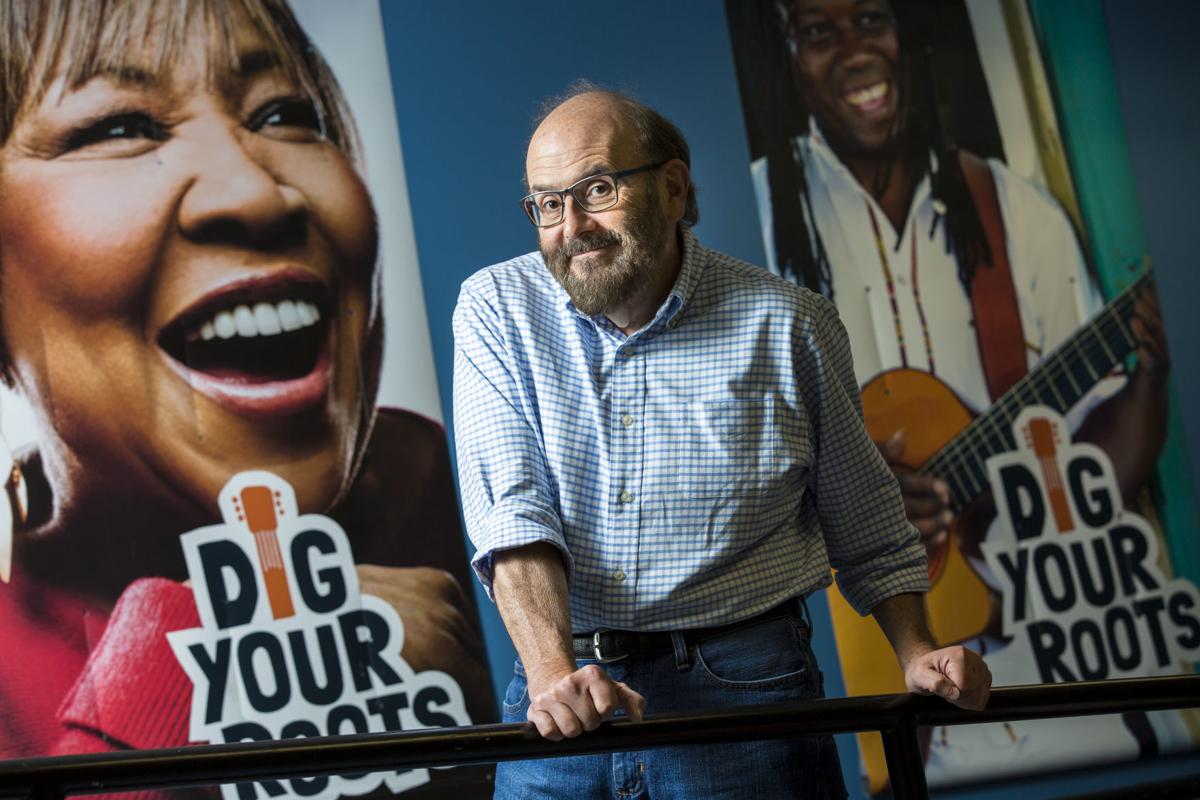 Tom Philion of ArtsGreensboro was instrumental in bringing the National Folk Festival and its successor, the N.C. Folk Festival, to Greensboro. 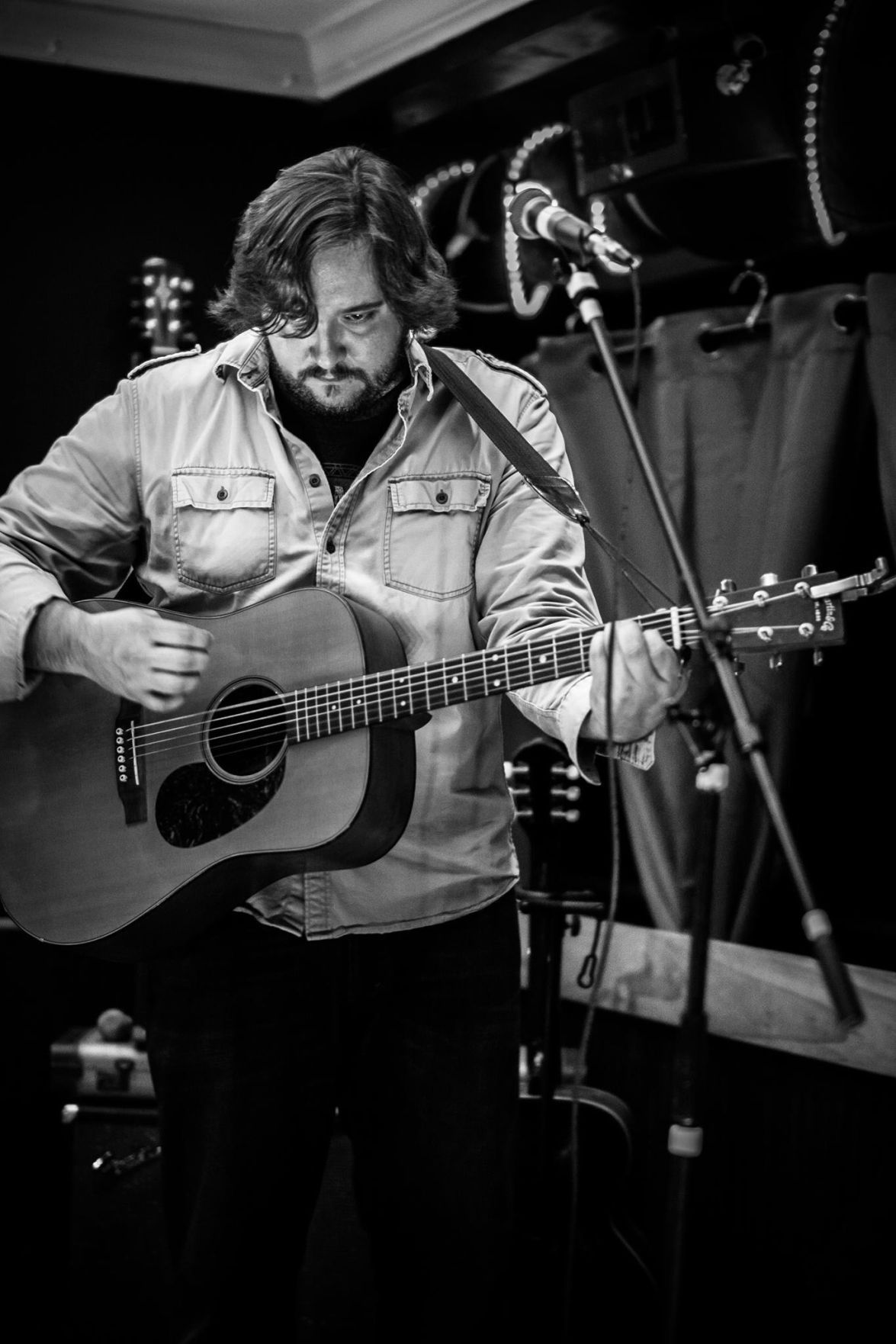 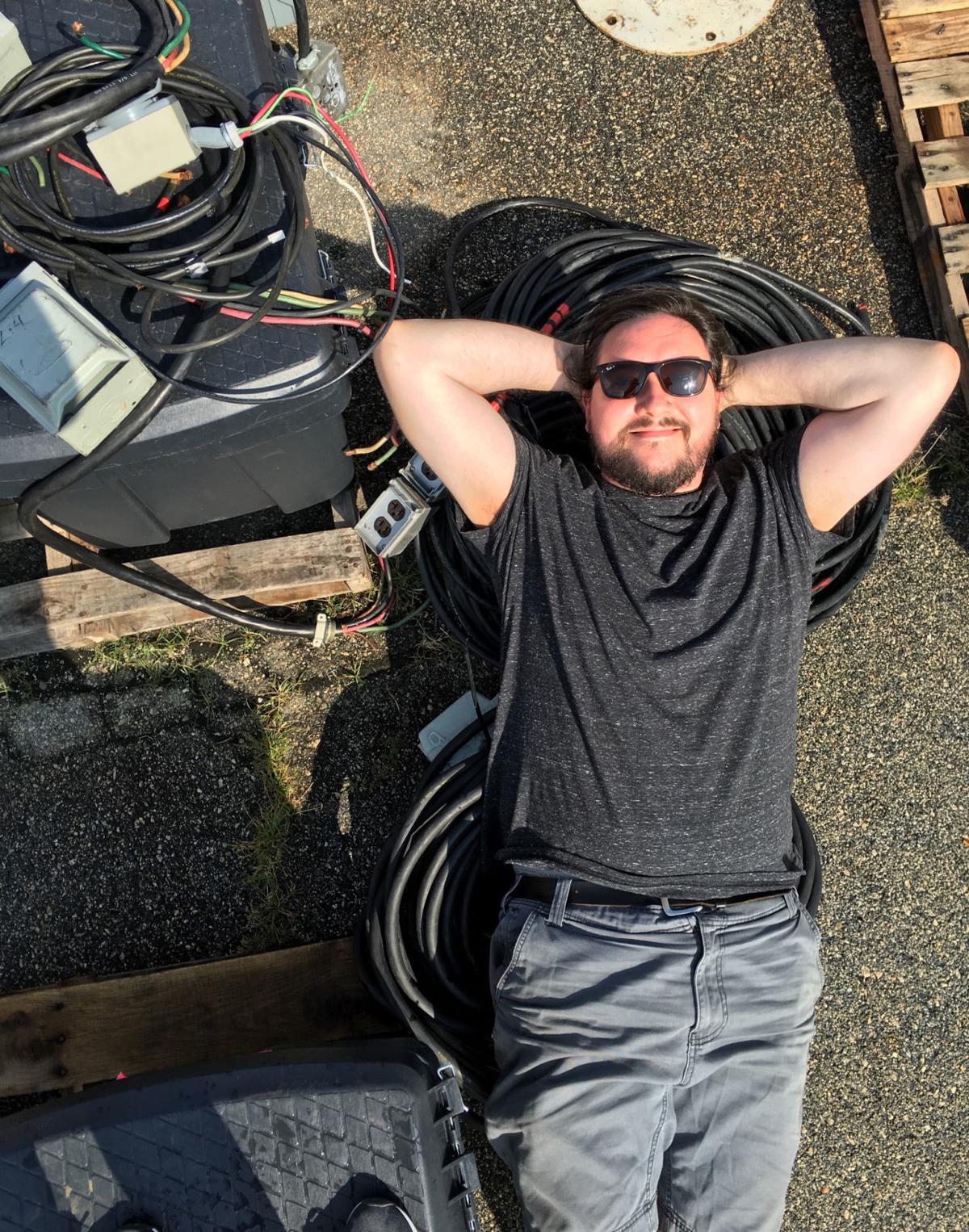 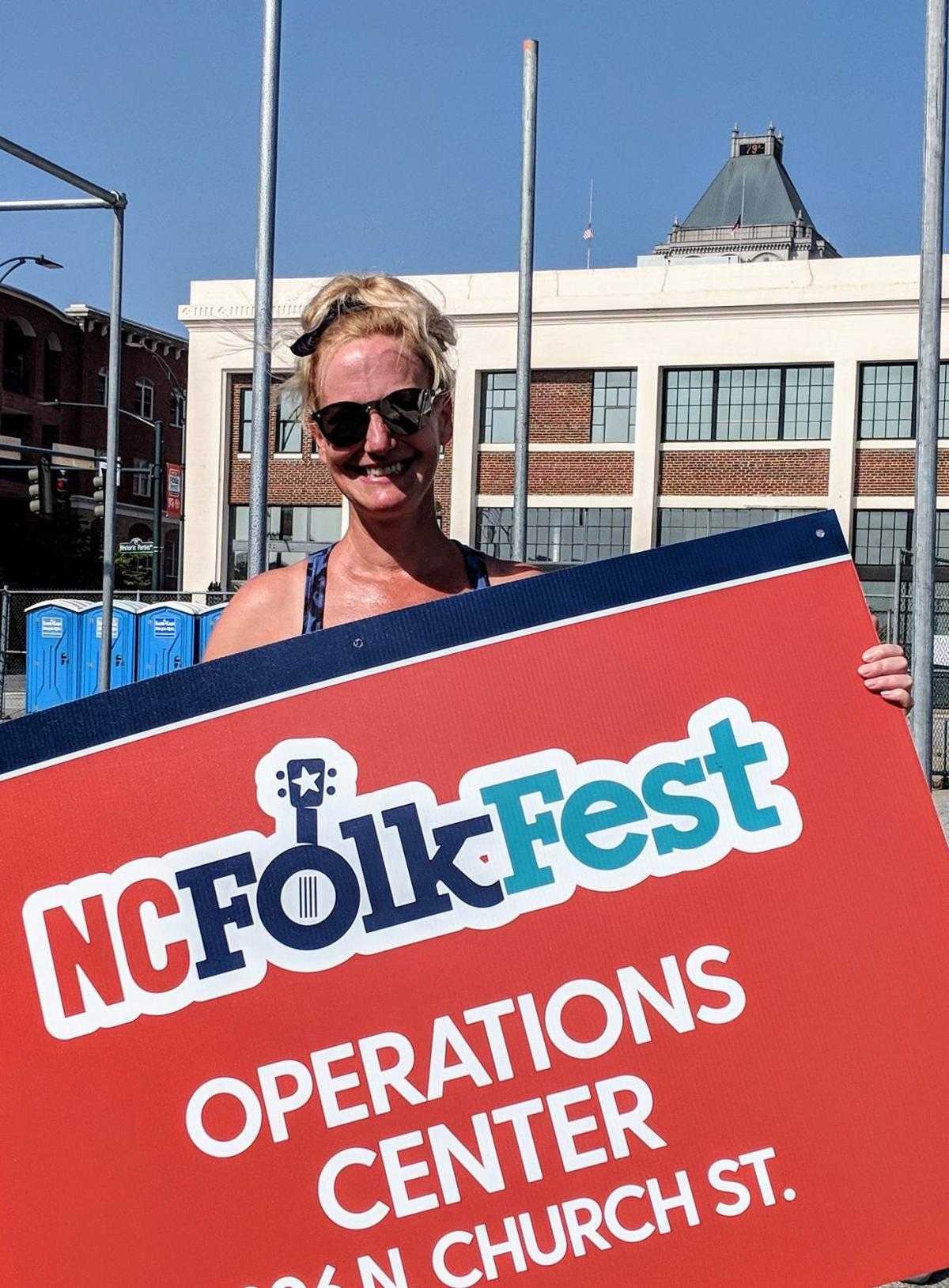 Lynn Witherspoon is one of two operations managers. 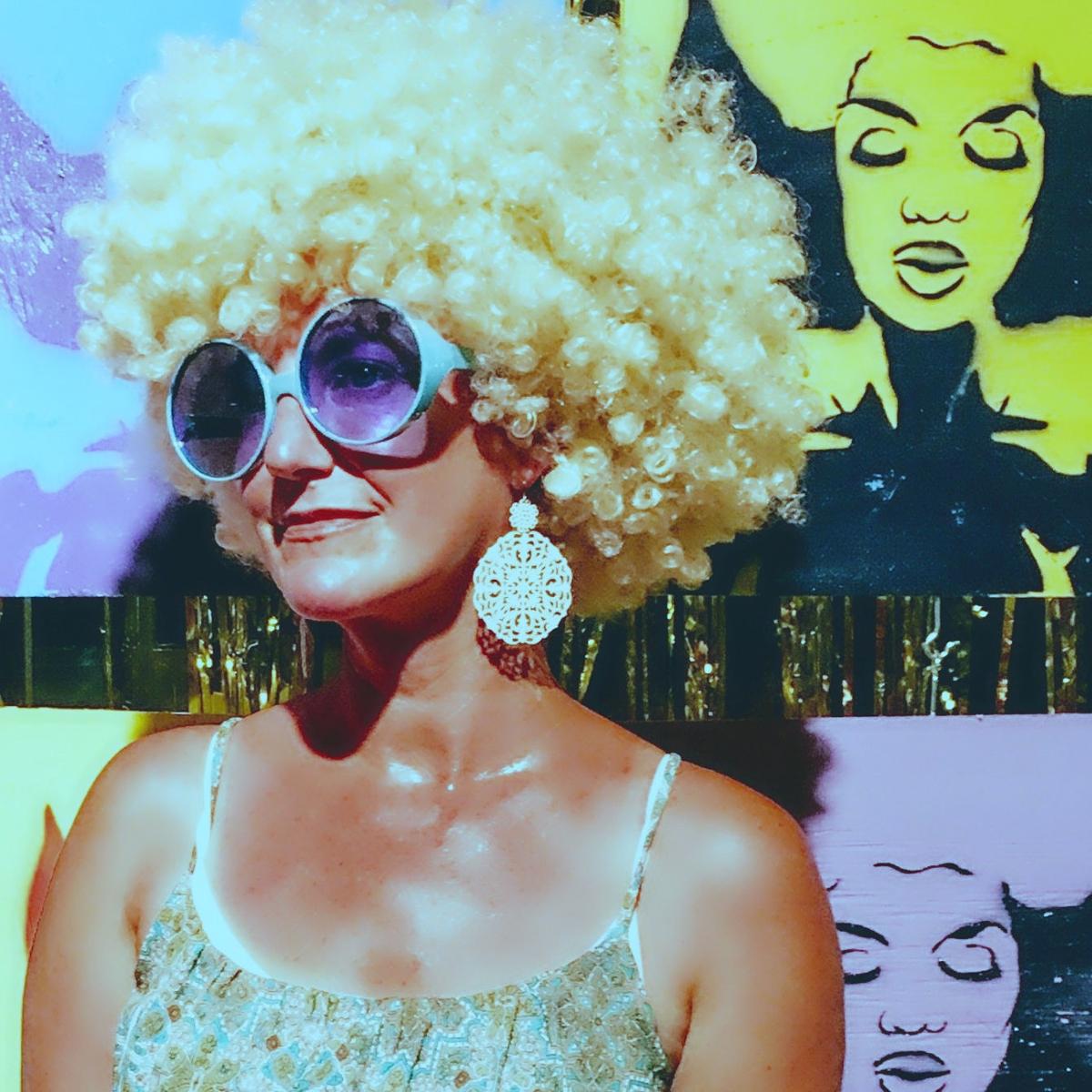 Lynn Witherspoon donned a wig for a 1970s-themed beer release celebration for Foothills Brewing in Winston-Salem. Foothills is the beer sponsor for the 2018 N.C. Folk Festival. 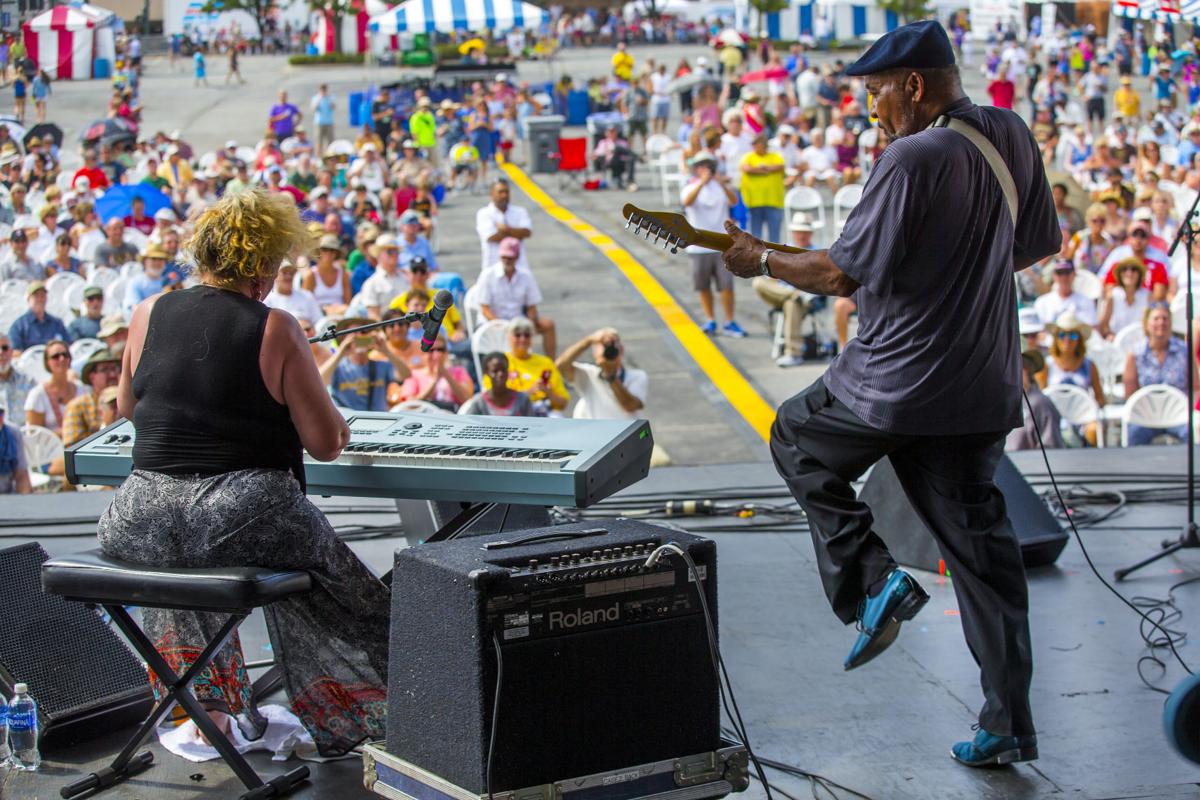 Super Chikan and the Fighting Cocks perform at the 2016 National Folk Festival in downtown Greensboro.

GREENSBORO It takes a lot of people power to produce a free party for 175,000.

Meet some of the key organizers behind the scenes at the N.C. Folk Festival, to be held in downtown Greensboro from Friday through Sept. 9.

Amy Grossmann brought valuable experience when she arrived in Greensboro in late 2014 to direct the National Folk Festival here.

From 2001 to 2006, she was the program manager and logistics coordinator for the National Council for the Traditional Arts, the Maryland-based organization that selected Greensboro to host and co-produce the national festival.

Grossmann worked with host communities presenting the National Folk Festival, as well as with former host cities producing legacy festivals after the national moved on.

That and other jobs, plus three years of directing the national festival in Greensboro, have come in handy as she directs the inaugural N.C. Folk Festival.

“To be successful doing events of this size, this scale, this complexity, you have to be comfortable with a little bit of organized chaos,” Grossmann said. “There’s so much happening, so much stimuli coming at you in any one moment, you have to be able to filter and manage and balance and constantly prioritize.”

Grossmann, 43, also serves as interim president and chief executive officer of ArtsGreensboro. The nonprofit agency helps to build and finance the arts and produces the Folk Festival with the city of Greensboro and other partners.

She expresses gratitude to others who work behind the scenes of the Folk Festival; some paid, many volunteers.

“The festival wouldn’t be what it is without them.”

During eight years as president and CEO of ArtsGreensboro, Tom Philion led the effort to recruit and co-produce the National Folk Festival in the city.

Philion, 66, moved into the role of senior adviser at ArtsGreensboro on July 1. He’ll do that until he retires on Sept. 10, the day after the inaugural N.C. Folk Festival.

But for now, he continues working on festival sponsorships and promotions.

Philion has spent more than 40 years in arts management around the country. That includes his time as president and CEO of Greensboro’s Eastern Musical Festival from 2000 to 2007.

“Tom has had a remarkable impact on this community,” ArtsGreensboro board Chairman Larry Czarda said.

After former assistant city manager Andy Scott found a flier in Nashville about the national festival, Sherrick and Reggie Delahanty called the National Council for the Traditional Arts about bringing the festival here.

The rest, as they say, is history.

“He has been an incredible partner and liaison with the city,” Grossmann said.

Sherrick also volunteers on the operations team for the Richmond Folk Festival in Virginia.

“I also learn quite a bit from seeing how other communities handle the festival,” he said.

For the past three years, Roffman has traveled to Greensboro to work on the National Folk Festival. Now she’s on site for a month.

“In operations, we are pulling together all of the resources that build the physical site of the festival — tents, power, water, Porta-Johns, stages, signs, security, ice and more,” Roffman said. “We are also building the crew, recruiting and pulling in talented people from across the country, and the best here locally in North Carolina.”

“Creating anything that makes quality of life in our community more delightful, that brings people outside with friends and neighbors and music, especially while experiencing new cultures and artistry, well, that is always a worthwhile pursuit,” Roffman said. “I’m lucky my work goes toward something that creates so much fun.”

Witherspoon brings more than a decade of administrative and production experience with festivals.

Grossmann recruited her a few years ago to join the festival’s production crew here. Witherspoon shadowed the national festival’s crew in 2016 and 2017 in Greensboro, as well as the Richmond festival’s crew last year.

“During the folk festivals, I know I am missing amazing music, but there is solace in the fact that I know thousands of people are enjoying it,” Witherspoon said. “I can’t explain why, but the constant moving, little sleep, and irregular eating schedule don’t bother me at all when I am focused on how I can help make sure the festival runs smoothly.”

For the third year, Susan Sassmann and Marcia Woodward lead 1,200-plus volunteers who make the festival happen.

Sassmann has led the Women’s Resource Center of Greensboro, the annual Summer Solstice celebration at the Greensboro Arboretum, The Creative Center, Baby Belly Bazaar and an organization for teen girls called Sports Dreams.

Woodward has served as volunteer coordinator for downtown Fun Fourth, Festival of Lights and the Holiday Parade. She has been a volunteer team leader for the Carolina Blues Festival and for the Greensboro Bound Literary Festival.

“Volunteering is a wonderful way to meet great folks and to serve my community,” Woodward said.

Now they need hundreds of volunteers across 15 areas of festival service to join them.

Volunteers greet artists at the airport, accompany them throughout the festival and provide backstage support. They handle beverage and merchandise sales. They help to set up and dismantle the festival.

They also form the Bucket Brigade that collects donations to help keep the festival free.

“Volunteers are the backbone of any event, and Greensboro has traditionally come out in support of festivals in an admirable way,” Sassmann said.

To volunteer at the festival, go to https://ncfolkfestival.com/volunteer/.

Dave Pluke brings experience both on stage and behind the scenes.

He spent 10-plus years as a touring entertainer, then more than two decades in structural engineering and information technology. He has worked as an audio engineer for various houses of worship and as production project manager for Sharpe Pursuits in Greensboro.

A newcomer to the Triad, he attended the second year of the National Folk Festival in Greensboro as a student in Guilford Technical Community College’s entertainment technology program.

“I was absolutely floored by the quality and diversity of the music,” he said.

“No matter what the challenge, it seemed everyone was working toward a common goal — bringing unique and significant music and dance to the folk of North Carolina,” Pluke said.

That led to this year’s job as production manager. Pluke will oversee staging, sound and lighting gear and crew.

“A lot of work goes into hosting a festival that closes down city streets to accommodate six major stages and 150,000-plus visitors,” he said.

The daughter of restaurateurs, Ling Sue Withers has worked in the food business since her teen years. She has organized food vendors for a variety of festivals, including Summer Solstice and the National Folk Festival in Greensboro.

“With the N.C. Folk Festival, we have an opportunity to showcase local food vendors that put their heart into representing traditional fares of North Carolina and also bring us flavors from the growing communities of newcomers,” Withers said. “From North Carolina seafood to Indian curries, pimento cheese to empanadas — we cover it all between our six food courts.”

“Some festivals, you get your typical carnival fare, which is great,” Grossmann said. “But we really focused on getting a very diverse representation of food types at the festival. She has been critical to making that happen.”

Alan Peterson spends most work days on the road with Special Event Services of Winston-Salem, which provides lighting, sound and video production for touring artists.

But Peterson leads an electrical crew of six at the N.C. Folk Festival. Some have worked at the National Folk Festival and the Smithsonian Folklife Festival.

Festival organizers brought in Peterson last year to shadow the lead electrician during the National Folk Festival’s residency in Greensboro. They wanted Peterson to prepare to take over the job this year.

A Greensboro singer, songwriter and guitarist himself, Peterson enjoys his new role at the festival.

“You get that adrenaline rush of pulling the show off, even though you’re not the guy behind the microphone,” Peterson said.

He appreciates working in his backyard.

“I get to lay my head down where I live, which is rare for this line of work,” he said.

Admission: Free. Donations to the Bucket Brigade of volunteers help to keep the festival free.

Information: ncfolkfestival.com for more details and a complete schedule.

See performer profiles and the festival news at www.greensboro.com/go_triad/nc-folk-festival/

Festival organizers have hired local experts to perform roles that the National Folk Festival filled from 2015 to 2017.

Greensboro native, Grammy Award winner and MacArthur "genius grant" recipient Rhiannon Giddens serves as both guest curator and performer at the N.C. Folk Festival. See her among more than 30 acts at the free, three-day, outdoor multicultural festival in downtown Greensboro.

Tom Philion of ArtsGreensboro was instrumental in bringing the National Folk Festival and its successor, the N.C. Folk Festival, to Greensboro.

Lynn Witherspoon is one of two operations managers.

Lynn Witherspoon donned a wig for a 1970s-themed beer release celebration for Foothills Brewing in Winston-Salem. Foothills is the beer sponsor for the 2018 N.C. Folk Festival.

Super Chikan and the Fighting Cocks perform at the 2016 National Folk Festival in downtown Greensboro. 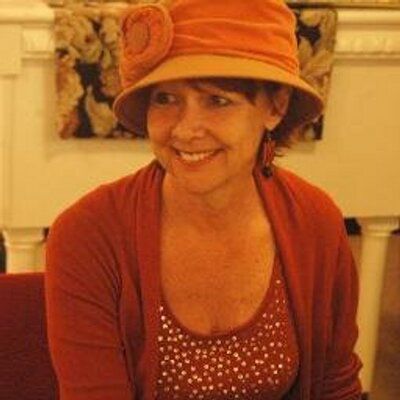 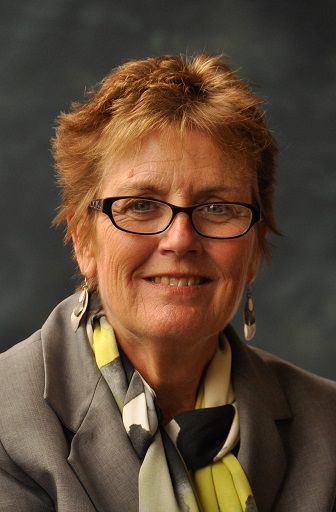 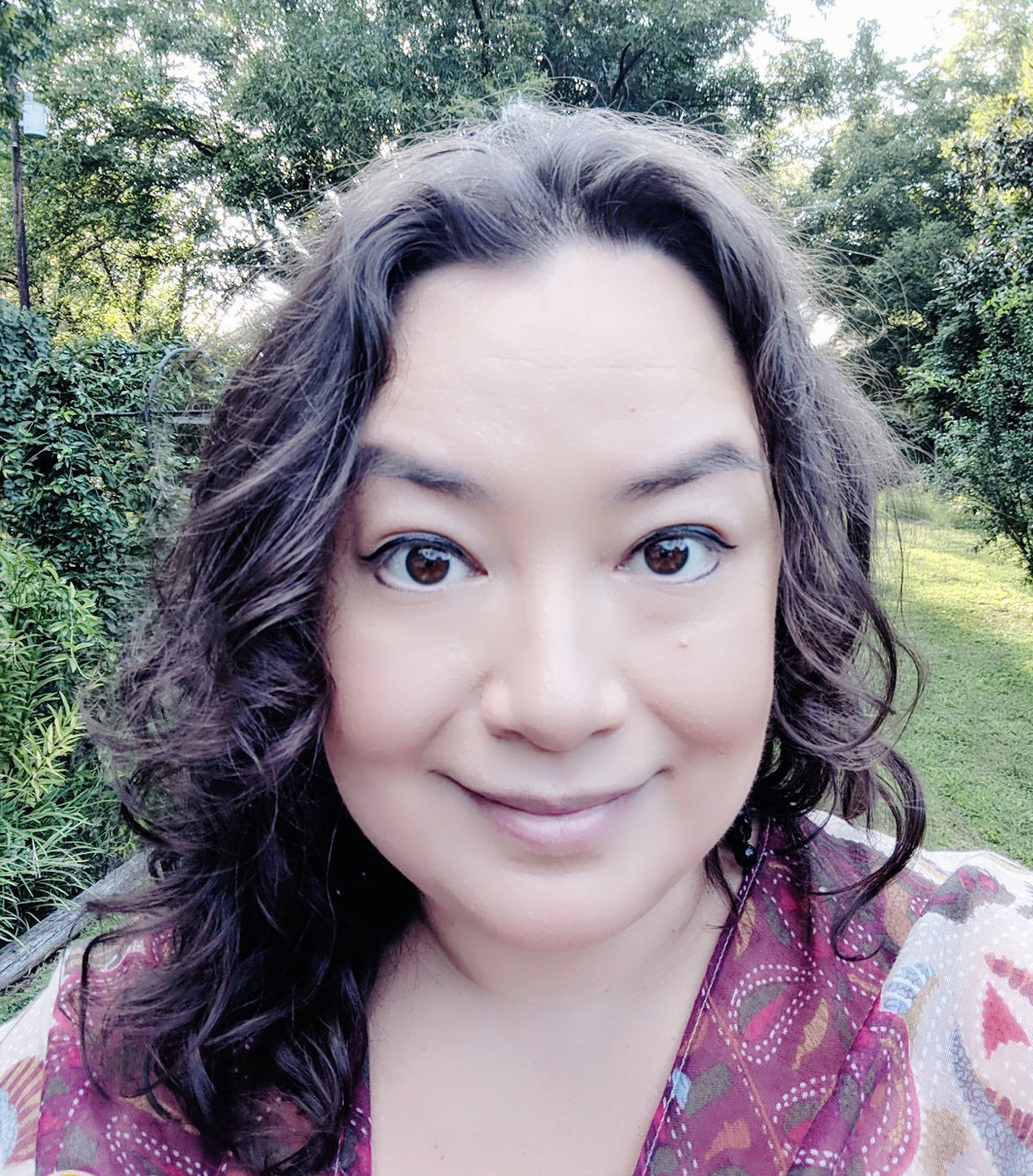 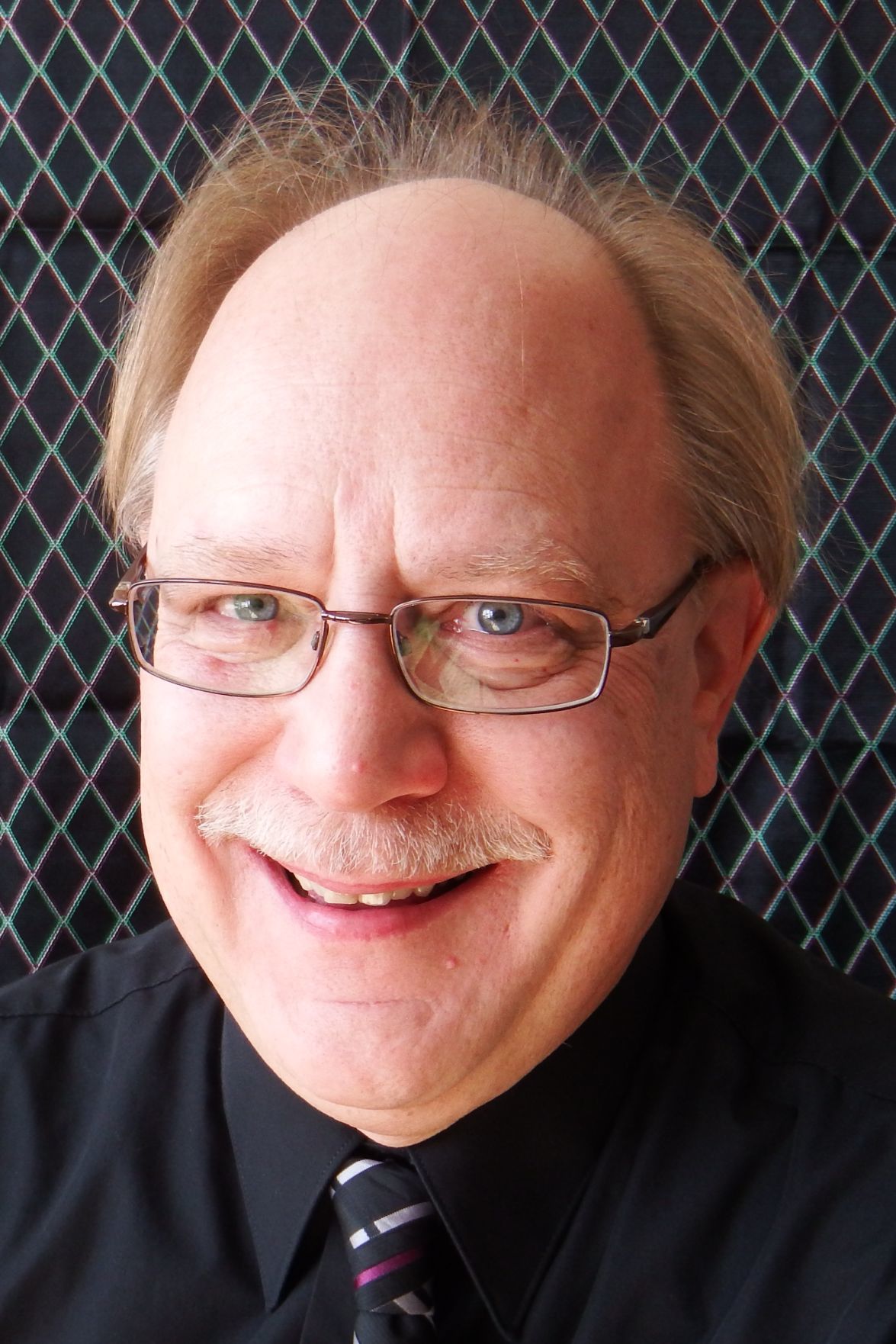 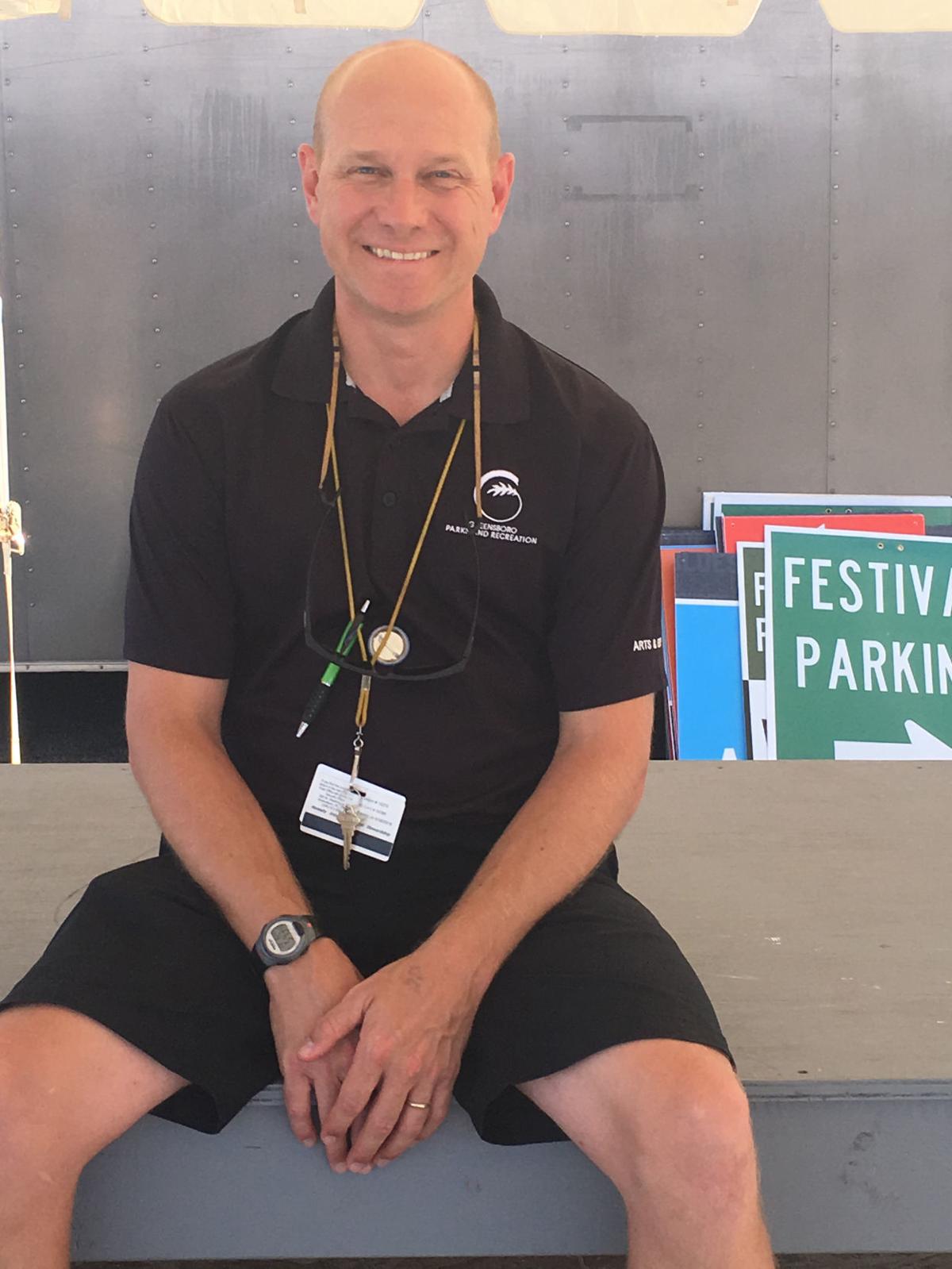 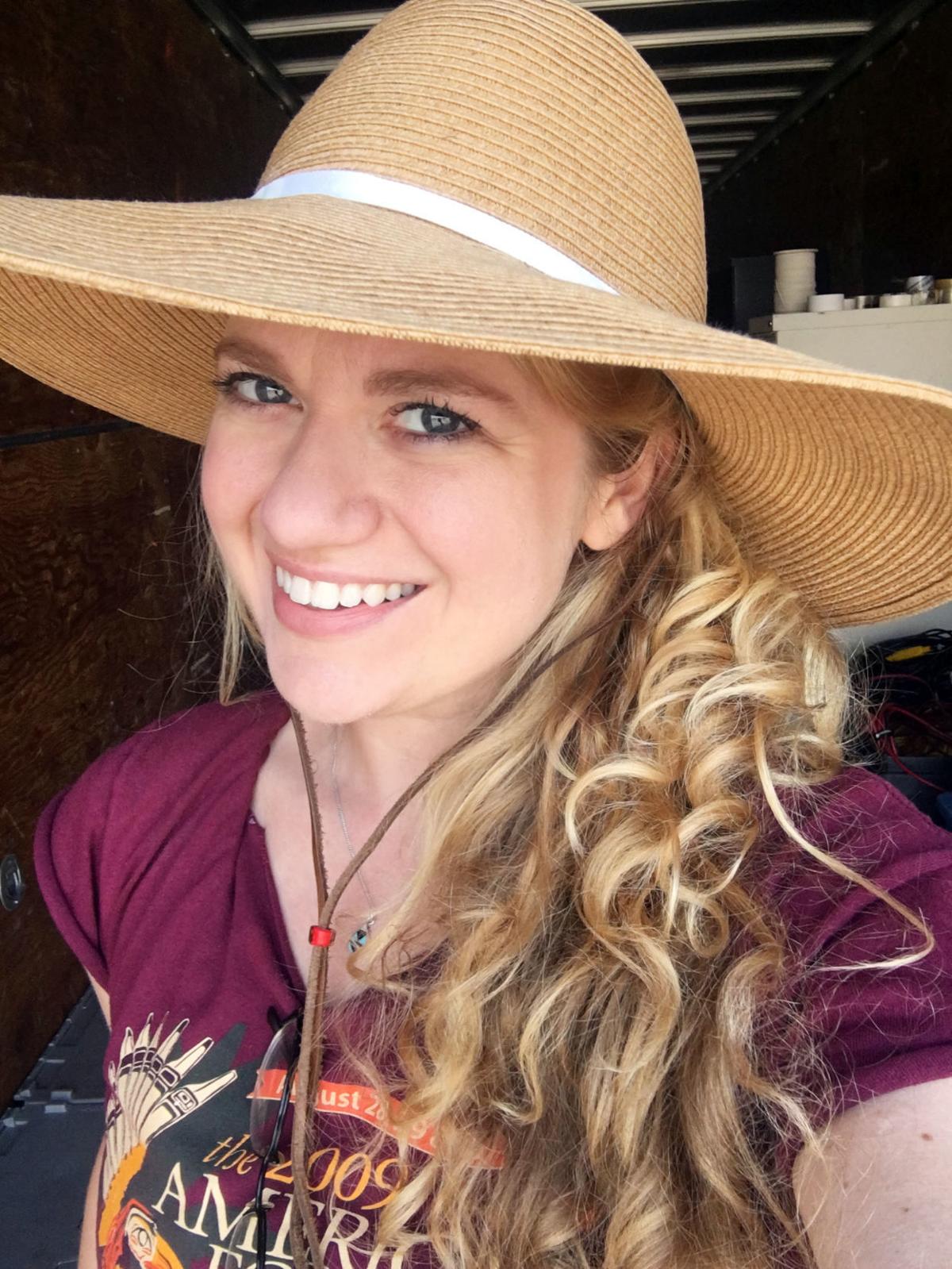