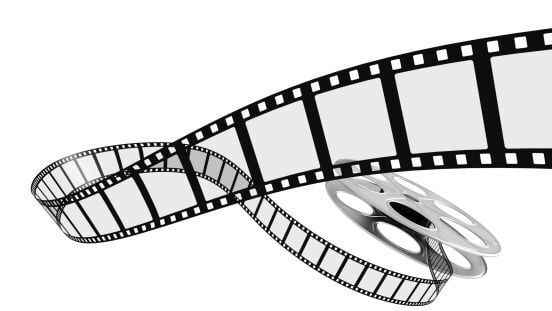 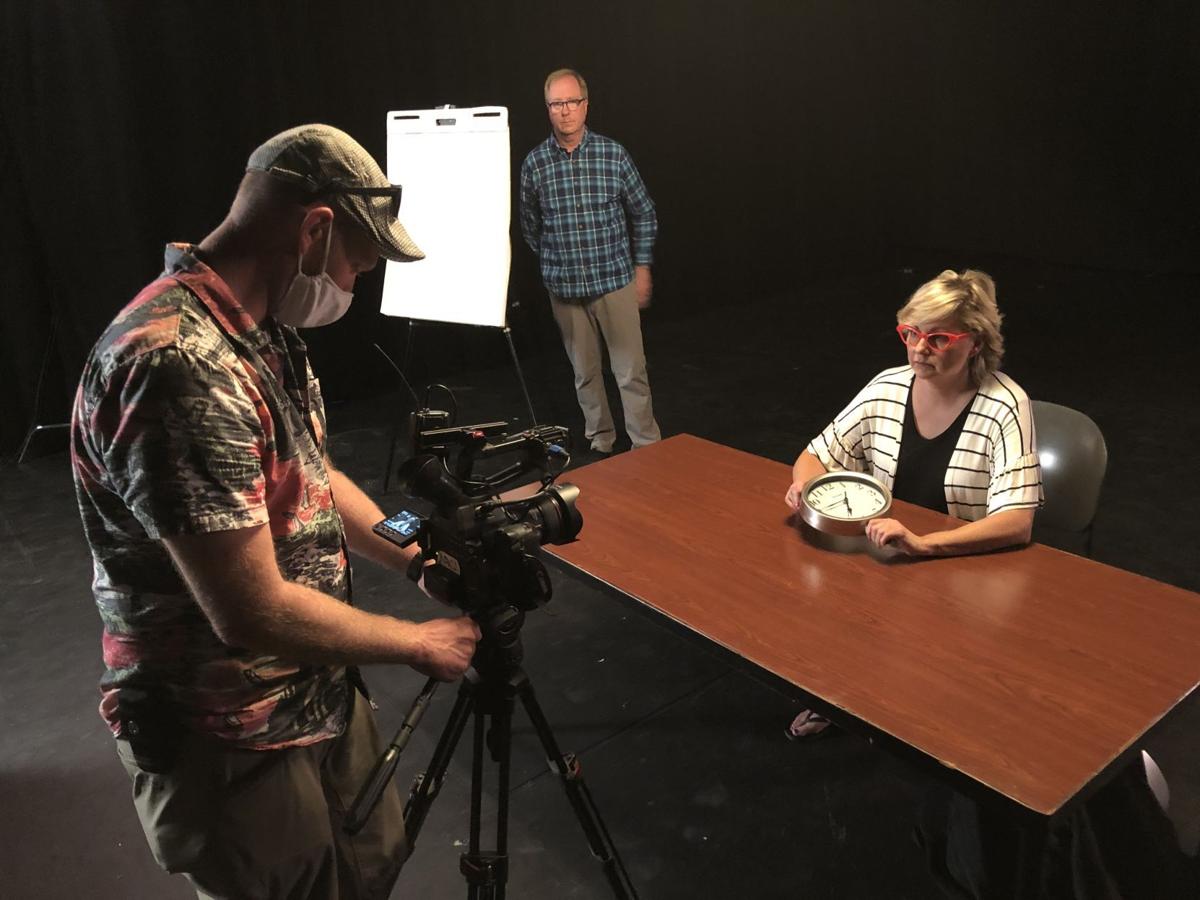 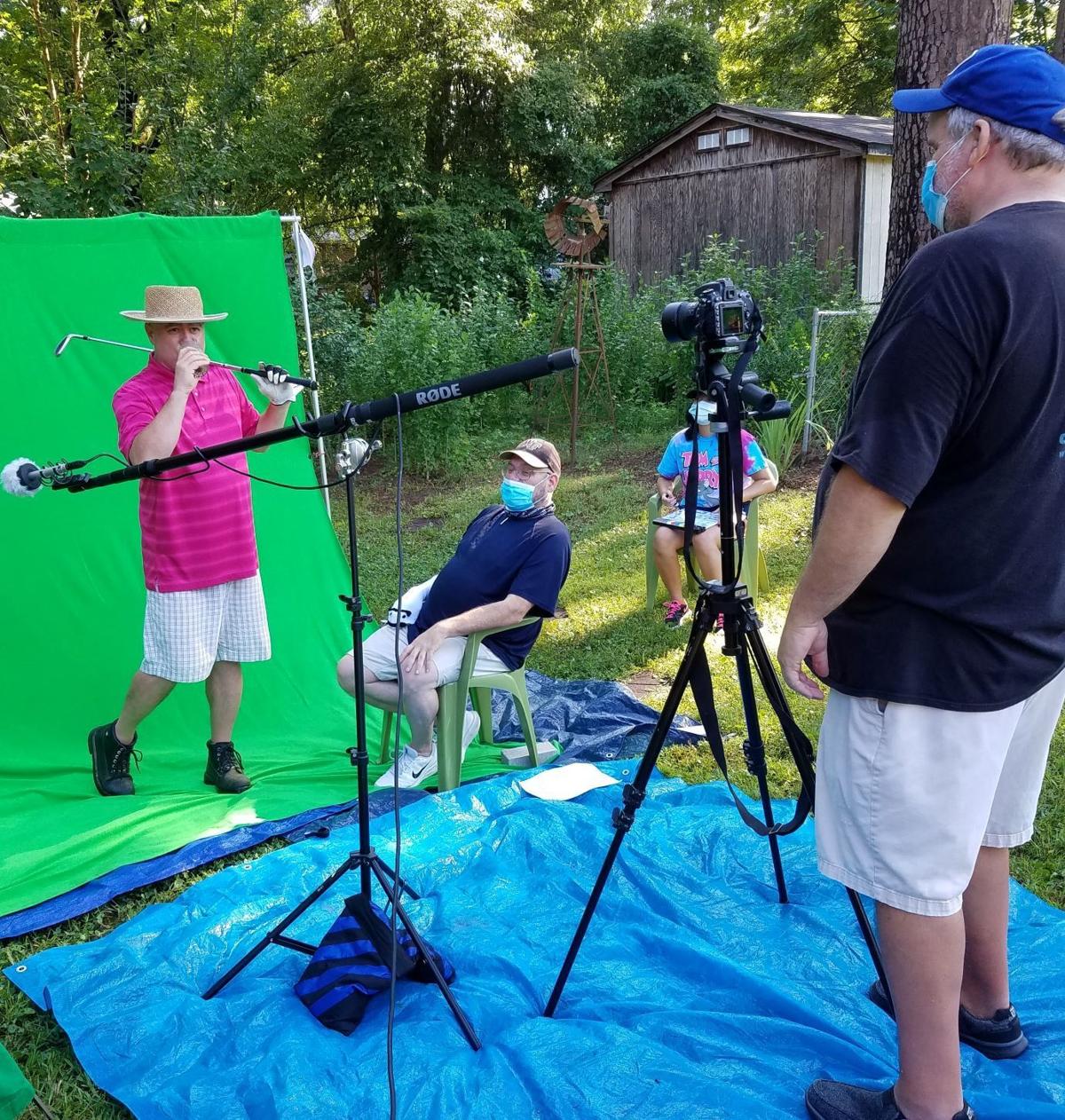 Kenny Ferris (with golf club) appears in “The Captain Nebulas Holiday Special,” as part of the 48 Hour Film project. Director Randy Harris films behind the camera and Gene Shanks watches.

Kenny Ferris (with golf club) appears in “The Captain Nebulas Holiday Special,” as part of the 48 Hour Film project. Director Randy Harris films behind the camera and Gene Shanks watches.

GREENSBORO — The COVID-19 pandemic has delayed the annual 48 Hour Film Project in other cities. But not this city.

Last weekend, Greensboro became the first city in the U.S. and second city internationally to hold this year's filmmaking competition since the pandemic hit, said Iris Carter, who runs the local project.

But the pandemic has been felt. This year, teams received instructions and submitted their film online instead of in person.

Each filmmaker had to get a certificate from industry professionals to ensure they followed COVID-19 safety guidelines.

And because the Carolina Theatre is closed, the 23 short films will be screened online at 7 p.m. Friday and 2 p.m. Saturday. Screenings can be found through 48hourfilm.com/greensboro or facebook.com/greensboro48hfp.

"Each step in the process has been a challenge," Carter said.

In the 48 Hour Film Project, teams of filmmakers are assigned a genre, character, prop and a line of dialogue.

Then they're given 48 hours to write, shoot and edit a short film containing those elements.

In Greensboro this year, the character was Sidney or Sonya Lichtenstein, a customer-service representative.

The prop: toilet paper, a much-sought commodity during the pandemic.

The line: "I'm actually weirder than you think."

From as far away as Virginia, 25 teams registered. Of those, 20 submitted their films on time. Three arrived late, and two were incomplete.

All films screened this weekend will be eligible for audience voting. Judges will consider the 20 on-time films for various awards.

The best film advances to the international competition.

The pandemic has made it a difficult year for the entertainment industry, as sets have shut down and put casts and crews out of work.

For the 48 Hour Film Project, each U.S. city usually schedules its own competition between April and August.

Carter had scheduled it to run over three days starting July 10. Then the pandemic hit, and the international 48 Hour Film headquarters canceled all events through June and said they could be rescheduled in late July.

Carter considered postponing. But she decided that it would push dates into the start of the school year.

She even considered canceling. But about a month ago, she decided to push forward.

"It's been crazy ever since," she said.

Filming had to follow COVID-19 state and federal safety rules. The response from filmmakers impressed Carter.

"They felt more empowered to provide a safe environment for their crews, which were already significantly smaller," she said.

U.S. cities now have until Sept. 30 to finish their competitions. Some have canceled. Others will wait to see what happens with the pandemic.

Greensboro's steps will influence national guidelines for cities that conduct their competitions in the coming weeks, Carter said.

"Team leaders have commented the event is providing a sense of normalcy in uncertain times," she said. "I find it ironic that an event known for chaos is providing an oasis for some."

Don’t fret. All this virus bull will amazingly disappear the second week I November. The goal is to keep the Tump administration on the ropes till the election.