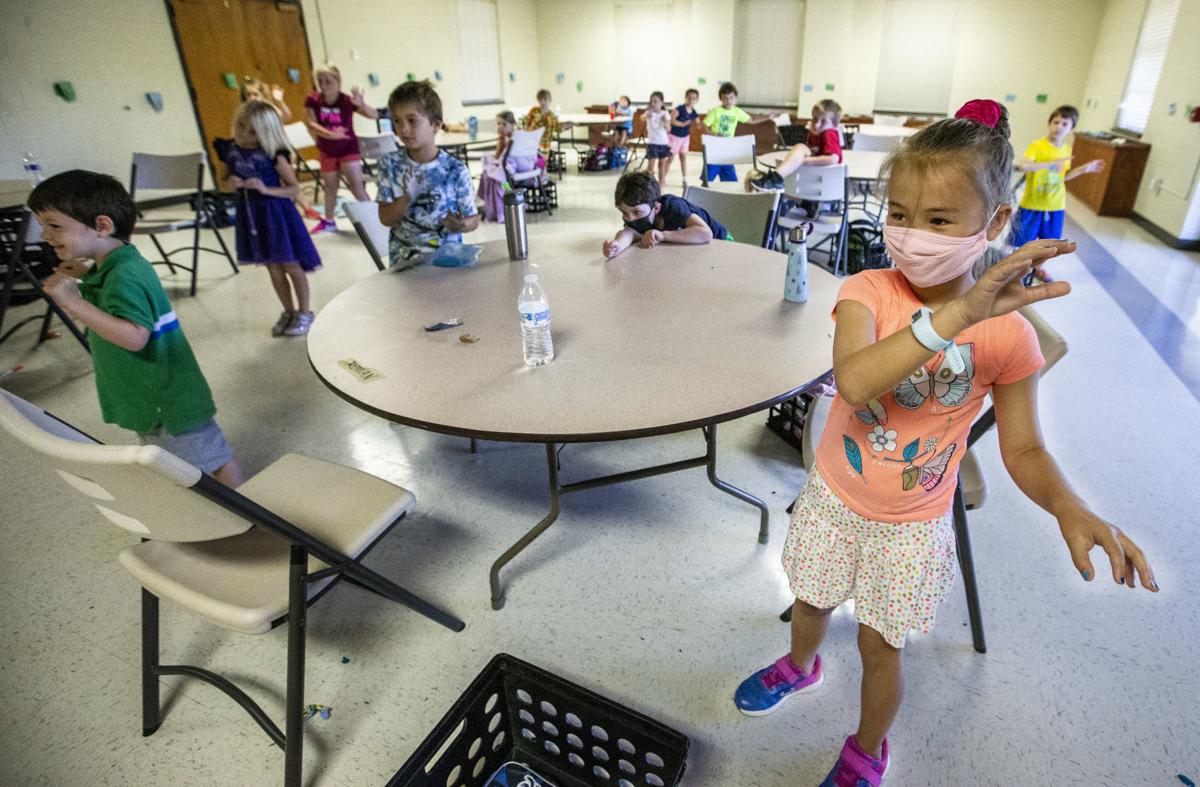 Ali Downs (right) and other Camp Bur-Mill campers socially distance as they dance in the clubhouse at Bur-Mill Park in Greensboro on Friday.

Camp Bur-Mill campers socially distance as they fish from the bank at Bur-Mil Park in Greensboro, N.C., on Friday, June 12, 2020.

Canada geese take off from a pond at Bur- Mill Park as Camp Bur-Mill campers play on the bank in Greensboro, N.C., on Friday, June 12, 2020. 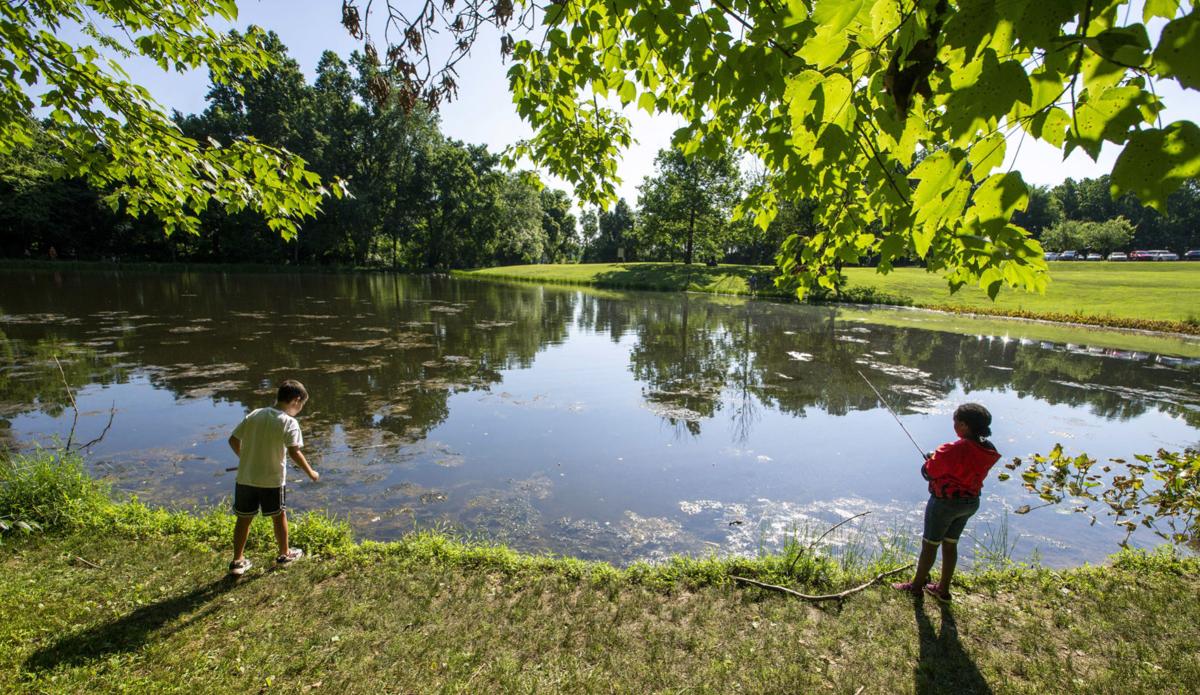 Camp Bur-Mill campers CJ Duke, 8, and Bez Zander, 10, socially distance as they fish from the bank of a pond at Bur-Mil Park in Greensboro on Friday.

But this is no typical summer for summer camp.

The coronavirus pandemic has forced camps to rethink how they operate and in several cases, go virtual.

“We are going to take every precaution we can to keep kids as safe as possible,” said Andy Peascoe, director of Camp Bur-Mil, echoing the thoughts of every camp director.

Camp Bur-Mil is a weekly recreational day camp for ages 5 to 13 run by Precision Golf and Tennis at Guilford County’s Bur-Mil Park.

It opened last week and ended a long isolation for many kids who had been cooped up since schools, and pretty much everything else, closed over three months ago to curb the spread of the coronavirus.

But it opened with more restrictions: fewer campers in smaller groups, face coverings for them indoors if possible and social distancing.

Nonetheless, Peascoe said, “The kids are enjoying it. They’re laughing, they’re talking. They are getting to be kids again.”

That doesn’t mean there weren’t concerns in planning camps this year.

“We had been talking about different protocols and there was some initial apprehension,” Peascoe said.

Peascoe said some of the ways the camp had always operated actually lend themselves to social distancing. He said camps are divided into age groups and each group has their own room where they can isolate from other campers.

“There is no cross-traffic between groups and they are limiting their exposure (to each other) by being outside as much as possible,” Peascoe said.

Parents also had apprehension about sending their kids to camp.

“We didn’t really feel comfortable with it, but at the same time, both my wife and I work full time,” Brit Cohan said when he picked up his two children at Bur-Mil.

Cohan’s children, Will and Kate, are enrolled in Camp Bur-Mil all summer. Once he learned more about how the camp would operate this year, he felt better.

“It sounds like they are really making an effort to follow guidelines and not doing it haphazardly,” he said.

Campers at the Greensboro Science Center, which holds a variety of science-based camps for ages 4 to 12, will find things a little different this year as well. Campers will meet in larger spaces and with smaller groups.

“We’ll have all of those Xs on the floor to designate social distancing when in line,” said Courtenay Vass, the science center’s community program manager.

“Typically with Legos and robotics, campers work as a team, but not this year,” Vass said.

ClubFitness, a fitness center and pool, offers annual summer fitness-based camps. Maria Gonzalez, who runs ClubFitness, said the facility will have no trouble spreading campers out since gyms in the state have been closed for three months because of the state-mandated shut-down .

“We have a lot of space,” Gonzalez said. “And even if we were open, we have big spaces in our facility which is 60,000 square feet.”

Meanwhile, many organizations are turning to holding camps digitally. GreenHill Center for North Carolina Art, Triad Stage, Dance Project, Music Academy of North Carolina and Creative Greensboro, formerly the City Arts drama program, are among those who have moved their camps completely online.

The Center for Visual Artists hopes to open its summer camps on July 13 in the downtown Greensboro Cultural Center.

“We are known for our art camps, and they’re a major source of revenue for us as a non-profit,” said Corrie Lisk-Hurst, CVA operations director.

“After surveying parents, we see a definite demand for us to keep doing them,” Lisk-Hurst said. “We believe we can offer a pretty safe environment, and we’ve made changes to keep teachers and kids as safe as possible.”

Greensboro Children’s Museum downtown won’t offer camps on site in June or July. But it expects to resume in August, with modifications, its website says.

Community Theatre of Greensboro doesn’t expect to hold summer camp. It will offer virtual performances, though.

“We sent out virtual camp information for parents who registered their children for camps in June,” CTG Executive Director Roz Fulton said. “But they were not interested in that kind of camp experience.”

Virtual camps will use online platforms like Zoom or other video-conferencing to connect with children at home.

“People are getting creative,” said Jaymie Meyer, education director at GreenHill Center for North Carolina Art in the cultural center.

“We really thought hard about it and went through all the protocols we would need to put in place, and decided we had more control over doing it virtually,” Meyer said.

To make it easier for children and parents, GreenHill will offer art boxes containing all supplies, instructions and hand-outs ready to go for an additional fee.

So how do they teach hands-on art online?

Meyer has recorded tutorial videos of herself doing art projects to show campers first. Classes will be live.

“When I’m in front of group a lot of times they can’t see everything I’m doing,” she said. “But with an overhead camera shot you can see everything happening.”

“And it’s a lot quieter,” Meyer added with a laugh.

Ava-Juliana has grown accustomed to participating in school and other activities online, said her mother, Llessenia Graham-Martinez.

“I think you just have to do what the teacher says,” Ava-Juliana said. “I am super excited.”

Dance Project in the cultural center will offer online summer camps and classes via Zoom for youth, teens and adults starting June 22.

“We surveyed our parents and found that there was interest in summer programming, and still a great deal of uneasiness about in-person classes,” said Anne Morris, who leads Dance Project with Lauren Joyner.

Zoom allows the lead teacher for each class to interact with campers while a feedback assistant helps out on the technical side of things.

“We also like Zoom because the students get to see each other,” Morris said.

Morris said Dance Project has made up for in-person interaction by lengthening sessions to spend more time with students, and for students to spend time with each other.

Campers at Bur-Mil have that in-person connection, but with some challenges.

“It is a little more difficult because we have to stay further apart,” said Wil Cohan, 11. “But overall we’ve still been having a good time. One of the major downsides is we’ve lost the pool.”

Camp Bur-Mil typically uses the park’s pool, but the pool is closed.

“That’s what I would be looking forward to a lot each day. I just love the pool,” Kate said.

Face coverings are an issue for in-person campers.

Peascoe of Camp Bur-Mil said campers will be asked to wear face coverings indoors if a parent or guardian determines they can reliably do so. The Greensboro Science Center is also encouraging face coverings for its campers.

“It’s going to be really hard for a four-year-old to keep one on. But we’re going to try,” said Vass of the science center.

Both Camp Bur-Mil and the Greensboro Science Center will require camp staff to wear masks.

Even with the changes, Kate and Wil Cohan were ready to just be kids.

“I’ve been doing math with candy and then eating the extra candy,” Kate Cohan said.

Wil was delighted with a typical summer pastime.

The Greensboro Science Center will hold an outdoor walk-through light display through the holidays.

N.C. Folk Festival: Time for a (virtual) weekend of music

The annual N.C. Folk Festival and Carolina Blues Festival will go virtual this weekend. Watch for free online or on Greensboro Television Network.

Catch more TEDxGreensboro talks for free by local thinkers and doers this week and next.

The Greensboro Public Library and UNC Greensboro will launch a community “Big Read” of the novel "Silver Sparrow" by Tayari Jones at 6:30 p.m. Tuesday via Zoom.

Watch the live-stream premiere of Greensboro filmmaker's 'In Saturn's Rings'

The film "In Saturn's Rings" by a Greensboro filmmaker will make its live-stream premiere on Tuesday and Saturday.

"Now is the Time," an evening of panels discussions, music and poetry, will focus on creating a Greensboro characterized by equality and racial justice.

'The landscape will never be the same': Landmark Coble barn being torn down

Reverse: Big Ten will try to play fall football after all

Ali Downs (right) and other Camp Bur-Mill campers socially distance as they dance in the clubhouse at Bur-Mill Park in Greensboro on Friday.

Camp Bur-Mill campers socially distance as they fish from the bank at Bur-Mil Park in Greensboro, N.C., on Friday, June 12, 2020.

Canada geese take off from a pond at Bur- Mill Park as Camp Bur-Mill campers play on the bank in Greensboro, N.C., on Friday, June 12, 2020.

Camp Bur-Mill campers CJ Duke, 8, and Bez Zander, 10, socially distance as they fish from the bank of a pond at Bur-Mil Park in Greensboro on Friday.