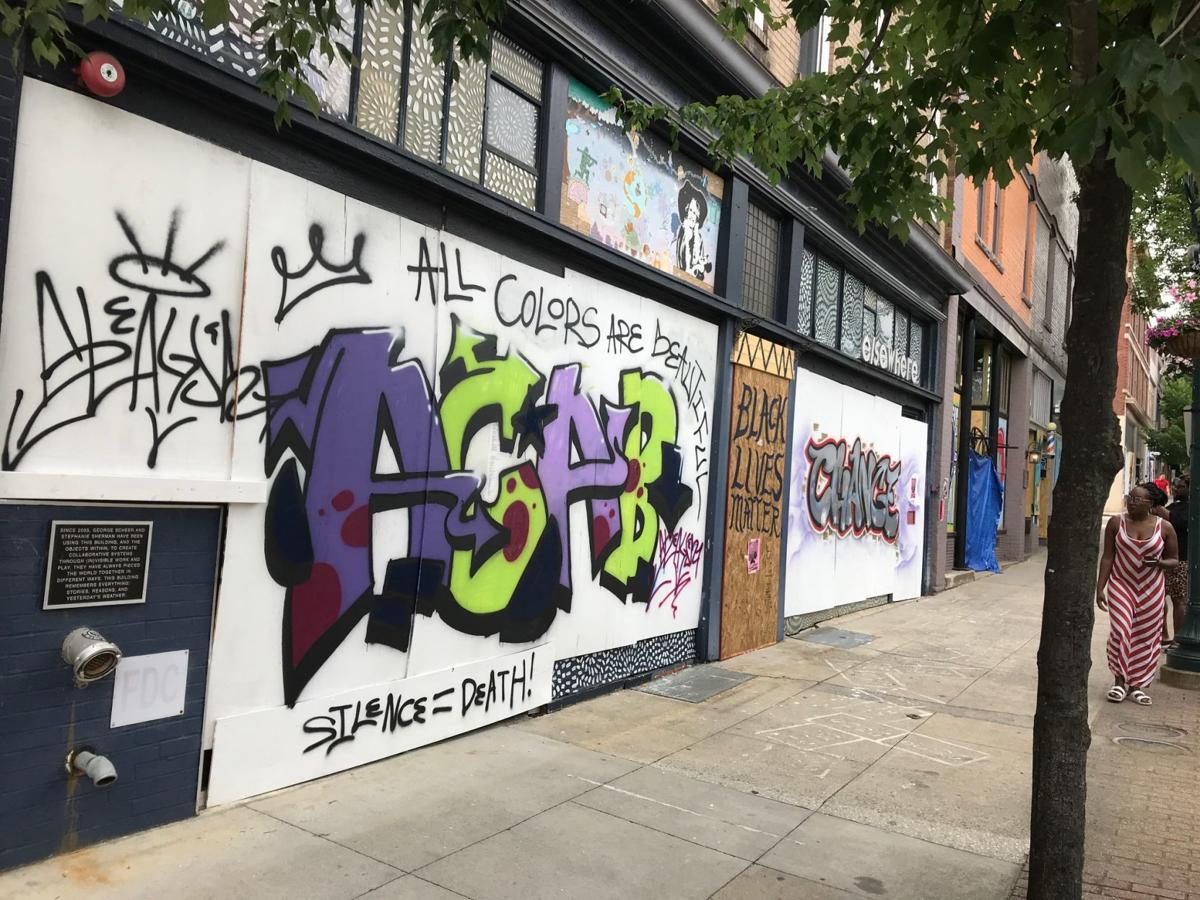 This mural on the downtown front of Elsewhere, a living museum and artist residency on South Elm Street in Greensboro, soon will be replaced by a new mural created by a group of mostly black artists. 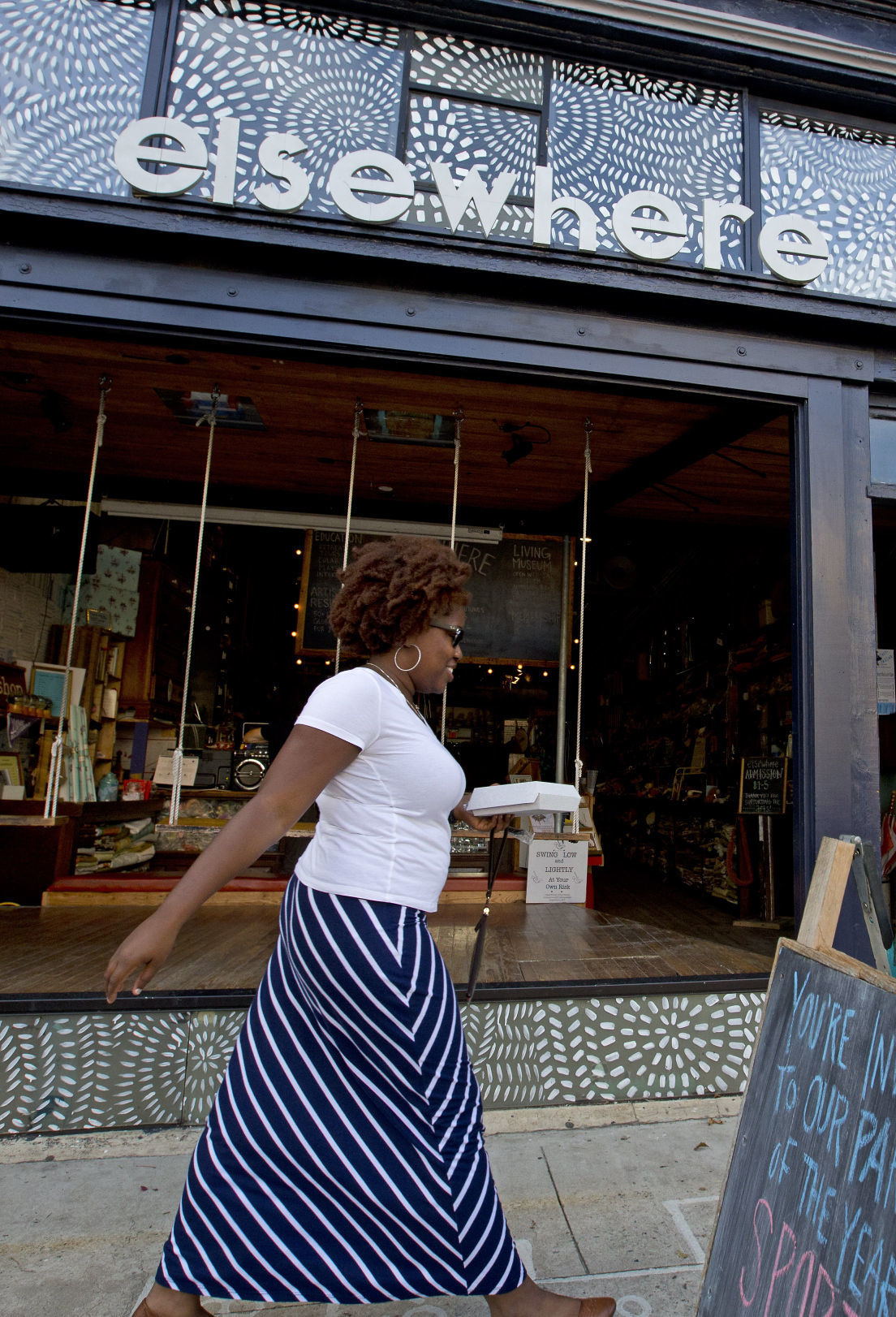 This 2015 photo shows the South Elm street front for Elsewhere, the downtown living museum and artists’ residency in Greensboro.

GREENSBORO — A new mural soon will cover the downtown storefront of Elsewhere, the living museum and artist residency.

On Monday, a group of 12 artists — mostly black, but a few invited white artists and one Hispanic artist — led by Darlene McClinton said yes.

At a meeting at Elsewhere, they began to quickly plan. They hope to prime the plywood and plan the design today, then finish the project by Friday.

That plywood went up after protests began locally and nationwide over police brutality of black people and the death in Minneapolis of George Floyd, who died at the hands of police officers there on Memorial Day.

Many downtown storefronts have been boarded up, either to cover windows broken by vandals or to prevent potential vandalism. Elsewhere put up plywood over its storefront. primarily as a preventive measure, Giddings said.

Then last week, professional and amateur artists came to paint plywood around downtown with colorful murals and positive messages.

Local street-art advocate Phillip Marsh was among black artists who painted murals. He and artist Alex BTM created images on plywood that covered nearby businesses On Point and Social Status.

But over the weekend, someone painted the words “white power” over their work. So Marsh and another artist who goes by the name Thore flipped the plywood and painted new art on the other side.

On Monday, Marsh joined the group planning the mural for Elsewhere.

“This is a mural of pain for the black community,” Marsh said. “It’s not flowers and rainbows, because that’s not what we felt.”

The mural will be a project of The Artist Bloc, hosted by Elsewhere.

McClinton said she sees the mural expressing themes of pride, unity, liberation, consciousness, as well as such taboo topics as perhaps someone being arrested or hanged.

“The fact that artists are able to come together and express themselves, that’s therapeutic,” McClinton said.

McClinton expressed gratitude that Elsewhere will pay the artists at a time when many have lost sales and commissions because of the COVID-19 pandemic.

The mural’s location at Elsewhere could be temporary, McClinton said.

Artists and Elsewhere may rotate it to different exhibitions — or find it a permanent home, she said.

Marsh said he appreciates the opportunity of a collaborative effort from different perspectives with Elsewhere. Like Marsh, Elsewhere has brought in artists from around the country to create art here over the years.

“That should bode well for what that can mean for our community, which is a great phenomenal piece of work being created,” Marsh said.

GREENSBORO — After the death of George Floyd in Minneapolis, Greensboro saw a flowering of public art to express feelings stirred amid protest…

Artists have transformed downtown Greensboro's shattered stores into murals of hope and messages from the heart.

Watch Now: Ever wonder what happens to the balloons when the celebration is over?

This mural on the downtown front of Elsewhere, a living museum and artist residency on South Elm Street in Greensboro, soon will be replaced by a new mural created by a group of mostly black artists.

This 2015 photo shows the South Elm street front for Elsewhere, the downtown living museum and artists’ residency in Greensboro.