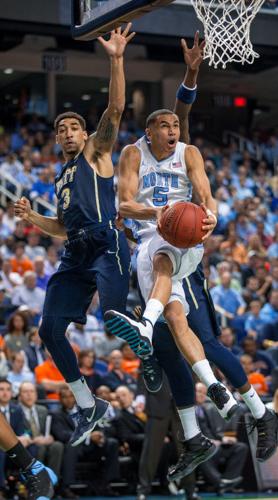 North Carolina's Marcus Paige tries to make a play against Pittsburgh during the ACC tournament in Greensboro. 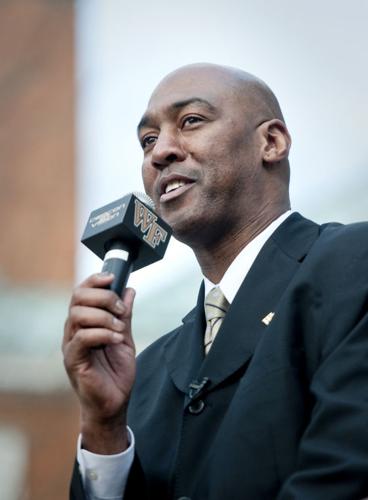 Basketball practice will begin Friday on Tobacco Road at Duke at North Carolina, with N.C. State and Wake Forest following on Monday. So it’s time to take a look at the area ACC schools in advance of the fast-approaching season.

Season recap: Duke’s season started with the highest of expectations but never came together the way the Blue Devils would have liked. Jabari Parker was very good, but not the basketball superhero Duke wanted him to be - and needed him to be. Quinn Cook, Andre Dawkins and Rasheed Sulaimon moved in and out of the starting lineup, and Duke never found consistency. The Blue Devils stumbled at the worst possible time, finishing the season with three losses in the last six games.

Stat to know: Duke allowed opponents to shoot 50.3 percent from two-point range. The Blue Devils simply didn’t have the quickness to stop teams from driving.

A preseason must: Get the freshmen and upperclassmen on the same page. All four freshmen probably will be asked to contribute right away - some even in favor of more established players. Making sure those dynamics are in order is step No. 1 for Duke.

2014-15 outlook: Duke’s recruits will likely take center stage again, but the Blue Devils’ older players might be better equipped to handle that transition. Rasheed Sulaimon and Quinn Cook are now the elder statesmen of the team. If they can play consistently and Duke’s freshmen can fly all over both ends of the court, Duke could emerge atop the ACC. But if the same issues from 2013-14 rear their heads, Duke could muck through a middling season.

Season recap: North Carolina rediscovered its offense in the middle of the season and used that to springboard to a 12-game winning streak. The Tar Heels shot 47 percent during that stretch and continued that solid offensive production through the end of the season. However, UNC struggled against top-flight defensive teams and struggled to dictate the tempo of the game consistently.

Stat to know: As a freshman, F-C Kennedy Meeks hauled in 15.6 percent of the available offensive rebounds whenever he was on the court - that’s a team-high. Given how much Roy Williams prizes second chances offensively and Meeks’ offseason weight loss, more time for the big guy is probably in order.

A preseason must: Run. Kennedy Meeks is rumored to have lost about 45 pounds, but he’ll need to lose more to run UNC’s secondary break offense. Brice Johnson has more of the build to run that offense, but both players need to be able to get up and down the floor comfortably.

2014-15 outlook: After two middling seasons, the Tar Heels suddenly find themselves with a deep, talented and experienced roster full of parts that actually fit Williams’ preferred model: a top-shelf scoring point guard, Paige; a collection of low-post scorers, Meeks and Johnson; a good stopper, Tokoto; and an exciting freshman, Pinson. But any early-season struggles or doldrums will be viewed as a disappointment.

Season recap: Tony Buckets! N.C. State had possibly the most exciting scorer in the country, T.J. Warren. Everything around Warren, however, varied from night to night. Plagued with the inconsistency of youth, The Wolfpack both lost to bottom-feeder Wake Forest and toppled leader Syracuse, finishing solidly in the middle of the pack.

Stat to know: Warren took 37.3 percent of N.C. State’s shots when he was on the floor in 2013-14, the third-highest rate in the country. Those shots are going to have to go somewhere.

A preseason must: Shooting practice. Last season the Wolfpack could look to Warren for points whenever it needed them. This season, the remaining players are going to have to dust off their shooting form and figure out how to score.

2014-15 outlook: N.C. State coach Mark Gottfried’s favorite word during media day was "unproven," and it fits: the entire roster will have to shift into new or expanded roles this season. That’s what happens when the ACC’s leading scorer leaves the roster. N.C. State might be better equipped a year later to carry the collective load, but expect some early bumps in the road.

Season recap: Wake’s abortive Jeff Bzdelik experiment finally reached its ugly conclusion in 2013-14. The Deacons were more competitive than they had been in previous years but still in the bottom half nationally in both scoring and points allowed.

Stat to know: Wake’s record under Bzdelik was an abysmal 51-76, meaning that Wake Forest was consistently bad for four seasons. That’s not the type of situation a coach can turn around in one year.

A preseason must: Strap in. It’s going to be a long, arduous process for Wake Forest and Danny Manning to get back to relevance - Bzdelik left the cupboard relatively bare. If Manning can recruit, Wake will be just fine long-term, but 2014-15 could get ugly.

2014-15 outlook: This will likely be an ugly season for Wake Forest. Miller-McIntyre and Thomas are impressive pieces, but Wake will be very thin and there aren’t many options beyond those two at the moment.

Big 12 football schedule 2023: Winners, losers and what to expect

North Carolina's Marcus Paige tries to make a play against Pittsburgh during the ACC tournament in Greensboro.