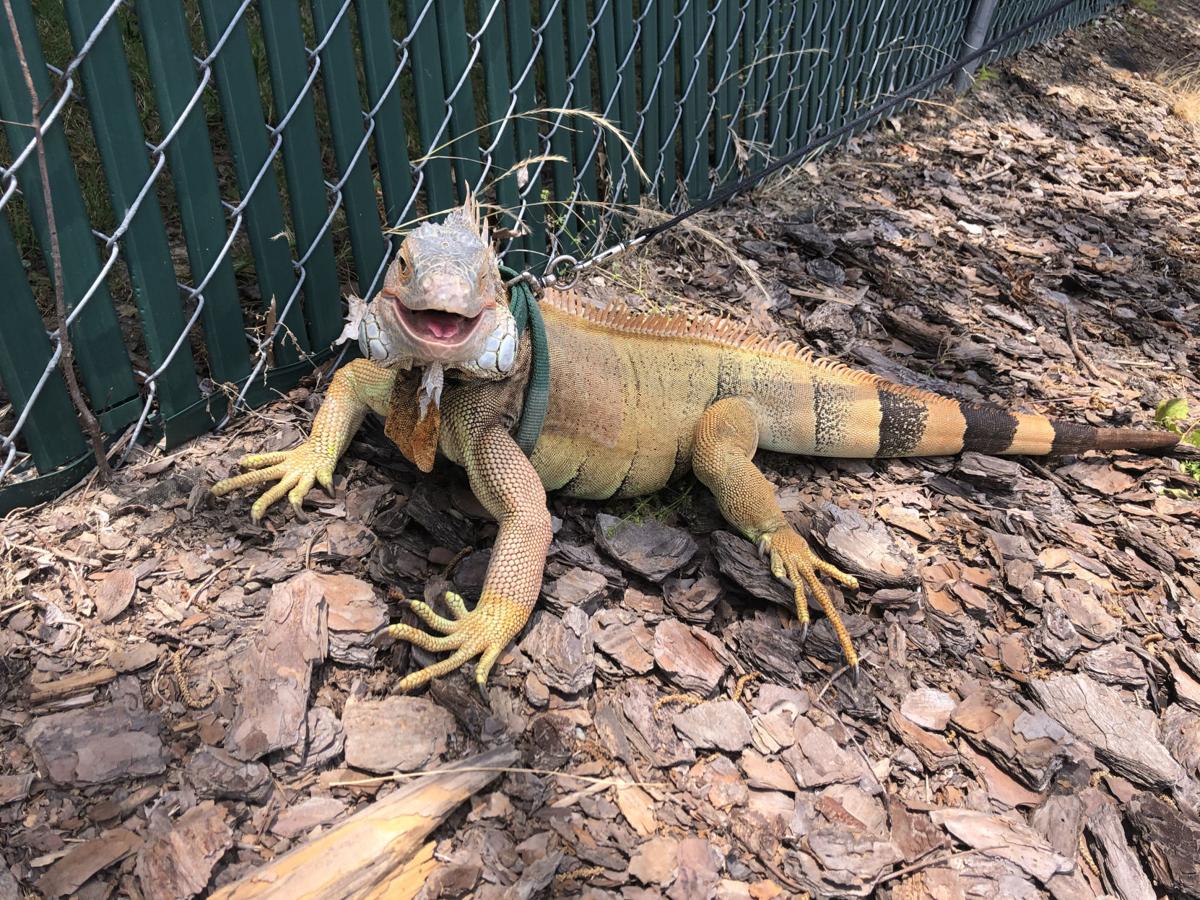 Comet, a horn-nosed iguana from Honduras, strikes a pose. 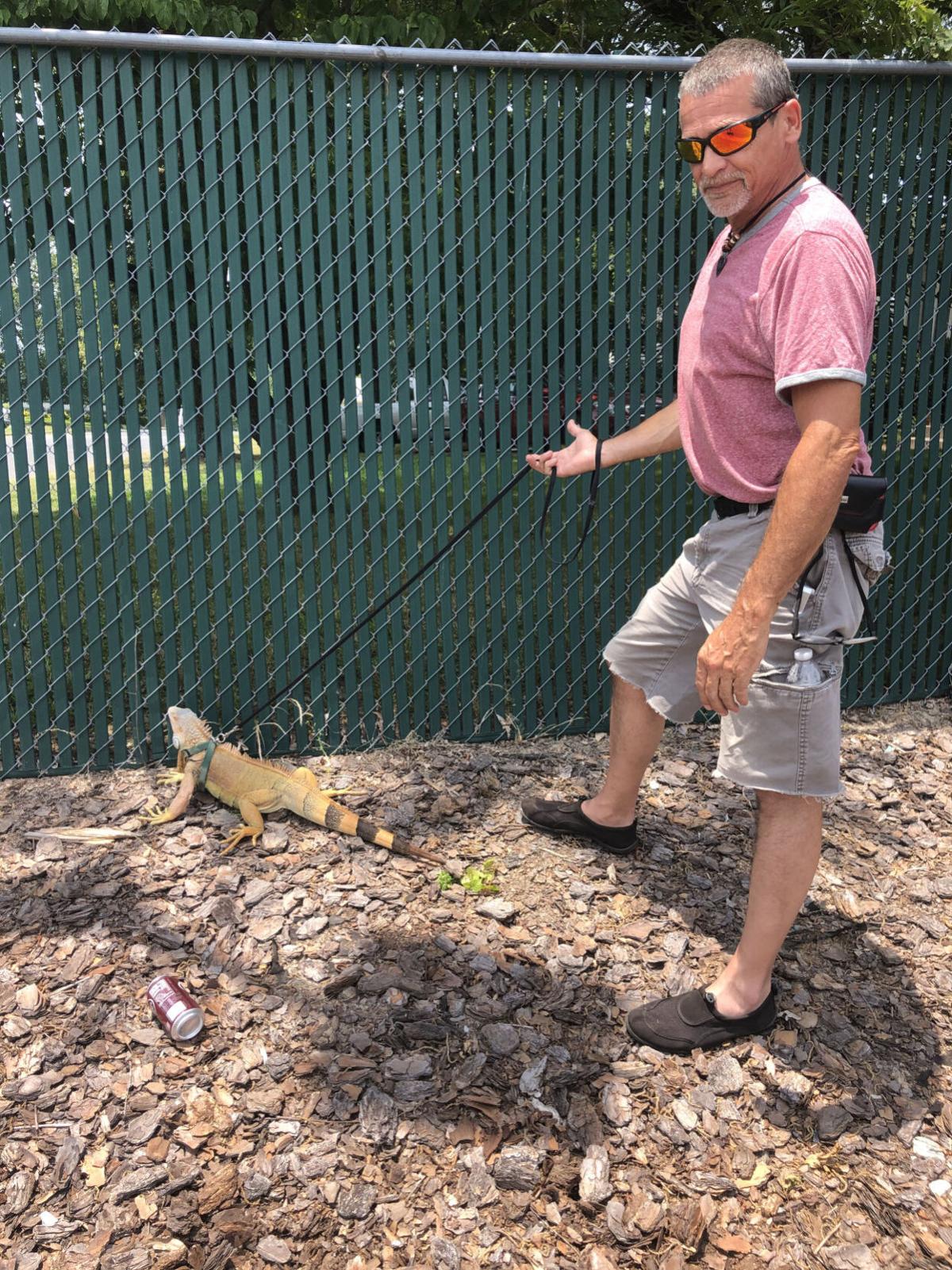 Comet the iguana on a leash with JD Bae-ring. His wife, Alicia, is allergic to cats and dogs, so the couple decided to adopt a rescue lizard to give that a try.

ASHEBORO — It was just another early Sunday afternoon in Asheboro at the intersection of West Walker Avenue and Albemarle Road.

At the nearby South Asheboro Middle School track, people were exercising. At Biscuit Co., vehicles were lining up at the drive-thru. And in front of the Five Points Laundry, a man was walking a 3-foot lizard on a leash.

Comet, a horn-nosed iguana from Honduras, was enjoying the warm sun and some local vegetation while JD Bae-ring, the man on the other end of the green leash, patiently stood by. His wife, Alicia, was finishing some laundry inside.

Neither were surprised at all to be approached by a stranger. Bae-ring instantly went into “how to take a photo with Comet” mode and Comet, for his part, appeared to be smiling for the camera.

They’ve been through that routine hundreds if not thousands of times.

“We do a magic show, or we used to before this (the coronavirus pandemic),” Bae-ring said. “We did street performing but we also visited children’s hospitals.”

One of Bae-ring’s favorite tricks in his shows is called “the lizard splitter.”

“It’s one of a kind, no other magician does it. I put him in a box that falls apart. When it falls apart, he vanishes and 10 little ones fly out,” he said. “Half the kids are chasing lizards, half the kids are running from lizards, all the adults are, ‘Did you really just turn lizards loose in a hospital? Tell me you didn’t just turn lizards loose in a hospital.’

Bae-ring, originally from Chicago, and Alicia, an Asheboro High School graduate, live in Franklinville. They celebrated their 21st anniversary a week earlier, during the last weekend in June.

Alicia being a Blue Comet graduate, however, is not how Comet got his name.

When the iguana was a baby, she said, “I kept saying ‘Calm it, calm it down’ and it just stuck, so we just called him Comet.”

Alicia is allergic to cats and dogs, so the couple decided to adopt a rescue lizard to give that a try.

“We got a three-foot lizard that we named Thundar,” JD said. “She died not long after we got her, but she was abused, so we kinda knew it was going to happen. But we fell in love with her and had to get another one. It’s been like that ever since. We’ve had 11 of them.

“We had one that lasted 15 years, Lickalodeon. Lick and I were doing the magic shows mostly.”

Comet is three years old. They bought him from Pet Barn in Asheboro soon after Lick died.

Comet hasn’t been able to do many shows yet, but he is enjoying domestic life.

“He’s the only lizard I know that actually likes to sit on an air conditioner,” JD said. “Most of them sit on a heater. This one goes to the air conditioner and sticks his head on it.”

“We’ve got him spoiled,” Alicia said. “He likes the heat — he’ll sit on the pavement when it’s hot — but he loves the air conditioning.”

An iguana’s diet is fruit and vegetables, but like many pets, Comet gets to try different things that humans are eating. He’s come to like peanut butter, scrambled eggs ... and pizza.

“If it’s not meat and we’re eating it, we’ll let him try it to see if he wants it,” Alicia said. “When (JD) brings home pizza, he can smell it.”

So, does Comet have free rein of the house?

“Oh, God yeah,” JD said. “He’s got a little enclosure that has a lockable door but the door’s always open so he can go anywhere he wants when he wants. He’ll climb and crawl on everything.

“We do have one bedroom that’s kind of closed off to him, but I like to hunt and that’s where I keep my traps and bows and arrows — the arrows can cut him.”

They’ve found that Comet doesn’t like slick linoleum, but the humans have been trained to learn that if the iguana walks on some, that’s a sign he wants to potty.

“I’ll take him for a walk outside and keep walking, keep walking, then finally I’ll go inside and put him in the tub and he’ll go.”

Comet is a friendly pet, they said.

“He doesn’t like dogs,” Alicia said. “He gets real low to the ground like he’s going to hide from them. If one was to come up and sniff at him, he’d bow up and maybe swat his tail at the dog because that’s his defense mechanism.

And he doesn’t bite.

“When he was a baby, babies in their natural instinct try to bite, but they have such tiny, tiny teeth. Unless you pull, you’re not going to get hurt because their teeth go back.”

“So if they just bite down and you don’t move, their teeth will go back and they’ll just bounce off of you,” JD said. “If you pull, it’ll rip.”

Comet travels with his “parents” wherever they go and has a wire dog crate with a comfy dog bed inside. JD said that Comet used to put his head out of the car window like a dog, but he can’t reach the window now in their SUV.

The pandemic has put a crimp on Bae-ring’s magic shows and street performing. He has to have a permit to do so, and his renewal was denied last year in Guilford County, he said, as Greensboro tried to get a handle on panhandlers, and street performers fell in the same category.

Then the pandemic hit and he’s been told it will be at least another year before his permit can be renewed.

He’s a manager trainee at a Pizza Hut in Archdale, which at least keeps Comet happy.

“Funniest thing,” he said, “Pizza Hut was the last place I worked for 16 years ago and I had to go back to Pizza Hut.”

Whenever he can get back to his magic shows, he hopes to start what he calls JD’s Coat the Children of America Tour in which he plans to visit a children’s hospital in each state. “We’d really like to do that,” he said.

For now, the family is a traveling show of a different sort.

“We take (Comet) everywhere,” Alicia said. “We went to Linville Falls for our anniversary and everybody wanted to take a picture, he’s probably all over Facebook, Twitter. We don’t do social media, but (JD’s) friends will say ‘I saw this on Facebook’ and send him a picture.”

And it wouldn’t be shocking to see Comet smiling.

The Pet Shop: Losing Blackjack was a double blow

In April, I said goodbye to my sweet Blackjack. He was almost 20 years old.

The Pet Shop: The tough decision to have a pet's leg amputated

Comet, a horn-nosed iguana from Honduras, strikes a pose.

Comet the iguana on a leash with JD Bae-ring. His wife, Alicia, is allergic to cats and dogs, so the couple decided to adopt a rescue lizard to give that a try.