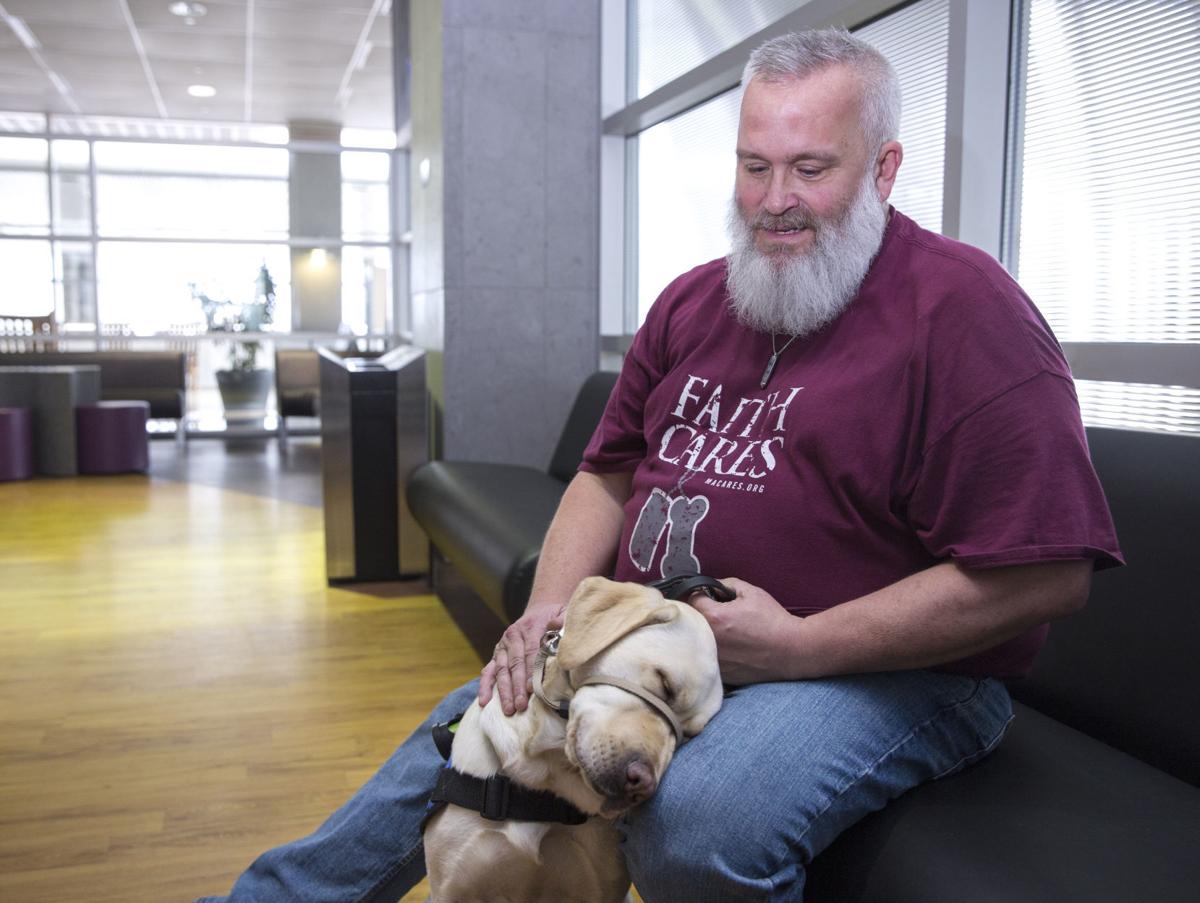 Keith Harrison pets his new service dog, Sookie. Harrison is a retired U.S. Army sergeant. He served in the Army and the Army National Guard for 24 years, including two combat tours in Iraq as a medic. 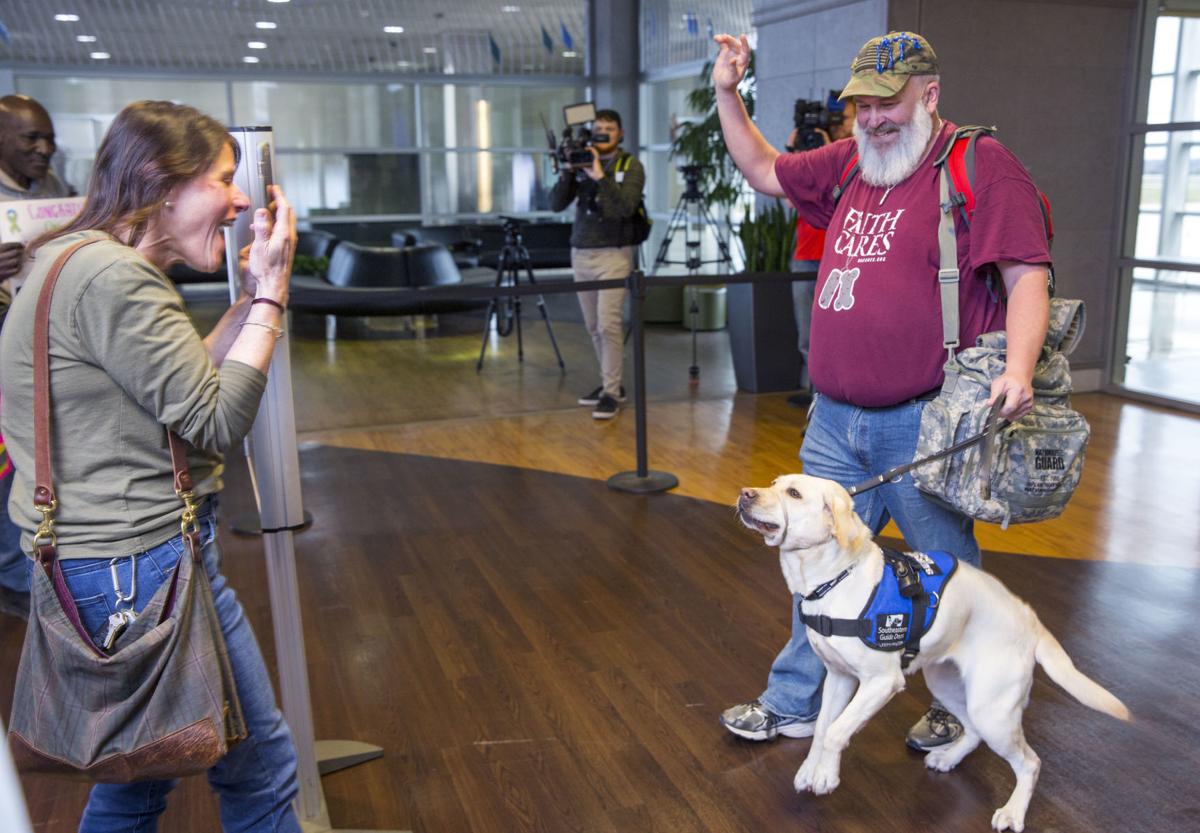 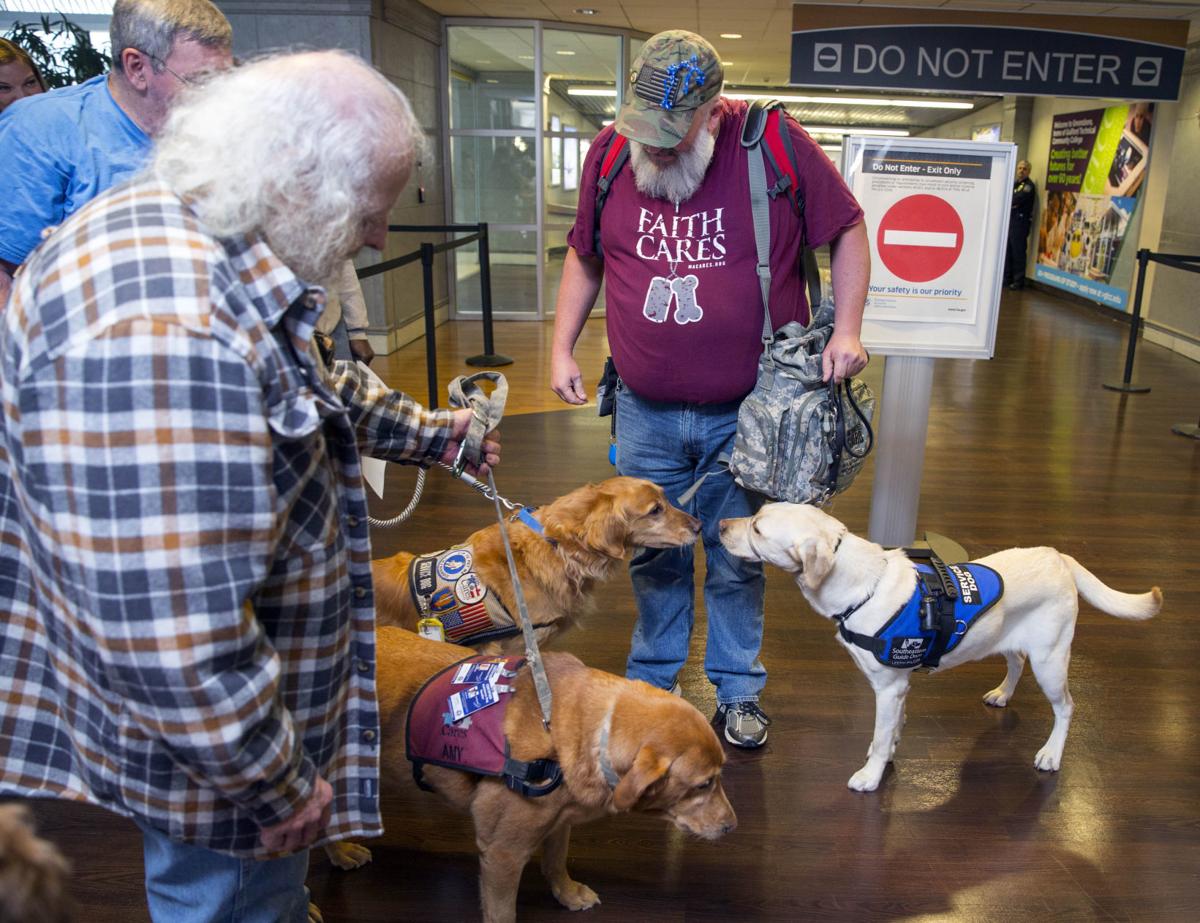 Vietnam War veterans let their service dogs meet Sookie, the new service dog assigned to Keith Harrison. Harrison will spend the next three months bonding with Sookie. Then Southeastern Guide Dogs will assess her to see if the bond is solid.

GREENSBORO — As Keith Harrison strolled up the concourse at Piedmont Triad International Airport on Thursday with his new partner in tow, the return home was bittersweet.

Sookie, a blond Labrador retriever, walked beside him, her blue vest marking her as a service dog.

Not long ago, service dog Elliott would have accompanied him on such a trip to help ease the war veteran’s anxiety and migraines.

But Elliott, who partnered with Harrison for eight years, died of cancer last summer.

So for this trip, he flew to Florida where he spent two weeks training with a new service dog.

When they returned Thursday, a group of about 15 people greeted the duo with signs that read “Welcome to North Carolina Sookie!” and “Keith + Sookie = Love.”

The 52-year-old Harrison, who lives in Thomasville, is a retired U.S. Army sergeant. He served in the Army and the Army National Guard for 24 years, including two combat tours in Iraq as a medic.

While there he suffered a concussion when an improvised explosive device detonated nearby. He now gets debilitating migraines, sometimes for as long as 24 hours. He also gets anxious indoors and in crowds, which doctors diagnosed as post traumatic stress disorder.

Medications and Botox injections helped the migraines, but not the anxiety. So Harrison turned to Elliott, a golden retriever, a service dog trained to recognize when Harrison was about to have a panic attack and to comfort him during his migraines.

Then in August, while sitting in the waiting room of an emergency veterinarian, doctors told him Elliott had a fast-moving, incurable form of cancer.

“One thing that got me through when I was at the emergency vet was a heart-shaped plaque with this poem called ‘Rainbow Bridge’,” said Harrison.

The poem is about the journey of a pet after death.

After losing Elliott, Harrison found out about Southeastern Guide Dogs, a Florida nonprofit that matches and trains guide dogs for the blind and service dogs for veterans.

It took the organization six months to find the right dog. During the wait, Harrison found himself retreating from the world like he had a decade ago before Elliott. So he was relieved to board the plane to Florida to meet Sookie.

A week into training, still unsure if Sookie was the right fit, something happened that led him to believe she was. He discovered a memorial garden and a small bridge on the grounds of the training facility with a sign that read “Rainbow Bridge.”

He remembered the poem in the emergency vet clinic.

“Elliott came flooding back to me and I lost it,” Harrison said.

Sookie moved close to comfort him.

“I was really shocked. I was like, ‘It’s too early for this’, ” Harrison said.

Harrison saw it was a sign that Sookie was the right choice.

“The way I looked at it, Elliott was wanting to meet Sookie,” said Harrison, who carries a pinch of Elliott’s ashes around his neck in a hollowed out bullet that also commemorates his time in combat.

Harrison credits maCares with helping him to have a service dog. The Greensboro-based nonprofit supports community causes, including a service dog support program to help the financial burden of caring for a service dog.

“We help them with the care of the dogs, such as food and veterinary bills, so they don’t have to worry about taking care of their buddy,” said maCares president Brandi Quinn.

At PTI Thursday, she joined a group of veterans with service dogs who get help from maCares to welcome Harrison and Sookie.

MaCares supports 18 people with service dogs. Part of that support, Quinn said, is helping people find their place in a world that often seems uncertain.

Harrison will spend the next three months bonding with Sookie. A trainer from Southeastern Guide Dogs will follow up on their progress.

But Harrison said they won’t stay at home.

“She needs to get used to what I like to do,” he said.

So Sookie will get to go fly fishing and play golf, activities that provide therapy for Harrison.

The first thing on their agenda once they get home though? Rest.

The Pet Shop: The tough decision to have a pet's leg amputated

Pet of the Week: Max

Pet of the Week: Luna

Keith Harrison pets his new service dog, Sookie. Harrison is a retired U.S. Army sergeant. He served in the Army and the Army National Guard for 24 years, including two combat tours in Iraq as a medic.

Vietnam War veterans let their service dogs meet Sookie, the new service dog assigned to Keith Harrison. Harrison will spend the next three months bonding with Sookie. Then Southeastern Guide Dogs will assess her to see if the bond is solid.