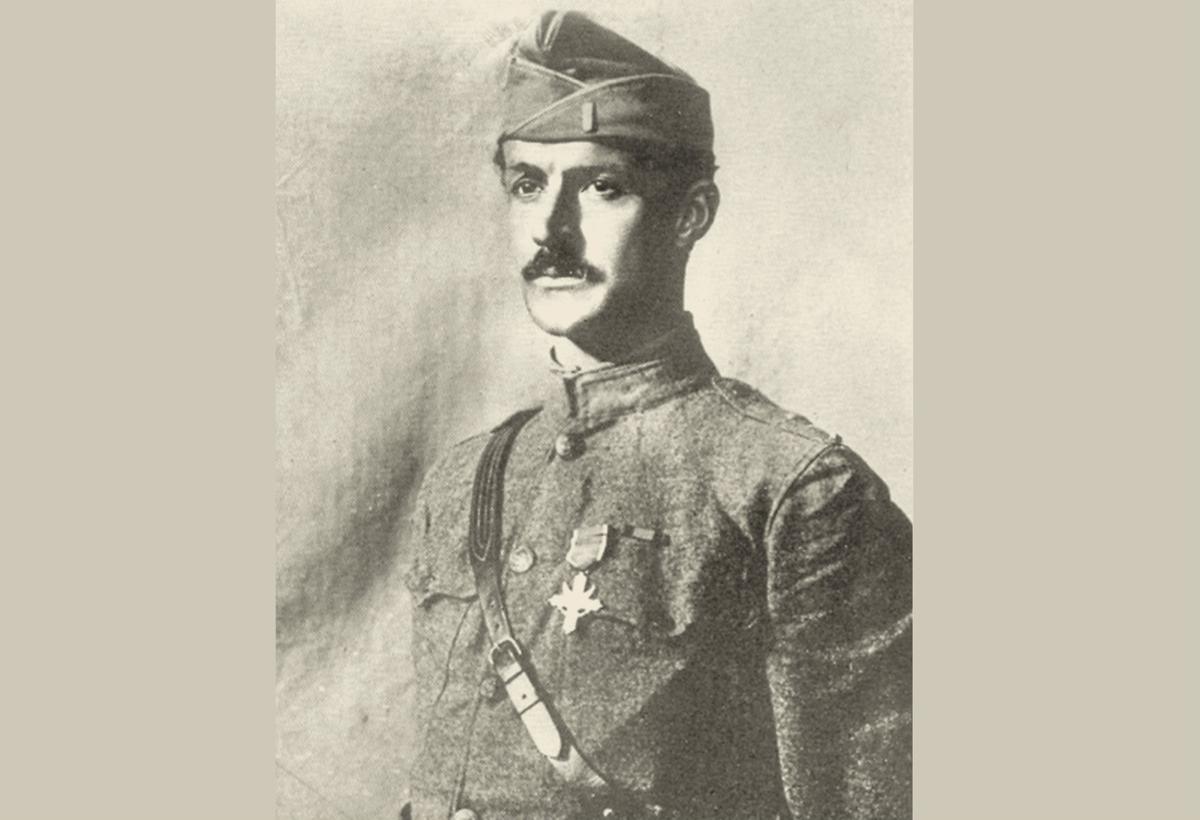 Lt. Robert Campbell won the Distinguished Service Cross for heroism in the waning days of World War I 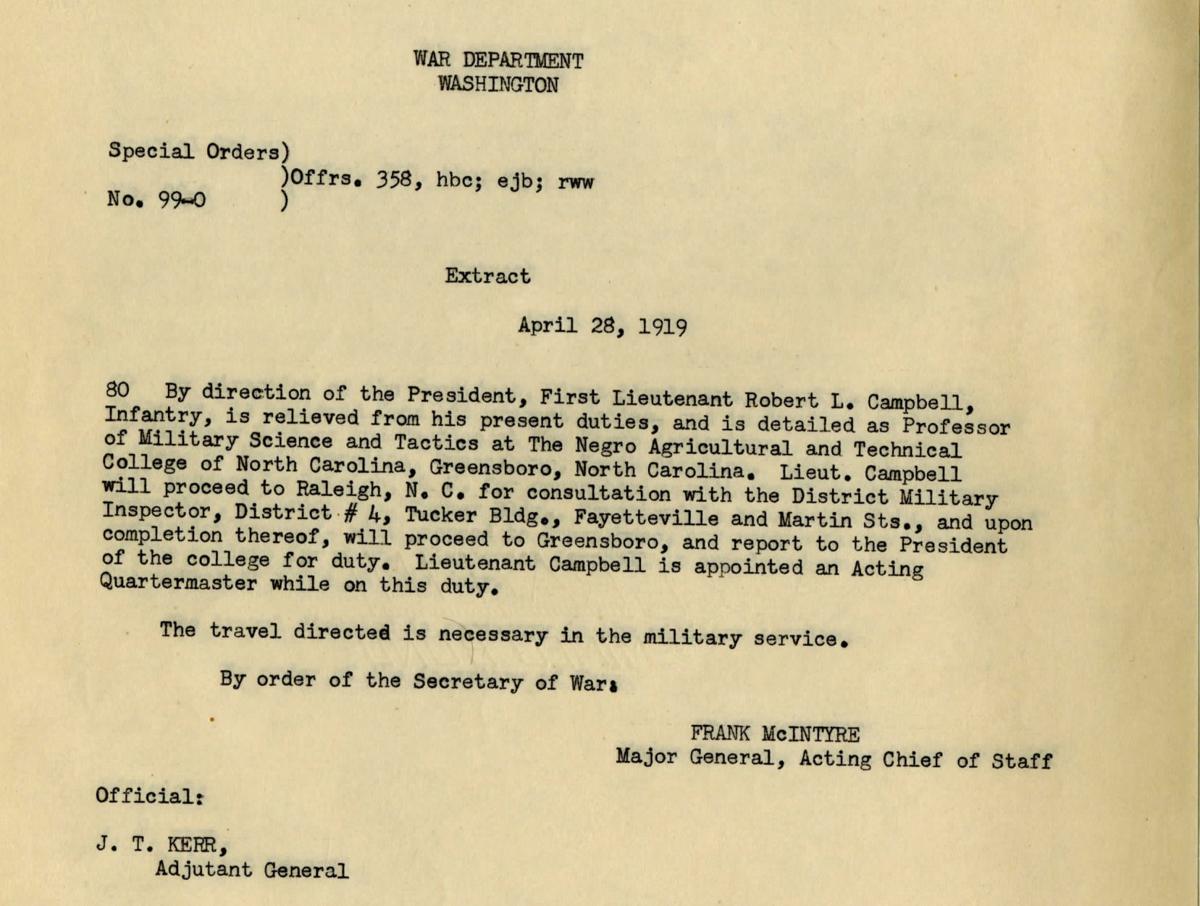 A copy of the War Department orders that assigned Lt. Robert Campbell to the school now known as N.C. A&T in 1919.

When I was working on a story last month on a long-ago Greensboro resident who worked at N.C. A&T and was a hero of World War I, the A&T archivist mentioned something in passing:

There's someone at a school in Missouri who's investigating whether Campbell and some other black soldiers should be awarded a Congressional Medal of Honor.

That tip from James Stewart turned out to be 100 percent correct. It also turned into a follow-up story on Lt. Robert Campbell, who worked at A&T from 1911 to 1949, minus a couple of years in France during the Great War and a few years at some other colleges thanks to the whims of the U.S. Army. Campbell, among other things, was A&T's first military science instructor. The ROTC building on campus is named for him.

Now for some links and more details:

• Here's a Park University news release from April that details the Valor Medals Review, the formal name of the effort set by in 2018 by The United States World War One Centennial Commission. Westcott and Jeffrey Sammons, a history professor at New York University, are the two lead researchers on this project. (Sammons, by the way, got his history Ph.D. at UNC-Chapel Hill.) If you'd like a more visual explanation, here's a short (less than 3-minute) video that explains the project.

• The project has gotten some media attention. Here's a CBS Evening News story that aired in early July. The CBS affiliate in Kansas City did 5 minutes — an eternity in TV — on the effort. In April, a Washington Post columnist wrote about Sgt. William Butler, the black soldier featured in the CBS Evening News report.

• Here's a quick history lesson via The National WWI Museum in Memorial in Kansas City. "Make Way for Democracy" is a short picture-and-text exhibit of the African American experience during World War I.

My thanks to Brad Biles at Park University for the links.

Speaking of Park, it's an interesting place. The main campus in Parkville, a Kansas City suburb, has about 1,600 students. Park has another 7,900 or so more students enrolled this semester in one of its 41 other campus centers across the country. Most of those campus centers are located at military bases. There's a North Carolina branch at the Marine Corps Air Station in Cherry Point.

Roughly half of Park's students are active-duty military or military veterans. When you add in dependents, 55 percent of the university's student are military affiliated. That's a lot compared to most other four-year schools. Westcott, by the way, is a veteran. So, too, are both of the undergraduates who are serving as research assistants for this project.

Update, 2 p.m. Thursday: Here's a little piece of history — a copy of Campbell's orders assigning him to A&T in 1919.

Former News & Record staffer Andre Taylor found this War Department letter several years ago when he was doing research on desegregation in the military. He posted this on Facebook today, I just happened to scroll past it and he gave me permission to share it here. Dre's now in the graduate program in public history at N.C. State University. Here's an example of some of the work he's been doing since he left the N&R.

Support my coverage of higher education. Click here to learn about digital subscriptions to www.greensboro.com.

Robert L. Campbell, who taught machining and military science at A&T, won the Distinguished Service Cross and the French Croix de Guerre for heroic acts in World War I. A program Saturday at the Greensboro History Museum will commemorate his life and service.

Could Lt. Robert Campbell of N.C. A&T be in line for a Medal of Honor?

A Missouri university leads an effort to review the military records of blacks and other minority troops who served in World War I.

The Syllabus: A big gift — and a new name — for UNC's J School

Media company owner and UNC-CH alum Walter Hussman Jr. gave $25 million to the university's journalism school. The school will be named for him.

Princeton University tops the rankings for the ninth straight year, and Elon University cracks the top 100 in its first year on the list of national universities.

The Syllabus: Your college campus speakers for September (mid-Sept. update)

Guilford County bought 79,000 laptops and iPads for schools, but most won't come for months