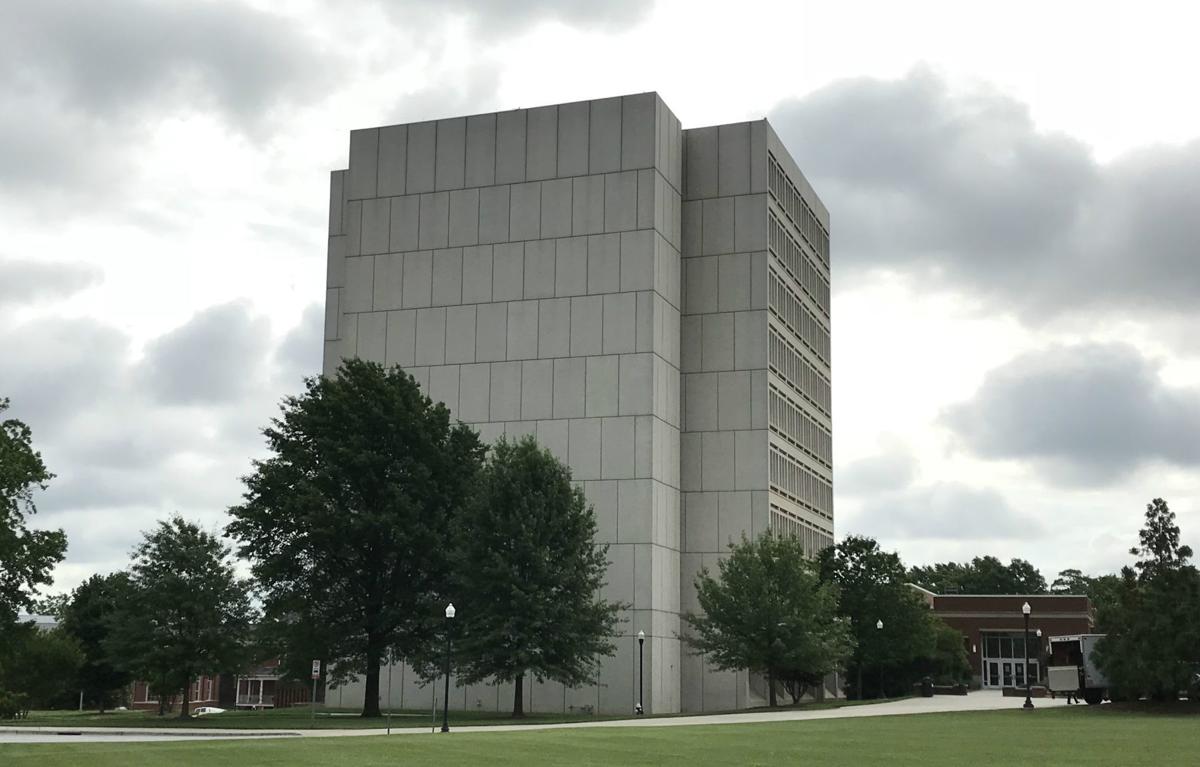 The back — and least flattering — side of UNCG’s Jackson Library. The nine-story tower opened in 1973. 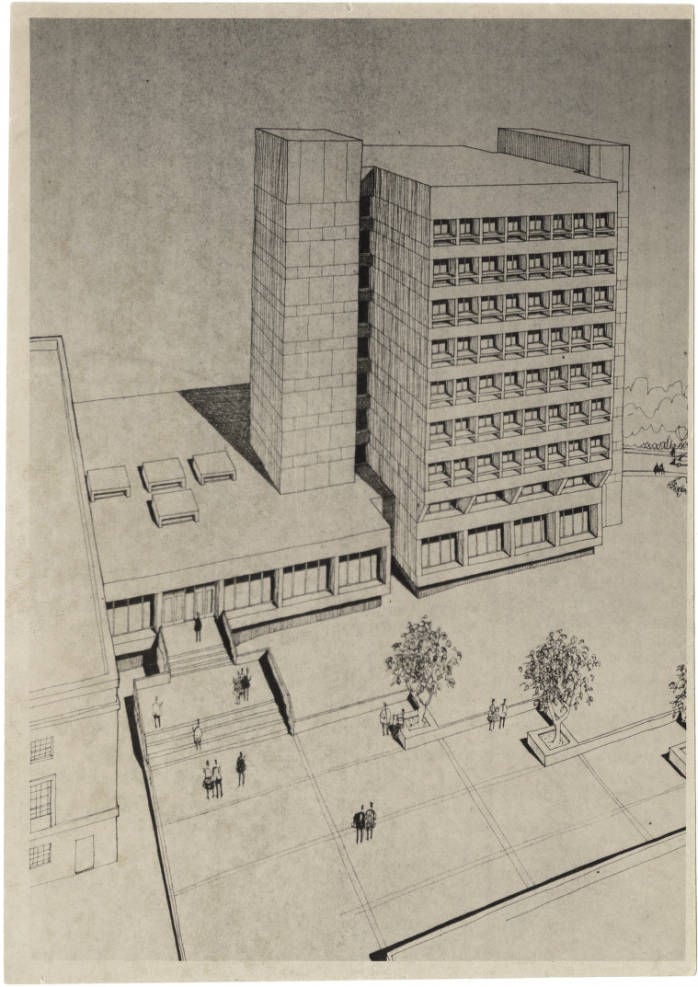 An architectural rendering of the Jackson Library annex that opened in 1973. The nine-story tower was designed by Odell Associates of Charlotte, who also designed the former Wachovia Building in downtown Greensboro and the former Burlington Industries headquarters on West Friendly Avenue in Greensboro. 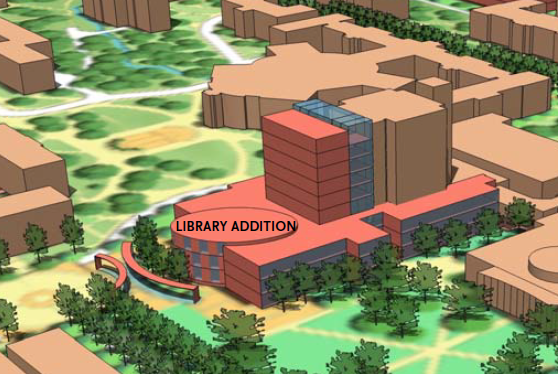 UNCG’s 2007 master plan proposed a major addition (in red) to the west side of Jackson Library. The project was never started.

If you approach UNCG from the west along Walker Avenue, you’ve probably noticed the nine-story mausoleum dead ahead* of you.

That white masonry building is not just a relic of Brutalism, a Soviet-era architectural style that has done more to ruin Greensboro’s look than strip malls and McMansions. It’s also the 120,000-foot addition to Jackson Library, UNCG's main library.

One problem, of course, is that the building is ugly, at least from the back side. The other and more pressing problem as far as UNCG is concerned is that the old and new portions of the library have barely been touched since they opened. (Jackson Library opened in 1950; the tower was built in 1973.) A related issue is that UNCG had about 7,000 students when it opened the tower. This fall, UNCG’s enrollment will be nearly three times as big.

At the Board of Trustees meeting in May, Martin Halbert, the dean of UNCG University Libraries**, laid out some of the issues with Jackson Library. It’s too small and it’s hard to find seats. (The library can seat only about 1,000 people at any one time.) There are few group study spaces. The furniture is dated and mismatched. Disabled persons can’t get to some parts of the building. There’s no fire suppression system in the annex. There are few plugs for laptops and phone chargers. And on and on. The word Halbert used is “obsolete.” From what I’ve seen of Jackson Library I can’t argue.

UNCG has known for years that its main library needs some help.

The first draft of the 2016 Connect NC bond set aside $20 million for UNCG library improvements. At the last minute, however, UNCG was able to trade up for a $105 million facility that would hold the nursing school and science labs. (I would have done the same thing, to be honest.) Now that work on the nursing and instructional building is under way, fixing up the library is UNCG’s top construction priority.

It’s tempting to dismiss library improvements as not worth the money in this high-tech age. Who needs all those books anyway when you’ve got the Internet, right? But university libraries remain popular places to study solo or to work on group projects. Students, professors and researchers all use the library, which has a surprising amount of high-tech stuff in it. (Libraries are not just books, in other words.) As Halbert (and others) see it, the library is the central crossroads of a campus as well as the hub of intellectual activity at a university. It’s not just a place to get books, in other words. It’s a place to get information.

At UNCG, Jackson Library remains popular. Halbert says about 1.25 million people come through the doors of Jackson Library every year. Roughly 10,000 UNCG students use the library at least once per week.

Halbert told me that UNCG could get a lot done for $20 million. He estimated that, done right, a top-to-bottom renovation and expansion project would cost somewhere in the neighborhood of $60 million.

Money, of course, will be the issue, as it always is. But the legislature during its short session this year came through with some cash for university projects. The new spending plan gives UNC-Wilmington $5.5 million to start planning for an expansion of its library, which was last added onto in 1987. Maybe UNCG will be next in line.

** “UNCG University Libraries,” plural, is correct. That’s because UNCG has two libraries — Jackson Library, which I wrote about above; and the Harold Schiffman Music Library, which is in the School of Music Building.

Have something to say about something you just read? Email me at john.newsom@greensboro.com.

The state's library consortium will find and recommend open-access textbooks to professors at public and private universities and community colleges.

The Syllabus: High winds and heavy surf for some local colleges

One area college will close, and two others are having issues with accreditation.

The Syllabus: High winds and heavy surf for some local colleges

One area college will close, and two others are having issues with accreditation.

Your annual look at the books that some North Carolina colleges and universities assigned to their incoming first-year students.

The Syllabus: Want summer reading ideas? What the university freshmen are reading

Your annual look at the books that some North Carolina colleges and universities assigned to their incoming first-year students.

A new Spartan — and a new look — at UNCG

The university revamps its main athletics logo and tweaks the school colors.

The state budget approved by the Republican-led legislature but vetoed by the Democratic governor contains $84 million to renovate UNCG’s library and $18.5 million in repairs for an A&T agriculture building.

Every so often, colleges and universities put out new master plans that show what sort of things they’d like to build on their campuses.

The Syllabus: The UNC System and the state budget

Here's what the state university system could get out of the short session budget plan.

The Syllabus: Going beyond the transcript at Elon

The Syllabus: A million more low-income and first-gen college students

The College Advising Corps plans a huge expansion of its work to help students get into college.

The back — and least flattering — side of UNCG’s Jackson Library. The nine-story tower opened in 1973.

An architectural rendering of the Jackson Library annex that opened in 1973. The nine-story tower was designed by Odell Associates of Charlotte, who also designed the former Wachovia Building in downtown Greensboro and the former Burlington Industries headquarters on West Friendly Avenue in Greensboro.

UNCG’s 2007 master plan proposed a major addition (in red) to the west side of Jackson Library. The project was never started.