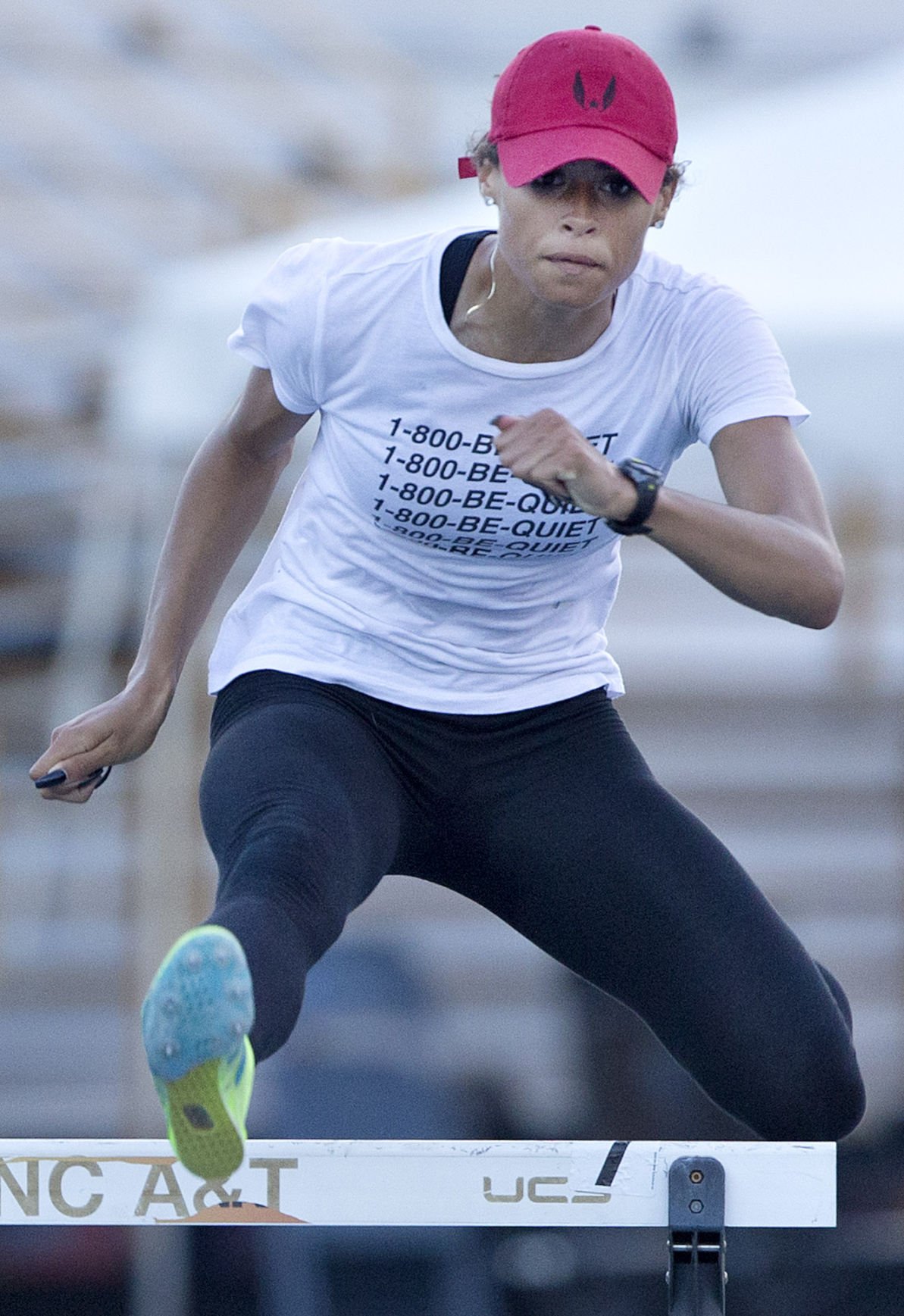 Olympic hurdler Sydney McLaughlin, 17, during a workout at Aggie Stadium on Thursday night. 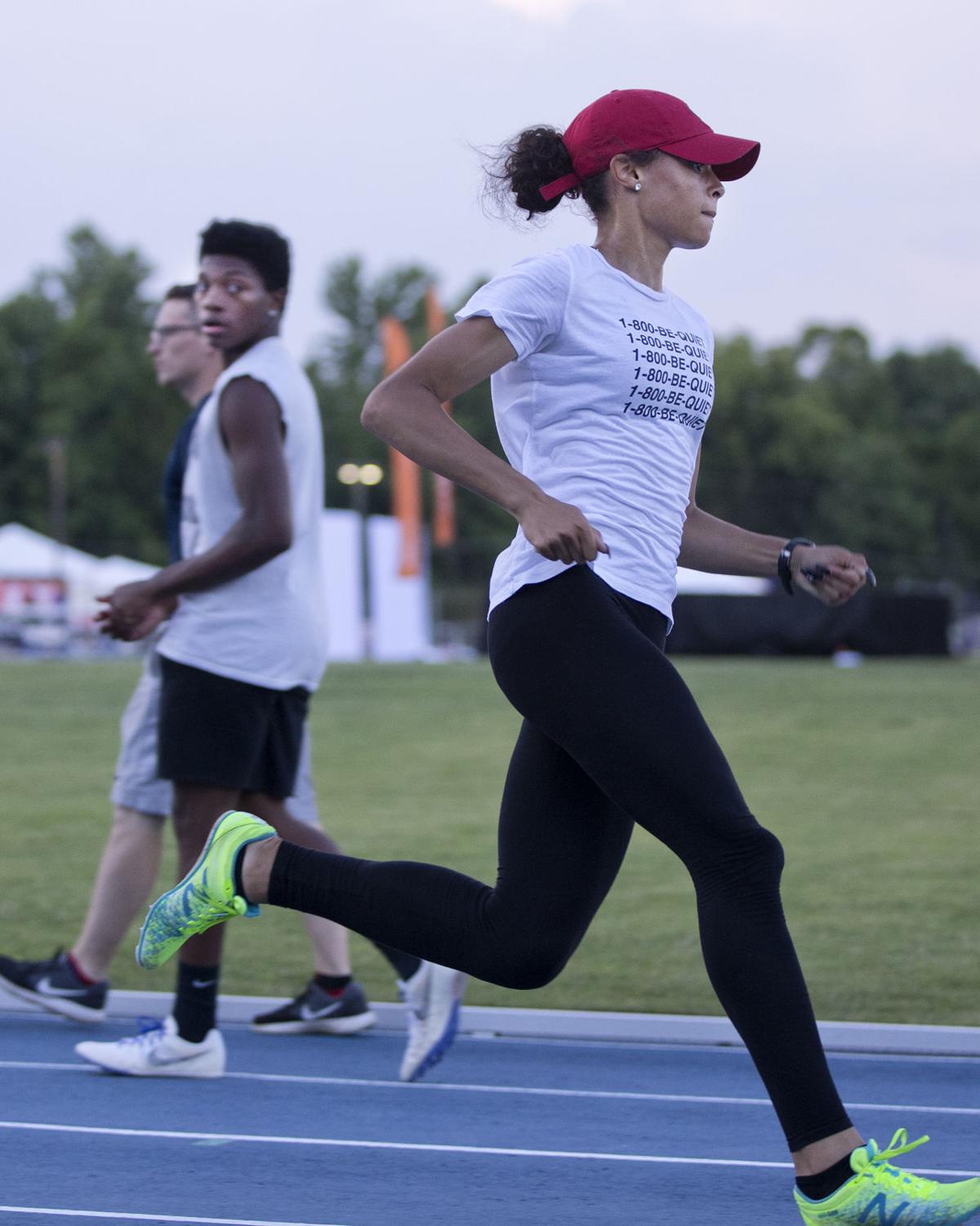 Sydney McLaughlin, after making the 2016 U.S. Olympic track and field team as a 16-year-old, is turning heads in the sport. 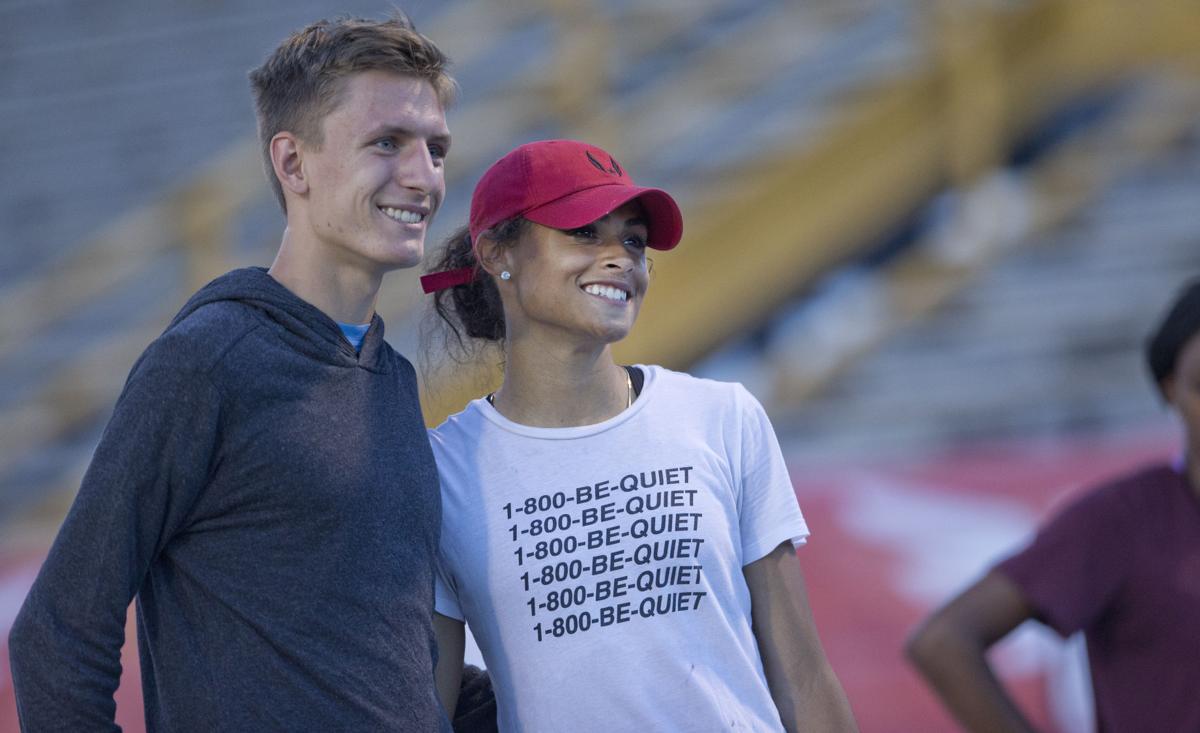 Sydney McLaughlin with a fan on Irwin Belk Track inside Aggie Stadium. 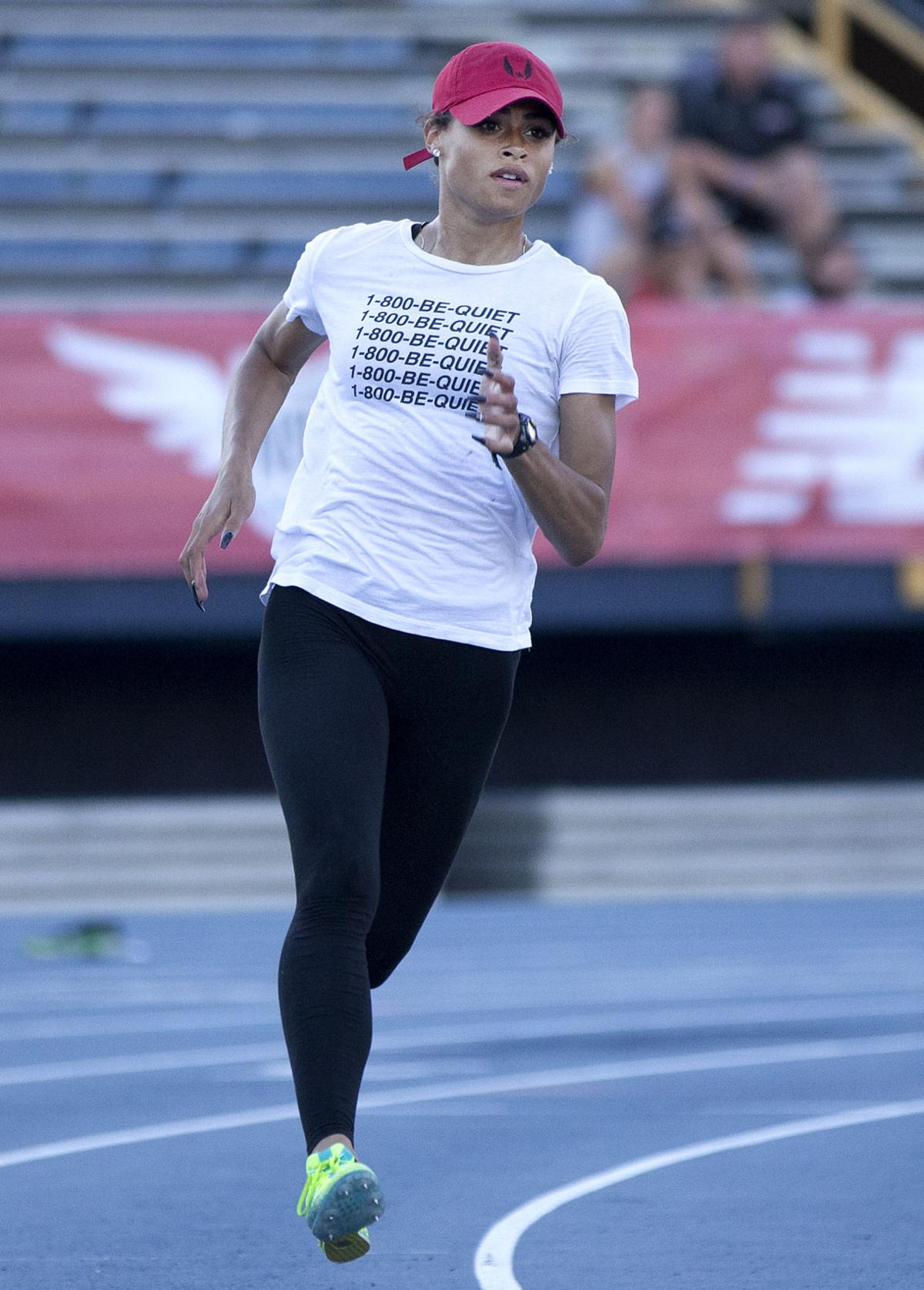 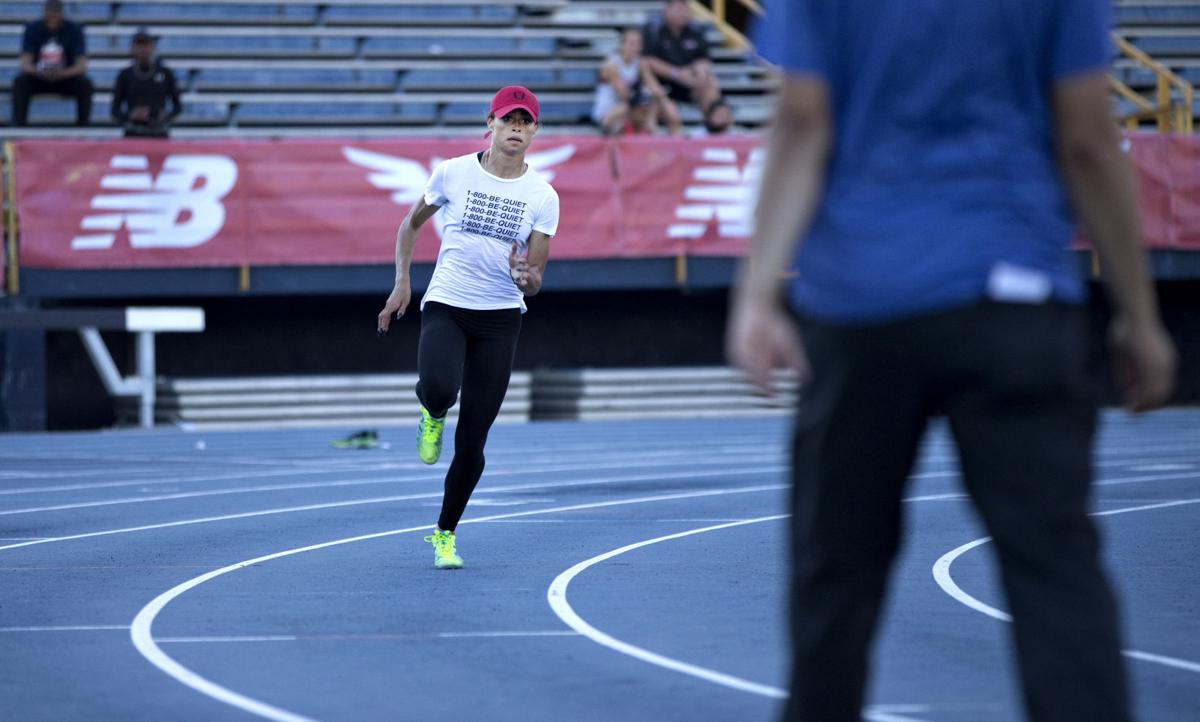 Sydney McLaughlin during a short workout at Irwin Belk Track inside Aggie Stadium. 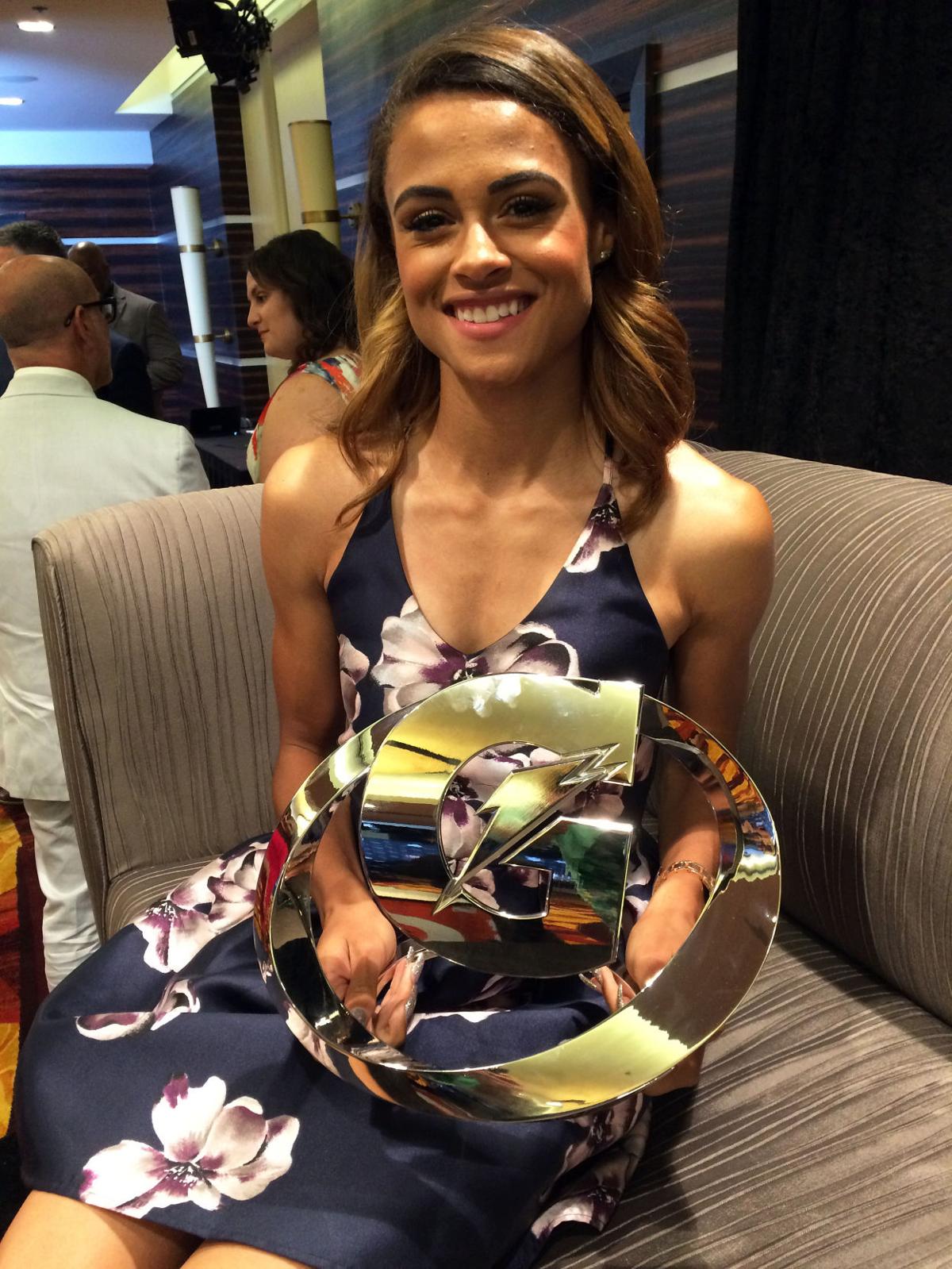 Sydney McLaughlin earned the national high school athlete of the year award in 2016.

GREENSBORO — Aside from the world junior and national records, aside from the comparisons to LeBron James as the best-ever high school athlete and aside from becoming the youngest runner to represent the United States at the Olympics since 1972, Sydney McLaughlin isn’t all that different from anyone trying to grind out a few miles after work.

“It’s part of the process, everyone has those bad days and I think everybody needs them,” McLaughlin says. “Those bad days are important to get on track, but you don’t want every day to be a bad day.”

There haven’t been many bad days for McLaughlin since she set a New Jersey state record during her first indoor meet for Union Catholic High School.

“I was like, ‘OK, maybe there’s something here,’” McLaughlin says, smiling.

Since then, she has gone on to set a world junior record in the 400-meter hurdles and three national records and win six individual national championships, in addition to running in the 2016 Olympics in Rio de Janeiro.

And despite all of that, McLaughlin, who hasn’t lost a race since June 14, 2014, arrived in Greensboro for this weekend’s New Balance Nationals at A&T's Irwin Belk Track battling the same nerves that hit her before every race — for county or country — and the finality of one last run with her teammates.

“It’s great place; I love the track, so many great memories and a lot of great times that have been dropped,” McLaughlin says. “It’s a little sad this is my last race as a high schooler … hopefully me and my team can come out here, do what we do and just run really fast.

“I don’t think there’s ever a time when I don’t get nerves. Every race is a race, regardless of the competition level, where I’m at, who I’m racing.”

This represents one of the last chances for McLaughlin to hold on to one thing that has been most important for her as her can’t-miss stardom took off and she built an Instagram following of 143,000 as a future face of American women’s track and field.

“People do see the Olympian more than they see the person sometimes, but then they talk to me and they realize, ‘Oh, you’re normal,’” she says. “I’m like, ‘Yeah, I’m normal.’ You know, it’s just a title; it doesn’t mean anything.”

After her arrival at Aggie Stadium on Thursday night, only thing that set McLaughlin apart was her spot out in front, leading her teammates as they shook out the cobwebs after a 12-hour bus ride. As they joked around in the bleachers, she was just another face in the crowd of high school athletes carrying the coveted New Balance backpacks.

That starts at home for McLaughlin, who comes from a track family. Her father, Willie, made the 1984 Olympic Trials, while her mother ran in high school. Her brother Taylor, who runs at Michigan, was second in 400 hurdles at last year’s world juniors.

“They’re real humble and they enjoy the sport, but they have other interests in life around it, so their whole lives haven’t been encompassed by it,” Union Catholic coach Mike McCabe says.

That’s a major reason McLaughlin has been able to focus on running this season rather than being consumed with decisions on her future. Easily, she could be putting pen to paper on a professional contract right now, but that was never part of the plan.

She committed to Kentucky in November, dropping a few selfies in Wildcats gear on social media along the way, just like any high school student who received an acceptance letter.

The chance to train under Edrick Floréal, a former Olympic jumper, sold her on Kentucky, but the chance to be a college student is what made her hold off on turning pro.

“I wanted to get the college experience,” she said. “Being able to be on a college campus, having a roommate, go to class, go to practice and be normal for a little bit, hopefully, before I decide to make that next step.”

That remains two steps away, though, as McLaughlin finishes off her high school career in a meet that has been kind to her. Last year, she ran the final leg of the 400 relay in 50.93 seconds, helping lift Union Catholic to victory and setting a national record in the process.

After scorching A&T's blue Mondo in a 49.85-second 400-meter split for Union’s winning 1,000-meter sprint medley relay team this afternoon, she’ll finish her career with her two signature events on Sunday, running the 400 hurdles at 4 p.m. and finishing with the 400 relay at 5:45.

It would be easy for her to collect her gold in the hurdles and get out of town ahead of next week’s USATF Outdoor Championships in Sacramento, Calif., but that’s not McLaughlin.

It isn’t always that way for elite talents, who don’t always have the team in mind.

With the USATF event opening the door to the IAAF World Championships in London, coaches have to be wise in looking out for her best interests in what she does and doesn’t run with her team.

“It is important to her and that can be a burden on her without her saying that or realizing that,” McCabe said. “It’s a fine line, letting her and allowing her to be a part of the team, so it doesn’t hurt her when she goes to the really, really big stuff.”

But for McLaughlin, one last run with her teammates is really, really big stuff.

“Every high school athlete wants to come to nationals,” she said. “This is the big thing at the end of the season; you get the bag, you get to race with the team and you get to stand on the podium and be All-American.

“Besides running fast times, what I’ve always wanted to do is be a great leader for the team and over the four years, not only have they helped me grow as a track athlete, but as a person.”

Road, trail and virtual races in Greensboro, Winston-Salem, High Point, the Triad and beyond.

WATCH: N.C. A&T senior Victor Solomon advances to the audience-voting round of "The Voice"

College basketball is religion in NC. But its future, allure of UNC and Duke are in doubt

Olympic hurdler Sydney McLaughlin, 17, during a workout at Aggie Stadium on Thursday night.

Sydney McLaughlin, after making the 2016 U.S. Olympic track and field team as a 16-year-old, is turning heads in the sport.

Sydney McLaughlin with a fan on Irwin Belk Track inside Aggie Stadium.

Sydney McLaughlin during a short workout at Irwin Belk Track inside Aggie Stadium.

Sydney McLaughlin earned the national high school athlete of the year award in 2016.