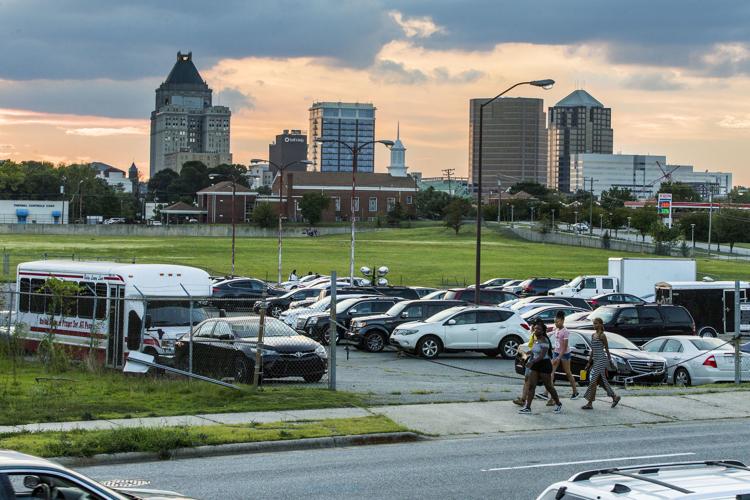 This empty lot along East Market Street across from N.C. A&T, pictured in September 2018, is being developed into an apartment complex with retail space and room for a grocery store. 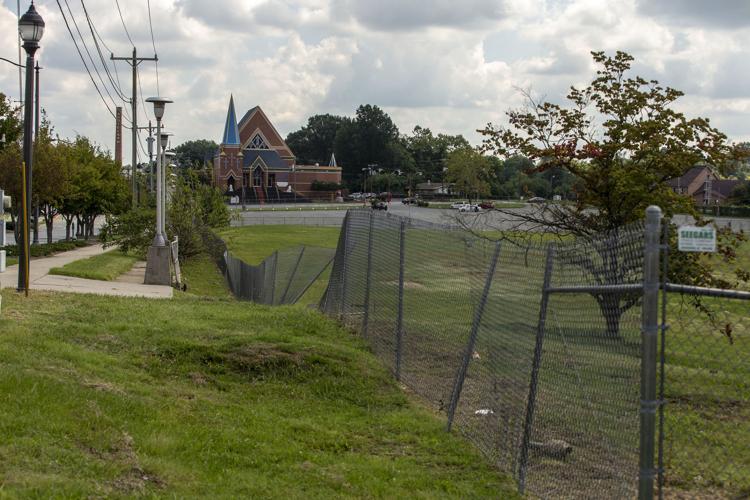 This empty lot along East Market Street owned by the United House of Prayer, seen in the background in this September 2018 photo, is being developed into an apartment complex with retail space and room for a grocery store. 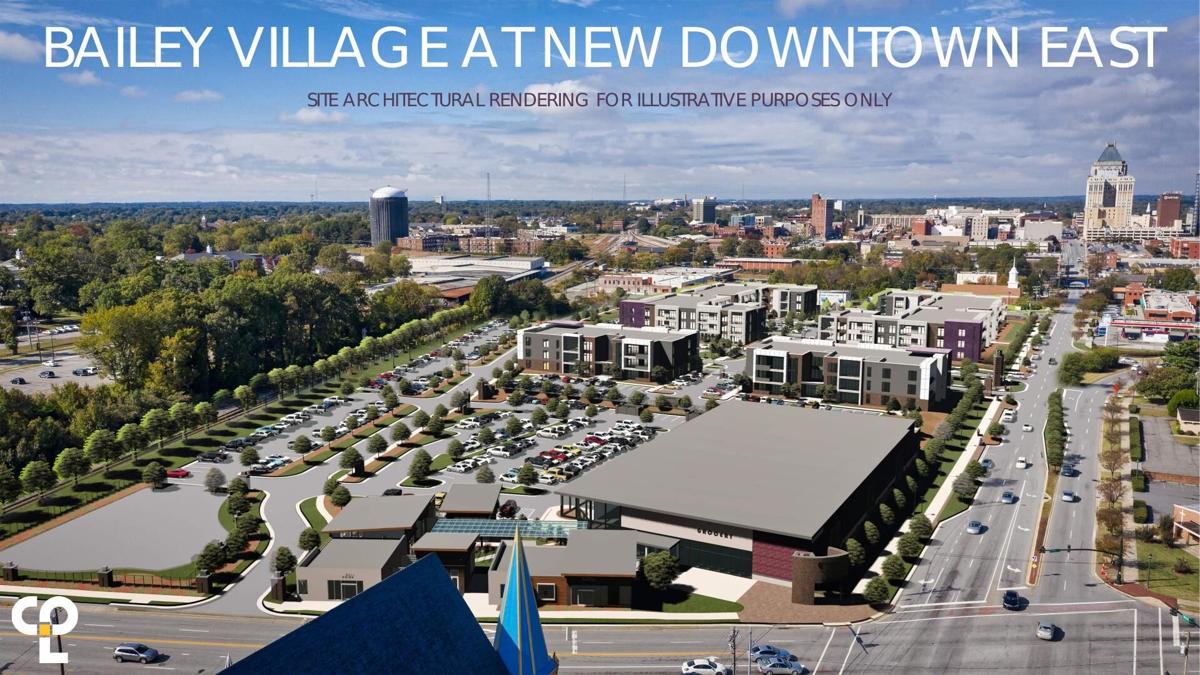 GREENSBORO — The 13.7-acre site at the intersection of West Market and South Dudley streets in east Greensboro has been unused for roughly 15 years.

But the United House of Prayer for All People, whose Greensboro church is across Dudley from the property, invested for the long term.

Now, after more than a decade of rumors and hopes for massive development on the site, the church has begun construction of what it calls Bailey Village at New Downtown East: Apartments, retail and recreational space that will link downtown with N.C. A&T.

The market for apartments is growing in Greensboro and the church said Thursday in a news release that it has been encouraged by the ongoing construction and interest in downtown.

The Washington, D.C.-based church bought the property, which had been owned by the U.S. Postal Service, in 2005. Within several years, the Postal Service building had been torn down and the property turned into a big, grassy vacant lot.

Now, construction fences have gone up around the property as Barnhill Contracting Co. begins its work.

Mayor Nancy Vaughan said she is excited about the project.

"This is good news for East Greensboro," Vaughan said in a text message. "It represents a substantial private investment in an area that has been overlooked by other private investors. This announcement is the culmination of many years of deliberation by the United House of Prayer. UHOP will be providing housing and retail operations not available near the N.C. A&T campus." 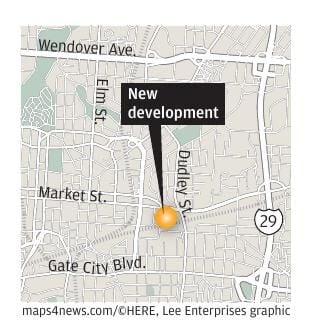 Vaughan said the project will complement the $90 million engineering and research building under construction at A&T.

United House of Prayer, which is a predominantly African American congregation, said in the news release that it has pledged to use minority subcontractors and suppliers on the project. (Information changed to correct an error. Please see correction below. 5:02 p.m. Dec. 4)

The project, which will be built over two years, includes:

• 172 apartments with one-, two- and three-bedroom units.

• Up to 30,000-square-feet of space for a future national anchor grocery retailer.

• Up to 6,000-square-feet of space for community support retail: restaurants and national service vendors.

The church said in its news release that the development will have walkable internal streets, parking areas, a dog park, and a unique “linear green” space that will serve as a recreational and activity area for residents.

City officials have been discussing plans for the project for years and the land has become a well-known gap between the Norfolk Southern trestle on East Market and the A&T campus.

The development will be about a block from the new Downtown Greenway being developed by the city and Action Greensboro, just east of downtown Greensboro and near A&T and Bennett College.

A church spokeswoman could not give a total value of the project, but called it "significant."

She could not say whether the apartments would include affordable units or what the rental rates would be. She also said that the developer does not yet have a clear prospect for a grocery tenant.

Advocates for residents of east Greensboro have for years said the area is a "food desert" where a well-known grocery chain would make a big impact.

“It is awesome to see this development come to fruition,” said Zack Matheny, CEO of Downtown Greensboro Inc., the downtown district’s economic development agency. “It is a true blessing for the entire community, starting with East Greensboro and extending beyond. I congratulate the church for their vision in moving forward.”

A city staffer said two years ago when plans first surfaced for the property that it is already zoned for the type of planned-unit development that UHOP hopes to build.

The development will extend the reach of downtown, which has seen a construction boom with about $250 million in projects finished or under way in the past two years. In the northern end of downtown, the Carroll Cos. recently built Carroll at Bellemeade, a $70 million hotel and apartment project at Bellemeade and North Eugene streets.

In March, Carroll said it will build a 12-story hotel on North Eugene Street across Bellemeade Street at the Carroll South of Ballpark project. The hotel will carry the AC by Marriott brand. The company said that the hotel will complement its Hyatt Place hotel across North Eugene from the new hotel.

Project Slugger is a 110,000-square-foot office building under construction by Front Street Capital across Bellemeade on the property of First National Bank Field, where the Greensboro Grasshoppers play. The Tuggle Duggins law firm will be the building’s anchor tenant.

The UHOP land is also only three blocks from the former home of the News & Record, which occupies 6.5 acres between East Market and Hughes streets and Davie and Church streets that have been under contract with an unnamed developer. The News & Record moved into new office space outside downtown in June.

United House of Prayer's development arm has a track record of developments in seven cities from Boston to Augusta, Ga. They include a six-unit development in Charlotte and a 30-unit renovation near the Apollo Theater in Harlem, N.Y.

Correction: This article incorrectly described Barnhill Contracting Co. as a minority company when it first published online. The story should have said United House of Prayer is a minority organization and has pledged to use minority subcontractors and suppliers on the project.

A South Carolina automotive group is entering the Triad marketplace in a major way by spending $65.2 million to purchase the properties of fiv…

United Furniture Industries Inc. has stopped production abruptly at its six Triad facilities — where it was reported to have had between 600 and 880 employees — as part of what appears to be an overall shutdown of the business.

This could be the last holiday shopping season for Sears

It's been a slow, quiet death for the iconic chain, whose groundbreaking catalog and anchor position at many malls nationwide once made Sears both the Amazon and the Walmart of its day.

Are you struggling to find the perfect present right now? Try these tips if you're considering gift cards.

States that collect the most in property taxes

Here's a look at how much states collect in property taxes each year, according to Census Bureau data.

Cyber Monday deals raked in billions, What to know about Congress' role in rail strike, and more business news ICYMI

Adobe Analytics forecasted that Cyber Monday will remain the year’s biggest online shopping day and rake in up to $11.6 billion in sales. Get more of last week's business news here.

Why are there no cheap EVs?

The large, costly battery that takes the place of an internal combustion engine make EVs more expensive. But there are other factors driving up the price.

A growing number of health systems across the country are now charging for some types of messages sent through online patient portals, such as MyChart, with fees often around $35 or less.

Food price inflation should slow in 2nd half of 2023, says expert

This empty lot along East Market Street across from N.C. A&T, pictured in September 2018, is being developed into an apartment complex with retail space and room for a grocery store.

This empty lot along East Market Street owned by the United House of Prayer, seen in the background in this September 2018 photo, is being developed into an apartment complex with retail space and room for a grocery store.