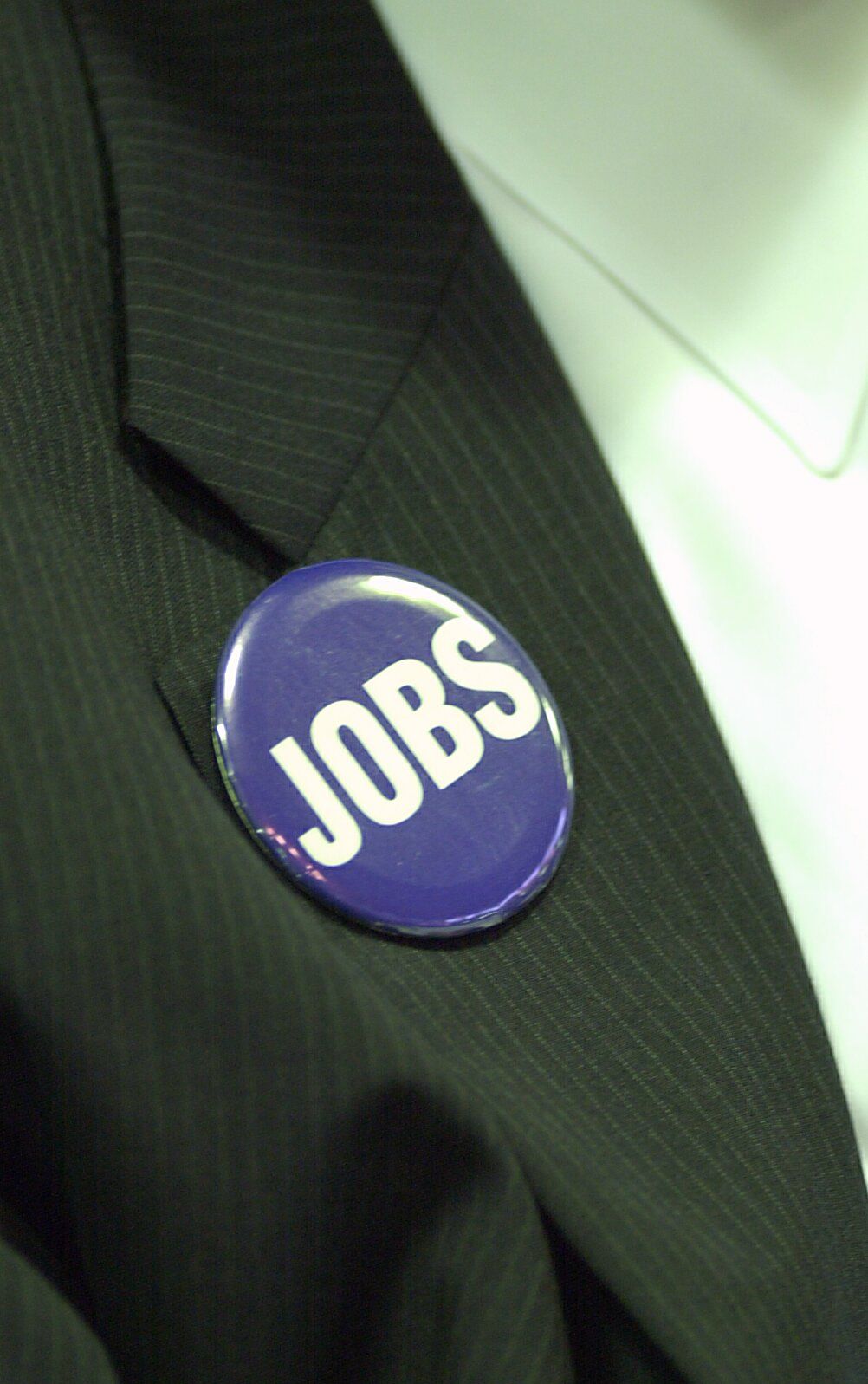 Lynn Hey/News & Record Many JOBS buttons were displayed by supporters of the proposed package of incentives to bring a Dell factory to the Triad during a session of the legislature in 2004. 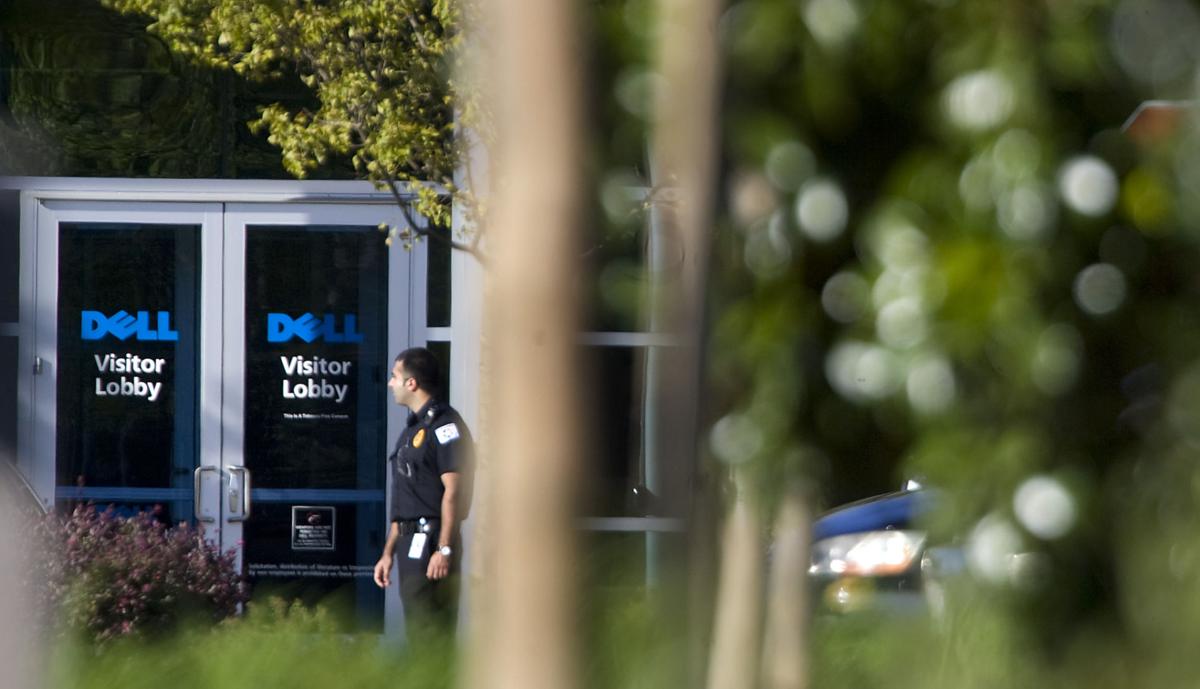 Nelson Kepley/News & Record During its few years in the Triad, Dell’s penchant for secrecy, particularly about layoffs, created some controversy. Earlier this year, the Winston-Salem City Council summoned Dell executives to give details of rumored layoffs at its plant on Temple School Road near Kernersville.

Dell’s decision Wednesday to close its Forsyth County plant left 905 employees, business leaders and a community confounded by a reality that simply did not compute.

Losing one of the Triad’s corporate prides and joy shocked and surprised those who had embraced the plant as a bright sign for a new economic future.

In return, Dell was offered its own treasure: nearly $280 million in state and local incentives. More than

$37 million of that was promised from Forsyth County and Winston-Salem.

The company quickly pledged to abide by its contracts and repay much of the money it had received. In a news release, Winston-Salem said that Kip Thompson, a vice president for Dell, met with Mayor Allen Joines on Wednesday to say the company would repay $15.56 million the city had provided since Dell agreed to build a plant.

That pledge won’t lessen the sting of massive layoffs hitting area counties during this harsh recession.

“This couldn’t come at a worse time,” said Don Jud, professor emeritus at UNCG’s Bryan School of Business and Economics. “This exacerbates our problem for a continuing recovery.”

An eight-county Piedmont area has lost 30,000 jobs in the past year, including 11,000 in manufacturing, Jud said.

Dell is trying to mitigate the layoffs with an employee severance package that includes pay and health insurance, as well as partial bonuses, according to David Frink, a company spokesman. The pay package includes two months’ salary plus one week of pay for each full year of service at the plant, in addition to two months of paid health insurance and partial bonuses.

Frink said the company’s fight to keep a lid on costs and boost productivity, as well as a changing market, brought Dell to its decision. More consumers want laptop computers, and the Winston-Salem plant churned out desktop computers for businesses.

Because of the deep recession, corporate spending on technology has been down dramatically.

Gayle Anderson, president of the Winston-Salem Chamber of Commerce, had followed the industry’s challenges, but that didn’t blunt the effect of Wednesday’s announcement for her.

“Obviously, the computer business has been changing and we had seen Dell downsizing over the last year or so, but this was a complete surprise,” she said.

She said Dell’s employment figures fluctuated between highs of 1,200 and 1,500. Some of those were contract employees. She said recent layoffs included about 300 Dell employees and 300 contract workers.

Dell chose North Carolina after the state and local governments pledged incentives that required Dell to meet certain hiring goals and invest at least $100 million in the plant and equipment.

Dell has received far less than the $10 million to $20 million per year in tax credits the company could have pulled down had it met its projections.

The state departments of revenue and commerce supervised the state’s programs.

“We’re still trying to make sure we have that information ... we’re still pulling it together,” said Kathy Neal, an assistant secretary and spokeswoman for the commerce department. She also noted that all the performance-based incentives granted by the state have “clawback” provisions that would allow North Carolina to recoup its investment.

Opponents of the massive incentives pledge did not gloat over the loss of Dell.

Robert F. Orr, a former N.C. Supreme Court justice and executive director of the N.C. Institute for Constitutional Law expressed the center’s concern for Winston-Salem. Orr sued the state to overturn the incentives but ultimately lost.

“No matter how big the incentive package, operational decisions by businesses headquartered out-of-state will be driven by corporate financial considerations and not by any sense of loyalty to the community being left behind,” he said in a statement.

U.S. Sen. Kay Hagan, a Democrat from Greensboro, helped lead the effort in the General Assembly to grant Dell state incentives in 2004.

She expressed her disappointment Wednesday and said she expects the company to make reimbursements.

“Today’s announcement is a stark reminder of the economic and human impacts of this recession,” she said.

Dan Gerlach, now president of the Golden Leaf Foundation, was a senior adviser to then-Gov. Mike Easley and one of the state’s leading negotiators on the deal.

At the time, luring Dell was seen as a way to bring in a high-tech manufacturer who could replace job losses in industries such as textiles and furniture.

“This is not a buggy whip manufacturer,” Gerlach said at the time. “Computers will still be needed for a long time.”

Gerlach said Wednesday he was most worried about the workers who lost their jobs.

“I am surprised because I thought it had a lot of potential,” Gerlach said. “But five years ago, I didn’t imagine the depths of the current economic recession. … At the time, it had the potential to help a lot of people.”

In Guilford County, Dan Lynch, president of the Greensboro Economic Development Alliance, said, “it is safe to say we all celebrated that victory together and we will grieve in unison as well.”

During its brief history, the Dell plant drew controversy over its reputation for secrecy, especially about layoffs.

Earlier this year, the Winston-Salem City Council summoned Dell officials to explain the details of rumored layoffs at the plant.

Now, with 905 workers soon to be losing their jobs, individual dreams are broken along with the region’s hopes that the plant would become the hub for a blooming sector of clean, high-tech industry.

“We went after it at a time when the region needed a boost,” Leak said.

“This was a company that was going to create a very large number of jobs. At the time it was a great boost to the community and the region,” he said. “I don’t regret that we went after the project as hard as we did at all. I suspect we would do it again given the chance.”

The Dell campus in the Triad sparked a bidding war of incentives among municipalities, which offered various packages in 2004 to lure the desktop computer manufacturing center.

Here’s what they offered:

Winston-Salem won the war, and with the Forsyth County offer and a land deal, the total package rose to $37.2 million, which Dell took along with incentives from the state. In return, the company was expected to create at least 1,500 jobs and invest

Why you should know your parents' retirement plans

Why you should know your parents' retirement plans

RALEIGH — Local tech executives see their post-pandemic future and it looks like this: Most of their employees will keep the ability to work r…

What financial pros have to say about inflation fears

What factors are driving these inflation fears? Plenty. Also, check out more of the week's best finance reads from experts at NerdWallet, The Motley Fool and Forbes.

Classic Dyestuffs is asking the city to rezone 3.4 acres surrounding its facility at 301 Brentwood St. for a possible $5 million, 40,000-square-foot expansion.

Craving a hot dog? This North Carolina spot named one of best places to get one in U.S.

The Charlotte-area's Chili Man earned a spot on a list of the top 25 places to eat a hot dog in the United States and Canada, according to rankings by restaurant review website Yelp.

End of an era: Thrifty Oil to close full-service station that has served Thomasville area for nearly 80 years

Bio-Adhesive Alliance Inc., which makes products from swine manure that can be used as a substitute to petroleum-asphalt adhesive in the construction industry, pleaded guilty in March in U.S. District Court in Greensboro to two counts of making false statements. It was sentenced Monday to repay $562,500 to the National Science Foundation and $319,199.69 to the Environmental Protection Agency.

The twice annual market, which ended its spring show on Wednesday, saw about 80% attendance compared to pre-pandemic events. That's a sharp increase from the October 2020 Market, which was down about 60%, said Tom Conley, president and CEO of the High Point Market Authority.

The buyer is Penry Property Owner LP, an affiliate of Torchlight Investors.

Investing can be difficult, but the 401(k) is one of the easiest ways to start. Many of theses tips focus on small changes, and then you can let stocks do what they do best — go up over time.

Here's the schedule for the Greensboro Grasshoppers, other area teams this week

Lynn Hey/News & Record Many JOBS buttons were displayed by supporters of the proposed package of incentives to bring a Dell factory to the Triad during a session of the legislature in 2004.

Nelson Kepley/News & Record During its few years in the Triad, Dell’s penchant for secrecy, particularly about layoffs, created some controversy. Earlier this year, the Winston-Salem City Council summoned Dell executives to give details of rumored layoffs at its plant on Temple School Road near Kernersville.