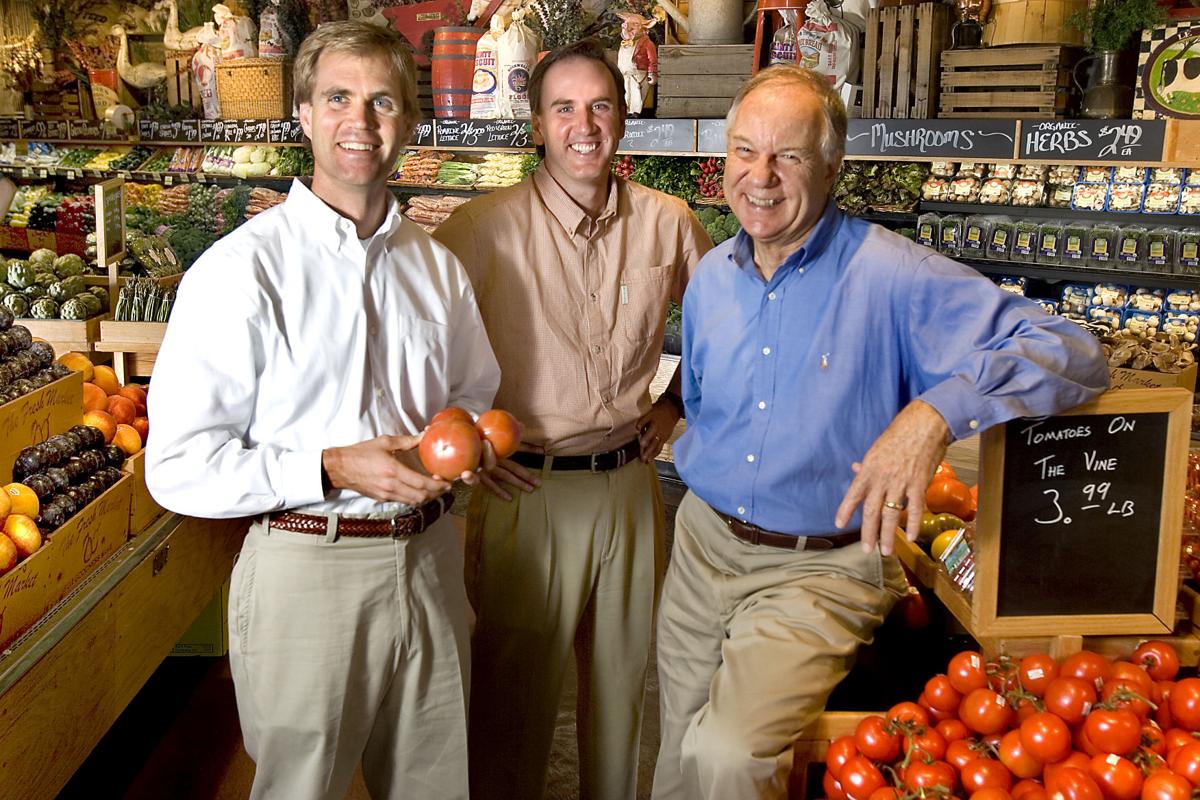 The Fresh Market has always been a family affair. Ray Berry (right) founded the company and will remain as company chairman. His son, Brett Berry (left), and son-in-law Mike Barry will remain vice chairmen of the board. H. Scott Hoffmann News & Record 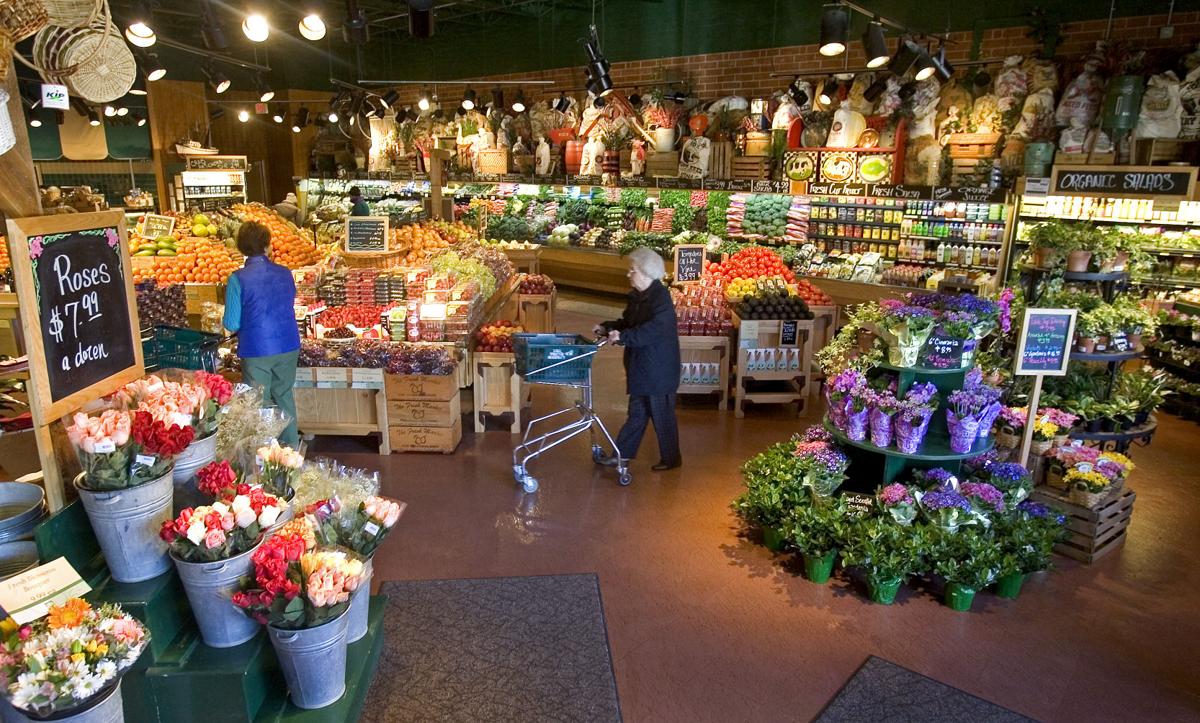 Nelson Kepley/News & Record Customers shop in the produce section of The Fresh Market on Lawndale Drive. The Greensboro-based grocery chain has 95 stores across the eastern United States.

GREENSBORO — For nearly 30 years, The Fresh Market’s owners have run a family company as cozy as their trademark small stores.

That’s about to change, however, when the company sells up to

$345 million worth of public stock on the NASDAQ Stock Market to finance growth.

The Greensboro company filed a registration this week with the Securities and Exchange Commission to go public at an unspecified date to raise the money, with the hope of expanding the 95-store chain to as many as 500 stores.

It’s a major step for the company, giving it new resources and public responsibilities.

“Certainly you could get to 500 if you’re in 19 states and you want to put stores as close together as you can without hurting one another. It is ambitious,” Springer said. “I guess it’s not out of the realm of possibility for them.”

The new federal registration provides a revealing glimpse into what has become a successful grocery company grown from a single store founded in 1982 by Ray and Beverly Berry on Lawndale Drive.

With revenues in 2009 of $861 million, the chain would be ranked near the bottom of Supermarket News’ annual list of the top 75 grocery chains, ranked by revenue.

The company has seen revenues and profits grow nearly every year for the past five years, through the worst days of the recession.

But by selling high-profit perishable items, the company avoids the low-margin goods offered by larger chains.

Ray Berry and other members of the Berry family are the company’s major shareholders, but the offering makes clear that stock will be available to the general public as well.

Ray Berry will remain as chairman of the company. His son, Brett Berry, and son-in-law Mike Barry, will remain vice chairmen of the board.

The registration says the company will continue with Craig Carlock as president and CEO, and Lisa Klinger as executive vice president and chief financial officer.

Questions about the offering were referred to Klinger, but the company did not return calls seeking an interview with her Tuesday.

In 1980, Ray Berry left a job overseeing 3,600 7 Eleven stores for The Southland Co. and moved to Greensboro with the idea of opening an intimate grocery store that sold perishables and put a premium on customer service.

The small, boutique-size store came at a time when customers shopped in supermarkets that sold vegetables wrapped in plastic and offered few options for organic or local produce.

With a simple layout, it’s an easy store to replicate and can fit in many types of locations.

Now that cooks are known as “foodies” and entire philosophies such as “slow food” have sprung up around the food industry, The Fresh Market looks like an idea ready for a national audience.

Although bigger competitors with larger stores, such as Whole Foods, are well-established, Springer of Supermarket News believes the company has a formula that works.

“It’s kind of a clever thing that the mainstream super- markets are now only getting around to,” Springer said.

Astronomers may have discovered the first planet outside of our galaxy

Astronomers may have discovered the first planet outside of our galaxy

How to decide whether to get a debit or credit card

How to decide whether to get a debit or credit card

Here are five predictions from retail experts about Black Friday 2021 — plus, how you can navigate the upcoming sales. Also, check out more of the week's best tips from financial experts.

The state’s labor force data does not distinguish how many workers are full time, temporary or part time, or how many jobs people are working.

28% of Degree Programs Leave Students ‘Financially Worse off’ Than Before College: Report

What a student chooses to major in often matters more than what college they attend.

How to Bank When You Can’t Get to a Bank

Getting to a bank branch can be a challenging task, especially if you have limited transportation options or live far from your bank. In fact, if you live in a…

There’s a Good Chance Your Student Loan Will Soon Have a New Servicer. How to Manage the Transfer

Nearly a third of all borrowers will be affected.

Workers in These 3 States Are Quitting in Droves

The Great Resignation is hitting some states hard.

How to Vet Holiday Deals and Avoid Scams

Supply chain issues, shipping delays and lingering fears from the pandemic have injected a heightened level of stress and scarcity into this year’s holiday shopping season. That could lead some…

Guilford school board votes to have districts mirror those of commissioners

ACC to consider headquarters locations outside of Greensboro

The Fresh Market has always been a family affair. Ray Berry (right) founded the company and will remain as company chairman. His son, Brett Berry (left), and son-in-law Mike Barry will remain vice chairmen of the board. H. Scott Hoffmann News & Record

Nelson Kepley/News & Record Customers shop in the produce section of The Fresh Market on Lawndale Drive. The Greensboro-based grocery chain has 95 stores across the eastern United States.