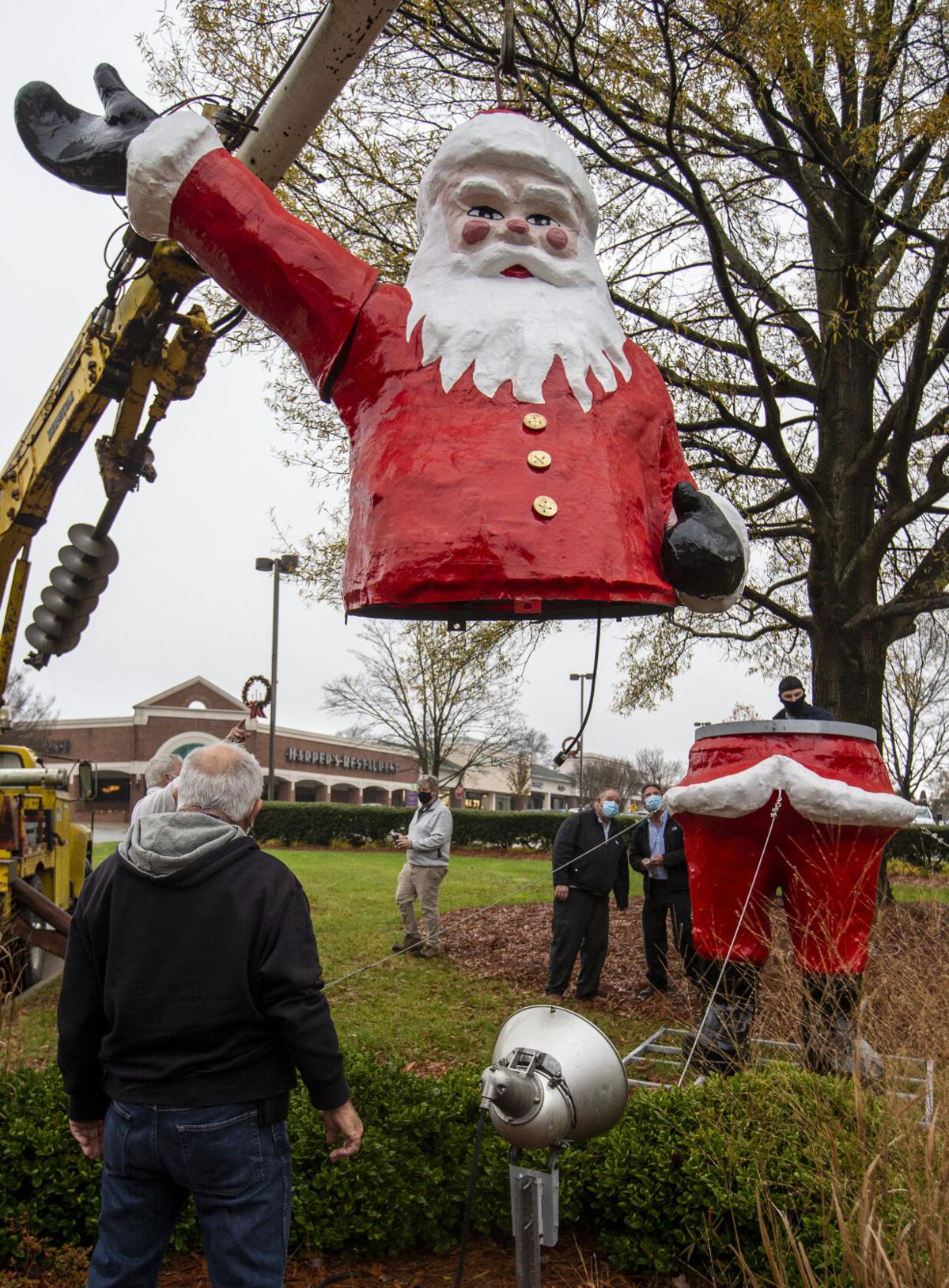 A crew from Friendly Center put the waving Santa Claus in front of the shopping center on Friday. This year, the giant Santa Claus underwent an overhaul during his off months under the skill of local sculptor Jim Gallucci, which should keep him waving for many years to come. 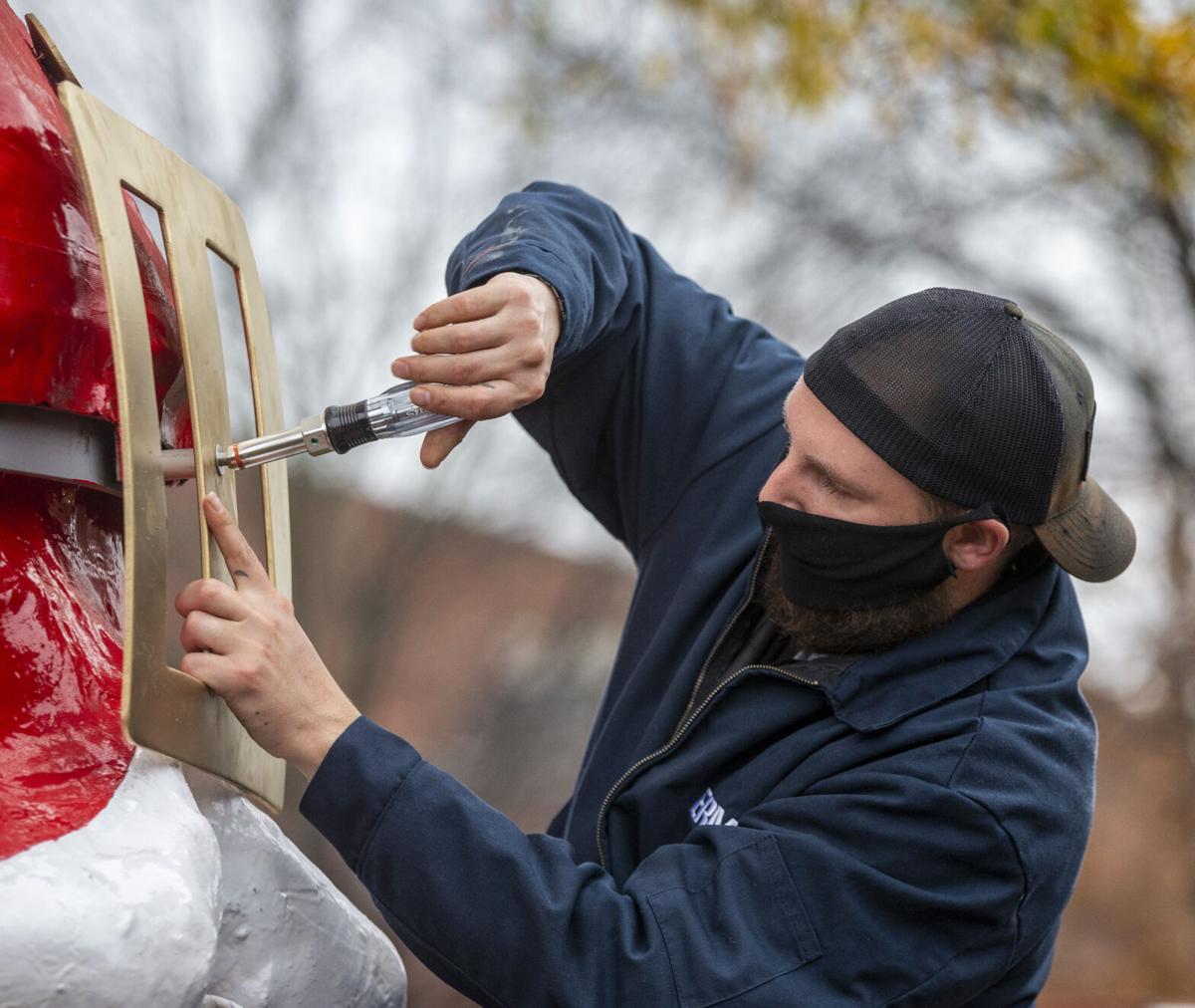 Zach Yeatts bolts the belt buckle on the waving Santa Claus at Friendly Center on Friday. 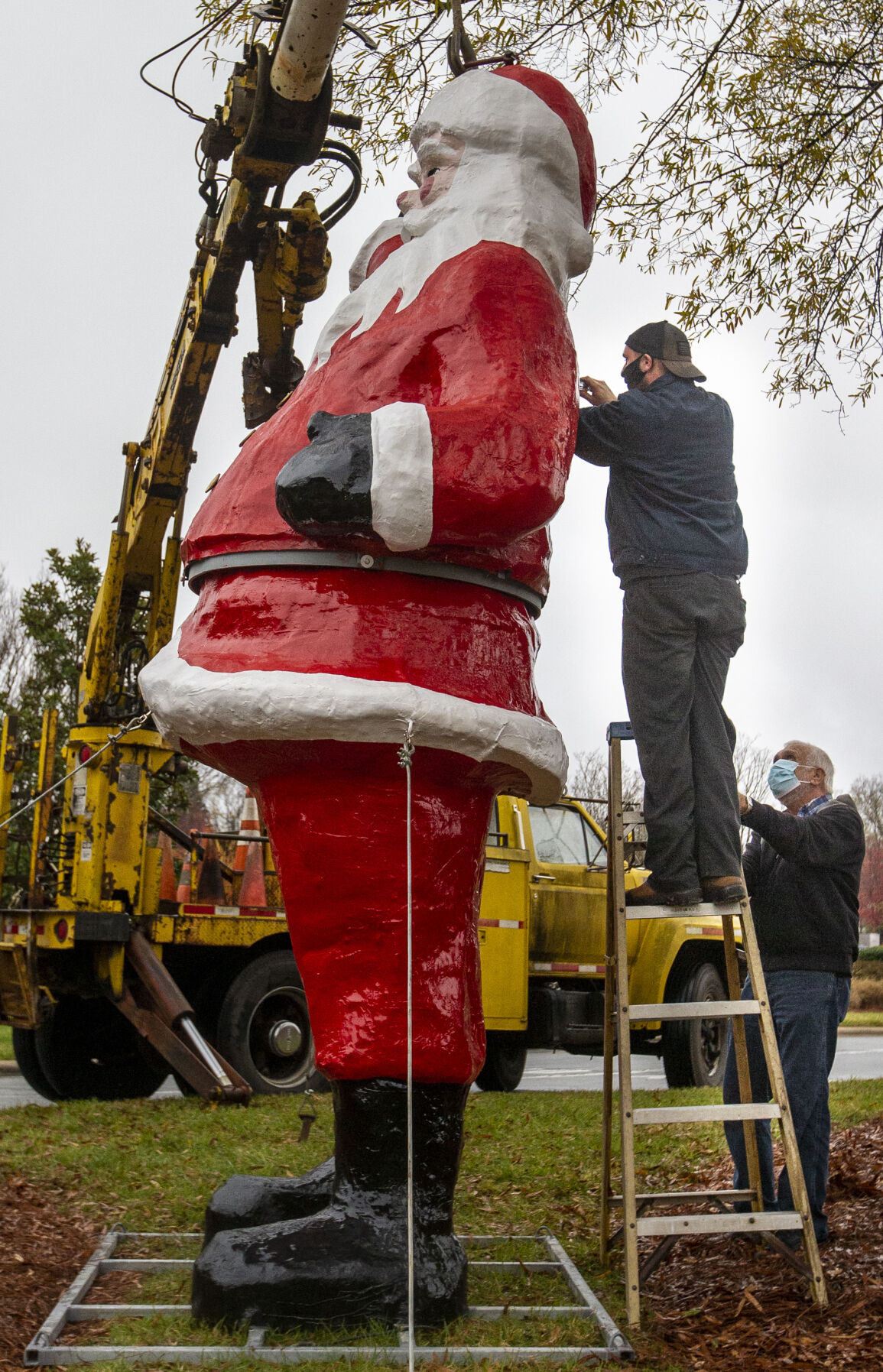 Zach Yeatts puts an access panel back into place as a crew from Friendly Center put the waving Santa Claus in front of the shopping center. Santa Claus has been waving to passersby since 1959. 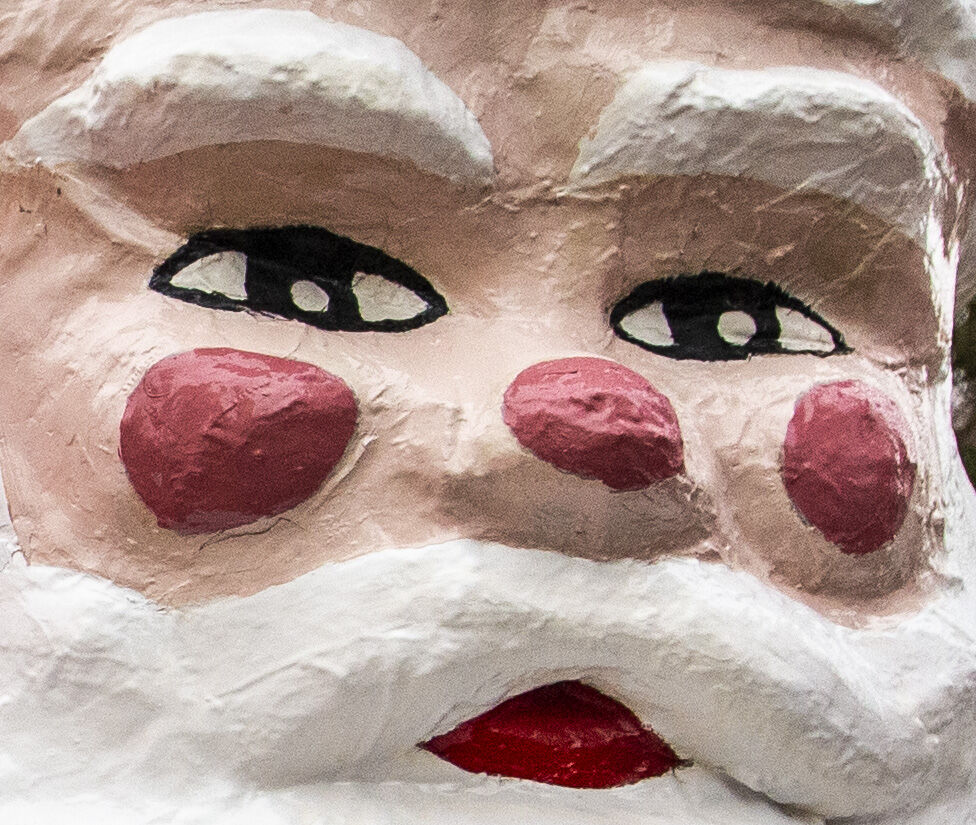 Santa Claus watches as traffic passes by on Friendly Avenue.

GREENSBORO — Shortly before 8 a.m. Friday, a parade of trucks arrives in front of Friendly Center.

The jolly old fiberglass elf rides on a trailer, in two pieces. But within the hour, he will be joined at the waist and waving to passersby on Friendly Avenue with his mechanical arm.

The waving Big Santa has become a holiday icon in the city — much like the more recent lighted tree balls illuminating the Sunset Hills neighborhood.

Billy Wyrick, facilities maintenance director at Friendly Center, has been erecting Santa for 34 of those years.

Wyrick particularly enjoys it in a year when the COVID-19 pandemic has changed life as we know it.

Over the years, Santa has received periodic maintenance to keep him standing and waving.

This year, he underwent an overhaul during his off months under the skill of local sculptor Jim Gallucci.

He replaced the gear box that works with the electric motor to make his right arm wave.

He replaced the metal band around his belly, where Santa's top and bottom are connected by new bolts. A new black rubber belt hides them.

The old plywood belt buckle has been replaced with an aluminum one, painted gold, that will hold up better in winter weather. "It looks exactly like the old one," Wyrick said.

Gallucci fixed Santa's black boots, repaired some of the fiberglass and repainted him.

He also added a new touch: three aluminum gold-colored buttons on the front of Santa's jacket.

Wyrick hoped that fans discover them on their own.

"You know, people don't like change," Wyrick said. "But I think it's a nice change. We like to call it the Jim Gallucci touch."

Berkley Blanks, a retired Greensboro police officer, has volunteered his trailer for transporting Santa for 25 years.

He, too, is impressed with Santa's overhaul.

"From 10 feet away, Santa was beautiful," Blanks said. "But we knew it had cracks and creaks."

"He looks so much better," Blanks said.

Santa's past is a bit of a mystery.

According to a 2002 article by retired News & Record reporter Jim Schlosser, much information died in 1966 with Cap Coffey, the center's legendary publicist in the early years.

Coffey bought Big Santa for $350 used in the late 1950s."From what we know, he came from Philadelphia," Wyrick said. "Supposedly there were two of them."

Coffey introduced him to Greensboro during the 1959 holiday season.

"There's no telling how many kids have seen that, growing up," Blanks said.

Santa suffered a mishap in 1981, when joyriding teens knocked him over with a car.

Area sculptor Ogden Deal made temporary repairs to get him back on his feet to finish the season, then made Santa as good as new after the season.

Several years ago, the 1948 gear box malfunctioned. A replacement couldn't be found. That prevented Santa from waving for two weeks, until a machine shop created a new gear.

Now it has a modern gear box.

"I'm just glad that we have him, that we can put him up every year for people to enjoy," Wyrick said. "A lot of people in Greensboro look at him as being part of the fabric of the community. If he's not out here, they want to know why."

In Friday morning's slight drizzle, Wyrick and his crew brought the Gallucci-improved Santa from his storage facility.

Wyrick went to work with his team of Blanks, Zack Yeatts, Gene Coltrane and Thurman Biggs, who now works for Steve Hall at Shining Light Electric.

Equipment moved Santa from the trailer to his holiday home, between the Friendly Center sign and a willow oak.

The team set Santa's bottom half on a metal frame, then attached his top. They attached plastic-coated cables, secured to the ground with steel spikes.

They attached his top half, covering the bolts with his new belt.

They plugged in an electrical cord, and Santa began to wave.

He will do that 16 times a minute. A timer keeps him waving from 7 a.m. until midnight.

Until the day after Christmas, when Santa returns to storage for another year.

Born: Birthdate unknown, but arrived at Friendly Center in 1959. Came from Philadelphia.

Annual stint: Black Friday to the day after Christmas.

1. Spend $50 at participating locally-owned retailers at Friendly Center between Saturday and Dec. 24.

2. Donate a bag of nonperishable food items from 10 a.m. to noon Dec. 5 in the Regal Greensboro Grande parking lot.

U.S. consumer prices rise by most in nearly 40 years

Side hustles that are perfect for both introverts and extroverts

Side hustles that are perfect for both introverts and extroverts

Why you should expect higher prices on milk, eggs, cheese and meat

Why you should expect higher prices on milk, eggs, cheese and meat

5 steps to strengthen your finances in 2022

In 2022, setting grand financial goals may not be realistic for every budget, but there are still smart steps you can take to shore up your finances.

Microsoft is buying the gaming company Activision Blizzard for $68.7 billion, gaining access to blockbuster games like "Call of Duty" and "Candy Crush."

Don't count on getting your full Social Security checks if you do this.

You could be getting an IRS letter about child tax credit payments too.

Crypto exchanges are where traders can buy, sell, and convert cryptocurrencies. They are necessary for cryptocurrencies to be traded at the scale they are today. Some exchanges offer the most competitive prices or speeds, whereas others provide specialized financial products. Read on to learn about the best cryptocurrency exchanges, how they work, and which one…

After decades of work, Honda quietly delivers the 200th HondaJet from Greensboro factory

The $5 million-plus jet was dreamed up, designed, tested and built on a campus at Piedmont Triad International Airport.

How to Get Free At-Home COVID-19 Tests: Key Details About the Government’s New Plan

What you need to know about ordering free tests, plus eligibility requirements and insurance reimbursement.

Harris Teeter will temporarily shorten most store operating hours from 6 a.m. to 9 p.m. starting Monday, the company said in an email to its loyalty card customers Friday afternoon. Some stores had been open until 10 p.m. or 11 p.m.

To 'stay ahead' of COVID-19, N.C. A&T relies on robust testing program

So much is still uncertain about this weekend's snow except this: It's coming

U. of Michigan reaches $490M settlement over sexual abuse by former sports doctor

A crew from Friendly Center put the waving Santa Claus in front of the shopping center on Friday. This year, the giant Santa Claus underwent an overhaul during his off months under the skill of local sculptor Jim Gallucci, which should keep him waving for many years to come.

Zach Yeatts bolts the belt buckle on the waving Santa Claus at Friendly Center on Friday.

Zach Yeatts puts an access panel back into place as a crew from Friendly Center put the waving Santa Claus in front of the shopping center. Santa Claus has been waving to passersby since 1959.

Santa Claus watches as traffic passes by on Friendly Avenue.