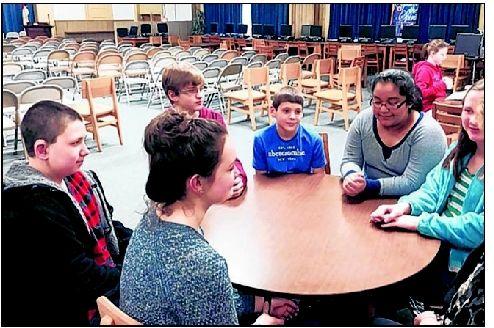 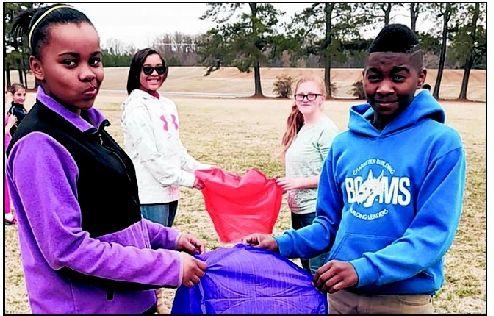 REIDSVILLE — When sixth-grader Cameron Dalton's grades started slipping last year, his family was concerned. But after he transferred to Bethany Community Middle School in the fall, Cameron, 12, is on the A-B Honor Roll and is much happier at his new school, he said.

"The smaller classes really helped me," he said, adding teachers have more time to give students individual attention.

Principal Vicky Bethel said teachers and staff get to know every student on a personal basis.

BCMS came into being in 2000 with an enrollment of 75 students, said Leon Gentry, chairman of the Bethany Community School foundation, who helped organize the group in 1999.

After the four school systems in the county were consolidated in 1993, Bethany students were transferred to Rockingham County High School. Middle school students remained at Bethany. In about 1997, the county Board of Education decided to move the middle school out of the community.

"This is a close-knit community with Bethany School a focal point in the lives in this area," Gentry said.

Residents were alarmed about moving their children to a larger school, especially since it involved a 90-minute bus trip oneway for some students.

J.W. Pearman chaired the effort to start the school.

"It's like starting a new business," Gentry said. "You have nothing to go by."

First they had to find a building. Then they had to hire personnel, develop policies, procedures and curriculum and be approved by the charter school office of the Department of Public Instruction.

RCS agreed to lease the group the old Teacherage and Science buildings on the Bethany School property.

A foundation set up in 2008 helps supplement the capital fund through fundraisers such as concerts and community events.

BCMS has been a huge success with a current enrollment of around 250 sixth-, seventh-and eighth-graders, taught by 15 state-licensed teachers. The staff also includes Bethel, Assistant Principal Winifred Lezine and other support staff.

Each day, two BCMS buses pick up students at a designated location in Eden, two in Reidsville, and one in the western part of the county.

The school has a cafete-

ria, and local restaurants cater lunches at a cost of $3.30 per meal, or the students can bring their lunches. Gentry is proud of the fact the lunch price has not changed in several years.

Enrollment limits vary each year. For the coming school year, BCMS can accept 95 in sixth grade, 92 in seventh and 92 in eighth. The school has had waiting lists in the past and expects to have one for sixth grade this year.

With an average classroom size of about 20, BCMS has the highest composite end-of-grade (EOG) scores in math and reading of all middle schools in Rockingham County.

Seventh-grader Sophie Lewis, 13, said she especially likes the smaller class size, which was one reason her parents enrolled her at BCMS. Another reason for attending BCMS is that her grandmother, long-time educator Elaine McCollum, helped organize BCMS and is a strong supporter.

Sydney Burkett, 14 and an eighth-grader, said her parents also thought the smaller school might be more supportive of Sydney's efforts to enroll at the county school's Early College Program next year.

With the community's high involvement in BCMS, students also participate in community service projects such as Nothing But Nets, Operation Christmas Child, Relay for Life, a Veterans program, Crop Walk, Flight of Honor, County-Wide Food Drive, Give a Kid a Coat, Toys for Tots, Water Day and Pennies for Leukemia.

BCMS donated to the community garden in Mayodan, make and deliver bags to nursing home patients at Christmas with the chorus providing music. This year, as in most years, they had a local and state winner in the DAR essay contest.

Bethany Community Middle School is at 181 Bethany Road at the intersection of N.C. 65 and Bethany Road in Rockingham County's southwest region near the Guilford County line.

Sherri Jackson's killer leaves prison Saturday. Her mother wants to 'remind him of what he's done.'

It was a brutal crime that shocked the city in 2006. Adding to the gruesomeness was killer DeCarlo Bennett leading police to Jackson's body, which was buried in the backyard of a home once owned by his mother.

COVID-19 vaccinations postponed for 10,400 at Cone Health after state says it can't provide the first-dose vaccinations

Naseem Alston was a passenger in a vehicle driven by a Greensboro man that was being pursued by Highway Patrol troopers, a spokesman said.

Jennifer King is an Eden native who grew up in Reidsville, played two sports at and graduated from Guilford College and coached at Greensboro College.

"I am very unhappy that the state appears to keep changing the rules for vaccination allocation,” Terry Akin, Cone Health's outgoing CEO, said in a statement.

'Please don't come early': Guilford officials plea for vaccine recipients to arrive on time, not before

People who arrive 30 to 45 minutes prior to their appointment are slowing down the vaccination process, they said.

Shots in the dark? A COVID-19 vaccine shortage in Guilford has leaders questioning the state's plan.

State officials said Saturday they're in the difficult position of balancing broad distribution with an urgent need to clear their shelves of vaccine or face the threat that the federal government won't supply more doses.

Former students accused Denise Gabriel of inappropriate physical conduct and bullying, according to a story published by a Greensboro publication.

Naseem Alston was a passenger in a vehicle driven by a Greensboro man that was being pursued by Highway Patrol troopers, a spokesman said.