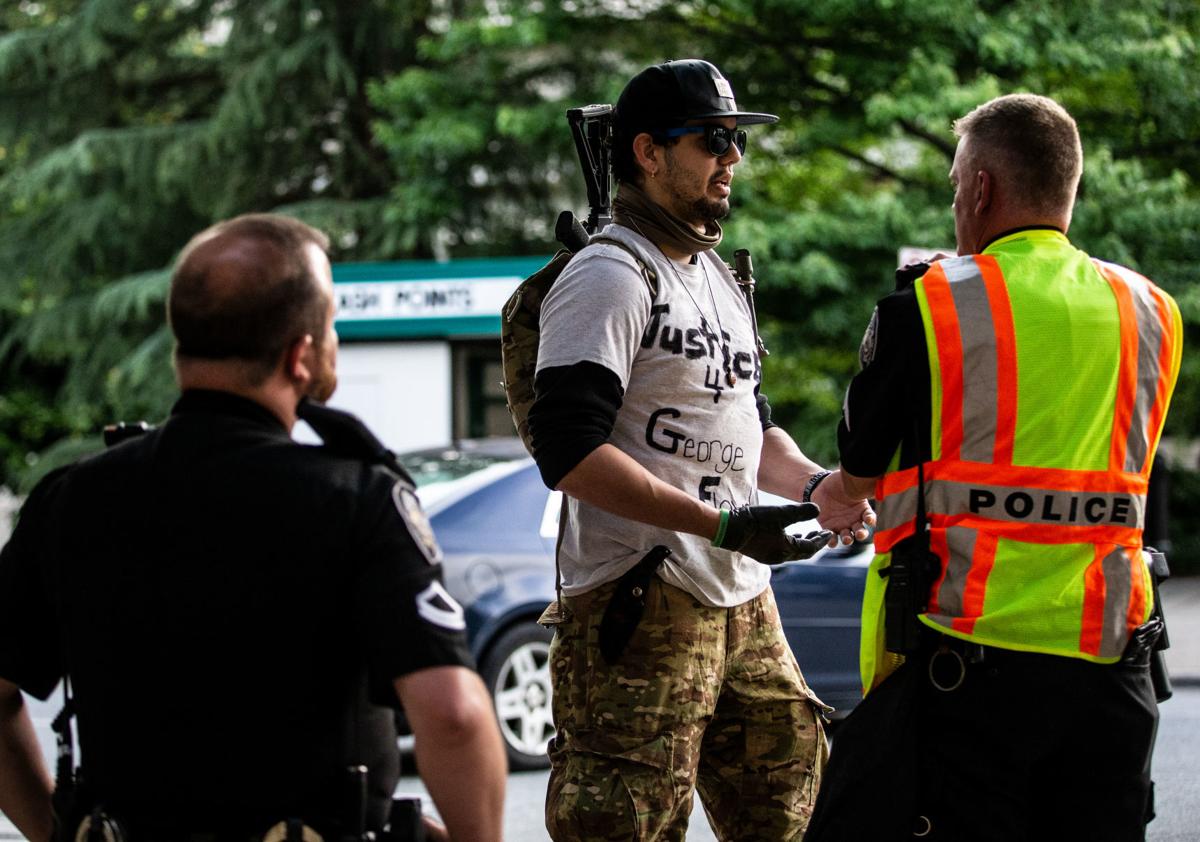 Neil Soto speaks with police about why he brought a rifle to a protest in Greensboro on June 1, 2020. With a single photo, Clearview says its app can identify a suspect in seconds, linking them to public social media profiles and related images with a level of accuracy that far exceeds anything else on the market.

Police officers on bicycles patrol past the International Civil Rights Center and Museum on South Elm Street as the 8 P.M. curfew begins in Greensboro on June 2, 2020.

With a single photo, the company says its app can identify a suspect in seconds, linking them to public social media profiles and related images with a level of accuracy that far exceeds anything else on the market. That algorithmic power comes from data — your data, specifically — since Clearview built its facial recognition algorithm using billions of photos scraped from social media sites contributed by millions of unsuspecting users.

The company’s practices have raised the ire of social media giants and privacy advocates alike. Facebook, Google and other tech firms have demanded Clearview stop hoovering up user images for its ever-evolving algorithm. And groups like the American Civil Liberties Union and the Electronic Frontier Foundation have grown increasingly concerned about the implications of a world where practical anonymity is no longer possible.

That criticism has morphed into lawsuits against the company in several states, as well as broader moratoriums in multiple cities banning the use of facial recognition software by government and, in some cases, private companies.

In North Carolina last year, Raleigh Police Chief Cassandra Deck-Brown banned her officers’ use of Clearview six months into a yearlong contract with the company. The move came weeks after WRAL-Channel 5 raised questions about whether use of the service violated the Raleigh Police Department’s own policies.

Records released by the department show the app ultimately led to charges for at least one suspect: James Mero, who in 2019 was arrested and charged with more than 30 crimes related to fraud and sexual exploitation of a minor. Details of that case made it into the company’s marketing materials.

Until now, there’s been little disclosure from Clearview users — or Clearview itself — on how often the service has identified members of the public.

Even the app’s use locally has been murky. A Raleigh police spokesperson told WRAL last year that “there is no way to accurately gauge or gather” data on how many sworn officers or civilians used the service because the company was at times communicating directly with officers about free trials and demos.

Nationally, BuzzFeed News revealed in February 2020 that paying clients of Clearview included not just law enforcement agencies, but schools, major companies and even the NBA. And following reporting that first revealed the widespread use of Clearview to the general public, The New York Times showed how high-profile users deployed the app at parties, bars and, in one SoHo restaurant, to identify the unknown date of one billionaire’s daughter.

The news organization’s searchable database lists 64 state, county and municipal law enforcement agencies, some of which the records show used the service 1,000 to 5,000 times through February 2020.

But the data comes with plenty of caveats. Hundreds of organizations in the list denied using Clearview altogether, and more than 1,000 didn’t respond to requests for comment. And because of direct communication between the company and officers or free demo offers, some organizations said they were unaware that the app was in use.

Among the top users in the BuzzFeed data in North Carolina were police departments in Raleigh, Fayetteville and Charlotte with a reported 1,001 to 5,000 uses.

A spokesperson with the Charlotte-Mecklenburg police department did not respond to a request for comment Tuesday afternoon.

In Raleigh, police spokesperson Dia Harris said Tuesday afternoon “there is no way to corroborate” the number of searches BuzzFeed attributed to the agency.

In a statement, Fayetteville Police Department spokesperson Sgt. Jeremy Glass confirmed the agency has used the service since a trial starting in December 2019 and became licensed users in September 2020. He said the department follows the company’s usage policies, which among other things require that the facial recognition app only be used for law enforcement purposes.

“Over the course of the almost year and a half that we have been Clearview users, it has been a strong asset in our toolbox, generating numerous leads for investigators by efficiently searching open source records,” Glass said. “From banking fraud investigations to Human Trafficking investigations, the introduction of AI technology greatly reduces the chance of human error during a manual search process of open source records.”

Since December 2019, Glass said the department has run 3,000 searches with Clearview AI, returning about 1,700 matches.

Police departments in Mooresville and Cary, along with alcoholic beverage control agencies in Wake and Mecklenburg counties, were also near the top with 501 to 1,000 uses.

A spokesperson with the city of Mooresville didn’t respond to a request for comment Tuesday afternoon.

Cary Director of Public Safety Allan Cain, however, confirmed in an interview with the N&O that the town police department used a trial of the service for about four months, ending in late February.

“It’s a great technology to use in some applications, but it did not suit our department at the time,” Cain said.

During that trial, Cain said, the department used the app “fewer than 600 times” — an average of four to five times a day.

“I can’t say if that’s a lot or not,” he said, adding that the results were never used to bring any criminal charges.

Some of those uses may have been unauthorized, Cain said, since Clearview regularly offered free trials directly to officers without the knowledge of department leadership.

Use of the software was much more limited in the Triad, according to BuzzFeed’s reporting.

Both Greensboro and Winston-Salem police had 11-50 uses, according to the database.

Greensboro police spokesman Ron Glenn told BuzzFeed the department “does not use, or have plans to purchase Clearview AI software.”

“We do not currently use any facial recognition software,” Glenn said. “We are familiar with the product but at no time considered purchasing the product for use in our department.”

Winston-Salem police did not respond to Buzzfeed’s request for comment.

While High Point police were listed as having a slightly higher use of the software, 51-100 times, Lt. Matt Truitt told BuzzFeed, “We do not and have not had that system.”

Kernersville Police Department was in the lowest tier among Triad agencies, with 1-5 uses reported in the database.

Julia Paul, a spokesperson with the Mecklenburg County ABC Board, confirmed that the organization’s law enforcement arm used Clearview during a free trial, but “opted not to contract nor use the tool after the demo period ended in 2020.” She said the agency did not track the number of times its staff used the app.

“The software was never used to bring charges against any individuals,” Paul said.

Wake County ABC Board law enforcement Chief Kevin Lawrence said the app is still in use by his investigators.

Only 11 North Carolina agencies in BuzzFeed’s list responded to the publication’s request for comment. Several said investigators only used it during a trial or demo period, and others denied using it altogether.

Ann Webb, senior policy counsel for ACLU North Carolina, said BuzzFeed’s reporting highlights the group’s concerns over the lack of regulation around the technology. What’s needed now, she said, are community conversations about the use of facial recognition “before this spirals out of control.”

“Clearview’s facial surveillance technology as used by law enforcement is an extreme invasion of privacy in that it gives the government unprecedented power to track everyday movements,” Webb said.

Clearview AI did not respond to a request for comment on BuzzFeed’s reporting Tuesday afternoon.

In addition to private lawsuits, some state attorney generals have also moved against the company. In Vermont, Attorney General T.J. Donovan sued the company over violations of the state’s consumer protection and data privacy laws. And shortly after The New York Times’ initial report on Clearview in 2020, New Jersey Attorney General Gurbir Grewal ordered police in the state to stop using the service.

“Our office is paying close attention to this but hasn’t taken any formal action at this point,” Laura Brewer, a spokesperson for Stein, said in a statement.

State law in North Carolina does not protect people based on their sexual orientation from discrimination in education, employment, housing, credit or public accommodations, such as service by a business.

After more than 20 years service with the military and police, Abe McMillion knows how important a good cup of coffee can be. So now he's making his own.

'If he can shoot it he will': 911 call describes Pender woman attacked by a rabid bobcat

'Duty to intervene' bill would crack down on N.C. cops using excessive force

Some bills mirror those filed in previous sessions that were never even heard in committee. Others already have bipartisan support and have a better chance of moving forward.

Lionsgate will begin filming in the Charlotte area this month for "Are You There God? It's Me, Margaret," a film based on Judy Blume's beloved best-selling novel.

A same-sex couple, after being told by Highgrove Estate that it did not host same-sex weddings, posted about the venue's response on their Instagram accounts, and received an outpouring of support from friends and community members.

What is a 'vaccine passport' and will you need one in N.C.? Answers to your questions

Here is a primer on the idea, which has already proven to be controversial, of a "vaccine passport," some sort of document that shows a person has been inoculated against the coronavirus.

Neil Soto speaks with police about why he brought a rifle to a protest in Greensboro on June 1, 2020. With a single photo, Clearview says its app can identify a suspect in seconds, linking them to public social media profiles and related images with a level of accuracy that far exceeds anything else on the market.

Police officers on bicycles patrol past the International Civil Rights Center and Museum on South Elm Street as the 8 P.M. curfew begins in Greensboro on June 2, 2020.