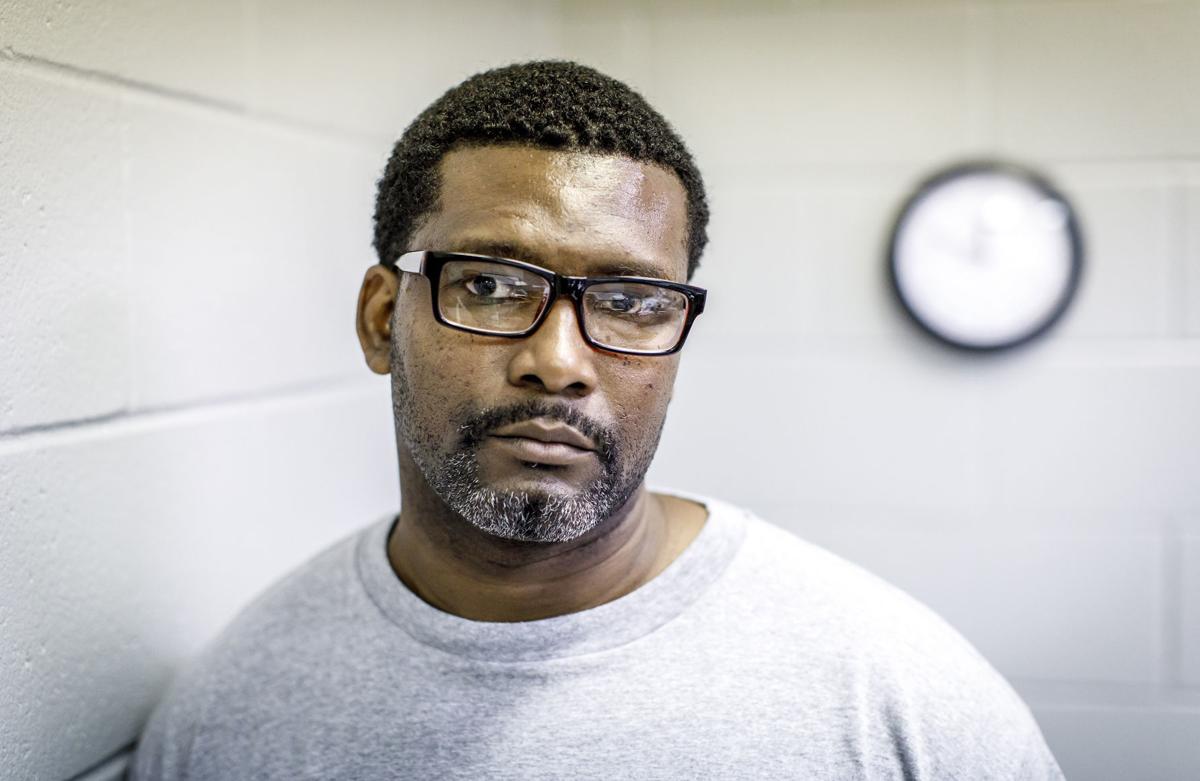 Daniel Green at Lumberton Correctional Institution in 2018 in Lumberton. Green was convicted of murder in the 1993 death of James Jordan. He maintains he was not the shooter.

In this Oct. 5, 1993 photo, Larry Demery, left, and Daniel Green, charged with murdering James Jordan, leave the courthouse in Lumberton after a hearing.

FAYETTEVILLE — In August 1993, the sheriff in Robeson County had his deputies parade Daniel Green and Larry Demery in handcuffs past news cameras at the county courthouse in Lumberton, where they faced murder charges in the death of basketball star Michael Jordan’s father, James Jordan.

A reporter asked Green if he had anything to say to the Jordan family.

A new five-part documentary television series takes a close look at Green’s claim of factual innocence and the evidence that could prove whether he was wrongly convicted in 1996 for the murder of James Jordan. It also discusses the history of racial tension, poverty, political corruption and violence in Robeson County.

“Moment of Truth” debuted Friday on the IMDb TV (free with commercials) and on Amazon Prime Video (which requires a subscription).

“The question is: Was correct justice done?” said Shelly Leslie of Capitol Broadcasting in Raleigh and an executive producer of the series. Capitol Broadcasting, which owns WRAL-Channel 5, made the program with Bow and Arrow Entertainment of Los Angeles.

“What we tried to do in the telling of this story was lay out all the facts, and we did so almost like a trial,” said Matthew Perniciaro of Bow and Arrow Entertainment. He is one of the show’s directors and executive producers.

The prosecution’s case, “anchored by the public narrative that had been reported in the past, and Larry Demery’s testimony at trial, is told first,” Perniciaro said.

“Then the defense is told,” he said. “And that’s Daniel’s story, which is a story that has not been told on a mass scale before.” People will be hearing that side of the story for the first time, he said.

James Jordan disappeared on July 23, 1993. That night someone started using the cell phone installed in his car to make calls to places in and around Robeson County. Jordan’s family did not notify law enforcement because it was common for him to change travel plans without telling anyone. The documentary says Michael Jordan’s security people at some point began to look for him.

A fisherman discovered James Jordan’s body in a swamp in South Carolina on Aug. 3. It had no identification and was in poor condition. Jordan had been shot once in the chest. The medical examiner removed his jaw and hands for use in identifying him, and had his body cremated.

Law enforcement learned on Aug. 5 that Jordan was missing when his car was discovered abandoned, stripped and vandalized near Fayetteville.

The remains of James Jordan were identified on Aug. 12 and Green and Demery were arrested and charged on Aug. 15. Green was 18 and Demery had just turned 18 on Aug. 3. Now they are 46 and 45.

In a plea bargain to get a lesser sentence, Demery pleaded guilty in 1995 and testified against Green at Green’s trial in 1996. Demery is scheduled to be paroled in August 2023.

The program includes audio of Demery — who Green had considered to be his best friend from childhood — telling Green’s jury in 1996 that he and Green discovered a Lexus car with a man sleeping inside parked in the night by the side of a highway south of Lumberton.

They made a plan to rob the man, Demery said, take his car and leave him on the shoulder of a road. But then the man woke up, and Green shot him through the partly open passenger window, Demery testified.

Demery and Green did not know at first it was James Jordan, father of Michael Jordan, Demery said. James Jordan appears to have stopped to rest while driving back to Charlotte from Wilmington, a distance of about 200 miles.

Demery lied on the stand, said Green and his lawyer, Chris Mumma of the nonprofit North Carolina Center on Actual Innocence. Mumma is trying to get the courts to grant Green a new trial.

Green told reporters in 1996 he wanted to testify on his own behalf. But ultimately he did not.

Green’s lawyers instead put on witnesses who said he was with them when Jordan was killed. They did not persuade the jurors of his innocence.

And it didn’t help Green that Green had shot a homemade rap video while wearing the Chicago Bulls championship watch and an NBA All-Star ring that Michael Jordan had given to his father. The judge allowed jurors to see photos from the video, but not the video itself.

Green’s position: He was at a party with friends and family that went into the night. Demery was at the party and tried to talk Green into driving with him that night to smuggle drugs to New York. But Green was making out with a girl he liked at the party, and he didn’t want to go.

Green and others at the house said Demery left, then came back about 4:30 a.m., and Demery asked Green to leave with him. Green’s mother said in an interview she asked him where he was going, and he told her he was going to help Demery change a flat tire.

Demery brought Green to a red Lexus parked by a store, Green said, and then to a man’s body lying on the ground. Green helped Demery put the body in the trunk of the Lexus, he said, and they drove it to a bridge over a creek in South Carolina and dumped the body.

And then he and Demery took property from the car. They later got rid of the Lexus and it ended up found in Cumberland County, near Fayetteville, stripped and vandalized.

“He was trying to convince me he was — it was a guy that he met, a guy that was selling drugs, that was in ‘the game,’” Green said in an interview in the fourth episode. “The game” is the illegal drug trade.

Green acknowledges his culpability for helping Demery dispose of Jordan’s body and for having his stolen property. If that’s all he is guilty of, he has served his time for those crimes.

The producers did not interview Michael Jordan for this project. He declined their request, they said. They have archival footage of him from other interviews and appearances, including a 1993 sit-down with Oprah Winfrey where he talks about the loss of his father.

Without commercials, the episodes run from 26 minutes to 52 1/2 minutes.

Beyond the murder and Green’s trial, “Moment of Truth” looks at other topics surrounding the case, including:

Allegations that Demery was connected to the sheriff’s son, who later was convicted for drug dealing. The son says he never knew Demery.

The history of racial tensions among the American Indians, Blacks and whites in Robeson County. American Indians are the county’s largest ethnic or racial group. Demery is Lumbee Indian, Green is Black.

The suspicious deaths of people in the county in the 1980s. These include the shooting death of an American Indian who was killed when he was a candidate for Superior Court judge in 1988, followed by the death — which the sheriff said was suicide — of the man who allegedly killed the judicial candidate.

In the past several years, Green and Mumma asked a judge to grant a hearing to consider whether Green should get a new trial. The judge rejected this request, and Mumma has said she is appealing the decision.

Leslie and Perniciaro said they weren’t trying in the documentary to prove Green is factually innocent.

“Our goal is not to pass judgment one way or the other. As documentary filmmakers and journalists, our goal is to lay all the facts and let audiences come to the determination of where those facts lead them,” Perniciaro said.

“There is enough question of fact — both with what occurred in the original trial and in a lot of the evidence that has come out since — that it is our belief that the courts need to look at this, and that Daniel does deserve a new hearing,” he said.

State law in North Carolina does not protect people based on their sexual orientation from discrimination in education, employment, housing, credit or public accommodations, such as service by a business.

After more than 20 years service with the military and police, Abe McMillion knows how important a good cup of coffee can be. So now he's making his own.

'If he can shoot it he will': 911 call describes Pender woman attacked by a rabid bobcat

'Duty to intervene' bill would crack down on N.C. cops using excessive force

Some bills mirror those filed in previous sessions that were never even heard in committee. Others already have bipartisan support and have a better chance of moving forward.

Lionsgate will begin filming in the Charlotte area this month for "Are You There God? It's Me, Margaret," a film based on Judy Blume's beloved best-selling novel.

A same-sex couple, after being told by Highgrove Estate that it did not host same-sex weddings, posted about the venue's response on their Instagram accounts, and received an outpouring of support from friends and community members.

What is a 'vaccine passport' and will you need one in N.C.? Answers to your questions

Here is a primer on the idea, which has already proven to be controversial, of a "vaccine passport," some sort of document that shows a person has been inoculated against the coronavirus.

Daniel Green at Lumberton Correctional Institution in 2018 in Lumberton. Green was convicted of murder in the 1993 death of James Jordan. He maintains he was not the shooter.

In this Oct. 5, 1993 photo, Larry Demery, left, and Daniel Green, charged with murdering James Jordan, leave the courthouse in Lumberton after a hearing.