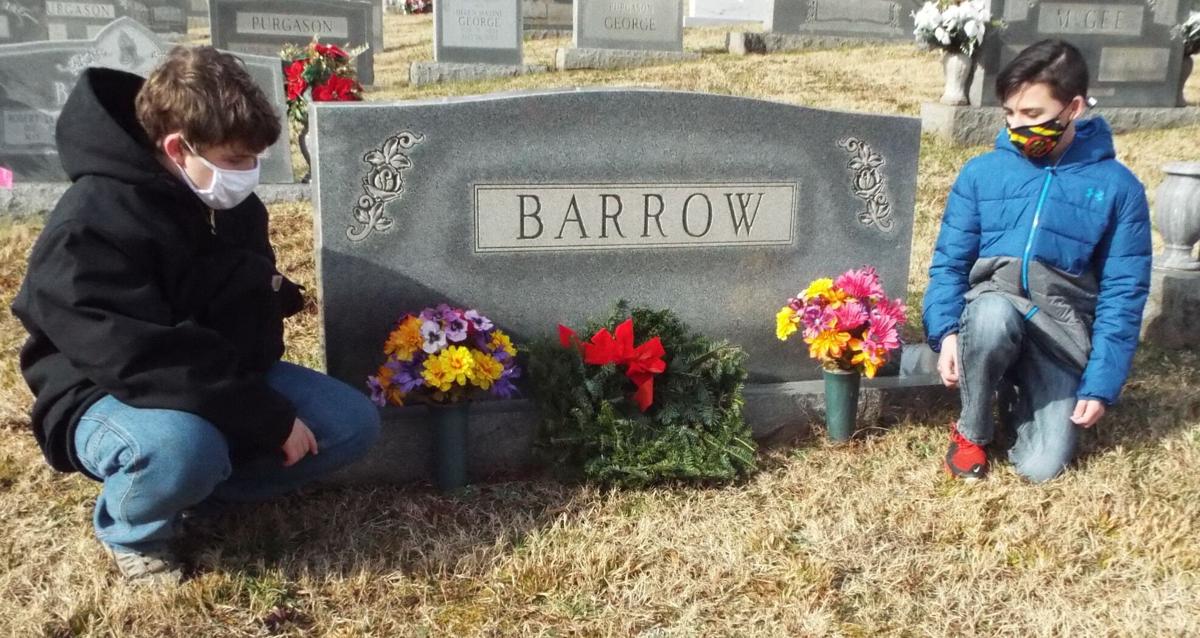 Special recognition is given to the grave of Billy Barrow by Boy Scouts Zackary Lawson, left, and Nathanial Lawson. The boys said Barrow was instrumental in organizing the first Boy Scout troop in the area and was a longtime supporter of the organization.

Karen Vernon, in red, leads the Pledge of Allegiance during the ceremony. Regent Kim Thompson is at left. 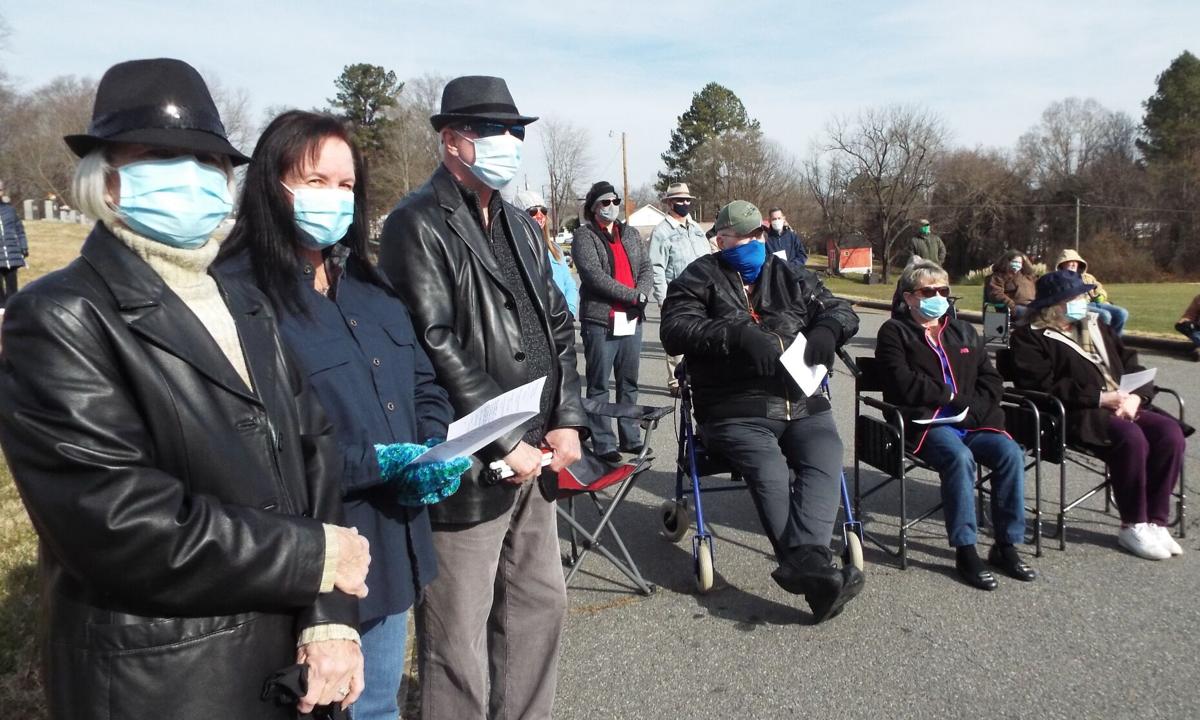 Safety measures were practiced as the crowd listened to those speaking. Although this year’s crowd was limited, DAR members hope the ceremony on Dec. 18, 2021 will be open to everyone. 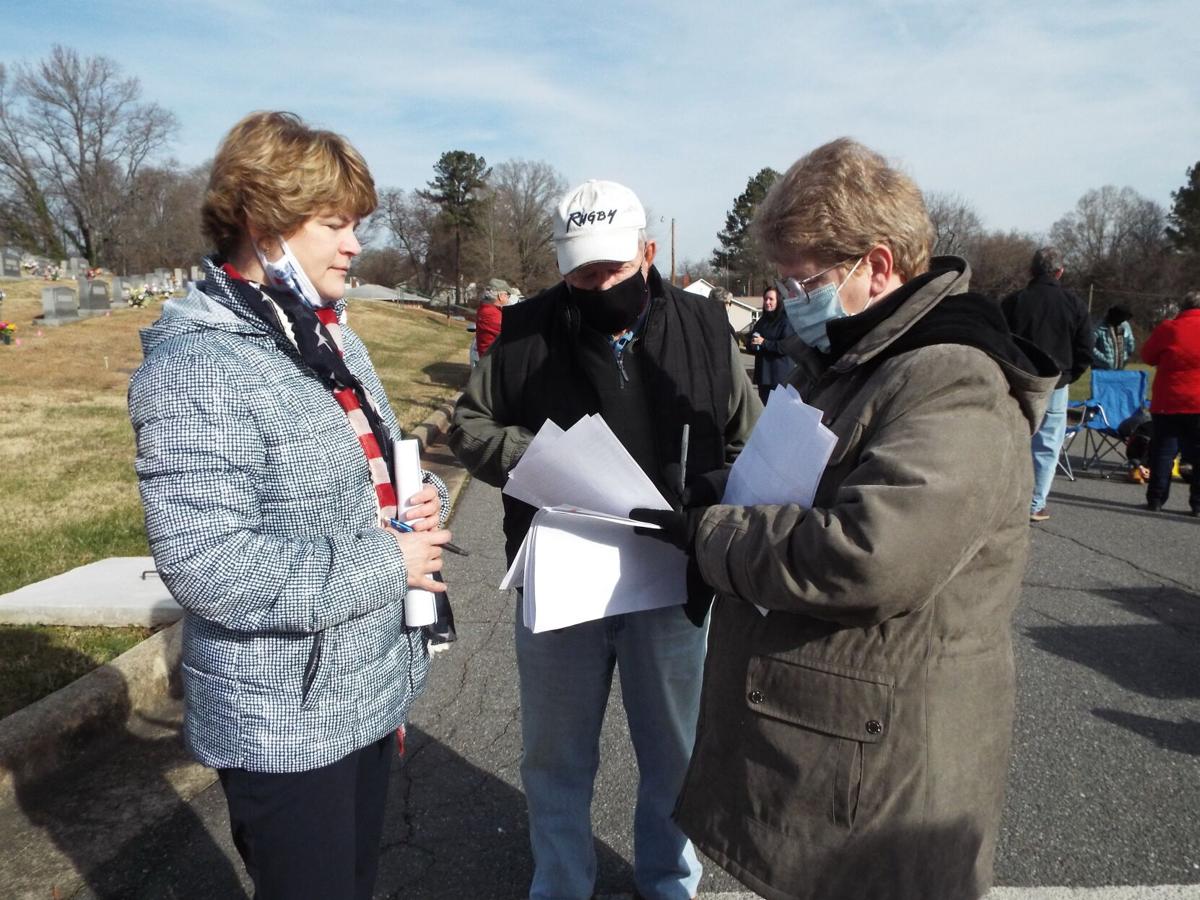 Mike Martin checks the graves where he will place wreaths with NCDARV Regent Kim Thompson, left, and immediate past Regent Janelle Johnson, who spearheaded the program. 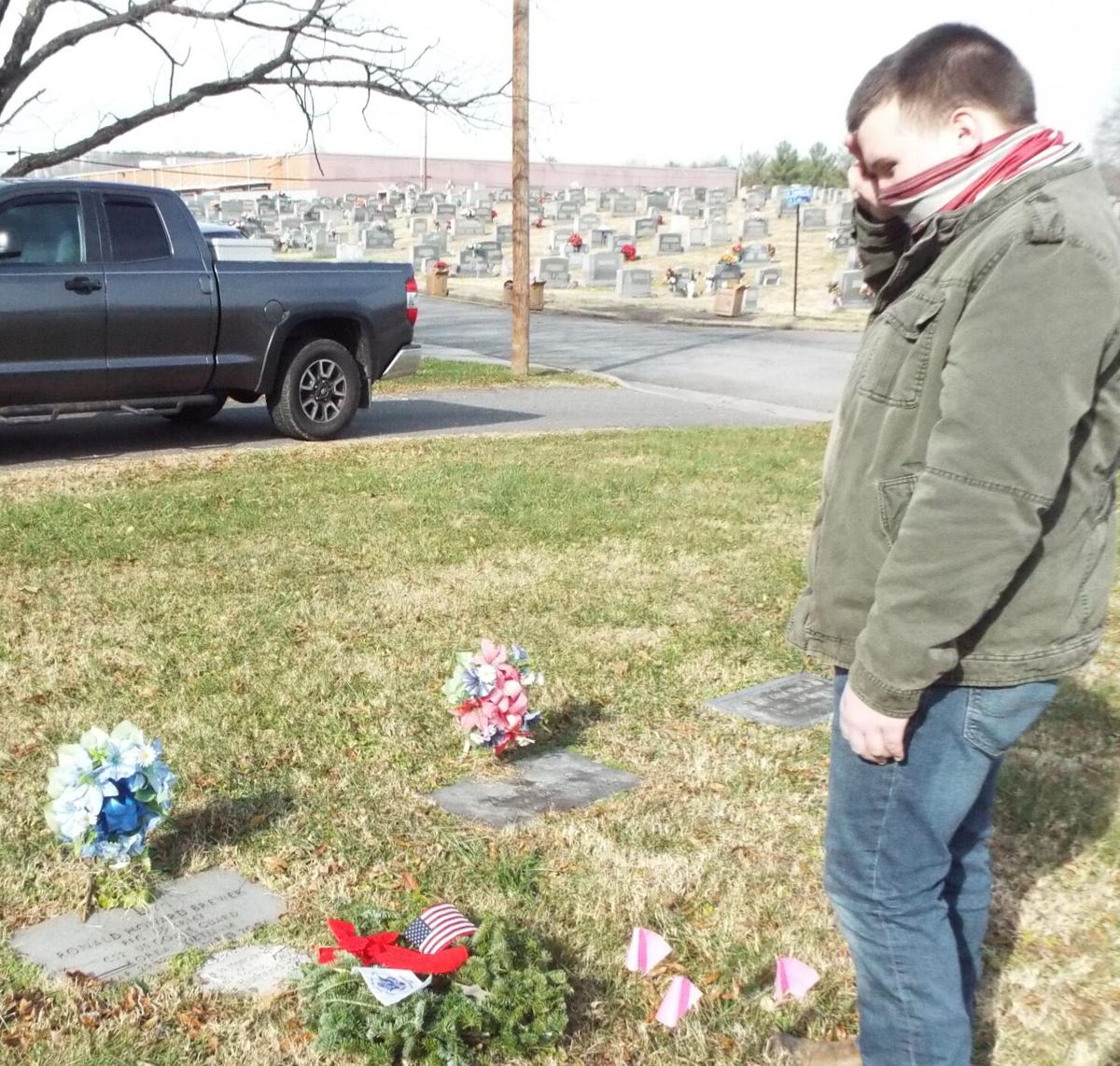 Boy Scout Trentyn Murphy salutes after placing a wreath on the grave of Coast Guard Pfc. Ronald Howard Brewer, who served in Korea and Vietnam. 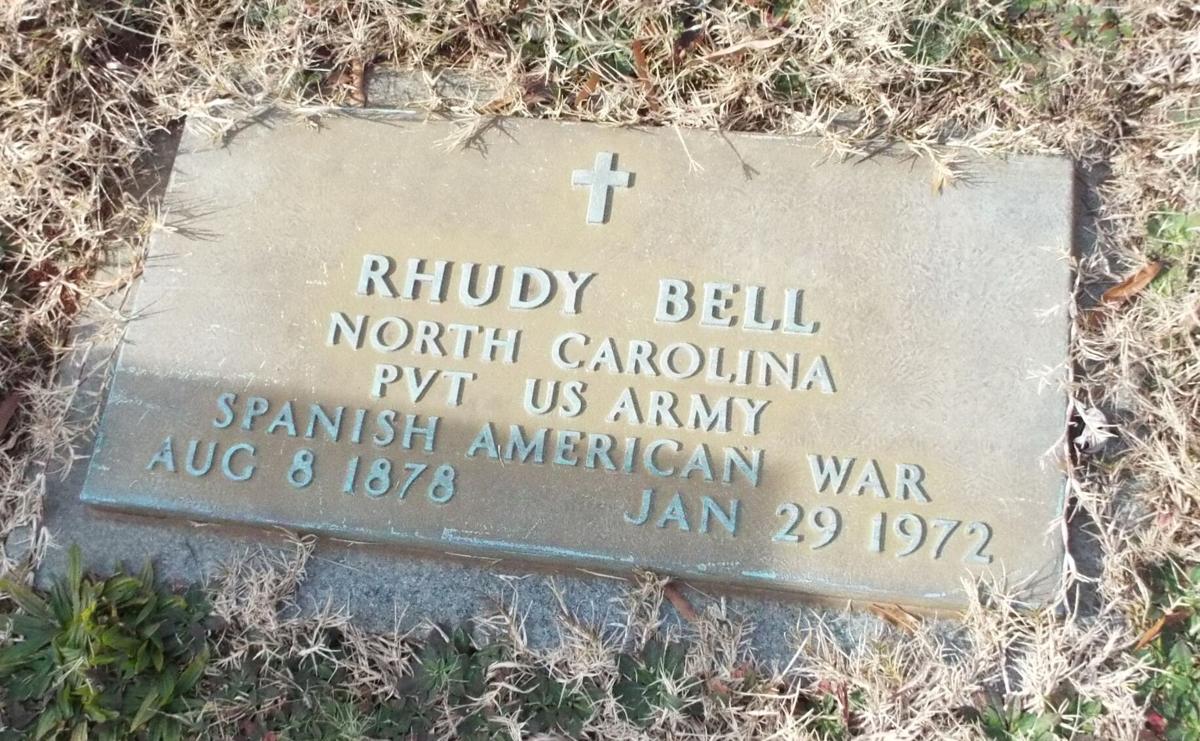 Rhudy Bell is the oldest veteran buried in the cemetery. Bell served in the Spanish American War. Born in August 1878, he died Jan. 29, 1972. 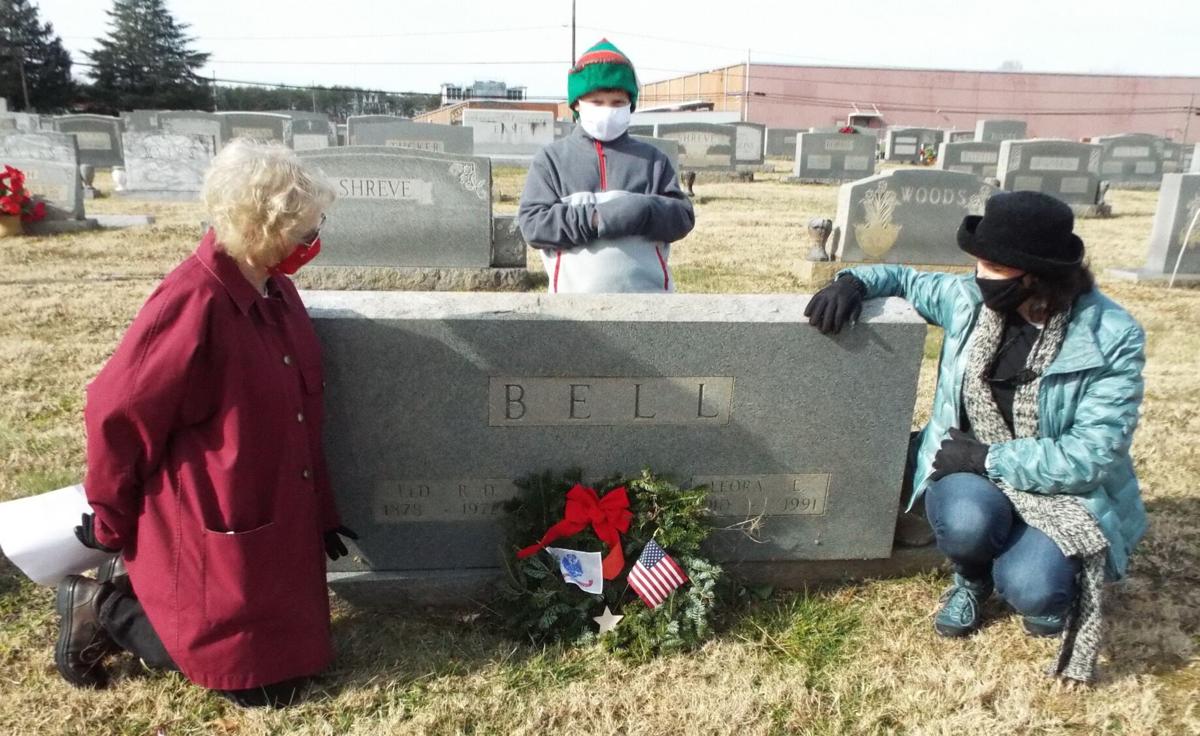 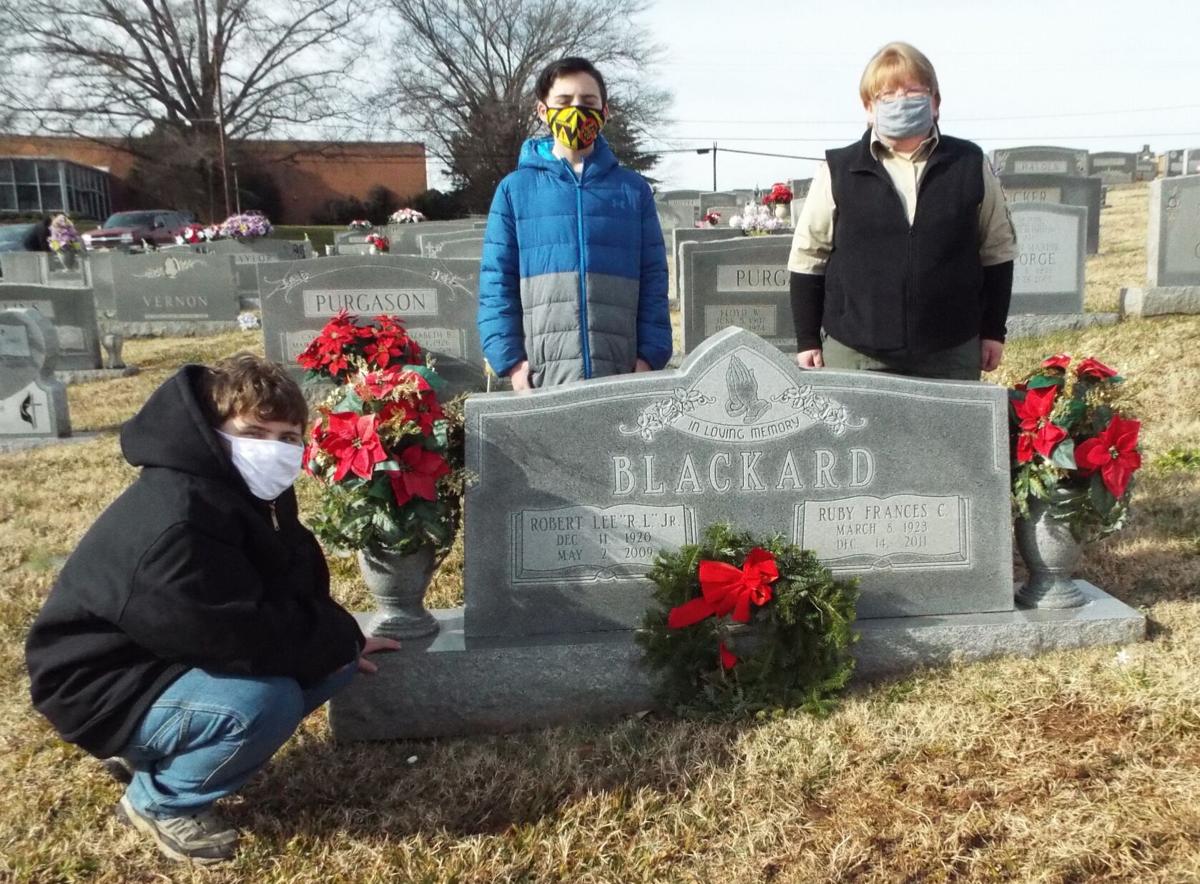 MAYODAN – Despite cold temperatures and pandemic precautions, about 100 people recently gathered at the Mayodan Municipal Cemetery to participate in the national Wreaths Across America program.

Late last fall when James Hunter Chapter National Society Daughter of American Revolution (NSDAR) members became aware of the opportunity to become involved in the program, it was too late to participate in 2019.

However, they began working on the logistics involved in such an undertaking for Christmas 2020, said former Regent Janice Tate. Immediate past Regent Janelle Johnson spearheaded the efforts and organized the volunteers to place the wreaths on the graves.

“Her records helped with our outreach to family and friends of veterans buried in the cemeteries,” Tate said.

During the past several months, chapter members contacted family, friends, businesses and others in the community to seek sponsorships of wreaths to place on the gravesites.

Usually, residents from outside the DAR also would be involved but because of pandemic safety precautions, the local chapter limited the laying of the wreaths ceremony Dec. 19 to chapter members and their families.

On a Saturday in November, several members cleaned the cemetery in preparation for the ceremony, then marked the graves where the wreaths would be placed, Tate said.

“The entire community, young and old, have come together to honor our deceased veterans,” said Regent Kim Thompson in her opening remarks. “We thank those of you who volunteered to place the wreaths, those attending this ceremony to honor our veterans and those who sponsored the wreaths for our veteran graves."

She mentioned similar efforts across America.

“The freedoms we enjoy today have not come without a price," Thompson said. "Lying here before us and in cemeteries throughout this nation are men and women who served this nation so that we can live in freedom and without fear.”

Thompson thanked “those who gave their lives to keep us free and we shall not forget you. We shall remember.”

Tate said 346 veterans were buried in the Mayodan cemetery; the DAR honored 277 with sponsored wreaths. As the names were read, members of Boy Scout Troop 562 placed wreaths on several of the graves and saluted at each grave to honor the veterans.

Tate then read a brief history of each representative veteran and a wreath was placed on that grave.

Ronald Howard Brewer was born in Rockingham County on March 29, 1936, and he died Sept. 13, 2006. He was a private first class in the Army and a Petty Officer 2nd Class in the Coast Guard during the Korean and Vietnam Wars.

Arthur Sylvester Case was a veteran of the Air Force and Army, and was a lifetime member of the American Legion. He died Feb. 22, 2020.

Lewis Jefferson Ore rose to the rank of sergeant in the Marine Corps during the Korean War. He died Sept. 26, 2005.

Pfc.Thomas Dwain Griffin enlisted in the Army and was a tank driver in the 11th Armored Calvary He was 20 and engaged to be married when he was killed in Cambodia on June 20, 1970.

Johnie Lamon Simpson served in the Army medical corps in Europe during World War II. He and other members of his unit were captured and imprisoned in a POW camp in Germany for six months. They were released when the Allies defeated the Germans. He died Sept. 28, 1995. Army MSgt. (Ret.) Skip Davison laid the wreath honoring the 93,129 U. S. servicemen from all branches of the service who were either POWs or missing in action. These individuals have never returned to their families and homes.

“Today we show a united front on national unity all across the United States of America as we remember the fallen, honor those who serve and teach our children the value of freedom,” Tate concluded.

The wreaths represent “our commitment as a United America to remember the fallen,” said Thompson, noting the wreaths honor those who served and are serving in the Armed Forces and “their families who endure sacrifices every day on our behalf.

“We are not here today to decorate graves,” she said. “We are here to remember not their deaths, but their lives. Each wreath is a gift of appreciation from a grateful America.”

In 1992, when Worcester Wreath had a surplus of wreaths nearing the end of the holiday season, owner Morrill Worcester remembered a boyhood experience at Arlington National Cemetery. Realizing he had an opportunity to honor our country’s veterans, he arranged for the extra wreaths to be placed an older sections of the cemetery.

Volunteers from the local American Legion and VFW Posts gathered with members of the community to decorate each wreath with traditional red, hand-tied bows.The first wreath-laying included a special ceremony at the Tomb of the Unknown Soldier.

The annual tribute continued quietly until 2005, when a photo of the stones at Arlington, adorned with wreaths and covered in snow, circulated on the internet. Suddenly, the project received national attention. Thousands of requests poured in from all over the country from people wanting to help with Arlington or to emulate the Arlington project at their national and state cemeteries, or to simply share their stories and thank Worcester for honoring our nation’s heroes.

In 2008, after more than 100,000 wreaths were placed in over 300 locations in every state, Puerto Rico and 24 overseas cemeteries, Congress declared Dec. 13 as “Wreaths Across America Day.”

WAA is committed to teaching younger generations the value of their freedoms and the importance of honoring those who sacrificed so much to protect those freedoms. The organization offers learning tools, interactive media projects and opportunities for youth groups to participate in the events.

Wreaths Across America would not be successful without the help of volunteers, active organizations and the generosity of the trucking industry, which offers invaluable support to WAA's mission to remember the men and women who served our country, honor our military and their families, and teach our children about our freedom and those who protect it.

Emergency workers rescued four people Thursday who said they had traveled the Dan River as a group of nine on Wednesday. The four who were rescued, who were not wearing life jackets, were being treated at a local hospital Thursday night for injuries not considered life-threatening, authorities said.

Four family members have died and a fifth is missing in the accident, which is being called the worst recreational disaster in the county.

Search ended for 2 still missing after tubing accident on Dan River. 'This operation has transitioned to a recovery effort.'

“We feel confident that we have exhausted all efforts to rescue, or recover, the two remaining victims," Rodney Cates, director of Emergency Services for Rockingham County, said in a news release. "Our thoughts and prayers continue to go out to the victims and families of this tragic incident."

"The hydraulics is what gets people,'' said Glenn Bozorth, who owned and operated Dan River Adventures in Stoneville for 25 years. "When the water goes over the dam, it creates a circular motion that pulls you under."

Brooks gets the nod as the new Rockingham boys basketball coach

Adrian Martinca, founder and chairman of the nonprofit Technology for the Future, said he and his younger sister have been working with a Winston-Salem-based immigration attorney to try to halt their deportation.

Upon sale of the property, the newspaper staff will move to another location and news/business operations will continue without interruption.

Special recognition is given to the grave of Billy Barrow by Boy Scouts Zackary Lawson, left, and Nathanial Lawson. The boys said Barrow was instrumental in organizing the first Boy Scout troop in the area and was a longtime supporter of the organization.

Karen Vernon, in red, leads the Pledge of Allegiance during the ceremony. Regent Kim Thompson is at left.

Safety measures were practiced as the crowd listened to those speaking. Although this year’s crowd was limited, DAR members hope the ceremony on Dec. 18, 2021 will be open to everyone.

Mike Martin checks the graves where he will place wreaths with NCDARV Regent Kim Thompson, left, and immediate past Regent Janelle Johnson, who spearheaded the program.

Boy Scout Trentyn Murphy salutes after placing a wreath on the grave of Coast Guard Pfc. Ronald Howard Brewer, who served in Korea and Vietnam.

Rhudy Bell is the oldest veteran buried in the cemetery. Bell served in the Spanish American War. Born in August 1878, he died Jan. 29, 1972.