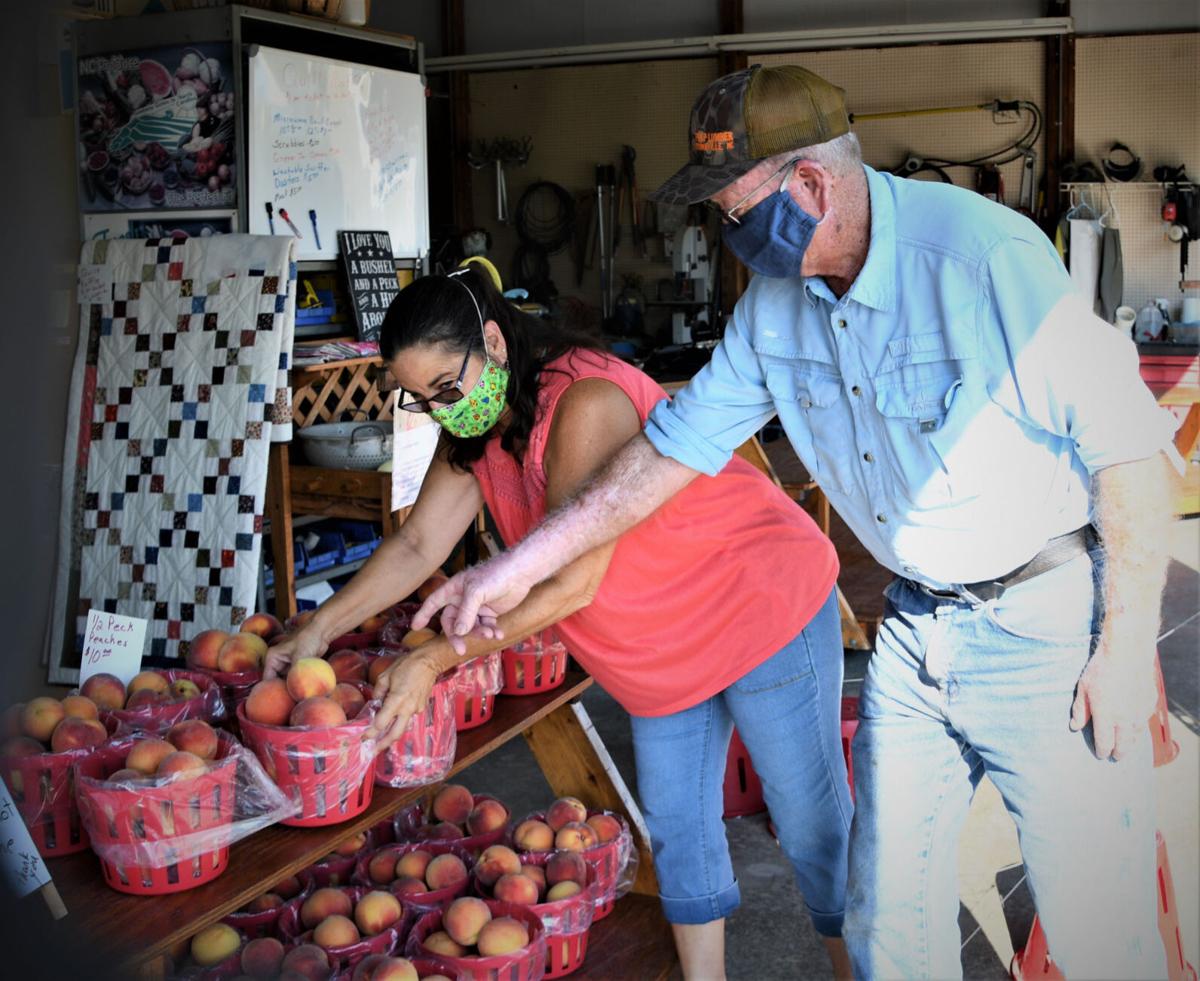 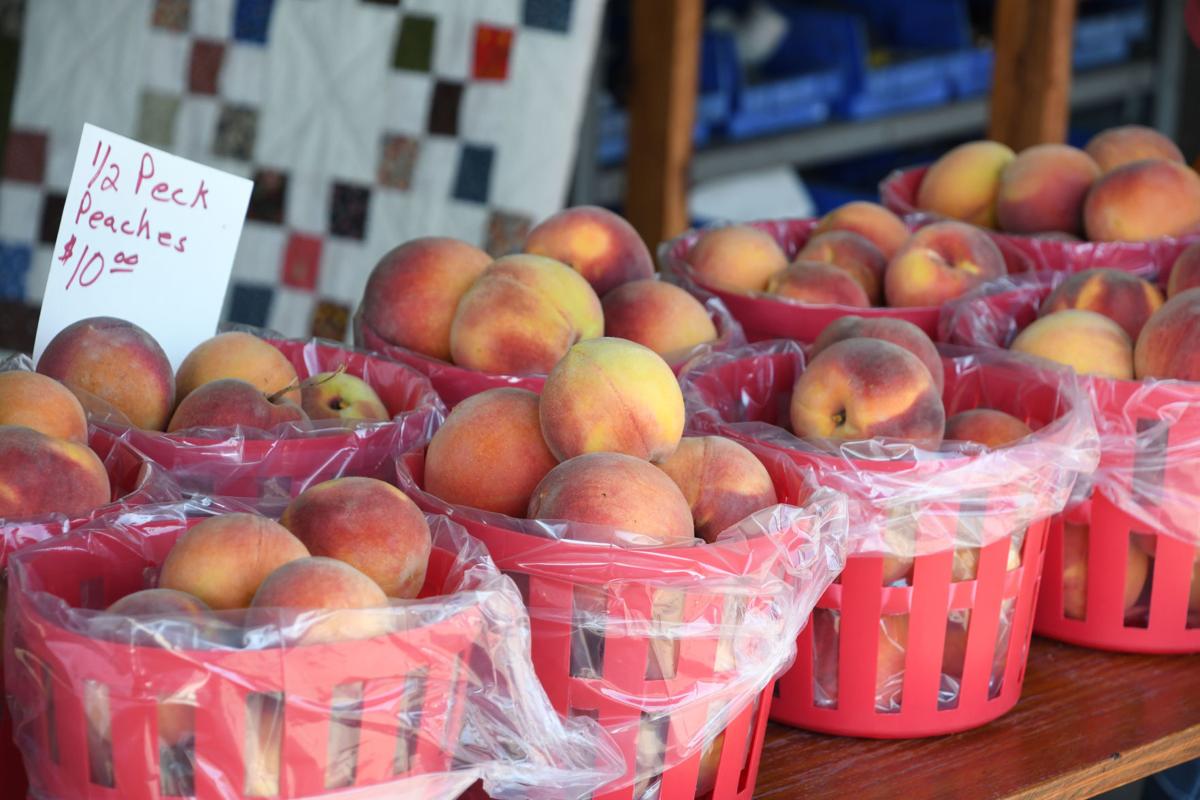 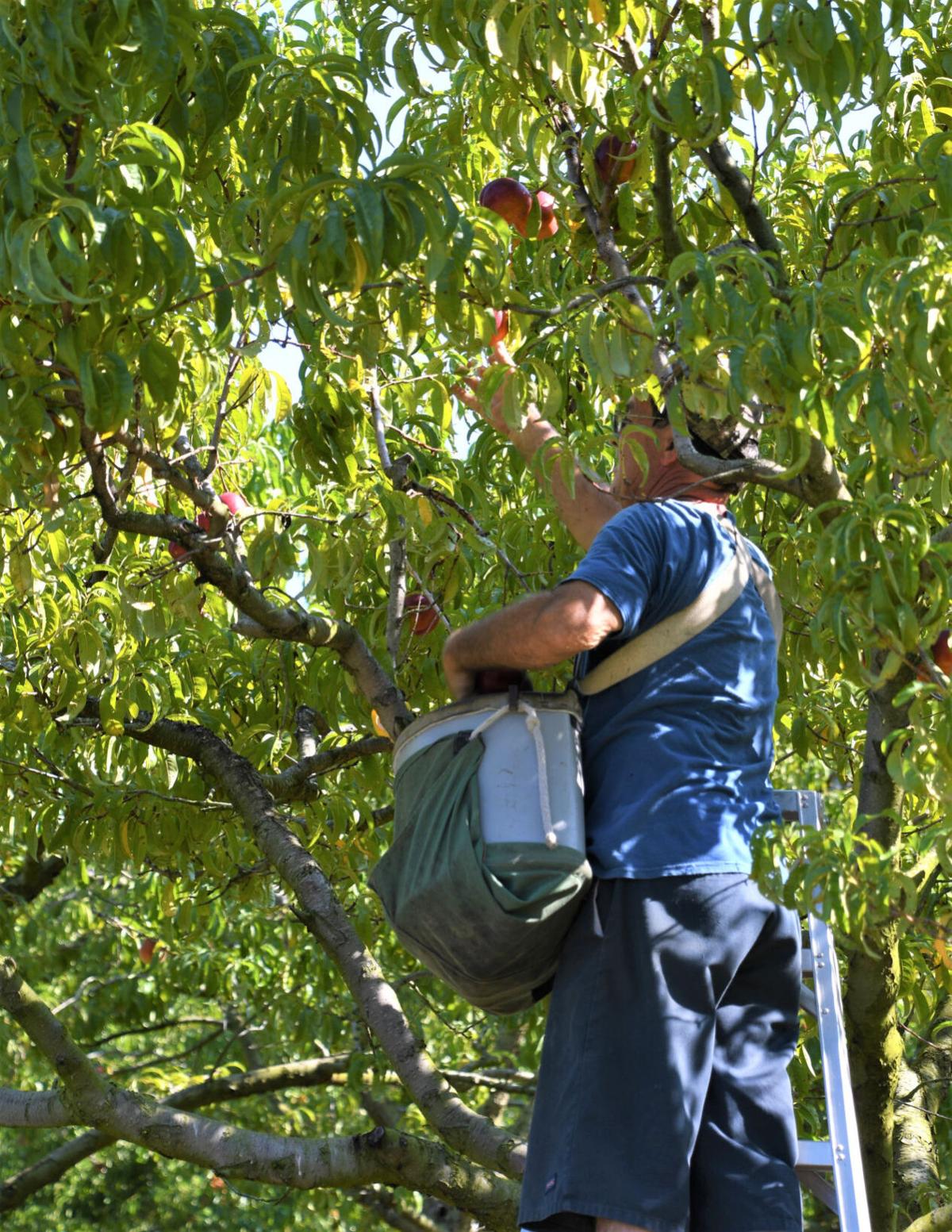 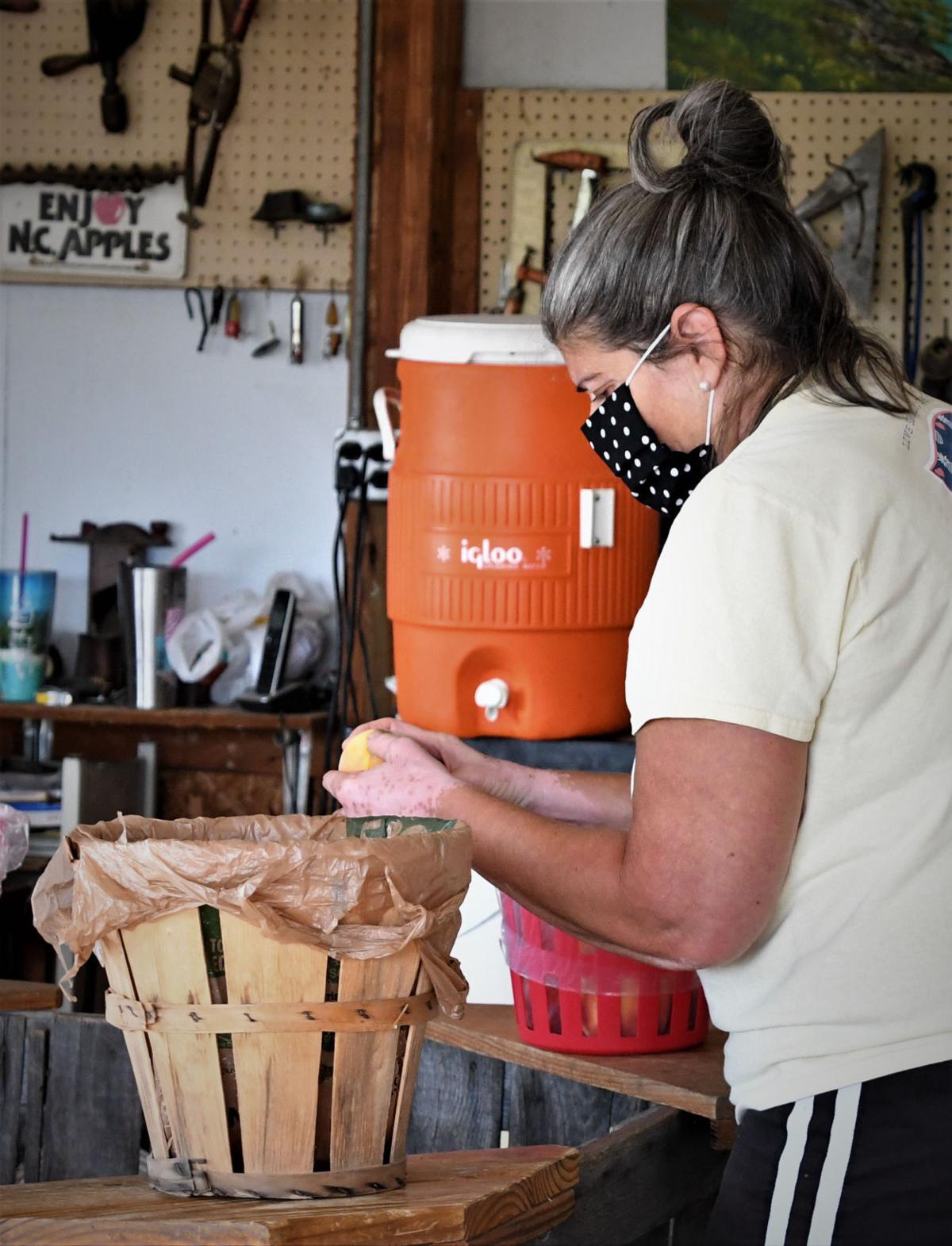 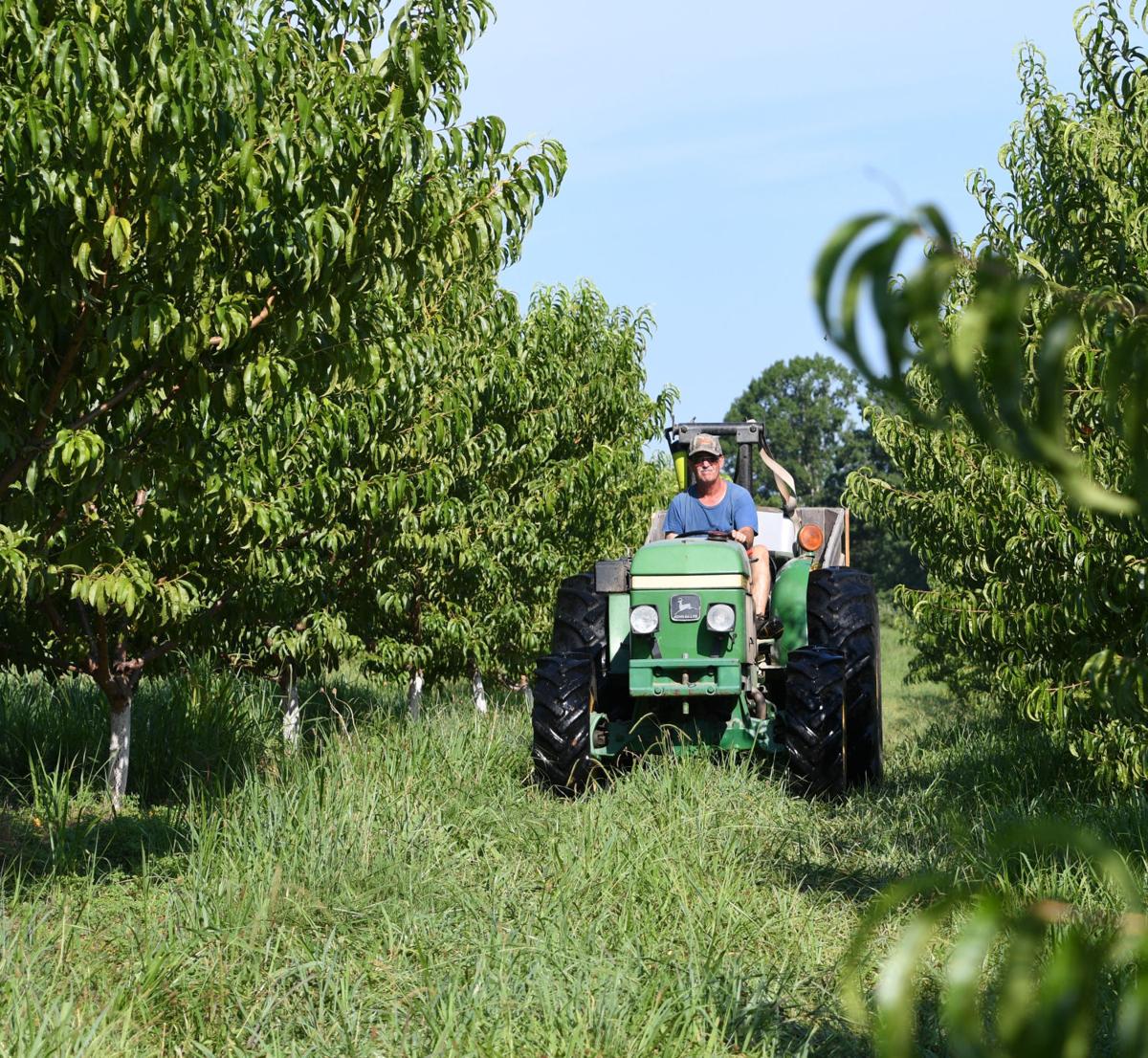 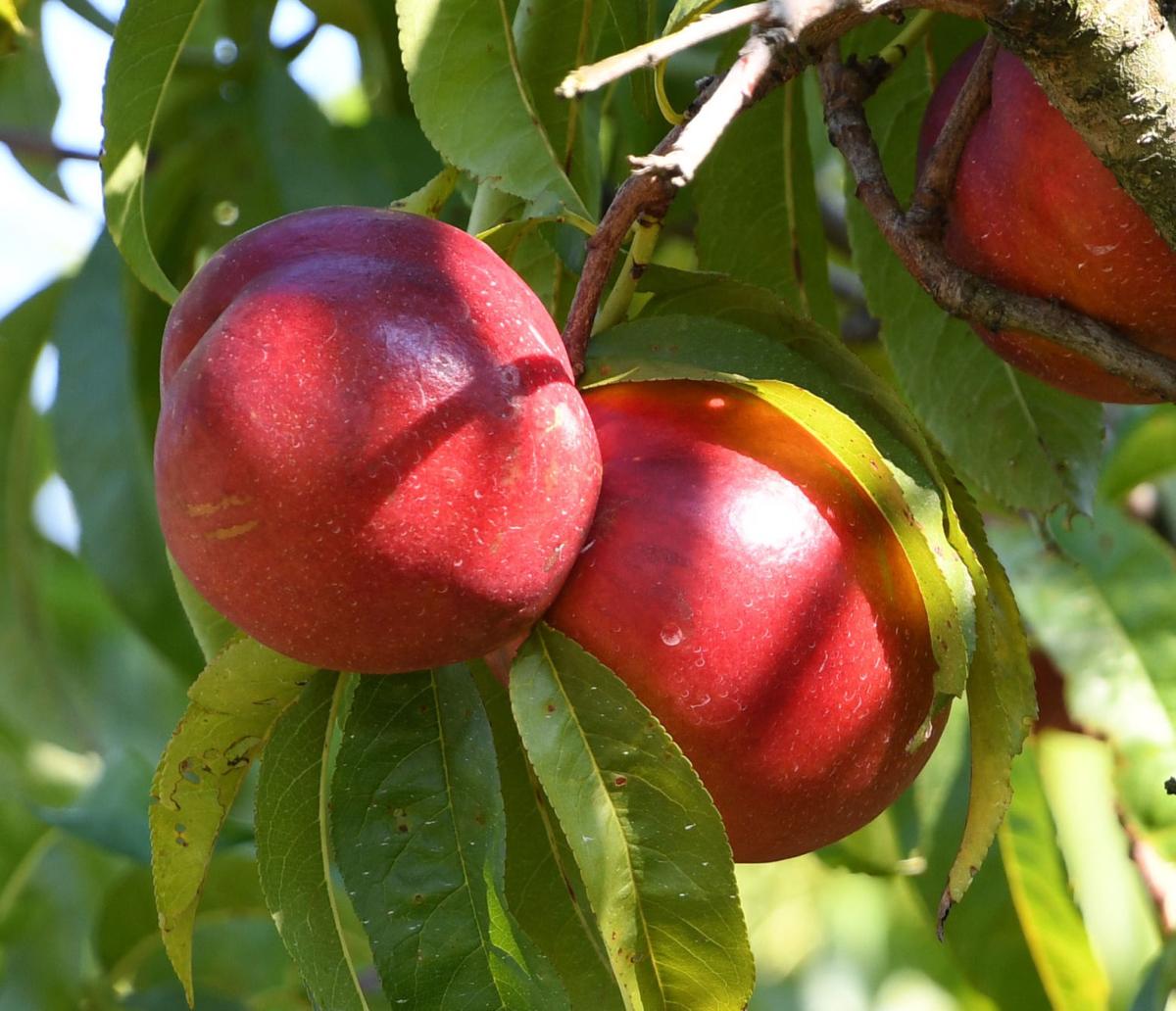 By Ann Fish Special to the News & Record

WENTWORTH Six years after investing in a fruit orchard in the center of Rockingham County, a local couple are reaping their rewards in juicy harvests of peaches, nectarines and apples.

Paul and Veronica Winkler knew nothing about farming in 2014 when they passed a newly-placed “For Sale” sign at the Haight Orchards on Pannell Road off N.C. 65 just west of Wentworth. They stopped to check it out and, on Nov. 24, her mother’s birthday, signed the ownership papers. They christened their farm “Bee Sweet Orchards.”

After their marriage, the West Virginia natives and former schoolmates moved to North Carolina when Paul was transferred with his machine company to Kernersville. They settled in Bethany then relocated to Wentworth, just down the road from the orchards, 21 years ago.

Shortly after moving here, they opened Accu-Rite Machine Shop but eventually “got burned out,” Veronica said, and sold their business.

Sixth-generation apple growers Ed and Eileen Haight had moved from New York in 1987 and started their soon-to-be highly successful new orchards in Rockingham County. Their decision to retire came at the perfect time for the Winklers, who invested the proceeds from the sale of their machine shop into their new venture.

Paul had “always wanted to farm,” his wife noted, but said he kept working at the machine shop until they decided whether they wanted to devote their lives to raising peaches, apples and nectarines.

The Haights agreed to help the new owners the first year.

“We would have never made it without them,” Veronica said, noting “I was like a deer in the headlights. It was all so new to me.”

Their initiation into the business “was like a whirlwind.” They had sold their machine shop and their house and bought a camper trailer to live in for nine months while building a new house on the farm.

The first year went “great” as the Haights helped in the orchard and the store, showing the new owners how they did things. At first Veronica assumed most of the farming duties. She started out “doing a lot of the pruning and stuff like that and Paul helped me in the evenings.”

They had about 800 trees of the three fruits the first year. Since then, they have taken out about 300 of the older trees and replaced them. This spring, they planted 123 new ones but it will be three years before they are ready to produce.

“Then we will take out some more of the older trees,” Veronica said.

Much of their work in the winter is pruning, then removing the old trees, planting new trees and then pulling up the old trees. They prune them in fall and late winter after all the leaves are off. In spring, when the peaches and nectarines are about the size of a small golf ball, they start thinning them. After that, they just maintain them.

The hardest thing has been learning to thin the peaches, Veronica said.

“It is just so hard to throw so many of the peaches off each year to get bigger peaches,” she admitted.

Veronica runs the store and Paul does all the picking, starting as early as 7 in the mornings and stopping about 3 or 3:30 in the afternoons.

“Some days when it is rainy and cloudy, you can’t pick a fuzzy peach because the moisture on them will cause them to rot,” Veronica said.

“When the fruits are in season, it can get kind of manic at times but my customers are very understanding and very sweet,” Veronica said.

Peach season usually starts in late June or early July and runs until around the first of September. The apples start the first of August, and they also end about mid-September. Many of the customers were with the Haights and have “been here for generations,” Veronica said.

“We have good years and bad years.”

Mother Nature has been fairly cooperative, although last year, a hail storm damaged all the fruits and they had to “knock it down half price last year,” Veronica said. “The fruit was still good but it was ugly.”

The second year, “We had that complete frost and didn’t have any fruit that year.

“We just got a break that year,” Veronica said. “God knew we needed to slow down for a little bit.”

The third year was pretty decent, and the fourth year they had hail and “about broke even.”

This year has been dry but that is good weather for the peaches.

“The less the rain, the sweeter the peaches,” Veronica said.

Many customers are repeat customers and start calling early in the season to learn when their favorite fruit will be available.

However, a couple of weeks ago, a crew from WGHP-TV in High Point was on site, filming a special segment. The days after the telecast, cars were lined up the road before the store opened at 9 a.m.

“We gained a lot of new customers,” Veronica said, noting many who have lived in the county all their lives were not aware the orchard even existed.

On rainy days, they are not open except if they have fruit leftover from the day before. The rain and/or overcast skies delays the ripening and the picking so they close earlier because they often run out.

Some people buy the fruit by the pound, but most buy by the peck or half peck. When the crop is plentiful, some purchase by the bushel.

A lot of people share the fruit with friends and families, Veronica said. Several customers bring back samples of things they bake or cook. One year, a young man from Rockingham Community College said he had made a peach cobbler. The workers teasingly asked where their cobbler was, and the next day, “he showed up with one fresh out of the oven.”

A week ago, Veronica said goodbye to her visiting mother, Ann Durham, who returned to Fairmont, W. Va. with lots of peaches and nectarines to share with family and friends. While her mother was there, Vernoica’s sisters, Anna Simpson and Tammye Seidelman, both of Madison, came and the three of them pitched in helping Veronica in the store.

With apples coming in, Paul still will do most of the picking but they also hope to allow customers to pick their own, depending on state regulations due to the coronavirus pandemic. However, since it is outdoors, Veronica believes the pick-your-own option will be allowed.

When she has free time, Veronica loves to sew and quilt, selling some of her creations in the store. A member of the North Star Quilters, she also has made COVID-19 masks and given away a little over 300. When the apple crops are depleted at the end of September, the Winklers will have a couple of months off before they start the pruning of their trees.

After a long day, they relax on their front porch overlooking a pond, enjoy watching the wildlife and scenery — especially spectacular sunsets — and regroup to start the next day on their beloved farm.