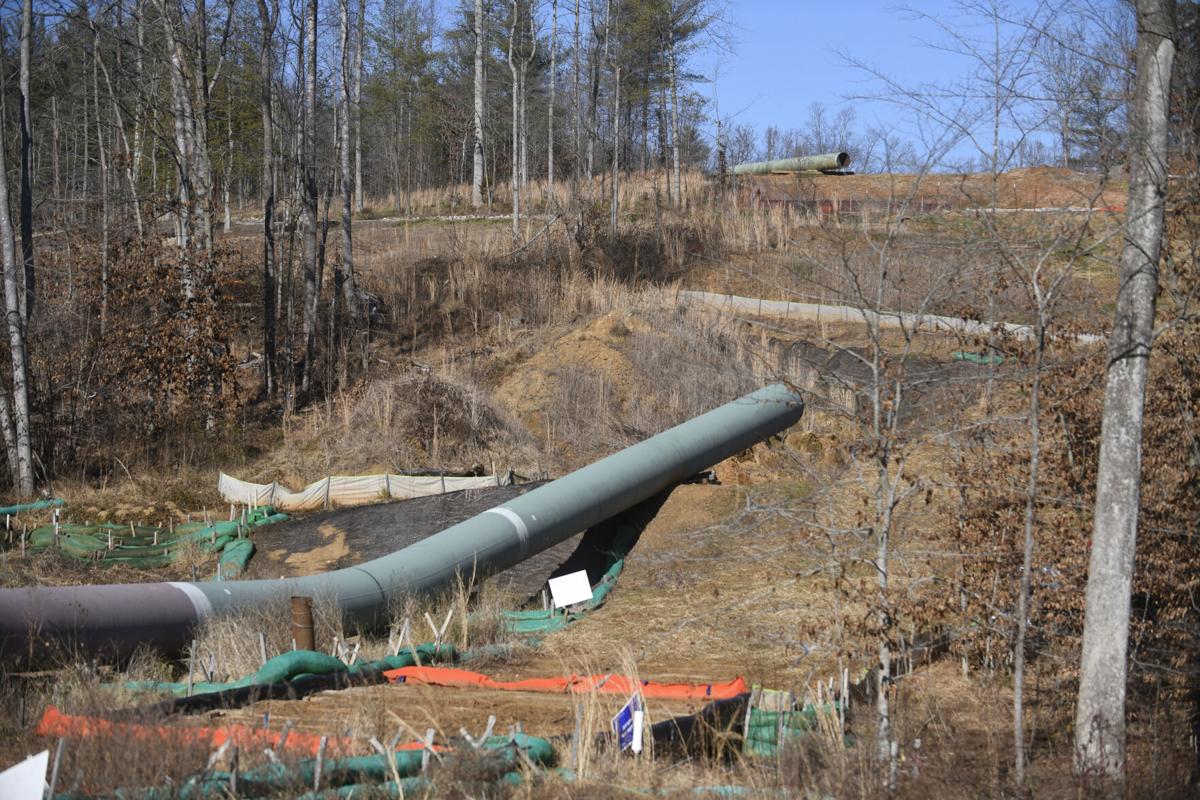 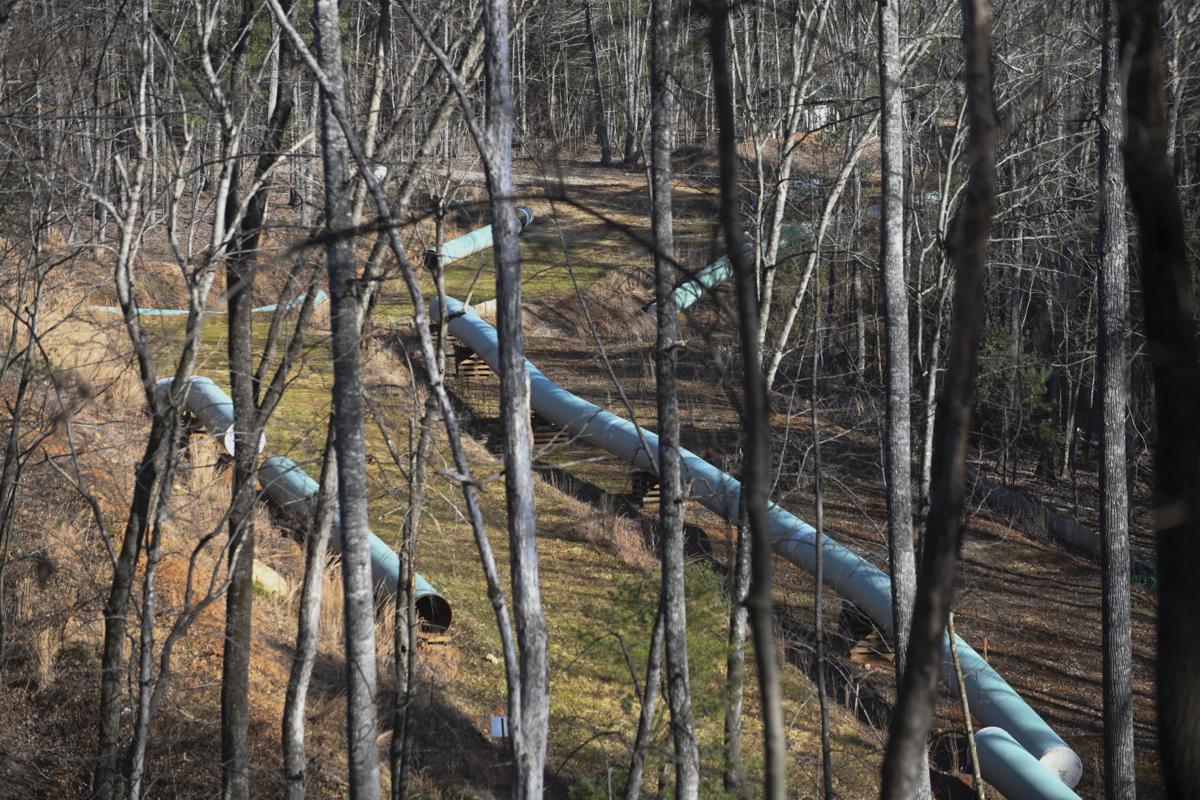 The Mountain Valley Pipeline is seen under construction in Franklin County in December.

Airborne emissions from the operation of the Mountain Valley Pipeline will be countered by the purchase of more than $150 million in carbon offsets, the company recently announced.

The carbon offsets — which are a reduction in greenhouse gases made in one place to compensate for releases elsewhere — will be generated by a methane abatement program at a metallurgical coal mine in far Southwest Virginia. The mine produces coal used in the manufacture of steel.

It will be the world’s largest such program at a coal mine, Mountain Valley said in a news release.

Methane that the coal mine is currently authorized to emit will be converted into carbon dioxide and water vapor and released into the atmosphere, making up for 90% of the more harmful emissions that are expected to be generated by Mountain Valley’s operation and maintenance of the natural gas pipeline.

“We understand the sensitivities that surround the blending of large-scale infrastructure projects with environmental protection,” Diana Charletta, president and chief operating officer of Equitrans Midstream Corp. the lead partner in Mountain Valley, said in the news release.

“Equitrans Midstream is committed to aggressively pursuing climate change mitigation and adaptation while also balancing the immediate and increasing need for energy in our country,” Charletta said.

The program is designed to offset greenhouse gases released from the pipeline’s operation and maintenance, such as carbon dioxide from compressor stations and methane from other sources. It will not cover the burning of natural gas once it leaves the pipeline and is delivered to customers, which Mountain Valley says it has no direct control over.

Mountain Valley’s purchase of the carbon offsets is voluntary. While other government permits for the $6.2 billion project include conditions aimed at reducing its environmental impact, there are no such requirements for greenhouse gas emissions.

Nonetheless, the company wants to address its carbon footprint while continuing to deliver a needed product, spokeswoman Natalie Cox said. “We believe that natural gas plays an integral role in transitioning our economy to both lower-carbon and renewable energy sources,” she wrote in an email.

Pipeline opponents — who say there is no need for the natural gas to be shipped by the 303-mile pipeline from northern West Virginia through the New River and Roanoke valleys into Chatham — were not immediately available for comment.

As part of an agreement with a subsidiary of NextEra Energy Resources, a major generator of wind and solar energy, the carbon offsets will be used to build the abatement program at the coal mine.

The project is expected to reach full operation in 2023.

Cox declined to name the mine, citing contractual obligations. A general location — the mine is near the West Virginia line — was provided to confirm that both Virginias will benefit from improved air quality, she said.

Plans call for the installation of a regenerative thermal oxidizer, which will capture methane from the mine and convert it into carbon dioxide and water vapor to significantly reduce climate impact, Cox said.

The project is expected to reduce emissions from underground coal mining in Virginia by about 25%.

Mountain Valley also commented on a letter from the Environmental Protection Agency that expressed concerns about plans for the pipeline to cross streams and wetlands, including about 150 remaining in Southwest Virginia.

In a May 27 letter to the U.S. Army Corps of Engineers, which is reviewing an application from Mountain Valley, the EPA wrote that the project, as proposed, may not meet its guidelines for protecting water bodies from sediment likely to be released from construction sites.

The company has repeatedly run afoul of regulations meant to limit muddy runoff.

“Based on the information provided to EPA to review, more than 200 of the proposed 719 stream impacts are proposed in the Upper Roanoke watershed,” which includes the Roanoke logperch, an endangered species, the letter states.

Jeffrey Lapp, chief of the wetlands branch of EPA’s regional office, asked in the letter that the permit not be issued until modifications are made. The Army Corps is not expected to take final action on the permit until early next year.

In a reply posted to the Federal Energy Regulatory Commission’s online docket, an attorney for Mountain Valley said that the company is committed to working with the Army Corps and is willing to make changes “to ensure the project avoids and minimizes impacts to streams and wetlands.”

The company appreciates the comments from the EPA, which were submitted as part of a public comment period that included statements from government agencies as well as individuals and organizations, Todd Normane wrote.

“In sum, the application process is working exactly as intended,” his letter stated.

While most of the project is completed, Mountain Valley still lacks permits to cross water bodies and to pass through about 3.5 miles of the Jefferson National Forest.

Mountain Valley initially won approval from the Army Corps for a blanket approval for stream crossings known as a Nationwide Permit 12. That permit was thrown out by a federal appeals court after it was challenged by environmental groups.

The company then sought an individual permit, a process that involves a more detailed analysis of its plans to dig trenches along the bottom of stream beds and bury the 42-inch diameter pipe. For some crossings, it changed its proposed method to boring a tunnel under water bodies, which requires a separate approval from FERC.

The EPA did not submit comments on the Nationwide Permit 12 because that process did not include a public comment period.

The Army Corps will consider the EPA’s concerns, spokesman Chuck Minsker said recently, along with input from West Virginia and Virginia. The two states are expected to decide whether to grant water quality certifications, which would be a precursor to final action by the Army Corps early next year.

Terquavion Smith scores 30 points to lead the East to a 116-92 win over Breon Pass and the West, but "it's all love," Smith says.

The Mountain Valley Pipeline is seen under construction in Franklin County in December.