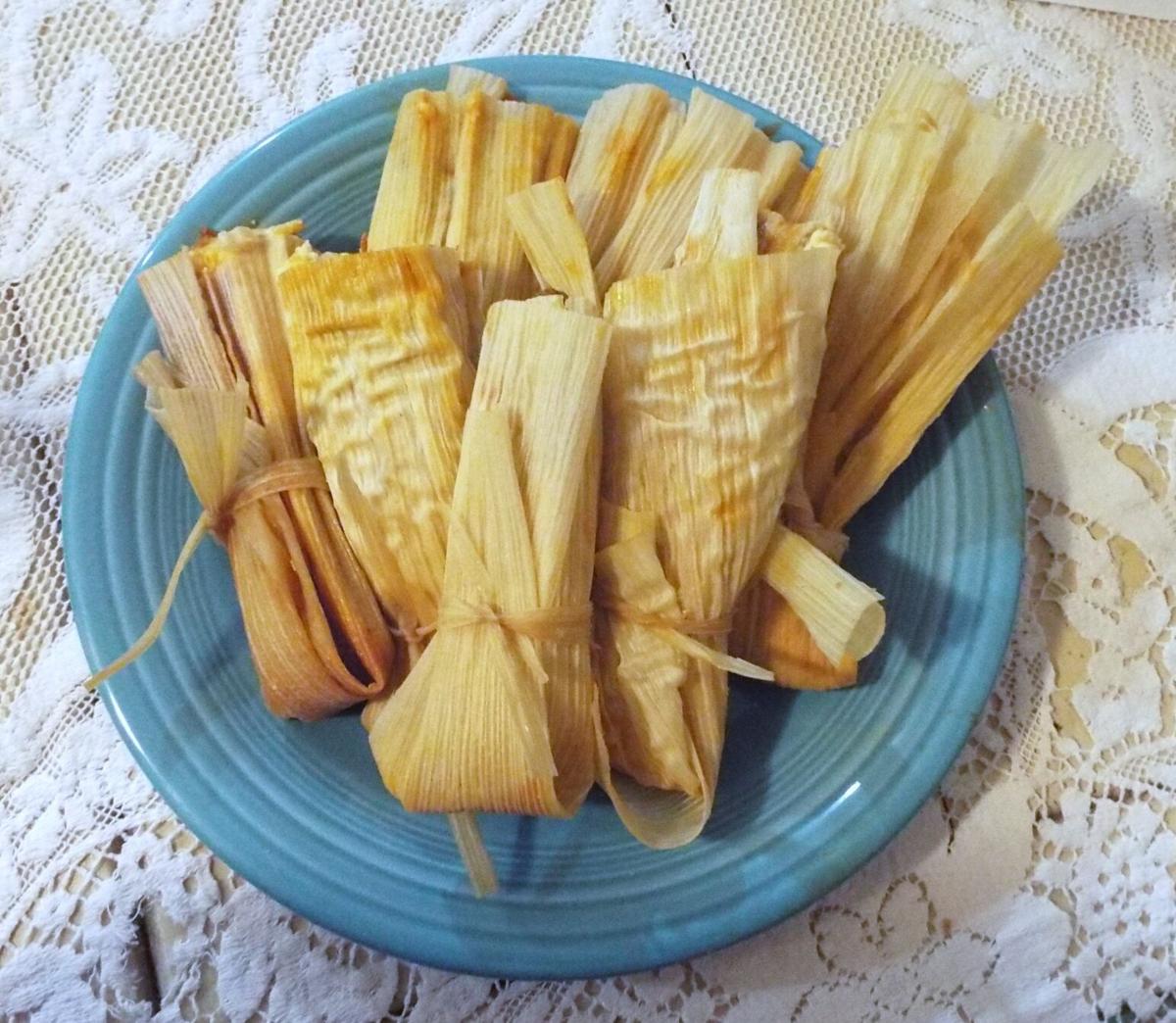 The tamales are ready to eat. 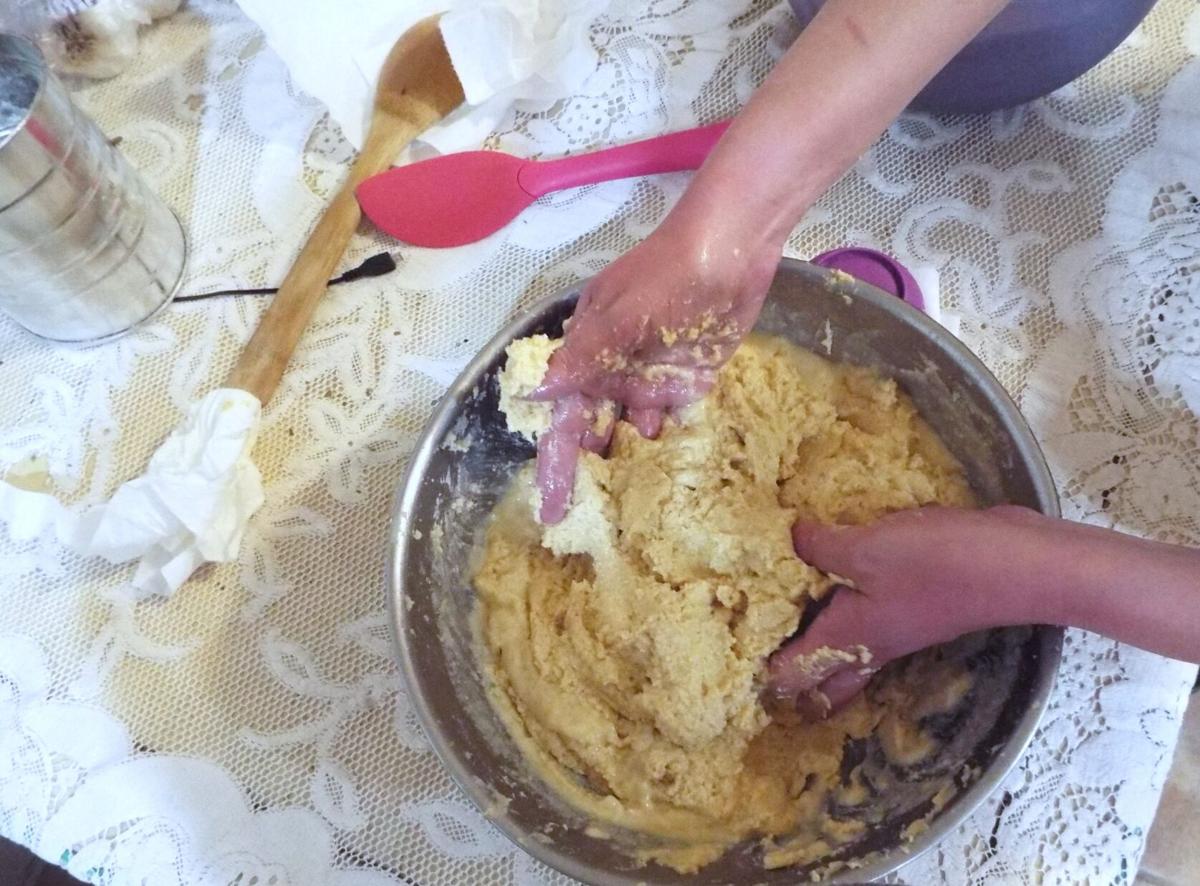 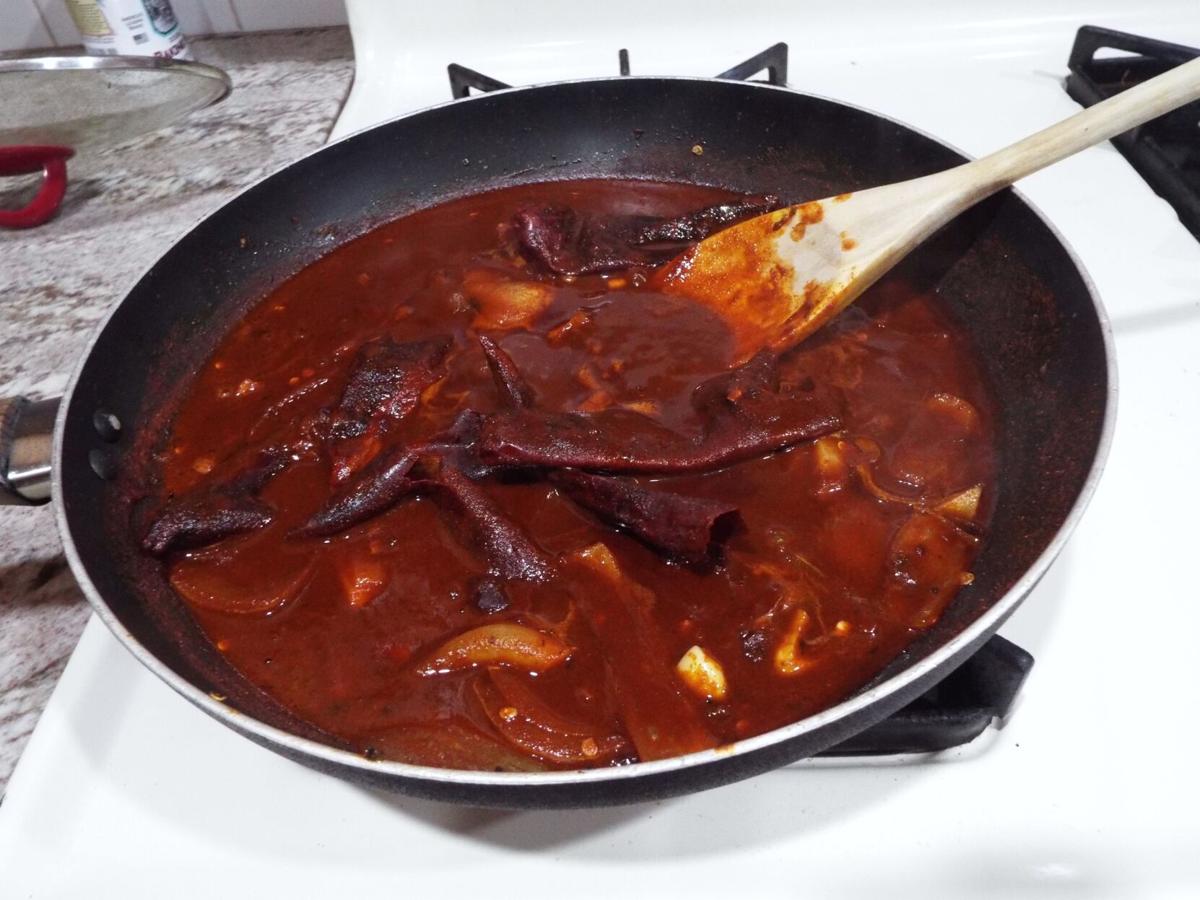 Preparing the chili for the tamales. 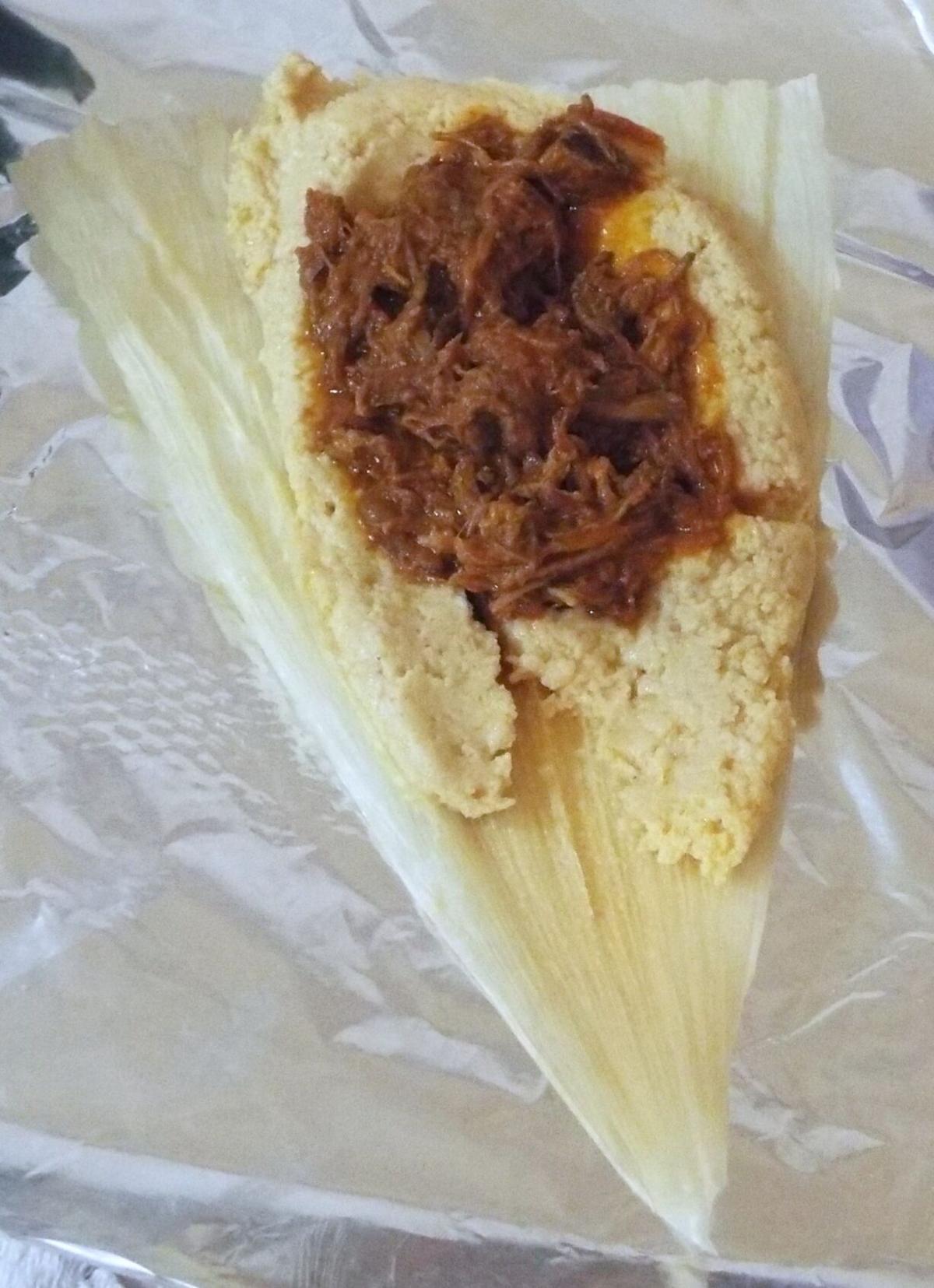 The masa and chili on the husk. 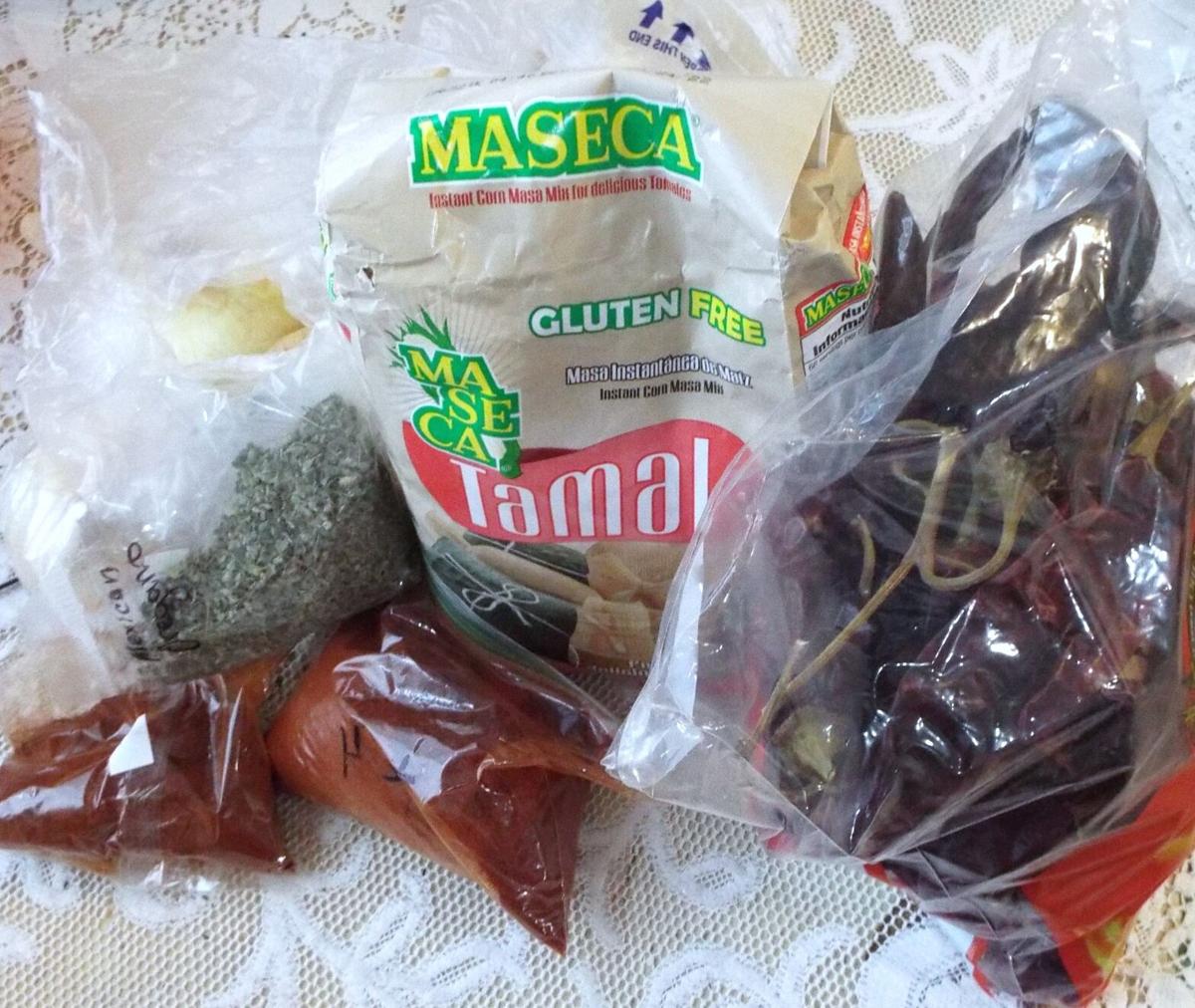 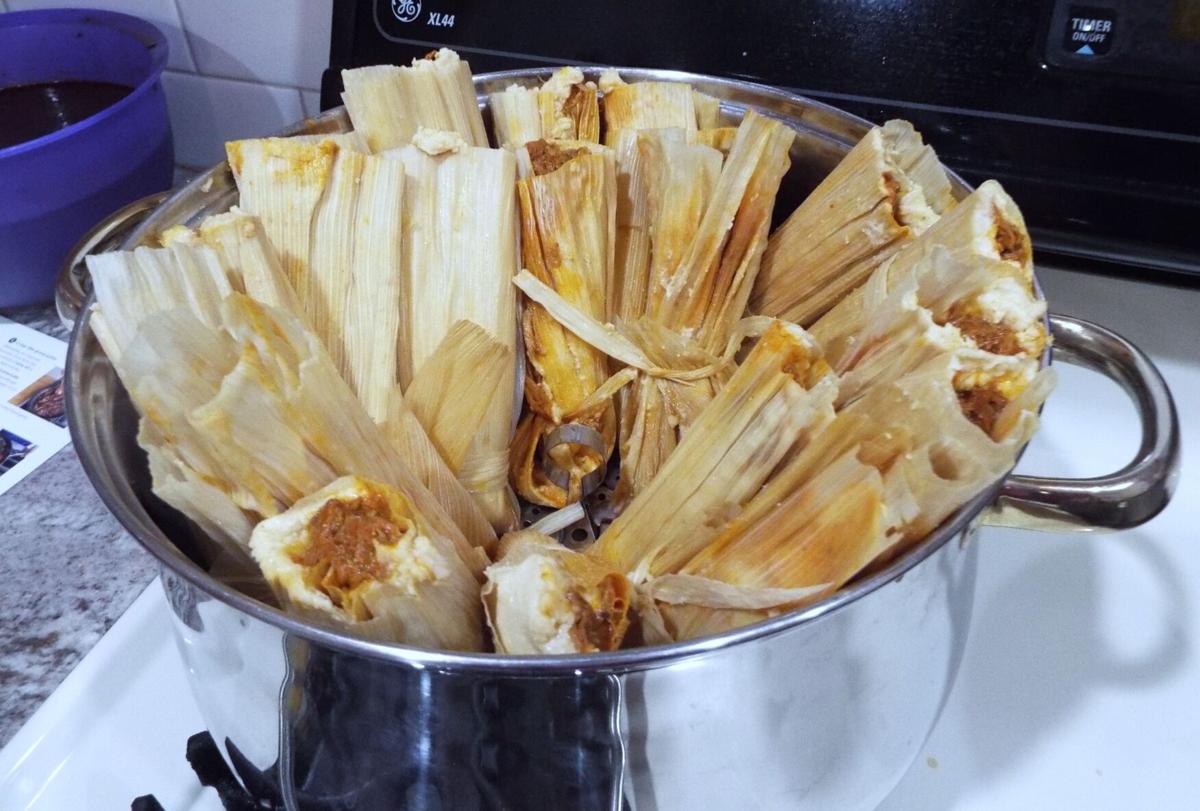 In the steamer before adding the lid. 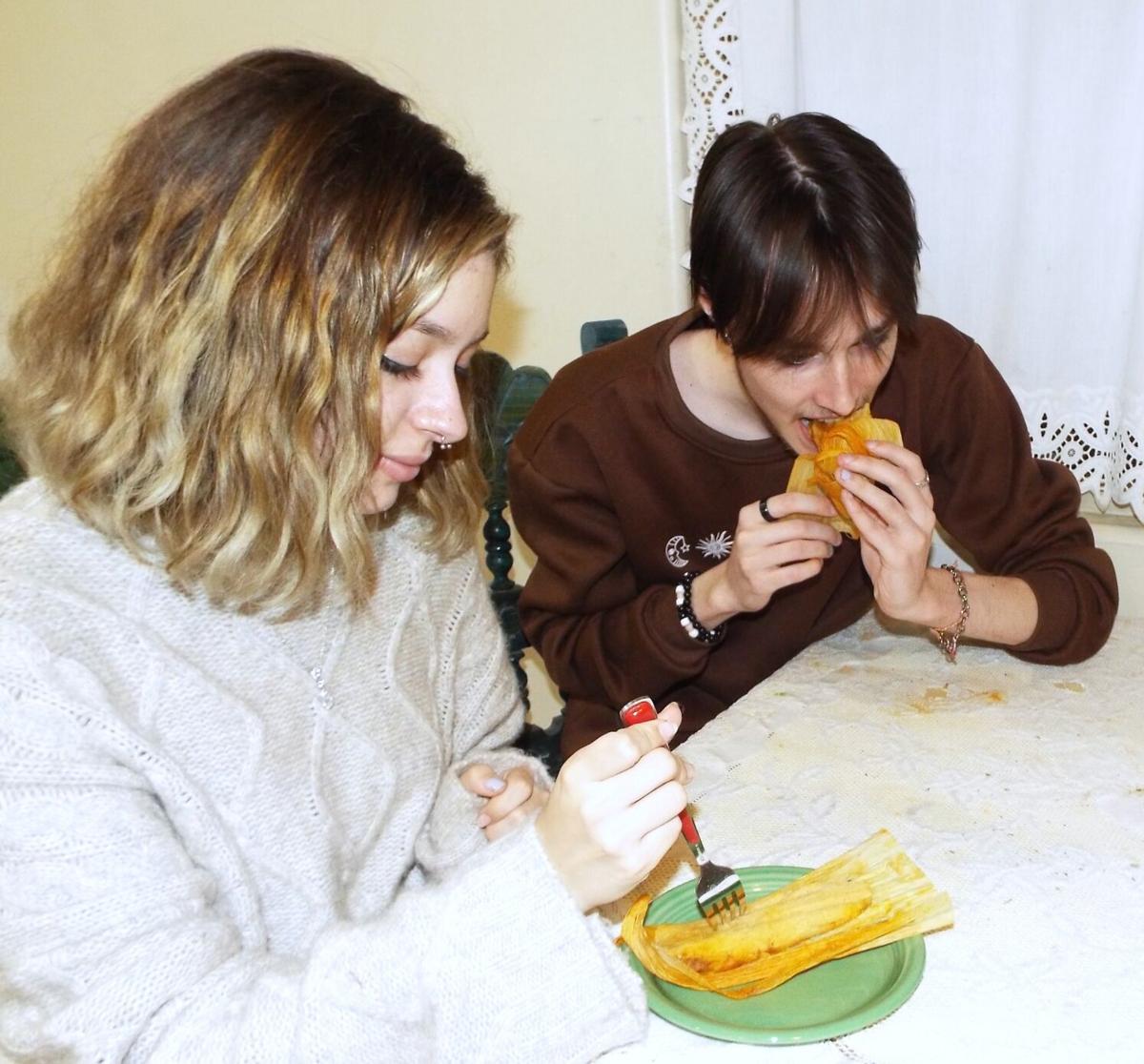 Tamales and chimichangas are my favorite Mexican foods. Ones that taste anywhere near those in Arizona and New Mexico are hard to find in North Carolina.

When I was substitute teaching at Draper Elementary School in the early 2000s, a student learned of my love for tamales. A few days later, his mother arrived with a container of hot tamales she had just finished making.

Years later, a high school student spoke about working in his family’s restaurant, La Jaliciense, in the stripmall behind Meadow Greens. He told me about their tamales. One day, I stopped by for some. Not only were the tamales great, but the family provided friendly service.

Tamales were the first thing I had the night I arrived in Santa Fe for the Christmas holidays as we stopped and got some “to go” along with some guacamole and chips. They made a great “welcome home” dinner!

My oldest grandson, Jude, and his friend, Desiree, decided to make tamales from scratch so I would not only have the freshest available but could learn how to make my own – a traditional Hispanic combination of her family’s and his Grandmother Pacheco’s recipes.

The night before the big day, Jude cooked a four-pound pork roast in the crockpot. He combined the toasted peppercorns, Mexican oregano, medium-spiced chili, bay leaves, garlic cloves, cumin, salt and pepper and rubbed the mixture into the roast. He then cut the roast into six-eight pieces and seared them. After returning the meat to the crockpot, he added the chicken broth and enough water to cover the meat, and left it to cook overnight.

Shortly after midnight, I awoke to a delicious tamale smell. I could hardly go back to sleep thinking about them.

The next morning, Jude removed the pork and saved the broth before finely shredding the beef. The broth was reserved to use in the chili and the hot masa mix.

When Desiree arrived, she began the overall process: First, she put the corn husks in hot water to soak, and began preparing the chili. She then combined the ingredients to cook about 20 minutes. Once done, she removed the chili pepper tops, blended all the ingredients until they were pourable and ran them through a sieve to remove larger pieces.

To the pan with the onion/chili combination, broth, water, red chili powder and whole red chili pods were added to create the chili base. After blending the concoction, it was combined with the shredded pork and set aside.

In another pan, they sauteed more onions and garlic with the addition of whole blackened red chili pods and chicken broth. Sometimes discussions ensued about the way certain things should be done, with the result often becoming something entirely new. The two were creating their own tamale recipe.

“This looks great,” Desiree said as she stirred the resulting chili mixture, adding for my benefit, “it looks like Sloppy Joes.” Another debate followed about whether it was too hot. I was the taste tester, by the way.

Following the instructions on the package, Desiree prepared the masa, substituting the meat broth for half the required water, and kneaded the dough.

Tamale recipes call for lard and only lard can be used – not shortening like Crisco, but pure lard like my Grandma used to make her delicious homemade biscuits. Lard can be found in the Mexican section at most grocery stores.

The next decision was whether the final product should be more masa (crust) and less meat, vice versa, or half and half. Masa is a flour made from dried corn kernels cooked and soaked in a lime solution. It forms the outer coating for the tamales. Desiree mixed the ingredients with her hands, once more reminding me of my grandmother making biscuits the way she kneaded the dough until it was a sticky consistency.

“Everything goes together,” Jude said, before he poured some chili into the masa mixture to create a burnt orange color for the dough.

“Tamales are a labor of love,” Desiree said as she cleared an area to put together the tamales, quickly noting, “It is not difficult.”

The soaked corn husks were dried with paper towels and Desiree took one, cut a narrow 1/4-inch strip from it, and put it aside. Then she placed some dough mixture in the middle of the cornhusk, spreading it nearly to the edges. Next, she topped it with some meat mixture before rolling the husk and its ingredients into a neat roll, flipped up one end toward the middle, and secured it with the narrow cornhusk strip.

Jude and Desiree repeated the process until they had made about 40 tamales. After they were finished, the tamales were placed upright in a steamer of boiling water. The heat was reduced to simmer and a lid placed on the pot. They then were simmered for about an hour until they were done.

The best part of the entire process? When we sat down and ate the finished product. A tough couple of days of cooking had produced tamales comparable to any I had ever eaten anywhere!

GREENSBORO — The last leg of the long-planned 49-mile beltway around the city is entering its final year of construction, state transportation…

Pilot Mountain woman gets prison time for role in the Jan. 6 insurrection. Prosecutors: She took along her teen son.

A Pilot Mountain woman who took her 14-year-old son into the U.S. Capitol building on Jan. 6, 2021 was sentenced Friday to three months in fed…

Gambling addict gets 8 years in prison for robbing 19 stores in Virginia and North Carolina, including in Reidsville, Greensboro and Burlington

Omicron blankets region, unvaxxed the sickest, peak a month away

WENTWORTH — Omicron is, for lack of a better word, everywhere, according to state and regional health care experts.

The tamales are ready to eat.

Preparing the chili for the tamales.

The masa and chili on the husk.

In the steamer before adding the lid.