"Evil and unpredictable': How Dennis Sparks survived COVID-19
0 comments
Share this
1 of 3 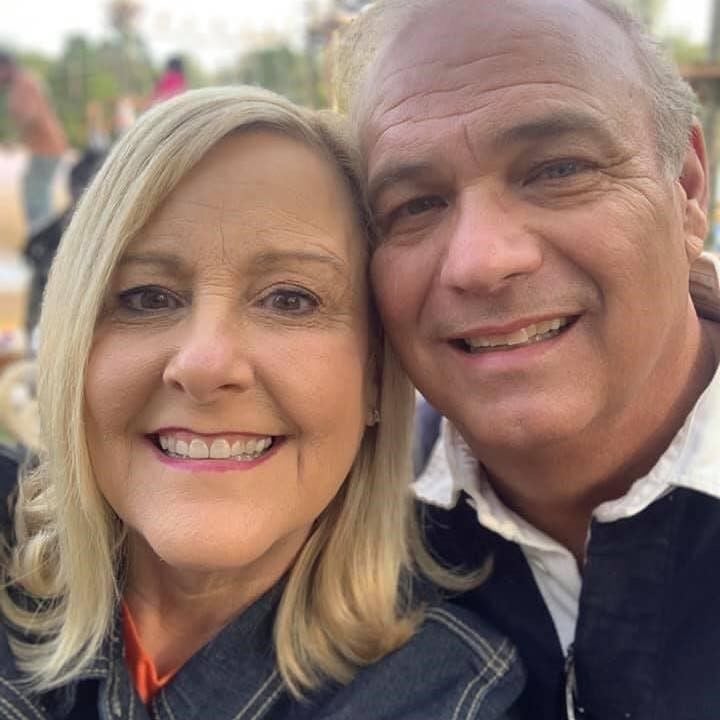 Dennis and Joan Sparks were able to be together for their 43rd wedding anniversary, the very day Dennis was released from Sovah Medical Center in Martinsville after 12 days in the ICU. 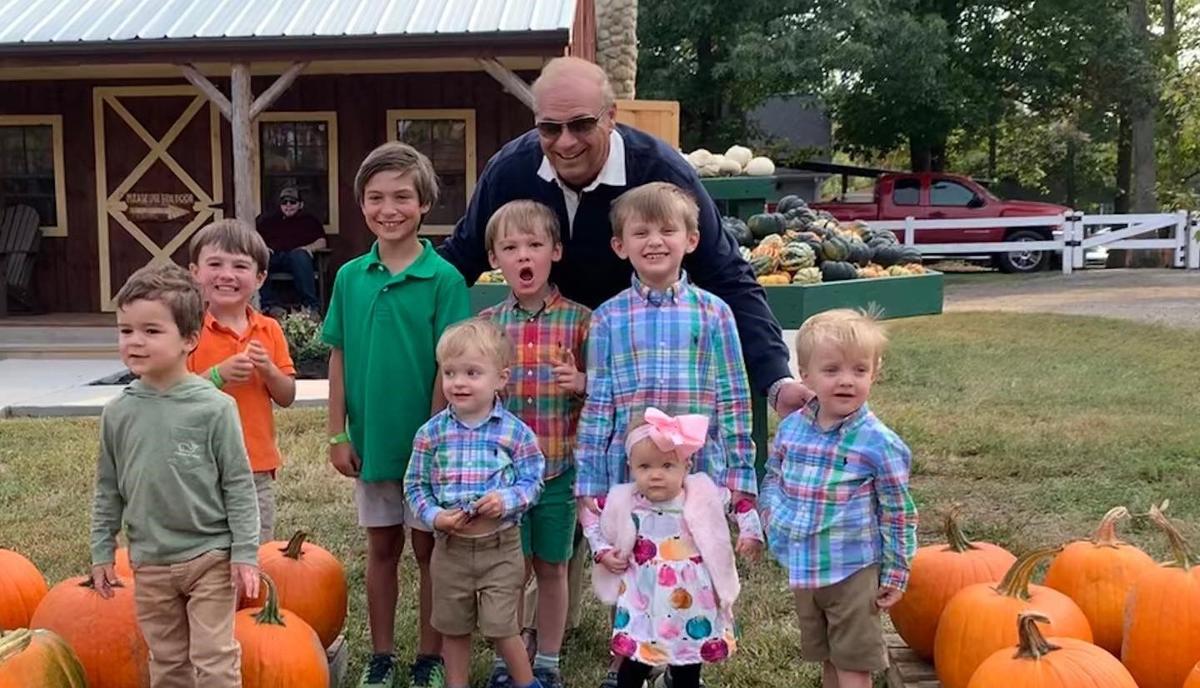 Stoneville restaurateur Dennis Sparks, 63, celebrating his recovery with his bevy of grandchildren in October. 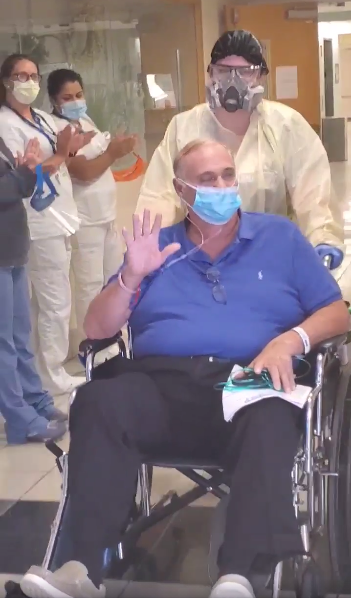 A tearful Sparks left Sovah after two weeks in intensive care. Staff from the hospital clapped as they saw him leave with his wife Joan on their 43rd wedding anniversary.

STONEVILLE — More than six months from the beginning of his battle with COVID-19, Dennis Sparks minces no words.

“This stuff is evil and unpredictable,” he said of the disease that’s killed hundreds of thousands of Americans, including 63 Rockingham Countians,  and disrupted the economy in ways few imagined possible.

“It’s like playing Russian roulette. You never know who it’s going to take out next,'' said Sparks whose scarred lungs will likely take months to heal.

Sparks, 63, is a well-known Rockingham County businessman. He and his daughter, Amy Sparks-Martin, operate Debbie’s Restaurant & Catering, a Stoneville staple.

Watch a video of Sparks and his wife leaving the hospital after he spent 12 days in ICU: https://www.facebook.com/SovahMartinsville/videos/3267798146778845

Need something as simple as a meat and two vegetables for lunch or as complicated as catering for a get-together for 1,000? Sparks and his daughter are the ones to see.

Sparks’ COVID-19 ordeal began at the end of June when he and his family took a trip to their beach house in Surf City. They rent the house through much of the summer to offset the mortgage. And tenants had occupied the house the week before the Sparks family arrived.

Unbeknownst to him, the renters who had just vacated were sick with COVID-19. And Sparks believes their germs may have remained and spread through the structure’s ventilation system to infect him, his wife Joan and others who visited the house.

Sparks and his wife fell sick while still at the beach, feeling generally miserable with plenty of coughing and high fevers.

After returning home to Stoneville, the couple did what they could to treat themselves, taking over-the-counter pain relievers every few hours to keep their fevers down. But for Sparks, nothing seemed to worked. His condition continued to worsen.

Finally, after more than a week and following a call for advice to a CDC hotline, Sparks went to the emergency room at Moses H. Cone Memorial Hospital in Greensboro for COVID-19 testing. As expected, results were positive.

But Sparks’ condition didn’t appear especially dire at that point. His lungs were relatively clear, his blood work good and his temperature close to normal. Sparks was hopeful he was turning a corner and would soon be back to feeling his normal self, so he opted to return home.

Turns out, for Sparks, the positive test was just the beginning of his battle.

Two days after the diagnosis, he awoke realizing, “I was literally suffocating,” he said. “I absolutely couldn’t breathe.”

Sparks, who said he was pretty healthy prior to all this, describes himself as “one of the early bad cases in the area.”

He experienced a condition seen often in seriously ill COVID-19 patients known as a cytokine storm. During such a syndrome, the immune system kicks in so powerfully to battle the novel coronavirus, that it begins attacking the body’s organ systems. In Sparks’ case, the storm unleashed a nearly lethal attack on his lungs.

He was eventually hospitalized at Sovah Health in Martinsville, Va., where he remained for the next two weeks, spending 12 days in the intensive care unit.

“The first six days, I was literally fighting for life and breath,” Sparks said.

Sparks hung onto his bed railing, looking up at a monitor, praying for the strength to hold his blood oxygen level high enough to avoid being placed on a ventilator, he said.

And doctors administered to Sparks every medication believed to have a chance of helping him. They included daily doses of blood thinners and steroids, plus massive doses of vitamin C and Zinc.

But improvements were negligible.

Turns out, Sparks had a number of things working against him. One was his moderately high blood sugar levels which his steroid treatments drove to extreme highs.

Also, Sparks’ blood type — A-positive — may have put him in peril. For reasons doctors can’t yet explain, patients with the blood type appear to have a worse time than others combatting COVID-19 infections.

Sparks’ wife is a former operating room nurse and other family members also have experience in the medical profession. In an effort to help Sparks, they reached out to anyone they knew who might have advice.

Finally, someone suggested an experimental drug named Actemra, proven to have some success in the fight against COVID-19. The immunosuppressive drug is also known by its generic name, tocilizumab, and is typically used to treat severe forms of arthritis.

Sparks said that within hours of receiving the first dose of the drug, he felt improvements, with his lungs beginning to open a bit. At last, he was able to begin breathing on his own.

“It started turning things around for me,” Sparks said.

He was finally released from the hospital on July 23, which happened to be the Sparks’ 43rd wedding anniversary.

A videotape of him departing the hospital that day shows his reunion with Joan as she pushes his wheelchair to a lobby celebration where hospital staff bid him well. He thanks them through tears.

Sparks, who has lost several friends to COVID, doesn’t take for granted anything involving his improvement.

“Thanks to the good Lord, some amazing nurses, doctors, medical staff and my awesome wife and family, I survived,” Sparks wrote, recounting his near-death experience.

Sparks and his wife drove across the hospital’s parking lot as they left Sovah— the lot where Joan had spent nights alone in her car, praying for her husband she wasn’t allowed to see.

Sparks lost 42 pounds from the ordeal, which he jokes, “might be the one good thing to come out of this experience.” And he still has a way to go before his recovery is complete. He has trouble climbing stairs and walking steep inclines, due to the lung tissue scarring from COVID-19.

Sparks also worries about his restaurant and catering company and whether it can survive all of the restrictions on businesses the pandemic has made necessary.

But Sparks has come away from it all with a new appreciation for his life, his family and all the world might offer.

“We’ve been to hell and back,” he said. “I’m so blessed and appreciative to be alive.”

REIDSVILLE — Monday night's Rockingham County School Board meeting may have drawn the most public comment of any in its history, with scores o…

Rock Co. vaccinations continue for 65-plus on Thursday; cases up 526 in last week

Reidsville Police have 3 suspects in custody for Oct. and Dec. homicides

River Paddlers raise $1,200 for locals in need of food

ROCKINGHAM COUNTY, NC — Converting paddle power into food for the hungry is an annual mission for organizers and participants of the Mighty Ma…

Vaccinations for 75 and up continue; nearly 300 diagnosed with COVID-19 over weekend

Dennis and Joan Sparks were able to be together for their 43rd wedding anniversary, the very day Dennis was released from Sovah Medical Center in Martinsville after 12 days in the ICU.

Stoneville restaurateur Dennis Sparks, 63, celebrating his recovery with his bevy of grandchildren in October.

A tearful Sparks left Sovah after two weeks in intensive care. Staff from the hospital clapped as they saw him leave with his wife Joan on their 43rd wedding anniversary.