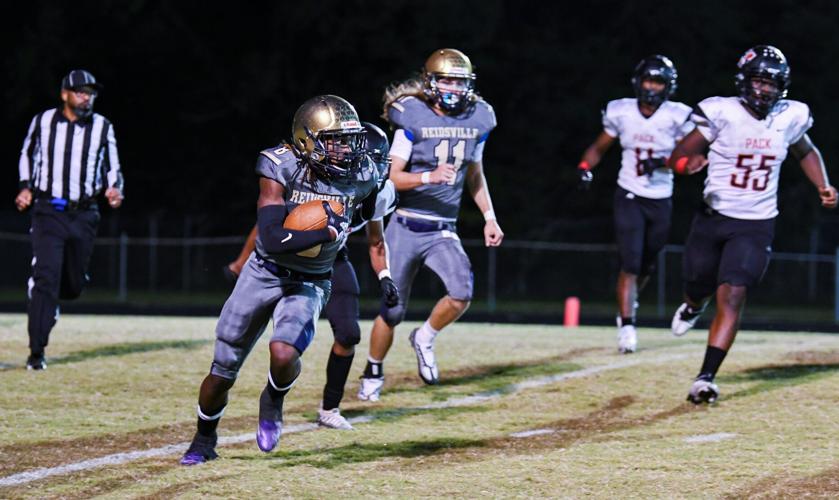 Senior wide receiver Tamir Johnson breaks into the open for a gain in Reidsville’s 19-6 Mid-State 2A league victory over Walkertown on Monday night at Community Stadium. 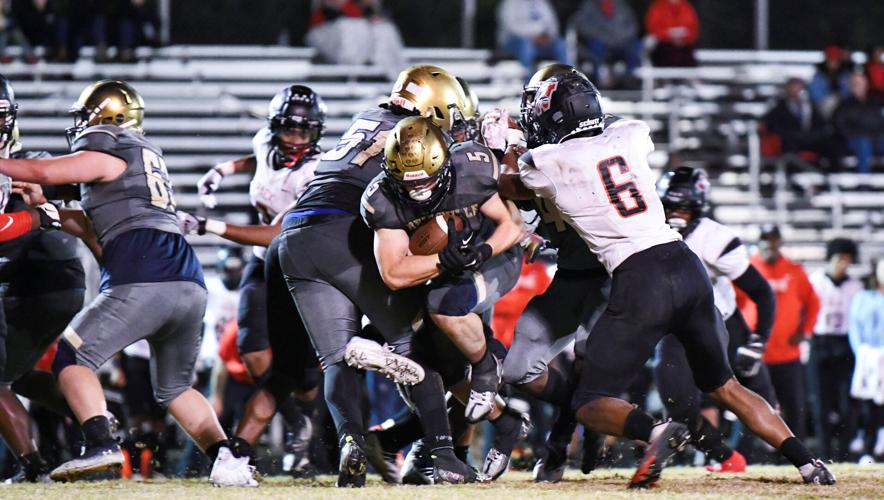 Junior Paul Widerman blasts his way forward to keep the chains moving in action versus the Wolfpack at Jimmy Teague Field. Widerman would go on to score on a touchdown reception from 19 yards out and was also a leader on defense as a linebacker with 10 solo tackles. 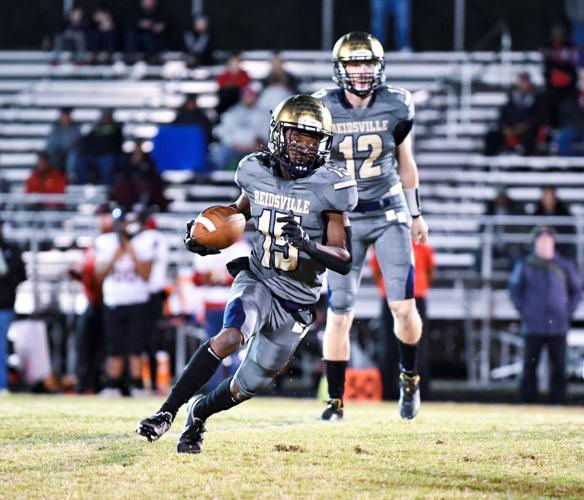 Freshman wide receiver Dionte Neal finds daylight around the edge on an end around play that resulted in a first down for Reidsville. 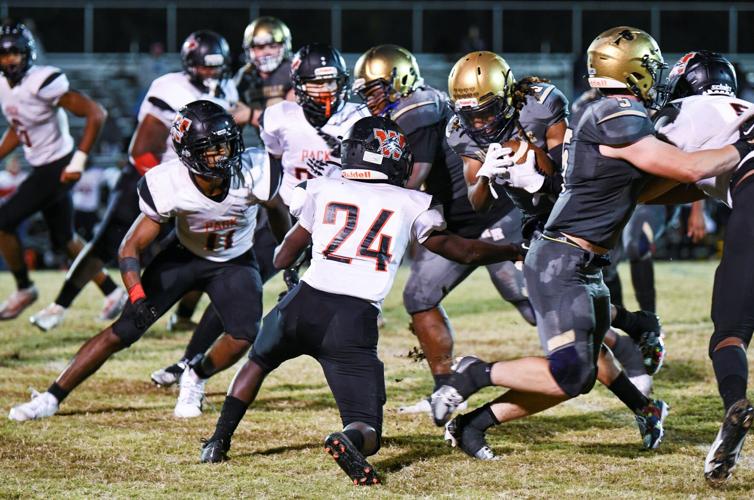 Despite three turnovers and a couple of missed scoring opportunities, Reidsville made a key defensive stand in the fourth quarter and added an insurance score down the stretch to secure a 19-6 Mid-State 2A league victory over Walkertown on Monday night.

The Rams were playing short-handed with several key starters out due to injury, including quarterback Al Lee, who was in a boot after tweaking his ankle. Also in street clothes was leading receiver and defensive back Que’shyne Flippen as well as wide out and defensive end Devin Shryock.

After forcing a three-and-out, Reidsville took charge in the early going with a score on the opening drive of the first quarter. To get cranked up, a 27-yard pass from Landon Denny to Tamir Johnson had the Rams in prime scoring position at the Walkertown 21 yard line. On the next play from scrimmage, Jariel Cobb hit the seam off tackle, taking a shot at the 5 yard line, but he blasted his way to the end zone for the 7-0 lead following the Ivar DeJong P.A.T. with 8:10 to go in the opening frame.

The Rams defense never let the Wolfpack’s offense get anything going, but Reidsville’s offense stalled on their next several possessions to make it anyone’s game for the taking.

Walkertown finally strung together a solid drive making it all the way down to the Rams 1 yard line, but the ball got punched out just as the ball carrier crossed the goal line and Tamir Johnson scooped up the pigskin. Johnson narrowly avoided being tackled for what would have been a safety, but he slipped out and nearly broke it for what would have been a 100-plus-yard score. He slipped the clutches of a Wolfpack defender, however, and raced down the sideline all the way down to Walkertown 33 yard line.

Following a 15 yard gain on an end around by Reidsville freshman Dionte Neal, Denny hit Paul Widerman on a screen pass on the left wing. The junior proceeded to tuck it, gather a head of steam, and make it past the pylon for the touchdown from 19 yards out. The 2-point conversion pass fell incomplete, but nevertheless the Rams were in the driver’s seat with a 13-0 lead with 4:51 to go in the second quarter, a score that held at halftime.

Early in the third quarter, Walkertown pounced on a Reidsville fumble, and then on the next offensive play, Jeremiah McIntyre-Peoples broke the line of scrimmage, hit the outside and raced 62 yards before being chased down at the Rams 19 yard line.

Three plays later, Walkertown QB Bryce Baker threw a 5 yard touchdown pass to Zion Moye. The P.A.T. was no good, but with the Wolfpack score cut it to a one-possession game at 13-6 with 7:43 to go in the third period.

Following an interception by Chris McCorckle in Rams territory near midfield, Walkertown strung together a nice drive primarily running the ball, spearheaded by backup quarterback Zahki Mitchell that took the Wolfpack all the way down to the 16 yard line. Baker left the game briefly after a vicious hit that forced him to miss the majority of the drive. Reidsville dodged the potential scoring bullet however. Facing fourth down and 3 yards to go, Baker came back into the game and threw an incomplete pass on the right wing giving Reidsville the ball back with 1:08 to go in the third period.

Both teams made defensive stands on their first possessions of the fourth quarter, but Reidsville went back to the ground game and, rushing by committee, put together an 11-play scoring drive. Running back Jeremiah Redd crossed the goal line from 6 yards out, but the ball was jarred loose. Fortunately, Rams offensive lineman Titus Burson recovered the fumble in the end zone for a touchdown. The P.A.T. failed, but it proved to be just the cushion Reidsville needed to lock up the 19-6 victory.

“Defensively, we dug it out and found a way to win. Sometimes you have to win with tough defense and the defense bailed us out tonight. We shot ourselves in the foot way too much offensively,” Reidsville head coach Jimmy Teague said.

Despite the disappointment of the outcome, Walkertown head coach Garrett Mills said he was proud that his guys were in position to win the game against a state power like Reidsville.

“We preach playing the ball, so that’s one thing we started with the kids this summer. I thought our guys fought very hard. We’ve done a great job of handling adversity. Hats off to Reidsville – they are a top-notch program. I’ve been blessed to coach under that type of system and have really learned, so that is what I am preaching to my guys,” said Mills.

Mills actually has indirect ties to the Teague coaching tree. He served as the defensive coordinator for former Reidsville head coach Doug Robertson at Page High School. Robertson was a former player and assistant for Teague before becoming a head coach.

Even though banged up, the Rams have put themselves on track to potentially claim the Mid-State 2A Conference regular season championship which would earn an automatic post season bid. They are currently enjoying a five-game winning streak at the midway point of the season, with their only blemish being a 22-14 loss to Page Aug. 26.

“Hopefully, with this week off, we can get them healthy for the next Friday. This bye couldn’t have come at a better time,” Teague said.

Local firefighters called on any and every firefighter from Rockingham County to come to their aid.

State and local officials will on hand to celebrate the opening of the final three miles of the Greensboro Urban Loop.

Promising 'opportunity for everyone,' Stein will run for North Carolina governor

North Carolina Attorney General Josh Stein will run for governor in 2024, he announced in a video Wednesday morning. The news confirms widespread speculation that he’d seek to replace Gov. Roy Cooper, a fellow Democrat, who is term-limited and can’t run again. His video starts with a story about his father, a civil rights attorney whose law firm was fire-bombed in 1971, during a legal battle ...

Why? Understanding High Point tragedy hard for those who knew Robert Crayton.

"Robert was battling something behind the scene that we couldn't see," Tisha Joyner of Maultsby Talent Agency in Raleigh said in a statement about Robert Crayton.

Study: To win more in North Carolina, Democrats need to change this one thing

There’s a reason Democrats struggle to win statewide elections in North Carolina and there’s a way they can do better.

“When Administrator Regan was my student, I pushed and worked him very hard. We created a vision together and I told him not to be afraid to jump in,” said Godfrey A. Uzochukwu, a professor in the College of Agriculture and Environmental Sciences at A&T.

EDEN — On Tuesday, this city and its biggest industrial client, Nestle Purina PetCare, were awarded a federal cash infusion of $1.5 million th…

Senior wide receiver Tamir Johnson breaks into the open for a gain in Reidsville’s 19-6 Mid-State 2A league victory over Walkertown on Monday night at Community Stadium.

Junior Paul Widerman blasts his way forward to keep the chains moving in action versus the Wolfpack at Jimmy Teague Field. Widerman would go on to score on a touchdown reception from 19 yards out and was also a leader on defense as a linebacker with 10 solo tackles.

Freshman wide receiver Dionte Neal finds daylight around the edge on an end around play that resulted in a first down for Reidsville.