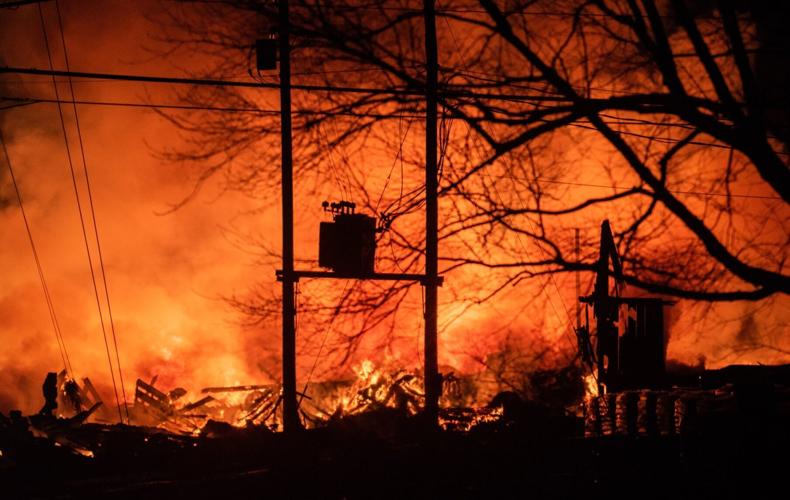 Six months ago fire destroyed the Winston Weaver Co. fertilizer plant in Winston-Salem. Two separate probes came to the same conclusion on the cause — “undetermined.” 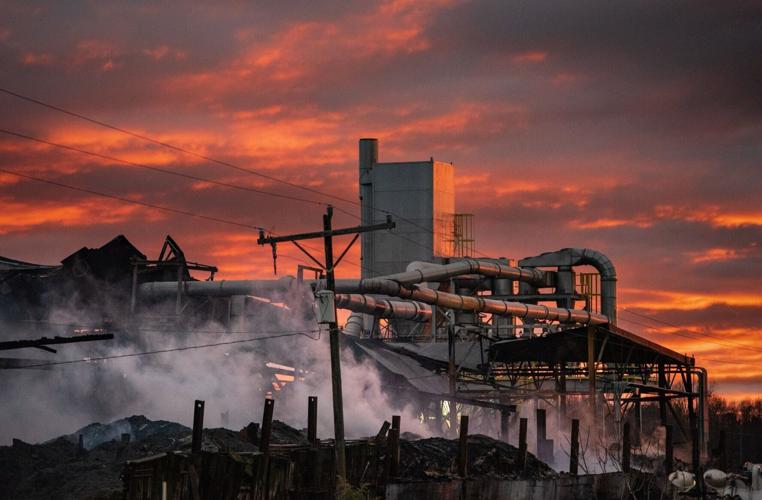 The sun sets at the site of the Winston Weaver Co. fertilizer plant fire on Feb. 4. Two separate probes could not determine a cause of the fire.

Investigators can’t figure out what caused the massive Jan. 31 fire that destroyed the Winston Weaver fertilizer plant in northern Winston-Salem.

That’s the conclusion Winston-Salem officials are making as both city and insurance company investigators have wrapped up their probes of the fire’s origin.

City officials said they looked at everything from arson to the weather as they tried to figure out a cause.

The fire department report is a submission the city made online to the State Bureau of Investigation on July 26. Made by Assistant Fire Chief A.T. Byrum, the report estimates the dollar loss to the property at $1.95 million. The plant stood at 4440 N. Cherry St., near the intersection of Cherry Street and Indiana Avenue.

“Fire department arrived on the scene to find a large fertilizer factory with heavy fire involvement,” the report summarizes. “It was relayed to responders there was a large amount of ammonium nitrate on the premises ... the majority of the premises suffered heavy damage from fire and water.”

The night of the fire, orange flames roared high into the sky, and thick smoke billowed up from the burning factory. The threat of an explosion caused the city to put in place a voluntary mile-wide evacuation zone.

The fire burned for days and reduced the plant to a mass of twisted metal, ashes and other rubble. Everyone breathed relief when an examination of the rail car showed that the ammonium nitrate inside had made it safely through the conflagration.

Although the investigations by the city and insurance companies may have been completed, the Winston Weaver company still faces five lawsuits filed since the fire. In a consent order entered on April 11, Winston Weaver agreed to store tagged evidence in a secured, temperature-controlled environment. The company agreed to preserve any and all photographs and videotapes, including drone footage of the fire.

Some miscommunication over the status of the fire investigation caused some confusion among city officials Friday night. That evening, Fire Chief William “Trey” Mayo told City Manager Lee Garrity that despite the wording of the report to the SBI, the fire investigation was not complete because the city was waiting on the results of laboratory testing being carried out by insurance company investigators doing their own work on the fire.

According to Garrity, Mayo then learned from his staff Friday night that the test results had come in last week, and that the cause of the fire is officially undetermined.

The Journal has been trying to get copies of the city’s Weaver fire reports since June, when city officials declined to release them, citing them as records of a criminal investigation. Although city fire officials have never publicly asserted that they believed the fire had criminal origins, Mayo said that the possibility that the investigation could reveal wrongdoing made the records off limits to the public.

More recently, a Journal reporter pointed out to the city attorney’s office that state law requires fire investigators to provide the SBI with information within a week of a fire about the cause of the fire and the value of the property lost. But when the reporter asked the SBI for the information provided to it by the city, SBI officials said that no agency had submitted fire reports.

City Attorney Angela Carmon said in an email that the city believed it had complied with the law because the SBI had been invited into the investigation from the start, and had made no request for further documentation.

At the same time, “in an abundance of caution,” Carmon said, the city would go ahead and file an online report with the SBI. That’s the July 26 report that calls the investigation complete and the cause of the fire as undetermined.

Mayo had said from the beginning that the cause of the fire may never be known. In its report to the SBI, the city said it had looked for causes that included discarded smoking materials, electrical and mechanical origins, and chemical or spontaneous causes along with the possibility the fire was intentionally set.

Council Member Jeff MacIntosh expressed no surprise on Friday that no cause for the fire had been found.

“How do you dispute the fact that it was a conflagration that destroyed all the evidence, or non-evidence, of what occurred?” MacIntosh asked. “When things get that hot, they don’t leave that much behind.”

MacIntosh chairs the city’s Public Works Committee, which has spent several months so far examining what changes the city can make to reduce the likelihood of future fires of the magnitude of the Winston Weaver fire. That committee will be continuing its work in August.

“There are certainly things the city can do to keep this from happening again,” MacIntosh said.

Noel Ruebel, a former track coach at FCDS and Wake Forest, has died at the age of 66

Noel Ruebel, a track and field coaching legend at Forsyth Country Day School for nearly 20 years and a former track coach at Wake Forest, has died.

Before he leaves for a new position at the University of Arizona, Duane Cyrus will present a multi-disciplinary performance art installation and community discussion, titled "Time: Liminal." It's the focus of his Residency at the Hyers.

Six months ago fire destroyed the Winston Weaver Co. fertilizer plant in Winston-Salem. Two separate probes came to the same conclusion on the cause — “undetermined.”

The sun sets at the site of the Winston Weaver Co. fertilizer plant fire on Feb. 4. Two separate probes could not determine a cause of the fire.