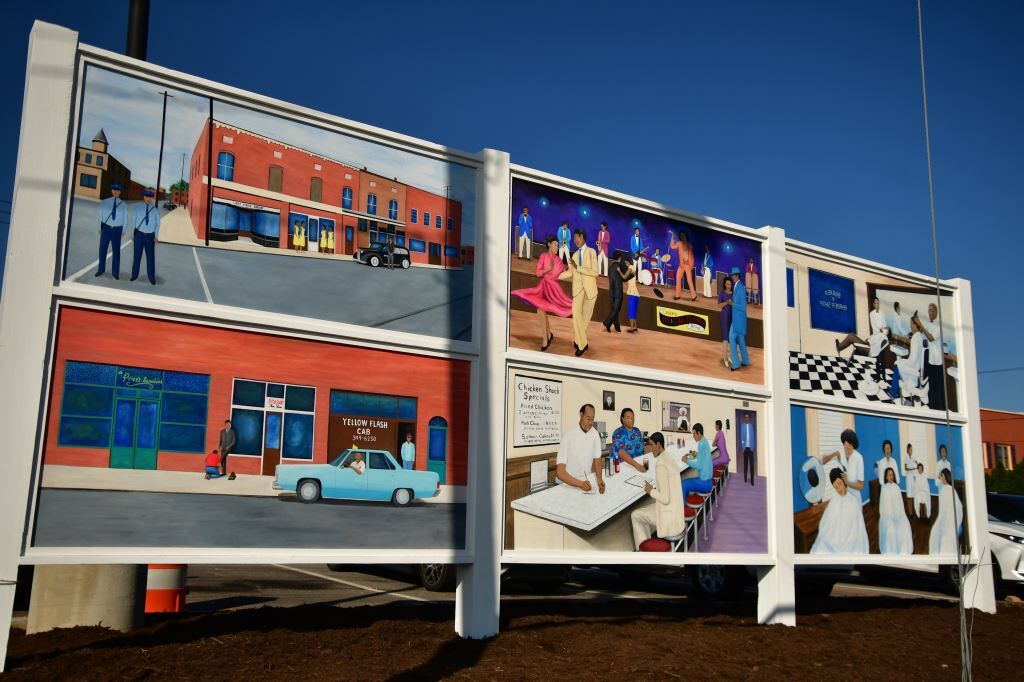 The Block Mural depicts what life was like in the Black-Owned Business District. 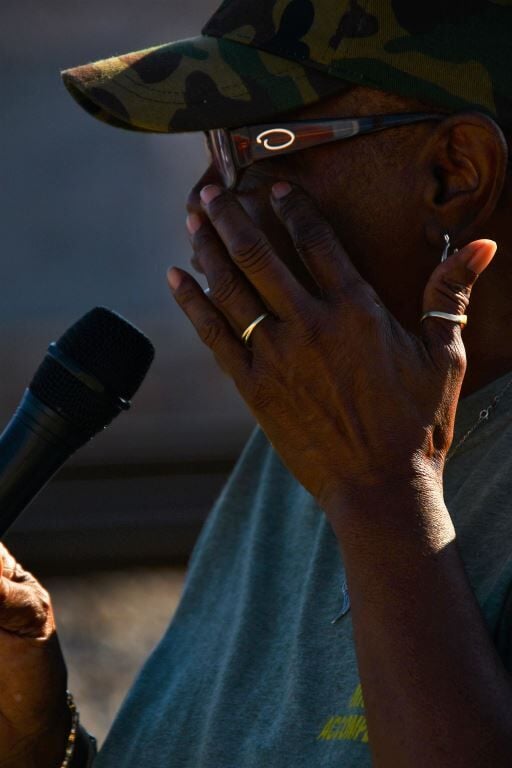 Catherine Wilson got emotional when she saw the final product. 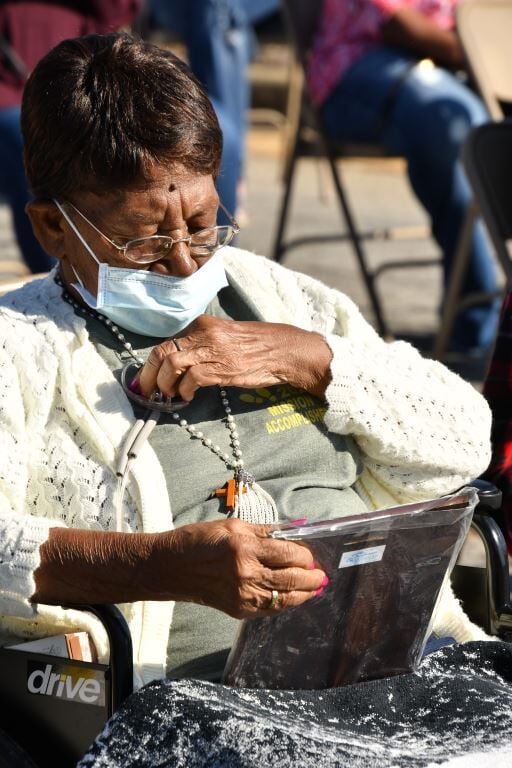 Hulene Blackwell Totten was presented a plaque during the mural’s unveiling for sharing her journal entries and memories for the project. 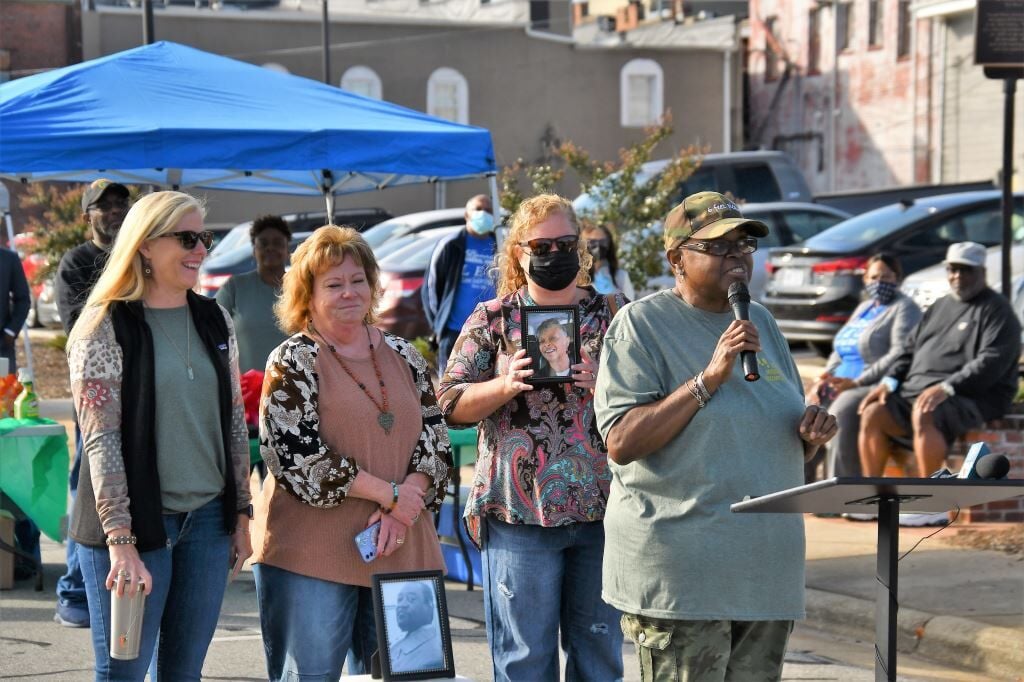 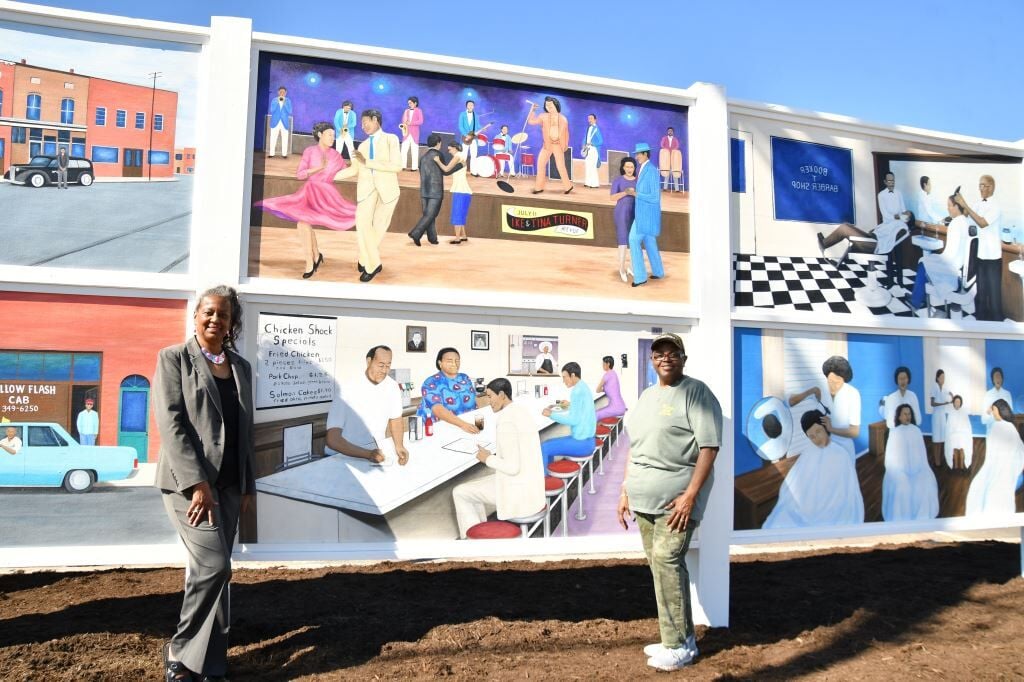 Denise White, who helped with editing, and Catherine Wilson posed for a picture with the mural at the unveiling. 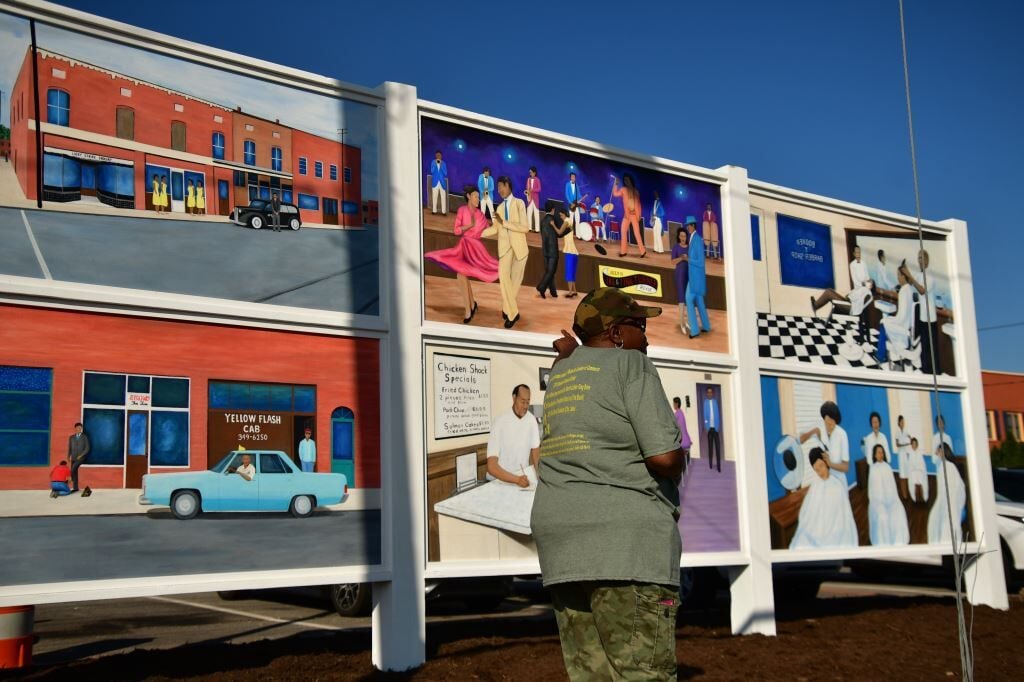 Catherine Wilson could not believe how well the finished product turned out.

Located on what is now Martin Luther King Jr. Drive and used to be the Black-Owned Business District, the mural was unveiled Oct. 23. With three sections and six panels, it represents what life was like on The Block from the 1930s through the 1980s.

The City of Reidsville Marketing Department, as well as the Reidsville Downtown Corporation, partnered with Catherine Wilson and the Old School Block Committee to make the mural part of the Project DREAM (Downtown Reidsville Empowering Art Movement) initiative.

“How do you depict an entire community in six panels?” asked City Marketer Judy Yarbrough. “We had some pictures and used some books with history of some of the businesses, but the crown of our information came from local resident Hulene Blackwell Totten, who shared beautifully her first-hand experiences on The Block.”

The back of the murals includes history and other information about The Block.

Charles Hill, an artist from Martinsville, Va., painted the panels.

“It’s another Project DREAM art project and because it is located on the back side of town, it adds a mural to an area that did not have any artwork,” Yarbrough said. “It’s beautiful, but again it provides a section of our history that was not well known until now and captures a story that needs to be told.”

Reidsville native Catherine Wilson frequented many of the businesses that once were a part of The Block, including the Teenage Club, the Chicken Shack and the Food Room. What used to be Market Street was lined with businesses operated by Black business owners. Lucky Strike Grocery Store was also located on The Block, and owner Lester Gardner was known for extending credit to the Black community.

“He was a kind soul,” Wilson said.

On Saturdays, everyone came to town to shop in The Block, many often walking.

“This was our life,” Wilson said.

Other businesses which were staples of The Block and included in the mural project were the Chicken Shack, McLaurin Funeral Home, Yellow Flash Cab, Broadway Shoe Shine Parlor, the National Guard Armory and a beauty shop. In addition, the mural includes the first two African-American police officers in Reidsville and a set of quadruplets born in the city.

A founding member of the Old School Community Outreach Group, Wilson has held an annual festival on the old Block property for several years.

“One year I felt the spirit of God tell me it was time to rebirth The Block,” she said.

“We had nothing but a vision,” Wilson said.

Over time, more than $15,000 was raised through community help, and the mural project was started. Census and library research was done, but some of the most helpful information for the mural came from Wilson’s 94-year-old mother, Hulene Totten, who was raised in Reidsville and had kept a journal with insightful descriptions of The Block.

“The more I learned, the more I understood this was Black people’s lives,” Wilson said of The Block. “I knew this mural project was important because so many have forgotten or don’t realize that Reidsville wasn’t always like it is now.”

As the artist worked on drafts of the panels, he sent pictures to Wilson and the committee for feedback. Wilson shared many of the photos with her mother, too.

“He’d send us pictures, and we’d have to tell him to correct things, such as the beauty shop didn’t actually look like how he depicted it, and he’d make changes,” Wilson said. “We really had fun doing it.”

The mural is mounted on poles and includes a lengthy description on the back explaining the mural and the history of The Block. Since the mural was unveiled, Wilson said she has driven herself and her mother to see it again several times.

“I hope people might build on what we have all done,” Wilson said of the mural project. “The Block was very much a part of Reidsville and is an important part this city’s history.”

A house on Idol Street in Madison was destroyed by fire on Tuesday morning. According to firefighters, no one was injured in the blaze that co…

The infection trend comes as no surprise to health experts with colder weather sending more residents inside.

Local man dies after jumping from roof of Eden building

The 22-year-old apparently stepped off the roof of the century-old building at 619 Washington Street on Wednesday evening, authorities said.

EDEN — Two local residents have been arrested, and police here are seeking a third, Jaqueal Raquan Berger, 23, in connection to a shooting ear…

The Block Mural depicts what life was like in the Black-Owned Business District.

Catherine Wilson got emotional when she saw the final product.

Hulene Blackwell Totten was presented a plaque during the mural’s unveiling for sharing her journal entries and memories for the project.

Denise White, who helped with editing, and Catherine Wilson posed for a picture with the mural at the unveiling.

Catherine Wilson could not believe how well the finished product turned out.