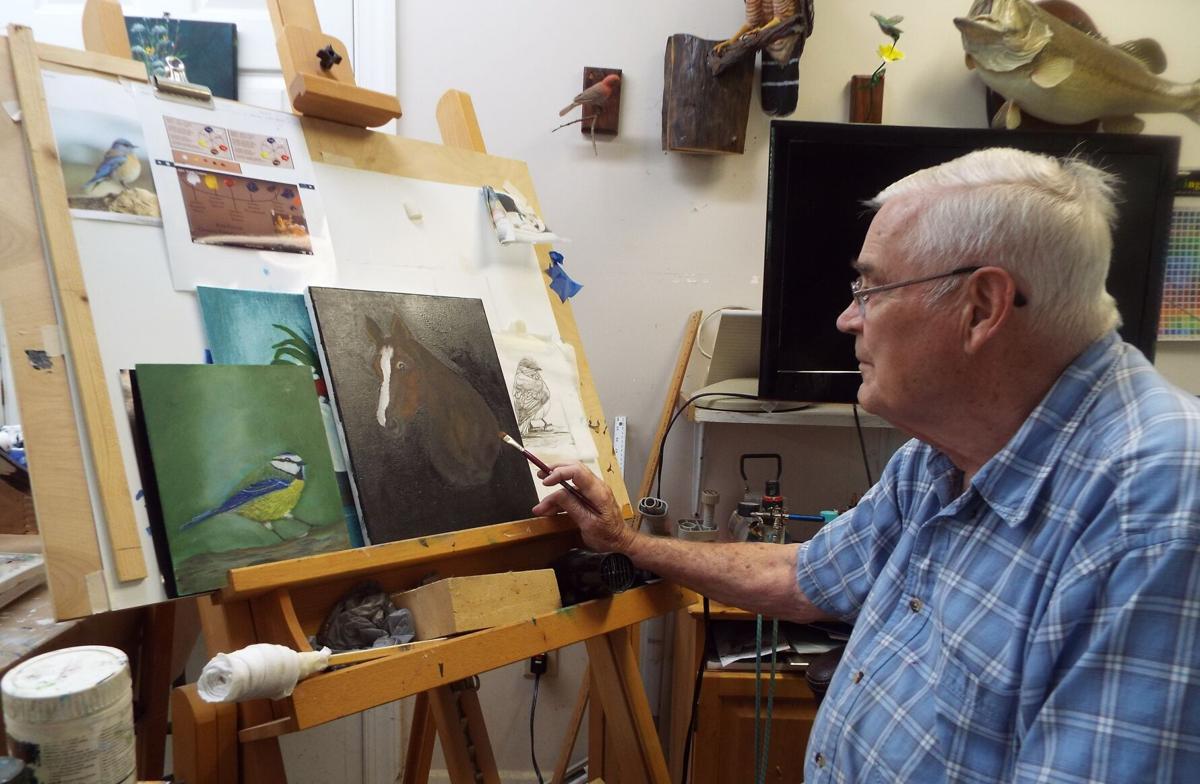 Penley spends time at his easel, painting the birds he plans to carve, then drafts patterns from which to cut the wood from which his sculptures will emerge. 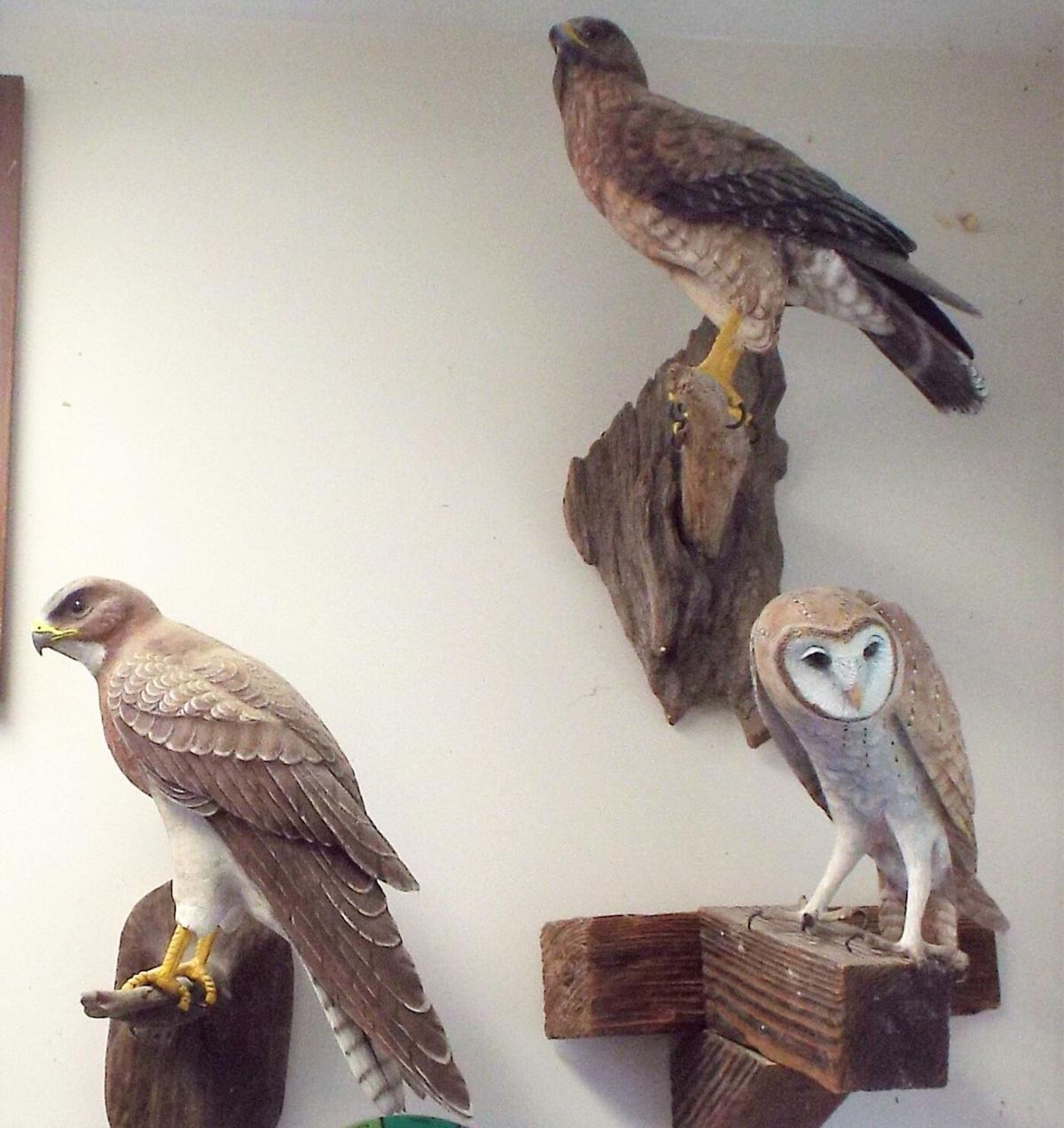 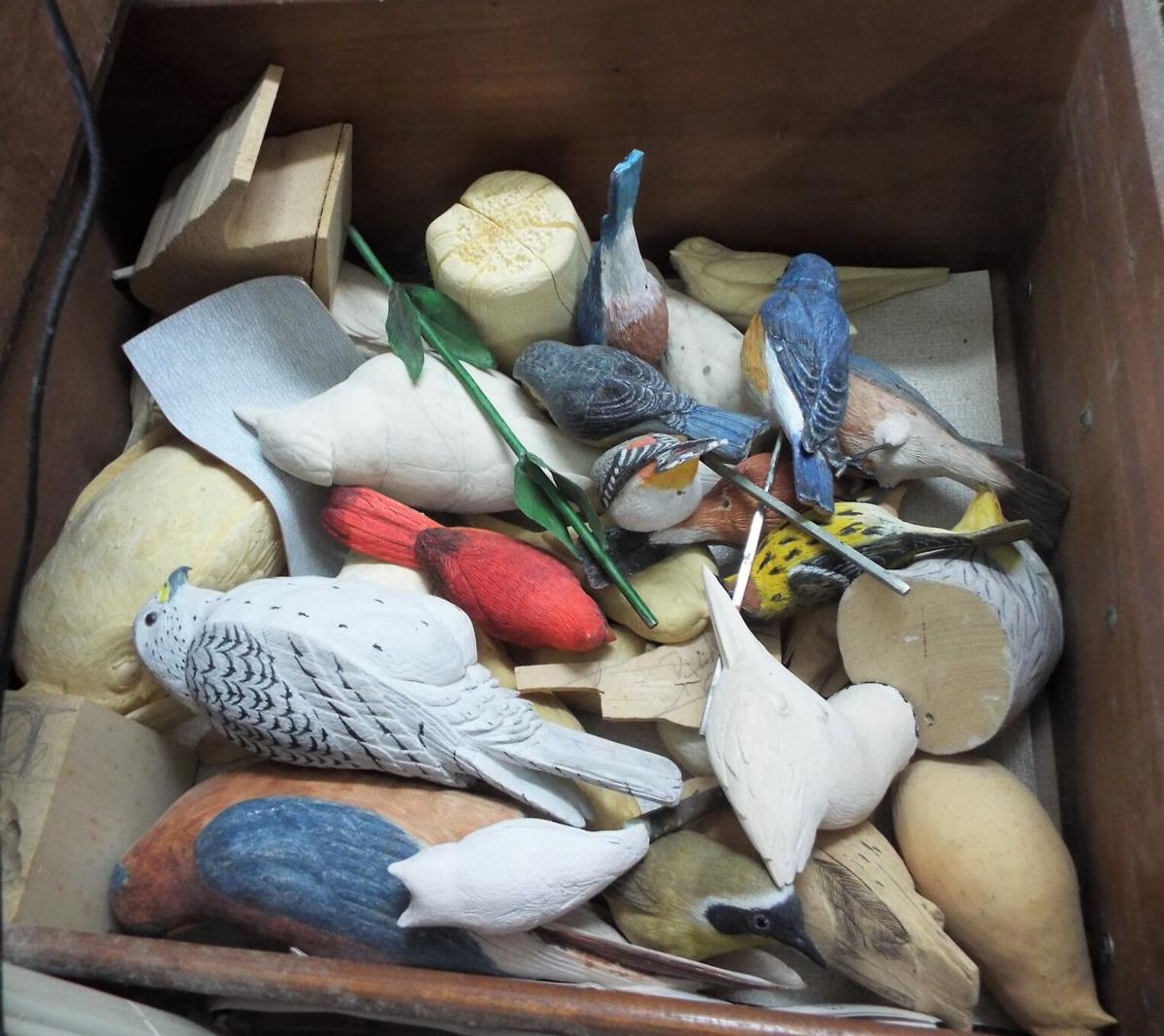 A workshop drawer holds carvings in various states of completion. Penley spends hours carving and painting his creations, a hobby he began after his retirement some 20 years back. 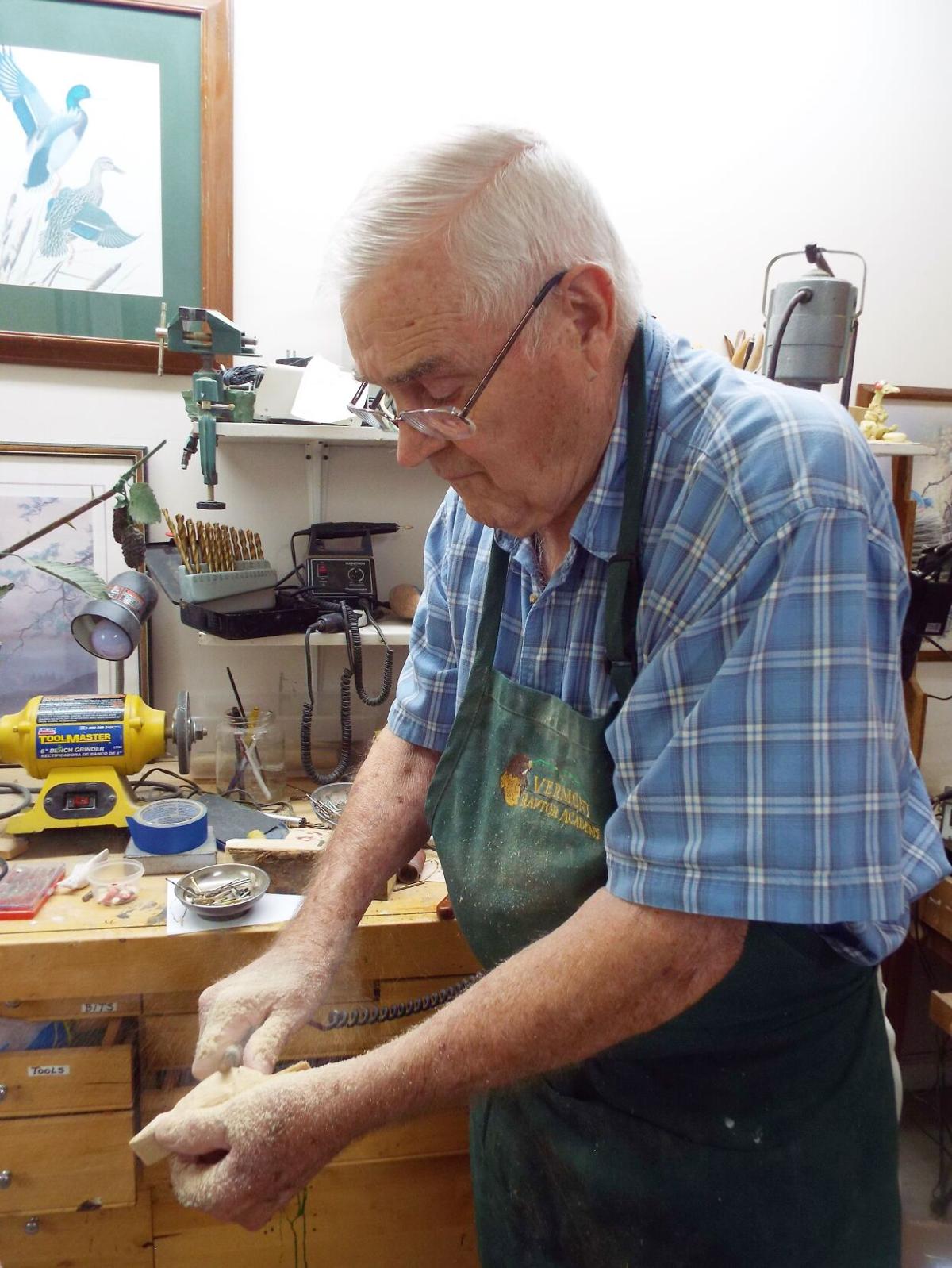 Bob Penley in his workshop, carving fierce raptors and delicate hummingbirds from wood. 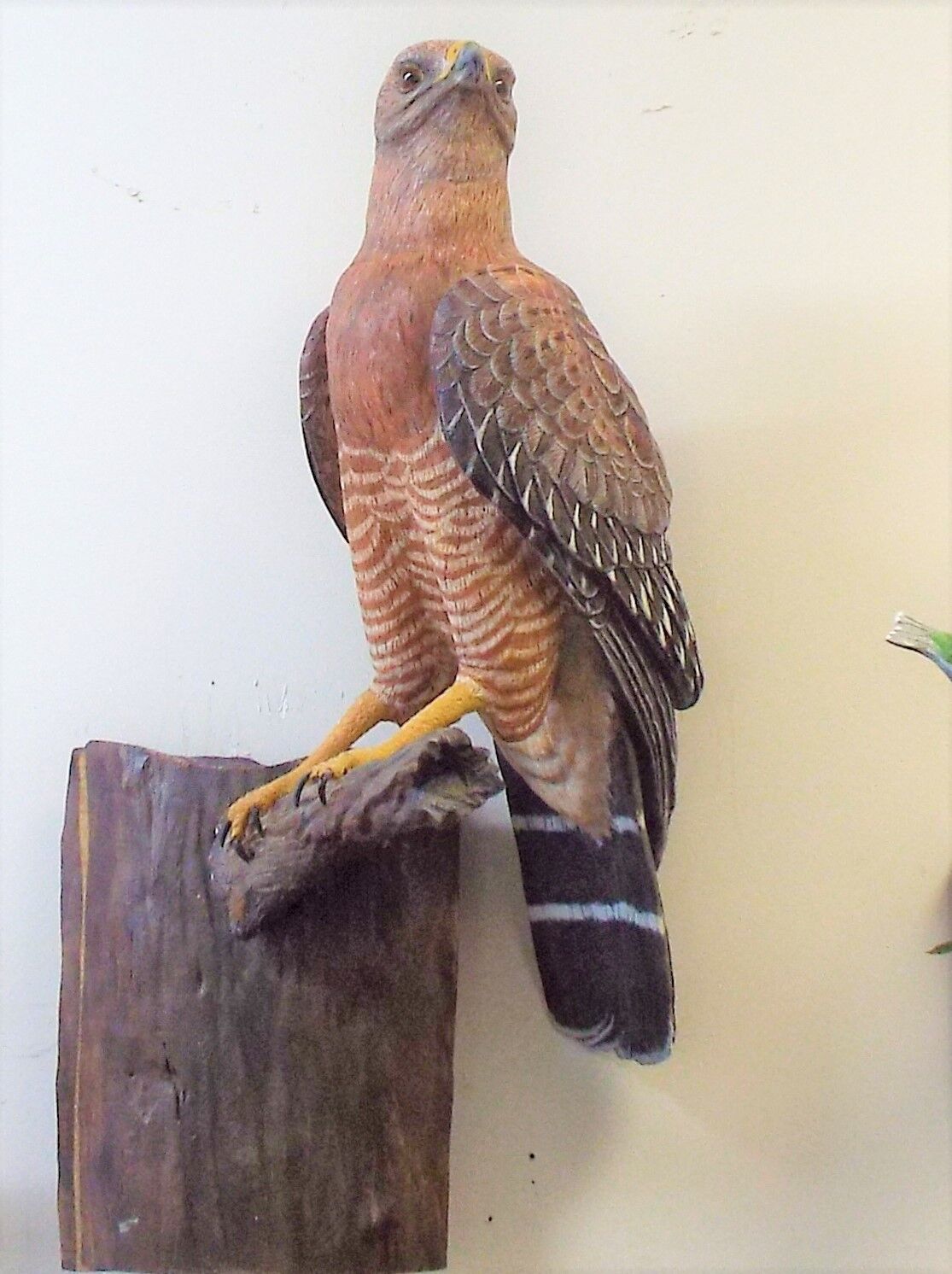 Artist Penley brings large birds of prey to life with his carving knives and paints. 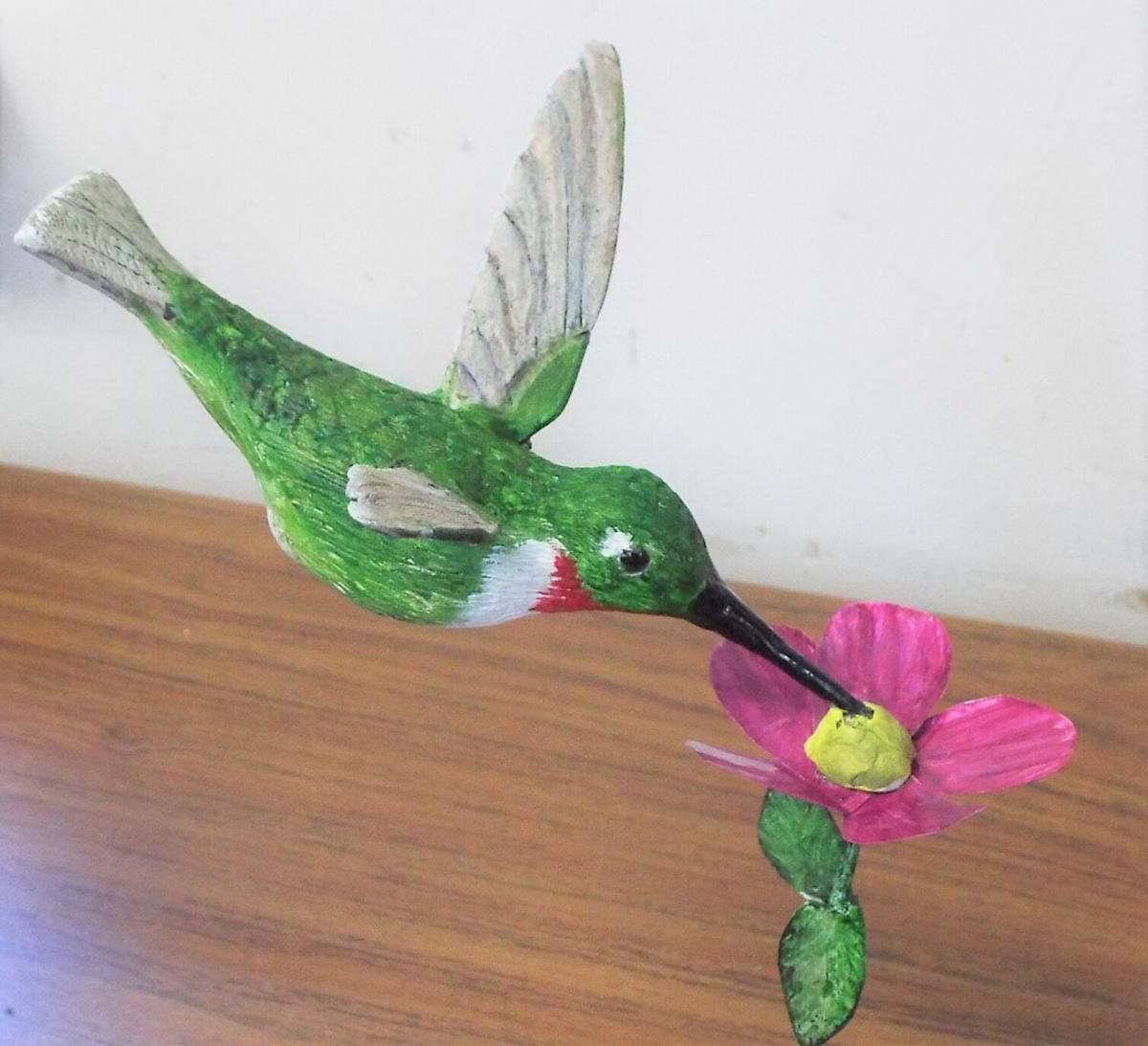 One of Penley's delicate hummingbirds, carved to appear in suspended animation, sipping from a carved flower.

About 20 years ago, Bob Penley ordered a cutout of a bird and a carving knife “and went to work.”

“It kind of looked like a bird when I got through,” he said, so he started creating more figures. “They kept improving as the years went on.”

Soon Penley decided to go to the World’s Competition in Ocean City, Md., where people come from all over the globe to display their woodcarvings. His entry was a miniature hawk, and it won an honorable mention ribbon.

“A ribbon from the World’s Competition is better than a blue ribbon from any organizations outside of that,” Penley said.

The Salisbury native kept getting ribbons, but has never won a first place.

“The competition was too big for that,” he said.

Over the years, Penley, 84, has taken some carving classes from the “very best in the world.” One instructor was Vermont’s Floyd Scholz, a master woodcarver. Penley, in fact, is seen several times in one of the Scholz’s school’s promotional videos.

“I figured if you’re going to do something, you need the very best instruction you can get,’’ Penley said.

Since that first endeavor, Penley has sculpted several hundred birds, including between 50-75 hummingbirds.

“They are very easy for me. I can just about do one in my sleep,” Penley said. “I can carve them without hardly thinking about it,” he said, noting it takes a day and a half to carve the delicate birds, including the painting and the flowers they are posed with.

Although he fashions some flowers from wood, he creates most of them from metal since wood is too fragile for the petals. He also carves many of the bases and/or branches on which he poses his bird creations. Look for his “signature” — a little ladybug on each finished piece.

Penley paints his own patterns. The birds are basically created life-size. Then the artist transfers his pattern to wood and cuts the rough outline with a bandsaw in his garage shop. The shop is filled with his work, including boxes of birds in various states of completion.

Penley admits the hardest part of the carving is the painting of the final piece.

“You can do a beautiful job on the carving and mess it up in five minutes with the paint,” Penley said, adding that he has taken some painting lessons to refine his talent.

“The first ones I took, my painting got worse,” he said with a laugh. “If you’re going to do anything, you need to have the best instructions you can afford.”

Occasionally, he sells his carvings, with prices ranging from $75 to $150. Some of the larger ones, fetch around $3,000 and are displayed in his shop.

As a child, Penley “did a little drawing.” His maternal grandparents had an easel made for him, and he drew pictures of trees and neighbors’ houses.

But art was basically a hobby for Penley, who would draw cartoons every once in a while.

After graduating in 1956 from Salisbury’s Spencer High School, Penley earned a two-year diploma in electrical engineering from North Carolina State University in Raleigh.

Eventually, he was employed by the electrical engineering department at Duke University to work on satellite power supplies through a grant with NASA. He stayed at Duke for about six years.

Penley next went to work for the Environmental Protection Agency in Research Triangle Park and Chapel Hill, where he was responsible for generating pollutants and monitoring the effects of the pollutants on humans.

In the mid-1980s, Penly and a friend began a business they named Trisotech, repairing computers for businesses in Durham. He retired in 2001 at age 65 because “I got tired of giving all the money to the government,” Penley said.

While in high school, he met his wife, Sarah Holt, and they married in 1958. They have a daughter Robin Small who lives in Winston-Salem with her twins, Tate and Kaley, 21.

In the early 2000s, Robin’s husband, Jeff House, bought Brown Bus Company on N.C. 14 here, and the Penleys built a home nearby so they could help care for the twins while their daughter and son-in-law built their business. Four years ago, the Penleys downsized to a home in the Indian Hills community.

Over the past two years, Penley has not done as much in his shop because of his wife’s medical problems.

Before she got sick, Penley said he “would go out in the shop and forget what time it was. I could carve all day long and enjoy it. You just kind of lose yourself in what you’re doing.”

Recently, Reidsville dermatologist John Hall commissioned Penley to carve a pileated woodpecker, and “that kind of got me started back a little.”

Durham-based photographer Kennedi Carter in December earned the distinction at the age of 21 of being the youngest photographer to shoot a cover for Vogue of superstar singer Beyoncé. She was attending UNCG at the time, but no longer takes classes there.

'Scary, definitely scary.' Employee in custody after manager is shot inside Danville store.

MADISON — The Sharpe and Smith Tobacco Warehouse here heard the sing-song calls of tobacco auctioneers for nearly a century.

THOMASVILLE – When she was a child, Karen Younts Griffin would visit the home of her aunt Peggy and her late uncle Wilford Radford, who lived …

"A lot of people have a lot of great memories of him," his niece, Jennifer Hippert, said. "He was definitely like an icon in the community."

Penley spends time at his easel, painting the birds he plans to carve, then drafts patterns from which to cut the wood from which his sculptures will emerge.

A workshop drawer holds carvings in various states of completion. Penley spends hours carving and painting his creations, a hobby he began after his retirement some 20 years back.

Bob Penley in his workshop, carving fierce raptors and delicate hummingbirds from wood.

Artist Penley brings large birds of prey to life with his carving knives and paints.

One of Penley's delicate hummingbirds, carved to appear in suspended animation, sipping from a carved flower.