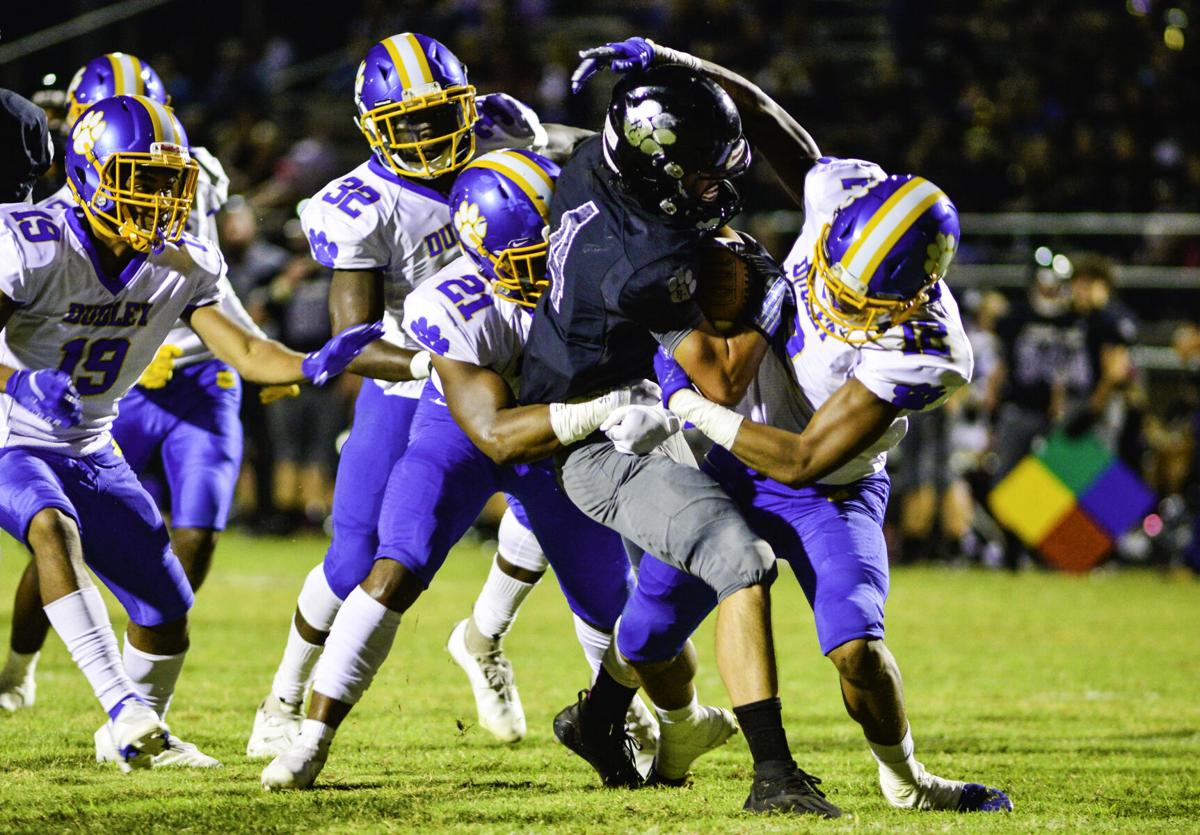 Rockingham wide receiver Ethan Smith is wrapped up by several Dudley defenders in the Panthers 62-0 win over the Cougars Oct. 16. 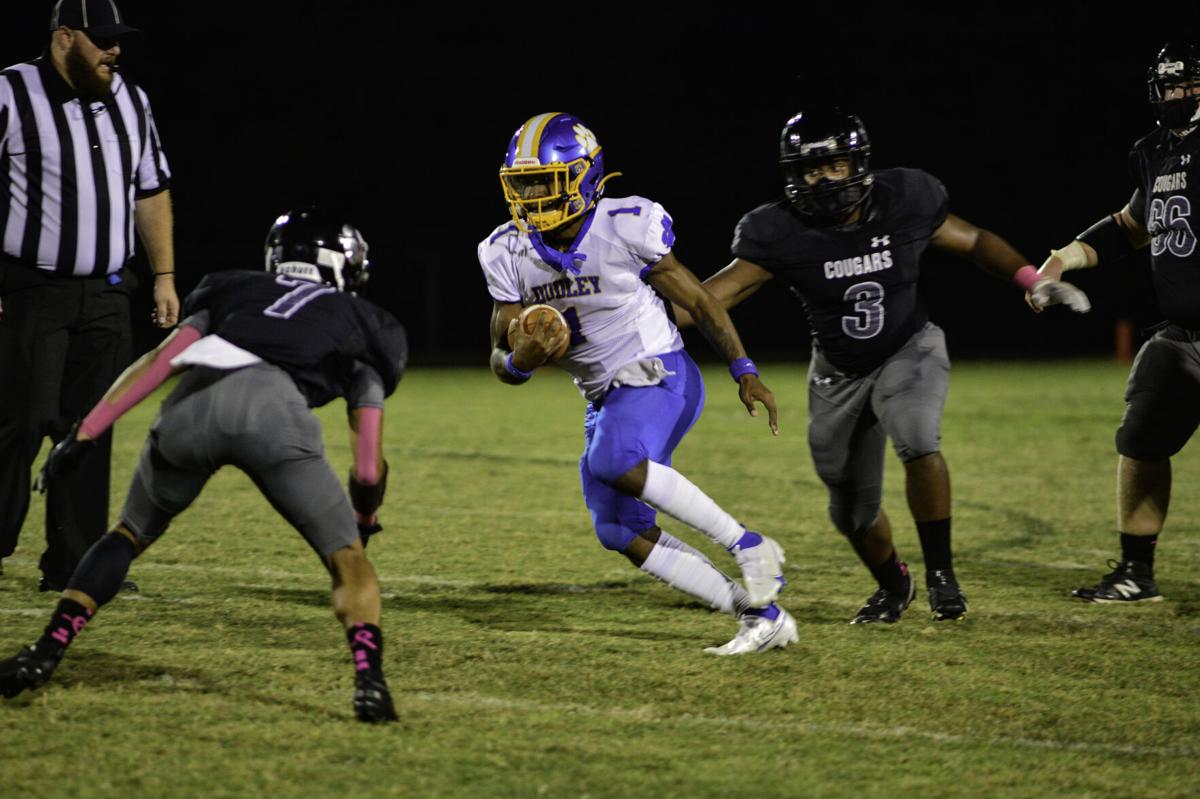 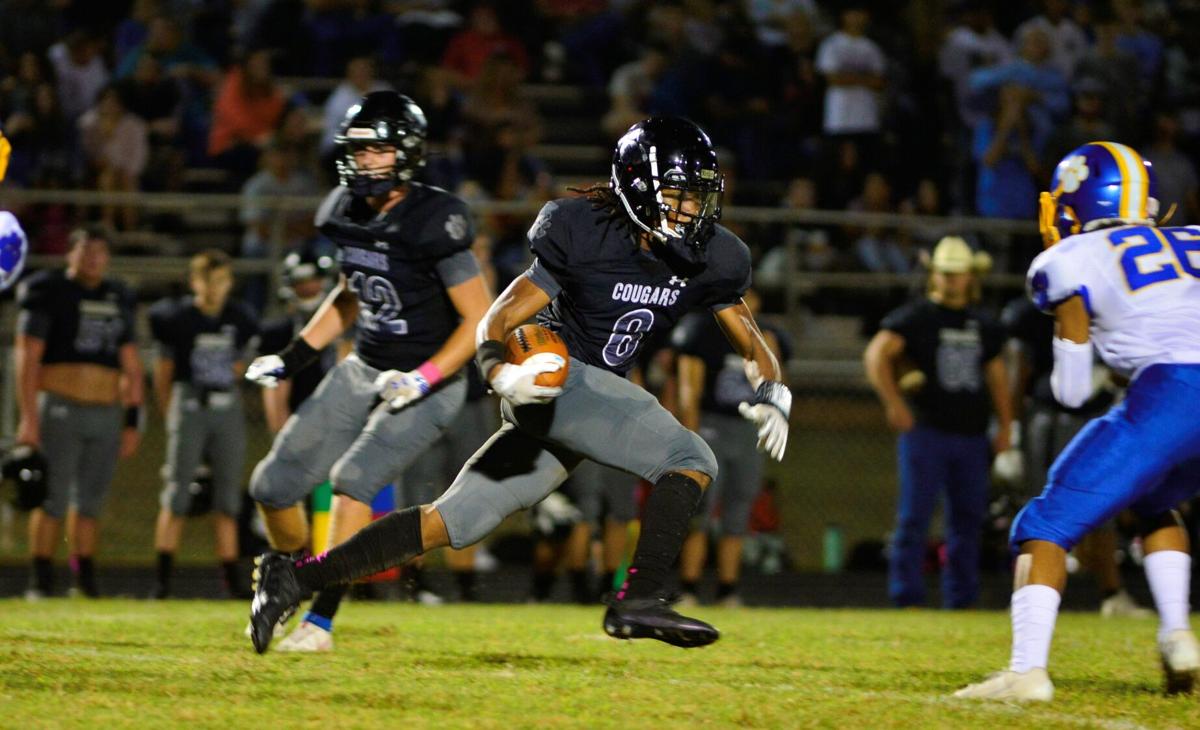 Maleek Bryant makes a cut for a gain in the second half at home versus Mid-State 3A Conference foe Dudley.

WENTWORTH — Dudley came as advertised, taking control of the game early and rolling to a dominant 62-0 Mid-State 3A Conference victory over Rockingham Friday night at Cougar Pride Stadium.

The Panthers took advantage of good field position on their opening three drives to race to a 21-0 lead at just over the midway point of the opening frame.

That trend continued at the beginning of the second quarter as a Rockingham was forced to punt once again from deep inside their own territory which set Dudley up at the RCHS 47 yard line. Three plays later, Michael Shaw broke free to score from 27 yards out to increase the advantage to 28-0.

Three more touchdowns followed with the pass, on the run as well as special teams to account for a 46-0 advantage at the half.

Even though the game was no longer in doubt, and the running clock was all set to begin in the third quarter, Dudley added two more second half scores to account for the final margin of victory.

The Panthers are most certainly getting better with age this season. They entered the game red-hot riding a four-game winning streak since their 30-14 loss to Hillside Sept. 3. Dudley has averaged nearly 63 points per contest in their last five games.

Every team has holes to fill in the roster at the beginning of a new season, but at Reidsville, the most obvious place to start is at point gu…

EDEN — The Morehead basketball team’s methodical defensive press combined with timely scoring built a comfortable cushion, but it was a third …

EDEN — In a game that was never in doubt, Rockingham improved to 4-0 following an impressive 55-8 victory over cross-county rival Morehead to …

One of the four games at the Greensboro Coliseum Special Events Center matches NCISAA rivals Greensboro Day and Wesleyan.

2021 Mid-State 2A All Conference Fall Sports

The following student-athletes were named the the 2021 Mid-Sate 2A All Conference teams for fall sports:

CHAPEL HILL – The North Carolina football team has been selected to play in the 2021 Duke’s Mayo Bowl against South Carolina. The Tar Heels wi…

Rockingham wide receiver Ethan Smith is wrapped up by several Dudley defenders in the Panthers 62-0 win over the Cougars Oct. 16.

Maleek Bryant makes a cut for a gain in the second half at home versus Mid-State 3A Conference foe Dudley.