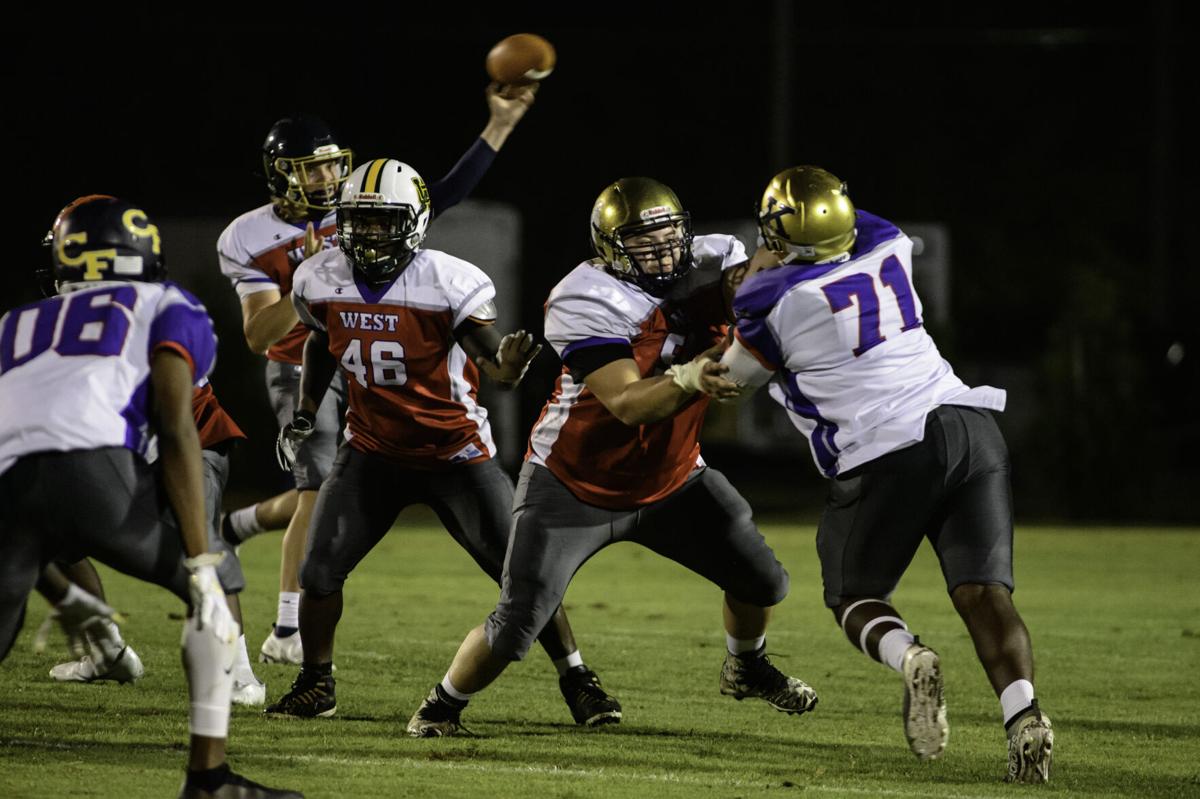 Former Rams tackle Isaiah Mosqueda (second from right) who graduated from high school earlier this year, was a participant at the annual NCFCA East-West All Star football game July 21. 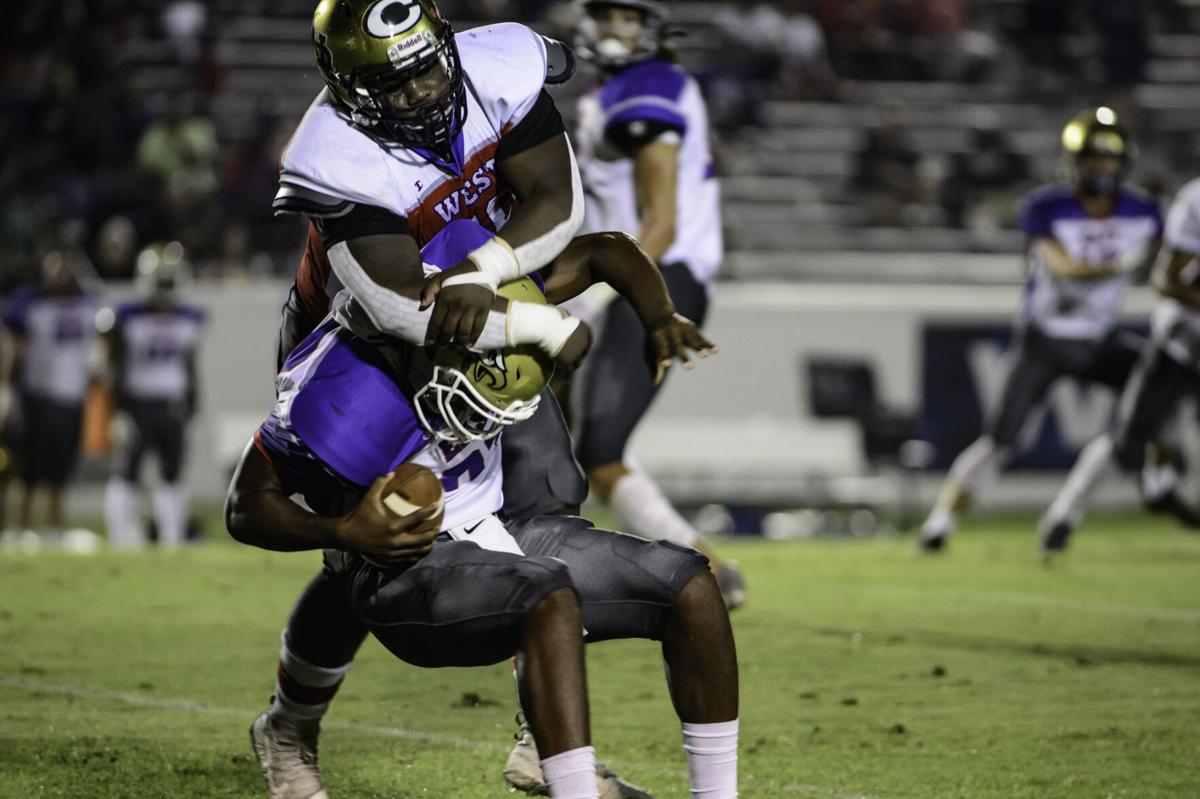 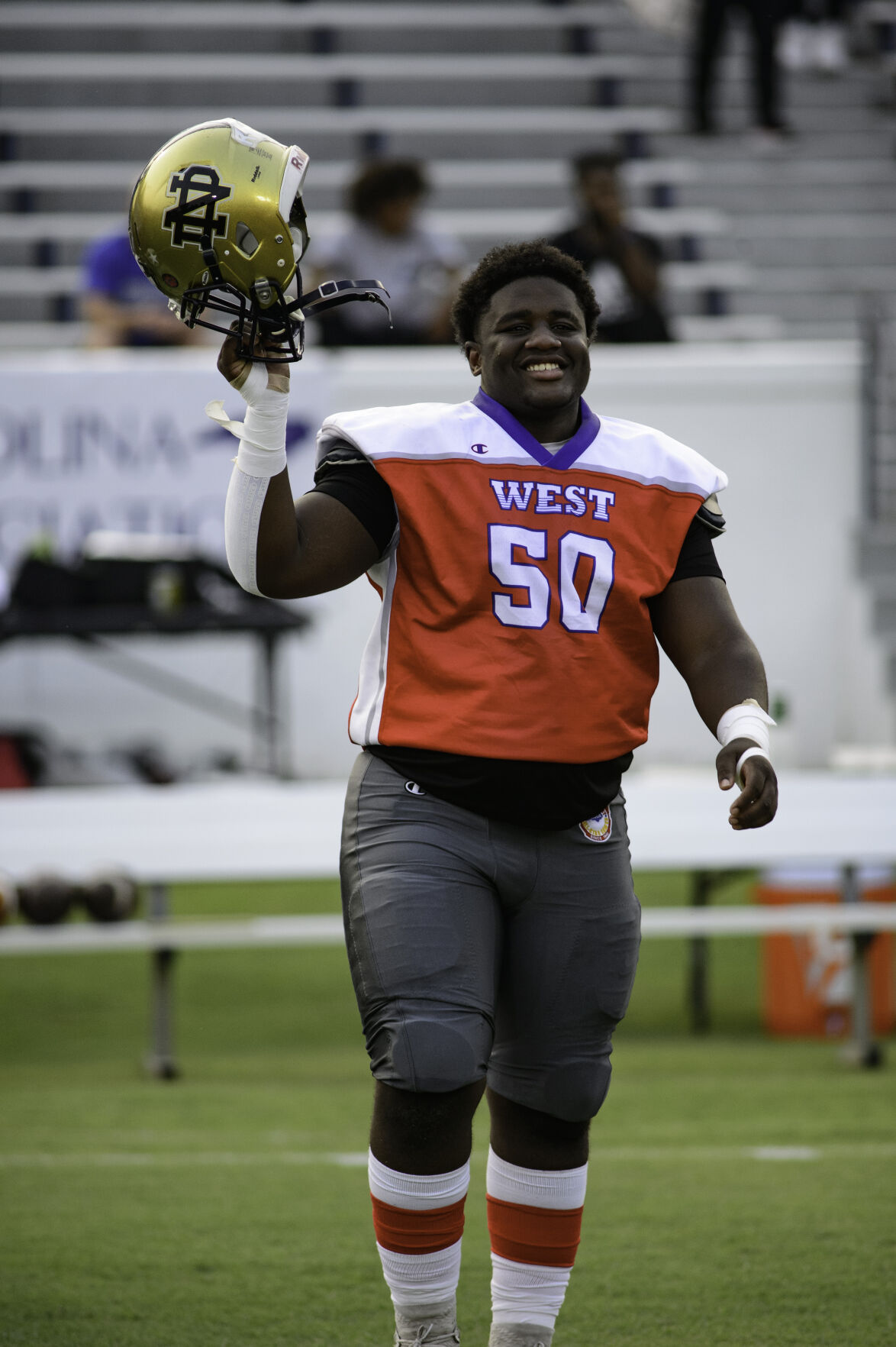 2021 2A NCHSAA State Championship player Ki Rankin waves to the crowd as he took the field in his final high school performance July 21. 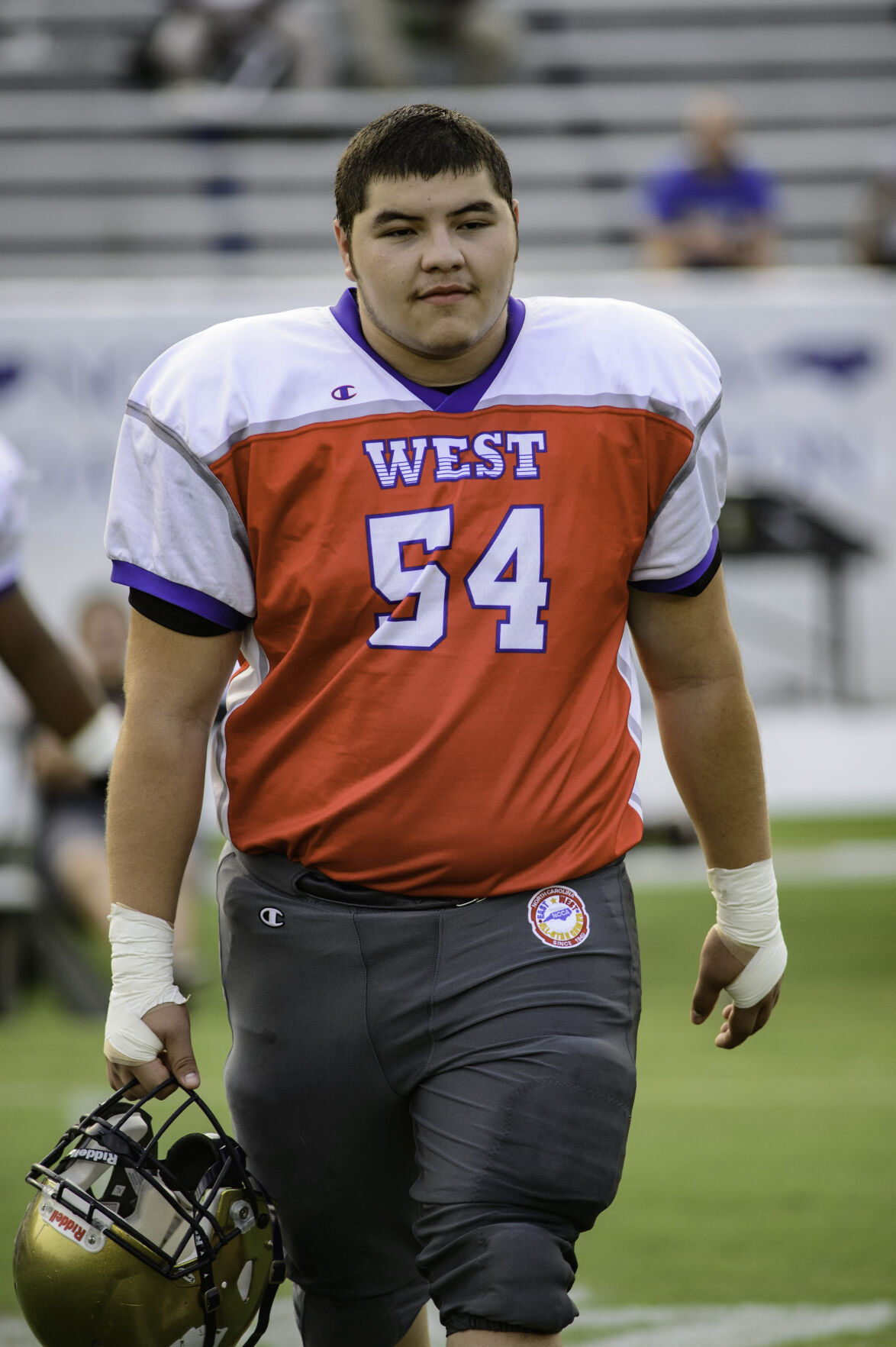 RHS’s Isaiah Mosqueda is introduced to the crowd prior to the 2021 All-Star game. 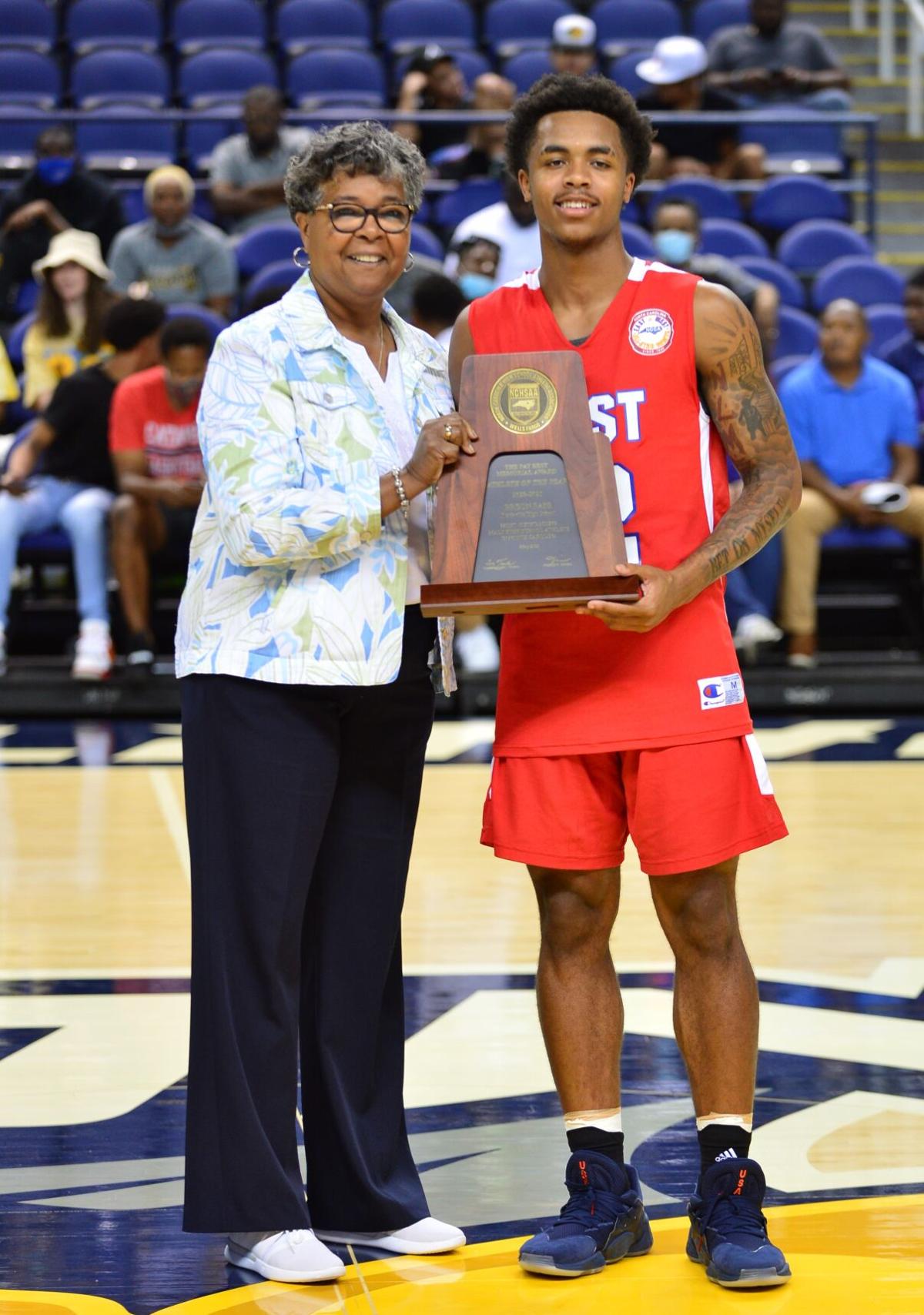 During a halftime ceremony at the East-West All Star game, former Reidsville point guard Breon Pass was presented with the NCHSAA Male Athlete of the Year Award by Commissioner Que Tucker. 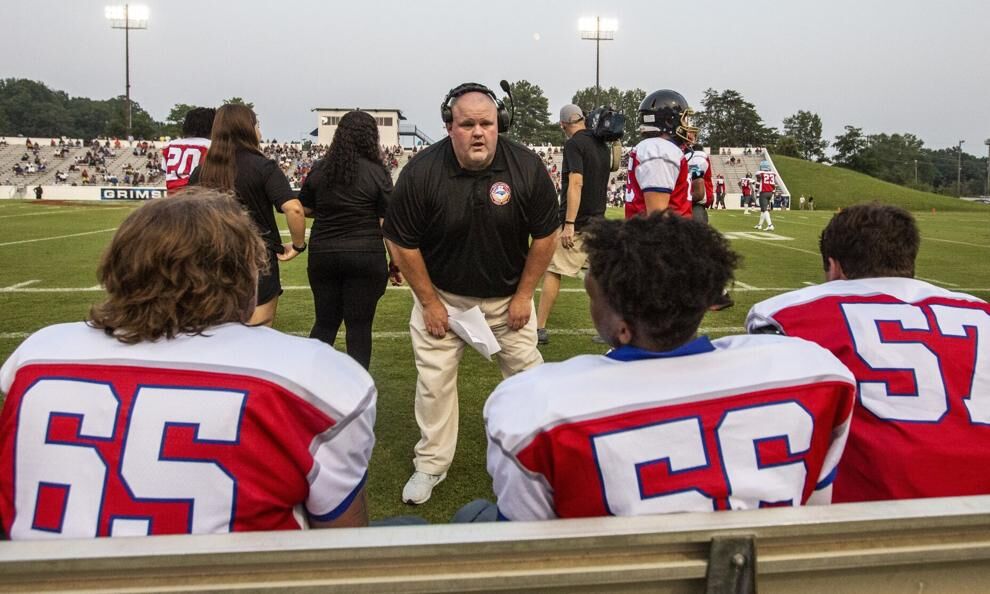 Two of just 36 elite members selected to play for the West team, Mosqueda and Rankin, were key contributors for the Reidsville program which won the last three Class 2-A NCHSAA State Championships.

The West All-Stars won a grinder of a game Wednesday night by a 7-0 margin courtesy of a 1-yard third quarter touchdown by former Eastern Guilford player Hezeikia Newby.

Courtesy of solid play defensively by both teams, yards were tough to come by throughout the game. The East held the edge with 85 yards total rushing as compared to 42 by the West squad.

Defenders spent the majority of the night in the opposition’s backfield. The East had 55 rushing yards for losses and similarly, the East had 44.

The West held a slight edge in the passing game with 157 yards as opposed to 120 by the East, but strong play in the secondary by both teams didn’t allow a single reception for a score all night.

Rankin picked right up where he left off in the regular season with four tackles, three for a loss, including one sack at the All-Star game.

The 6-0, 245 pound defensive lineman had 71 tackles (26 for a loss) as a senior at RHS. The Mid-State Class 2-A All-Conference and All-Region selection also received the Rams Outstanding Defensive Lineman Award. He was an All-Conference player three consecutive seasons and a former Reidsville MVP Award recipient.

Rankin is a member of the PGC Mentor Club and was a four-year honor roll student. He is taking his gridiron game to Winston-Salem State University where he plans to major in criminal justice and is considering a career with the federal government after graduation.

“It is an honor being picked to play this game and I am very excited to play with other players around North Carolina. I am expecting to gain knowledge from participating in this game,” said Rankin prior to the kickoff.

In addition, Rankin was one of the top high school wrestlers in the state and a multi-time post season qualifier.

Mosqueda, a 6-foot-2, 299-pound offensive lineman, received the Rams Hammer Award three-straight seasons. The Mid-State Class 2-A All-Conference selection will continue his playing career at Greensboro College this fall, where he plans to major in business. He aspires to play in the NFL after graduation.

“I feel honored. I was not expecting this, but I am truly grateful for this opportunity. I want to gain more experience from coaches and staff to better my playing skills and experience,” Mosqueda said in an interview with the NCFCA prior to the game.

Robertson, who is entering his second season at Page, currently has a 102-50 record in 12 seasons as a high school head football coach. Over the years, his teams have won three conference championships and made 10 state playoff appearances, winning one state title at Reidsville in 2009. He also guided Eastern Guilford to the state finals in 2016.

He has been named conference coach of the year three times and also coached track over the course of his career.

Robertson got his start playing offensive tackle and later became an assistant for Reidsville head coach Jimmy Teague. The former All-Conference player graduated from RHS in 1995 and went on to play at Guilford College. Robertson later received his master’s degree from Delta State University before getting into coaching.

“It’s an honor and a privilege to be named the head coach of the West All-Stars. As a high school football player in North Carolina, I had always aspired to compete in this game, but never had the opportunity. Now, being named the head coach, the Lord has blessed me with being a part of this prestigious game. My staff and I have worked hard to find, and look forward to coaching, the very best players in the western part of the state to represent our sport well,” the coach said in an interview with the NCFCA prior to kickoff.

The East-West All-Star Games were founded in 1949 by Coach Bob Jamieson of Grimsley High School and Smith Barrier, the sports editor of the Greensboro Daily News, to help finance the North Carolina Coaches Association coaching clinic. The games feature the best from the Eastern half of North Carolina against the best from the West players who have just graduated from high school. Coach Jamieson served as the Director of All-Star Games from 1949 until 1986. Upon his retirement, his protégé, Phil Weaver, assumed the director’s position. The inaugural game was played in the 11,000 seat Jamieson Stadium at Greensboro Senior High School (now Grimsley High School).

Origins section is courtesy of nccoach.org.

Terquavion Smith scores 30 points to lead the East to a 116-92 win over Breon Pass and the West, but "it's all love," Smith says.

For most people, the often overwhelming July heat means a lot of different things including summer cookouts and trips to the swimming pool. Bu…

NC State fourth-year linebacker Payton Wilson has been named to the watch list for the 27th annual Chuck Bednarik Award, which is presented to…

Former Rams tackle Isaiah Mosqueda (second from right) who graduated from high school earlier this year, was a participant at the annual NCFCA East-West All Star football game July 21.

2021 2A NCHSAA State Championship player Ki Rankin waves to the crowd as he took the field in his final high school performance July 21.

RHS’s Isaiah Mosqueda is introduced to the crowd prior to the 2021 All-Star game.

During a halftime ceremony at the East-West All Star game, former Reidsville point guard Breon Pass was presented with the NCHSAA Male Athlete of the Year Award by Commissioner Que Tucker. 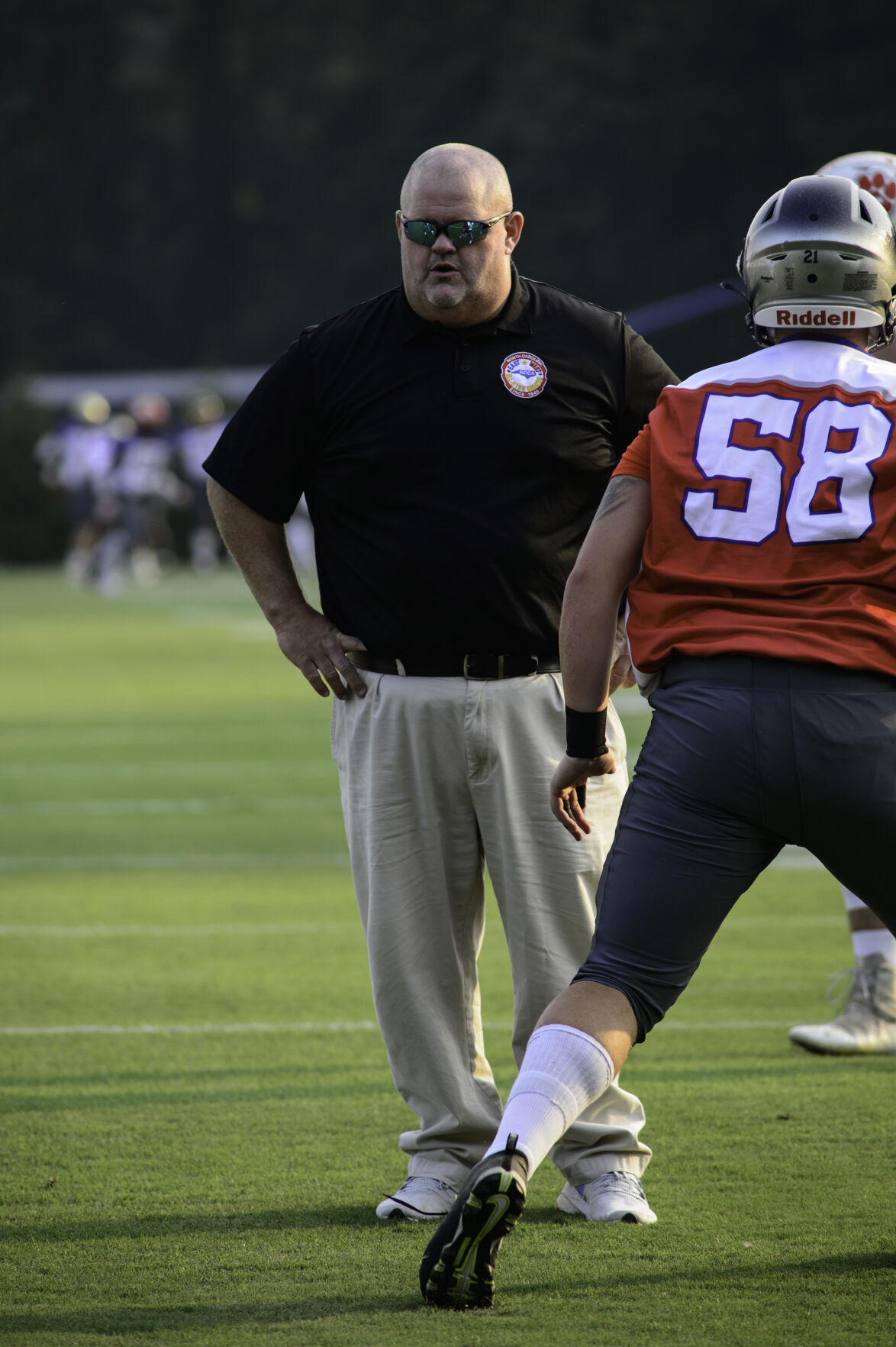