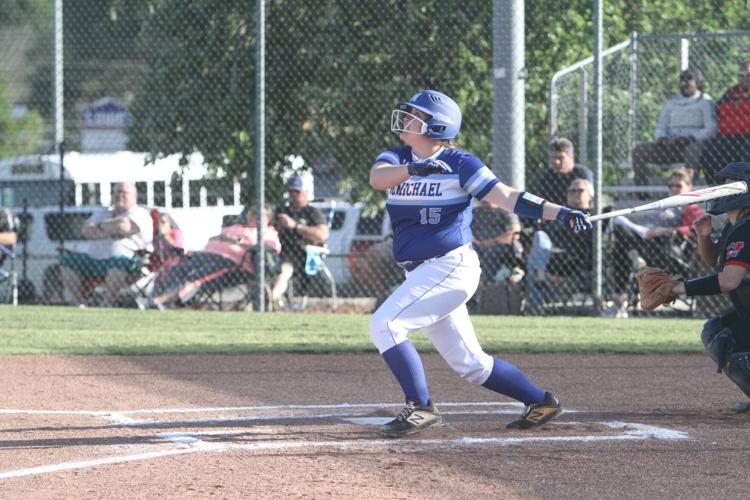 McMichael’s Haley Joyce connects for an RBI in her team’s 12-1 win over Walkertown in the first round of the 2022 2A NCHSAA state playoffs Tuesday. 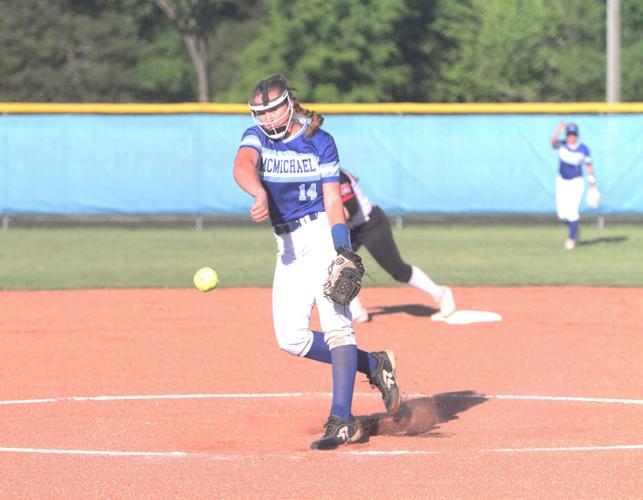 DMHS pitcher Dakota Redmon fires up a pitch in the first round of the post season May 10.

After two scoreless innings, the Phoenix had a breakout frame in the top of the third, plating four runs for the 4-0 advantage. But the Falcons answered emphatically tying the score at 4-4 in the bottom of the inning.

Forbush took the 5-4 lead with a score in the fifth, but McMichael tied the game once again at 5-5 in the sixth.

The Phoenix bats came alive, scoring a pair of runs in the top of the seventh for the lead, and then the McMichael defense held strong in the bottom of the frame to lock up the win and punch a ticket to the third round next week.

Savannah Lockhart led the charge offensively with a pair of hits and four RBIs. Haley Joyce had a strong night as well with a two-RBI shot. Others Phoenix players with hits include Makenna Stewart, Jada Johnson, Bradyn Case and Anna Casto.

Redmon picked up the win in 6.2 innings pitched on a night where she struck out five and walked just one.

The Phoenix split with the Wildcats in regular season play in two intense games. West Stokes won the first match-up 2-1 March 15 and McMichael picked up the 5-3 victory April 25.

The Wildcats defeated No. 12 Southwestern Randolph in the second round by a 2-1 margin to earn their spot versus the Phoenix.

MAYODAN — McMichael head softball coach Bob Casto said beating a team three times in the year is always a tall order before the beginning the Phoenix’ home game versus Walkertown in the first round of the 2022 2A NCHSAA state playoffs Tuesday.

But when all was said and done, DMHS made the rubber match look easy as they put another complete game together and cruised to an impressive 12-1 win over the Lady Wolfpack in first round post season action May 10.

“I’m really proud of them. Everybody was swinging the bat well and we hadn’t been hitting that good recently when we had runners in scoring position. Hopefully we cured that tonight and it will carry over to the next round,” said Casto.

McMichael’s Haley Joyce got the scoring started with an RBI single in the bottom of the opening frame, then a throwing error in the field sent another runner across the plate for a 2-0 lead.

In the second inning, Anna Casto hit a shot down the third base line that bounced off the Walkertown infielder’s glove that resulted in another score.

But then things really to a turn for the worst for the Lady Wolfpack in the third where McMichael really heated up in the batter’s box as they kept a steady train of runners moving around the bases for scores as they plated nine more runs.

Joyce led the charge offensively with a pair of hits and four RBIs. Casto had a strong night with a hit and plated a pair of runs and Savannah Lockhart garnered a hit and added a pair of RBIs as well.

Redmon picked up the win in five innings pitched. She walked two, gave up four hits and struck out six Walkertown batters.

The Lady Phoenix defeated Walkertown (15-9), a Mid-State 2A Conference foe twice during the regular season. McMichael won the first game 15-5 March 29 then again by a 6-4 margin April 22.

Casto said even though the stakes are high in a one-and-done tournament, McMichael will stay the course that has gotten the team to where they are now.

Rockingham makes history, earning a trip to third round of state playoffs

East Rutherford takes out Morehead in second round of post season

FOREST CITY — Morehead’s strong season came to an end on the road as East Rutherford put together a solid game, with the bat and on defense, t…

She succeeds Rachel Clark, who stepped down in March.

The former Northern Guilford and N.C. State standout was a second-round pick in the WNBA draft.

High Point Central’s Davis DeLille tied for medalist honors, but came up short in a four-way playoff for the title Tuesday in the NCHSAA Class…

McMichael’s Haley Joyce connects for an RBI in her team’s 12-1 win over Walkertown in the first round of the 2022 2A NCHSAA state playoffs Tuesday.

DMHS pitcher Dakota Redmon fires up a pitch in the first round of the post season May 10.