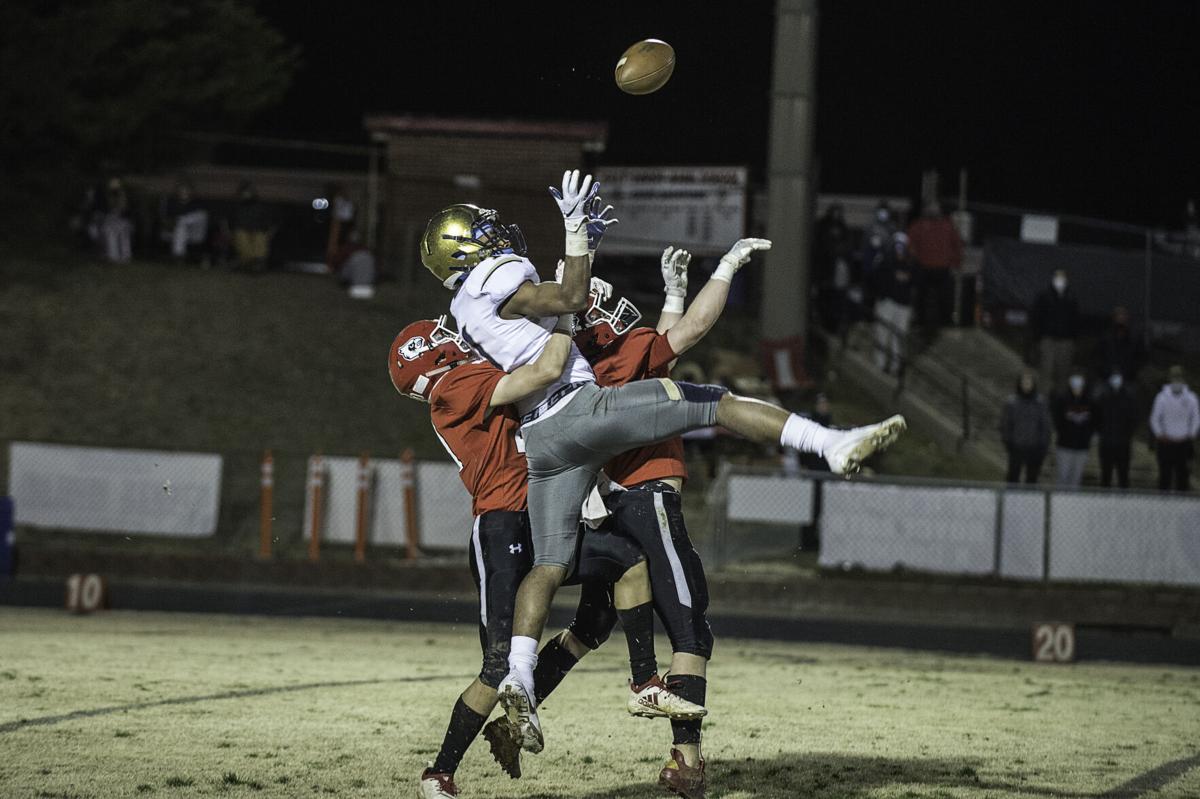 RHS senior Breon Pass goes up for a reception in traffic versus the Cardinals in the season opener March 5. 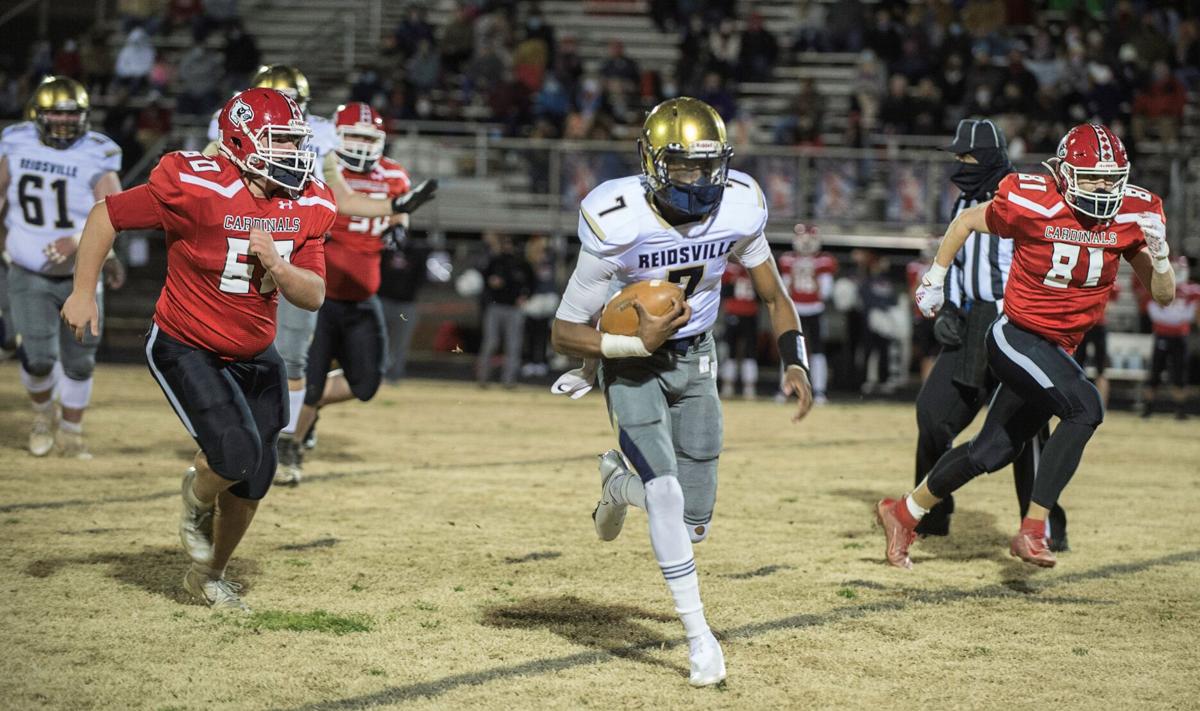 Reidsville senior quarterback Kyle Pinnix breaks into the open for a touchdown in the Rams' 48-14 win at East Surry on Friday night. 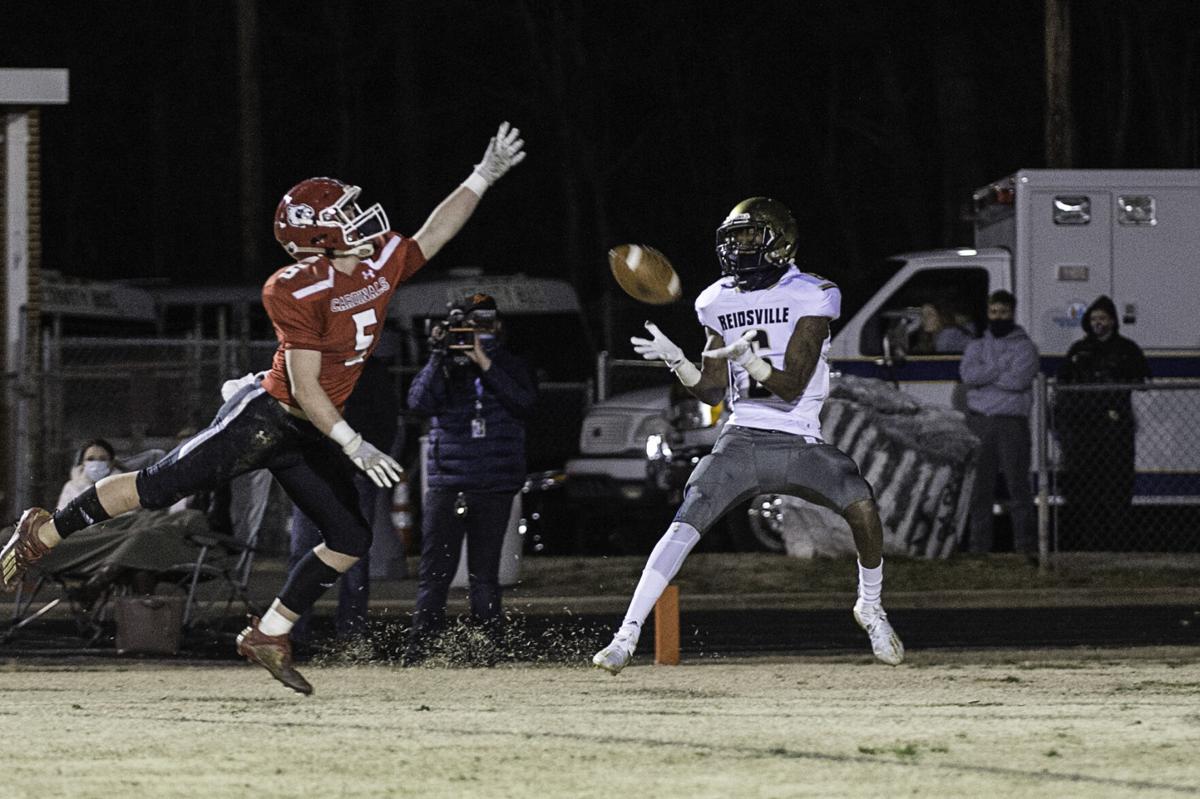 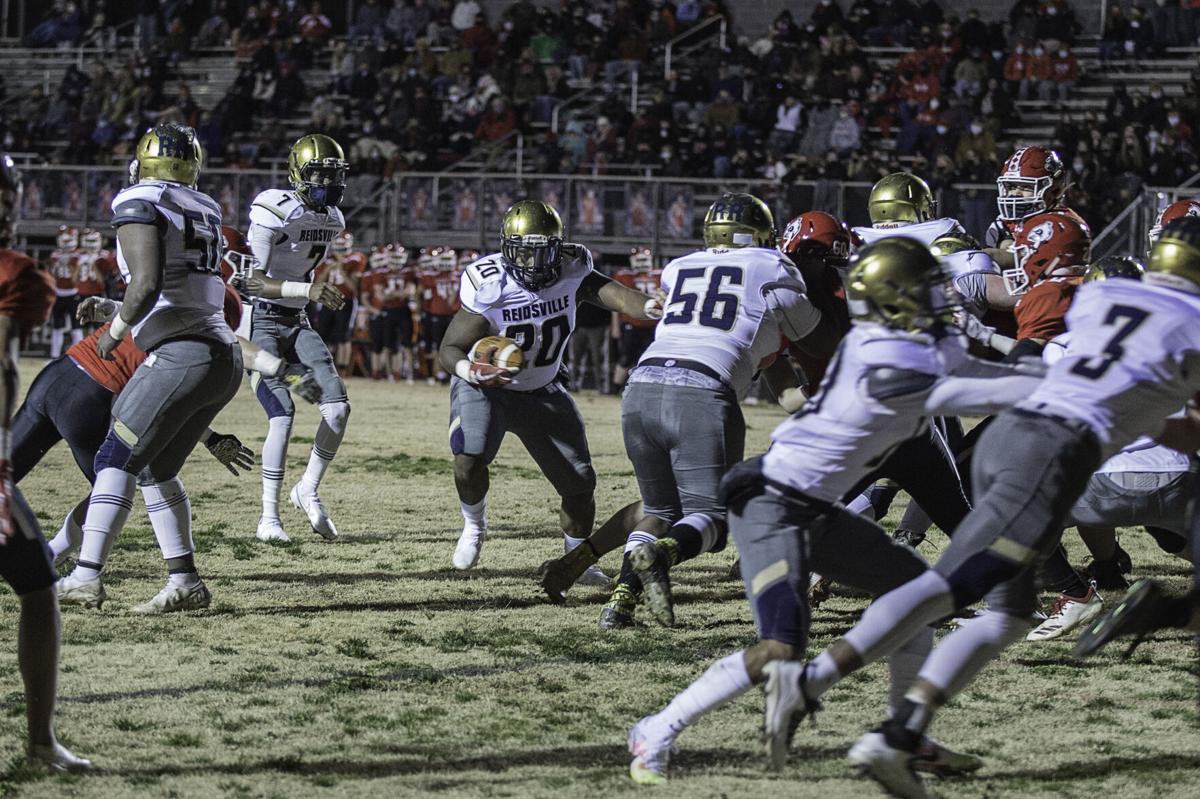 Rams running back Stevion Harrison makes a cut back to a hole created by No. 50 senior Ki Rankin and No. 56 sophomore Nashaun Price in Reidsville’s first game of the 2021 season on the road versus the Cardinals.

PILOT MOUNTAIN – The return of high school football in the region has been a long time coming for the defending 2019 2A NCHSAA state championship Reidsville team, but Friday night marked an impressive return to the gridiron as the Rams opened their 2021 season with an impressive 48-14 win over East Surry Friday night.

After having their scheduled season opener at Thomasville cancelled due a COVID outbreak in the Bulldogs’ locker room prior to the scheduled Feb. 12 game, Reidsville actually was able to hit the field at full strength with more than half a dozen key members of the Rams Sweet 16 playoff basketball team back in pads.

Rams head coach Jimmy Teague said he was happy to have his entire roster dressed out and on the field, but just because they were on the field, didn’t mean they were completely prepared to compete at the level to which they are accustomed due to limited reps.

“I’m sure they will tell you the same thing. They are not actually in football shape. It’s different, no matter how good of shape that you are in. Basketball, obviously they are in shape, but it doesn’t really matter of how good of shape that you are in. It’s different when you put the pads on. It’s going to be another couple of weeks before they really get back into full swing, but it was definitely good to have them back out there. We told them on Monday that we were really pulling for them and what a great thing it would have been if they could have won a basketball championship. It’s unfortunate that they didn’t, but we were glad to have them back out,” said Teague.

Even though there was a little rust showing on both sides of the ball, Reidsville more than made up for the 55-49 shootout loss to the Cardinals they suffered the last time the two teams met on Sept. 27, 2019. RHS would go on to close out that season as the state champions with the only blemish on their record being the loss to East Surry.

Both teams had a little trouble in the early going, bobbling snaps on punts which led to short fields, but eventually Reidsville was able to capitalize and pull away.

Once the Rams shook off the cobwebs, they built a 21-0 lead, all aided by good field position.

Reidsville did most of the damage in the first half as they pulled ahead with a commanding 35-7 advantage.

The only Cardinals score was mainly due to a good field position, but other than that one score, and one more late East Surry touchdown, the Rams defense was stingy for the majority of the night.

Some of the highlight’s included both a passing and rushing scores from RHS senior quarterback Kyle Pinnix. In addition, he threw a short screen to fellow senior Breon Pass on the wing and then the receiver was able to weave through traffic, turn on the speed, and race for a score from about 40 yards out. Pass, who also plays cornerback, played well on defense as well hauling in an interception. Stevian Harrison scored on a rushing touchdown, as did Jaden Robinson on a nice reception at the doorstep of the goal line that resulted in a touchdown.

In addition, special teams play was huge on the night with kicker Anthony Franson hitting a pair of fourth quarter field goals, and Rams return specialist Cam Peoples scored on an impressive 91 yard kick return. Reidsville had 289 total yards of total offense compared to just 71 for East Surry. Pinnix rushed for 57 yards and was 14 for 21 passing for a 178 yards and two passing TDs. Pass had seven receptions for 100 yards and the one score. Defensively, Ki Rankin and Omarian Pettiford led the team in tackles.

Teague said despite the victory, the Rams still have plenty of work to do if they want to compete for another championship.

“Obviously we are happy to come away with the win and we did some good things, but there is a lot we have to improve on if we are going to be a contender when it gets to playing in the conference,” said Teague.

East Surry (1-1) will hit the road to face Bishop McGuinness next Friday with a 7:30 p.m. kick scheduled.

Dan Wiederer: Aaron Rodgers is as good as gone from Packers. Suddenly Bears might have best QB situation in NFC North.

Scott Fowler: Roy Williams laughs off another bogey. This is retirement, and he’s loving it. (copy)

RHS senior Breon Pass goes up for a reception in traffic versus the Cardinals in the season opener March 5.

Reidsville senior quarterback Kyle Pinnix breaks into the open for a touchdown in the Rams' 48-14 win at East Surry on Friday night.

Rams running back Stevion Harrison makes a cut back to a hole created by No. 50 senior Ki Rankin and No. 56 sophomore Nashaun Price in Reidsville’s first game of the 2021 season on the road versus the Cardinals.