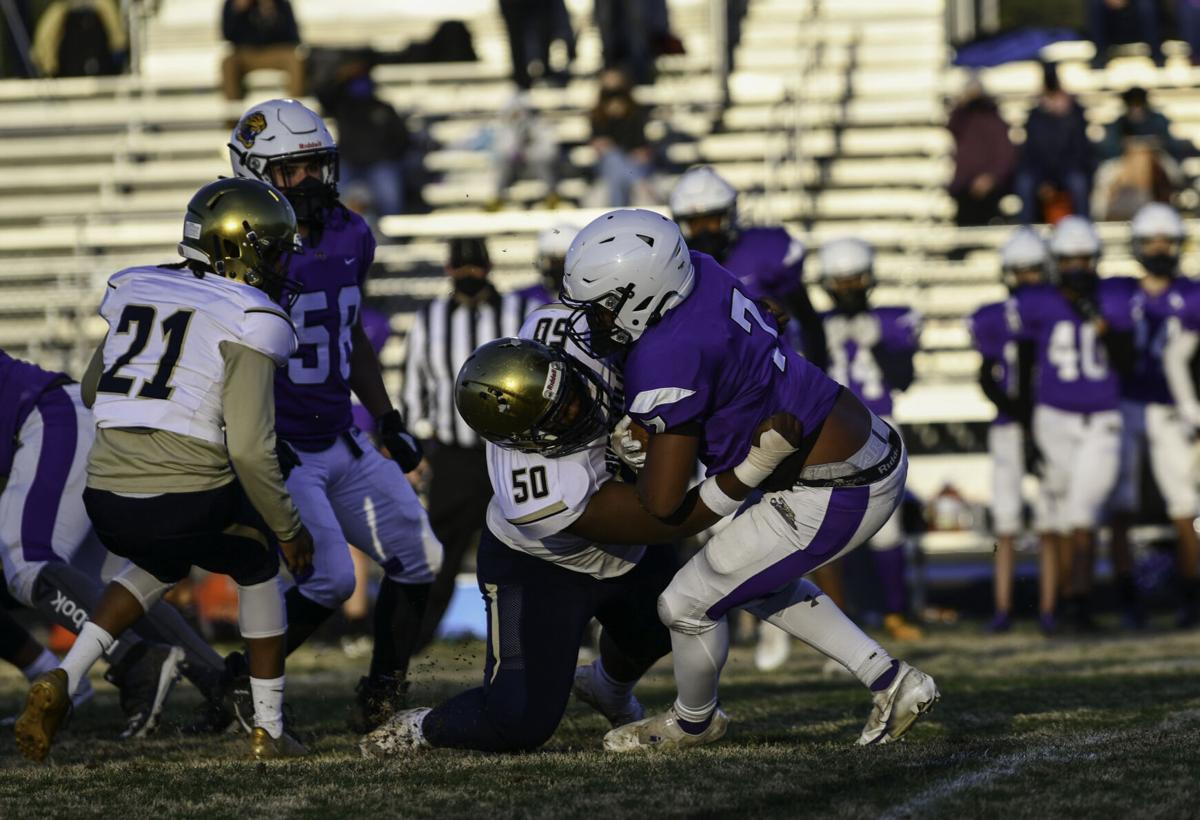 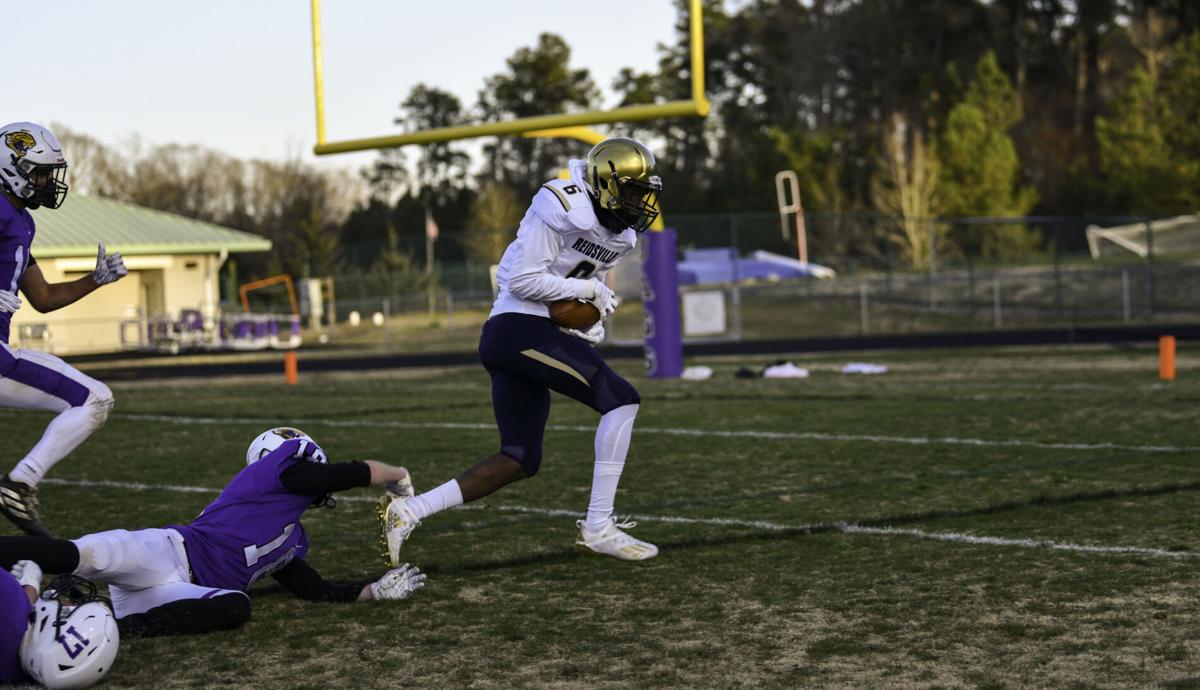 Reidsville wide receiver Jaden Robinson makes his way to the end zone for one of his three touchdowns.

The Rams set the tone early, racing out of the blocks and quickly putting points on the board while the defense shut the Jaguars down as RHS rolled to a convincing 49-0 Mid-State 2A Conference shutout road victory over Carrboro Friday night.

Three first quarter touchdown passes from quarterback Kyle Pinnix to Jaden Robinson, followed by a 91-yard punt return for another score by Cam Peoples, left little doubt what the outcome was going to be for the Rams with just 28 seconds remaining in the opening frame.

Reidsville’s quick-strike, opportunistic offense, combined with a lockdown defense led by senior Ki Rankin on the front line, never allowed the Jaguars offense to get in gear.

Early in the second quarter, Pinnix got the Rams going once again with a pair of touchdown strikes to Tamir Johnson and Breon Pass, then running back Ste’vian Harrison got in on the action, scoring from 3 yards out to basically put the game in the books.

Harrison’s score set up the running clock in the second half as the Rams called off the dogs to get the young guys some reps and close out the win.

Reidsville had 290 yards rushing versus Carrboro, led by Harrison, who had 142 yards on 10 attempts. Pinnix continued to shine behind center, with an efficient 7 of 12 passing performance for 214 yards and five touchdowns, hooking up for scores with three different receivers.

It was yet another rough week for the Jaguars who continued to struggle after dropping their fourth-consecutive game with the regular season past the midway point.

On the other end of the coin, the Rams seem to have found their collective rhythm on both sides of the ball.

Reidsville enters the heart of the conference portion of the season with sights set on a Mid-State 2A Conference regular season, and perhaps, yet another shot at a NCHSAA state championship.

As strange as it is to be playing high school football in March due to the rescheduled season because of the pandemic, fans better enjoy it while it lasts because it will be over as quickly as it began.

With three games, all wins, under their belt, Reidsville has just a trio of regular season contests remaining. The good news is the Rams will be favored versus their final three opponents in Graham (1-3, 1-1), Cummings (1-2, 0-1) and Bartlett Yancey (3-1, 2-0).

Looking ahead, the Buccaneers seem to pose a formidable threat to RHS this season, averaging just over 39 points per game, more than any other team Reidsville has faced to date.

Regardless of who they play, there is no room for error, because if Reidsville (1-0, 3-0) slips up against any of them, there is no guarantee they will earn a postseason bid. The only way a team can absolutely secure a ticket to the playoffs is to win the conference, so the Rams are looking to sweep the field in order to get a shot at making the programs fifth-straight 2A NCHSAA state championship appearance.

Obviously, the 2020 season was scrapped because of the COVID-19 outbreak, so 2021 is a chance to put the cherry on top for a program that has the more state championships (21) than any other high school team in North Carolina.

Dan Wiederer: Aaron Rodgers is as good as gone from Packers. Suddenly Bears might have best QB situation in NFC North.

Scott Fowler: Roy Williams laughs off another bogey. This is retirement, and he’s loving it. (copy)

Reidsville wide receiver Jaden Robinson makes his way to the end zone for one of his three touchdowns.