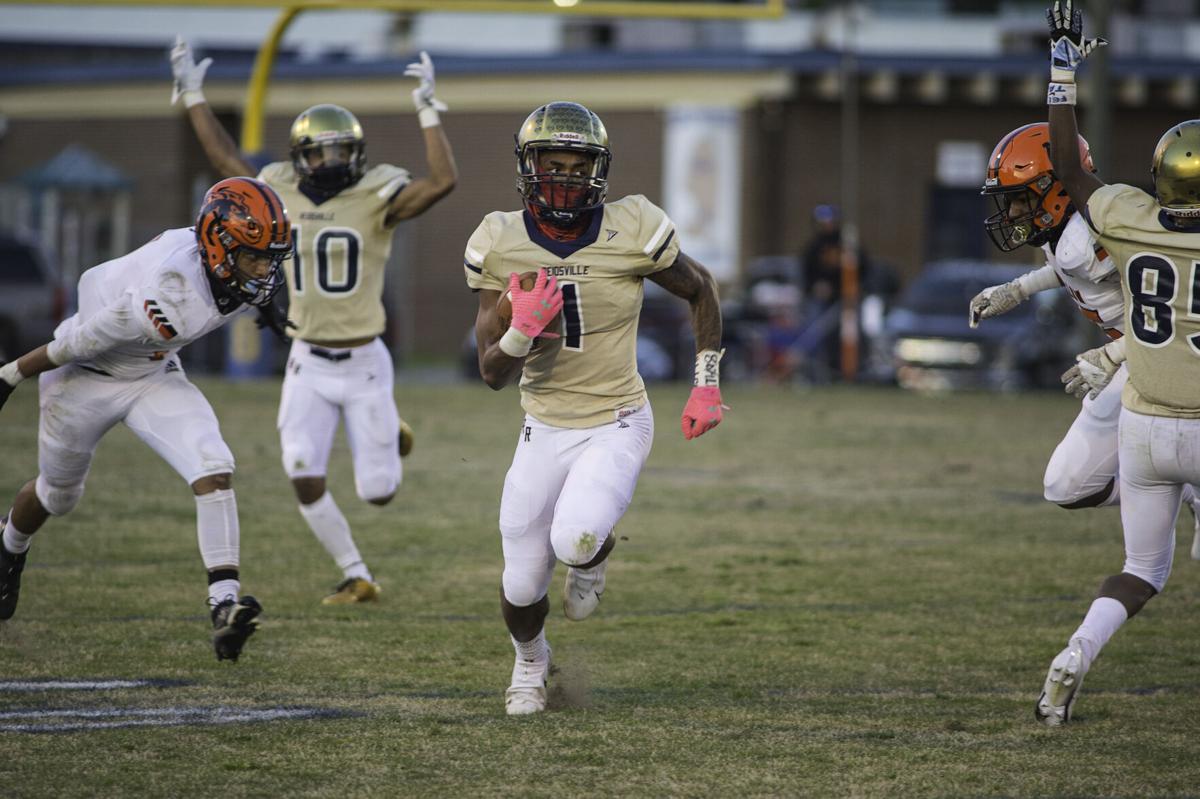 Rams senior Breon Pass breaks into the open and would go on to score a touchdown on an 81-yard kickoff return to give RHS a 21-0 lead with 8:26 to go in the second period. 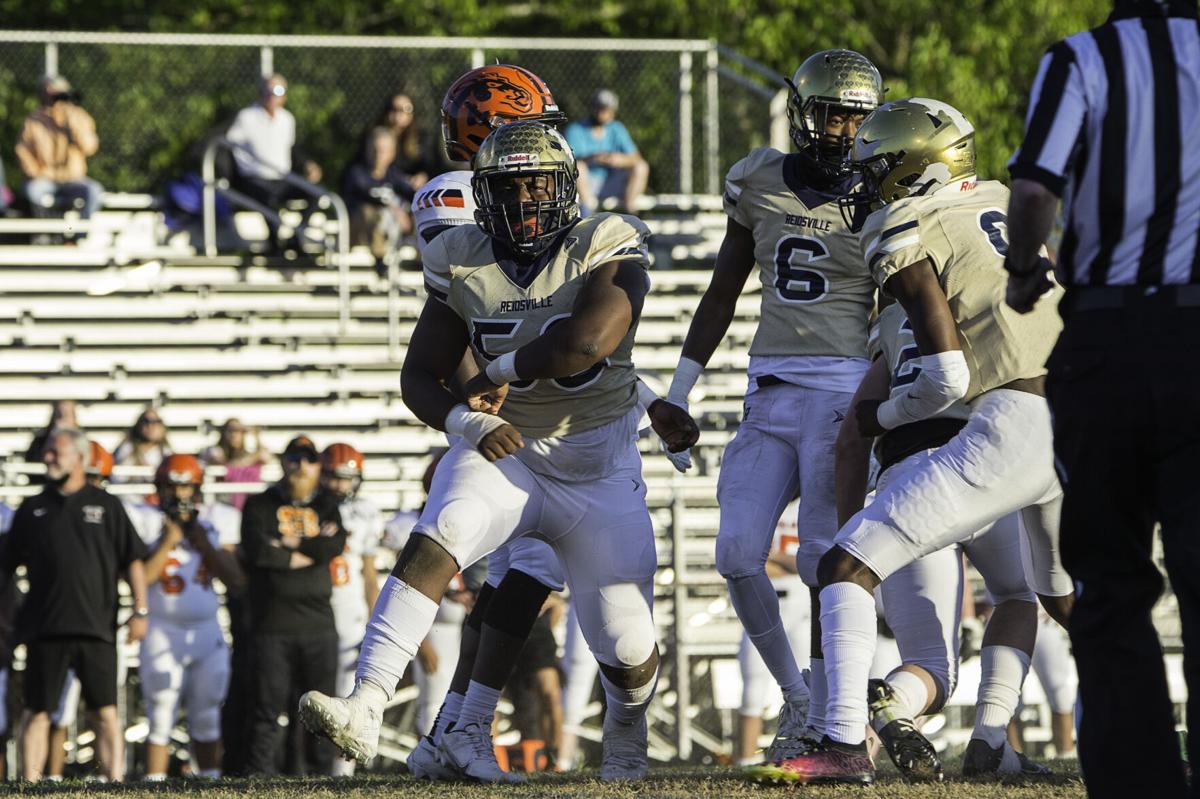 Reidsville senior defensive lineman Ki Rankin celebrates after a big stop in the backfield in the Rams’ fifth defensive shutout of the season on Friday. 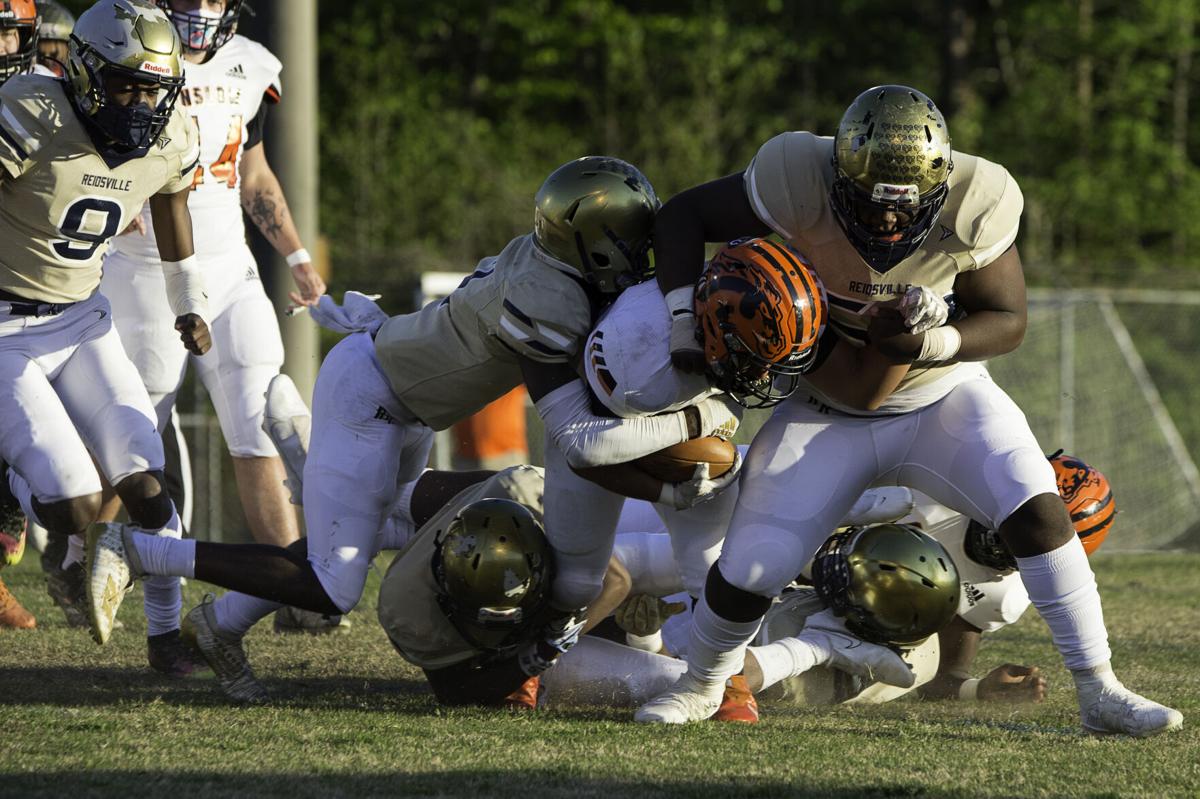 Several Reidsville defenders corral a Stallions running back in first-quarter action. The undefeated No. 1 seed Rams dominated in a 50-0 shutout win over No. 8 Southwest Onslow in the opening round of NCHSAA state football playoffs Friday night at Community Stadium.

The undefeated No. 1 seed Reidsville football team dominated in a 50-0 shutout win over No. 8 Southwest Onslow in the opening round of NCHSAA state football playoffs Friday night at Community Stadium.

After the Stallions’ initial drive stalled, the Rams put together an eight-play drive which culminated with a 7-yard touchdown by running back Ste’vian Harrison to give RHS the 7-0 lead after the Anthony Franson PAT. That’s all the scoring either team could muster in the opening frame, but things would shift firmly in Reidsville’s favor in the second quarter when quarterback Kyle Pinnix threw a perfect over-the-shoulder sideline-strike to wide receiver Breon Pass that resulted in a 50-yard trip to the end zone. Just a few minutes later, Pass had yet another game-breaking play, as he returned a Southwest Onslow punt 81 yards for a touchdown for the 21-0 lead with 8:26 to go in the second period.

After the Rams defense forced a SWO three-and-out, freshman Queshyne Flippen ran 36 yards on the first play from scrimmage for another TD, followed by a 2-point conversion throw from Pass to Kahree Hayes for the 29-0 advantage minutes before halftime.

Reidsville picked up right where they left off in the second half courtesy of an 83-yard touchdown return on the opening kick by Cam Peoples to extend the lead to 36-0.

Pinnix hooked up with Peoples on a 51-yard scoring-strike setting up the running clock, then the quarterback reached the end zone on the rush on the second play of the fourth quarter from 15 yards out to close out the win.

Harrison led the charge on the ground churning out 107 yards on eight carries on a night where the Rams had 159 yards rushing.

Pinnix showed off his capacity with the deep ball, connecting on two 50-plus-yard touchdown throws where he was 5 for 7 for 150 yards passing over the course of the night.

Another interesting statistic from the game was the puzzling time of possession situation. Even though SWO dominated in regards to time of possession with 39 minutes and 41 seconds compared to just eight minutes and 19 seconds for RHS, the Rams were still able to pile on the points. Aside from the punt and kickoff returns for scores by Pass and Peoples, the Reidsville offense ran just 19 plays that combined for the 50-point game total.

Defensively, Reidsville was once again on-point, rarely allowing the Stallions to move the chains. Led by Jaden McCain, who had a team-high 11 tackles, he had plenty of help from Kharee Hayes, Ki Rankin, Vince Widerman, Paul Widerman and Omarian Pettiford, who combined for 49 of the teams 73 tackles on the night.

The Rams entered the game coming off of a dominant 42-0 win over Bartlett Yancey which brought home the 2021 Mid-State 2A regular season championship April 8.

Reidsville is averaging 51.71 points through seven games so far this season.

RHS has made an appearance in the last four-consecutive state championship games, winning three. The Rams won 58-12 over Edenton Holmes in 2016, lost 35-28 in overtime to Wallace-Rose Hill in 2017, then defeated Elizabeth City Northeastern in back-to-back seasons in 2018 and 2019 by margins of 31-28 and 14-0 respectively.

One bit of bad news did surface this week in the Rams camp with sophomore standout linebacker and wide receiver Tamir Johnson out after suffering a season-ending knee injury in the regular season finale versus Bartlett Yancey last week. He was a key contributor over the course of the year and will be sorely missed.

Reidsville (7-0) will host No. 4 Wallace-Rose Hill (5-3) who dominated No. 5 Red Springs 65-28 in their first round game. The second round post season is set to kick off April 23 at a time yet to be determined.

After the first round game, Reidsville head coach Jimmy Teague reminded his players that Wallace-Rose Hill presented the Rams had some unfinished business on the table following the 2017 overtime title loss.

“No extra motivation because we know by playing them what a quality football team they have, so we have to have a great week of preparation,” the coach said.

And as much as he appreciates his senior leaders and their contributions over the course of the season, he said the younger players may very well be the key if Reidsville is to make another title run.

Rams senior Breon Pass breaks into the open and would go on to score a touchdown on an 81-yard kickoff return to give RHS a 21-0 lead with 8:26 to go in the second period.

Reidsville senior defensive lineman Ki Rankin celebrates after a big stop in the backfield in the Rams’ fifth defensive shutout of the season on Friday.

Several Reidsville defenders corral a Stallions running back in first-quarter action. The undefeated No. 1 seed Rams dominated in a 50-0 shutout win over No. 8 Southwest Onslow in the opening round of NCHSAA state football playoffs Friday night at Community Stadium.