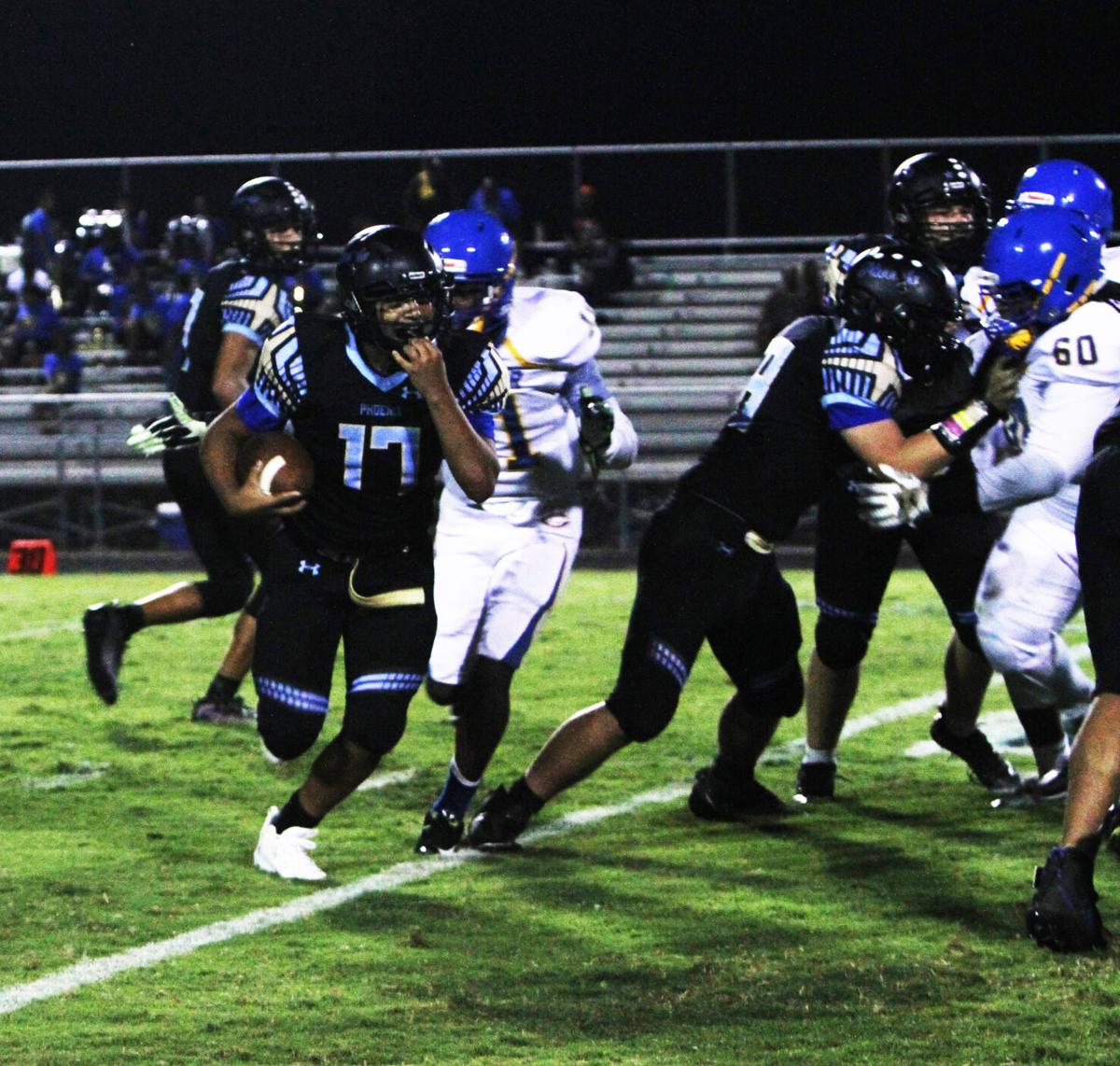 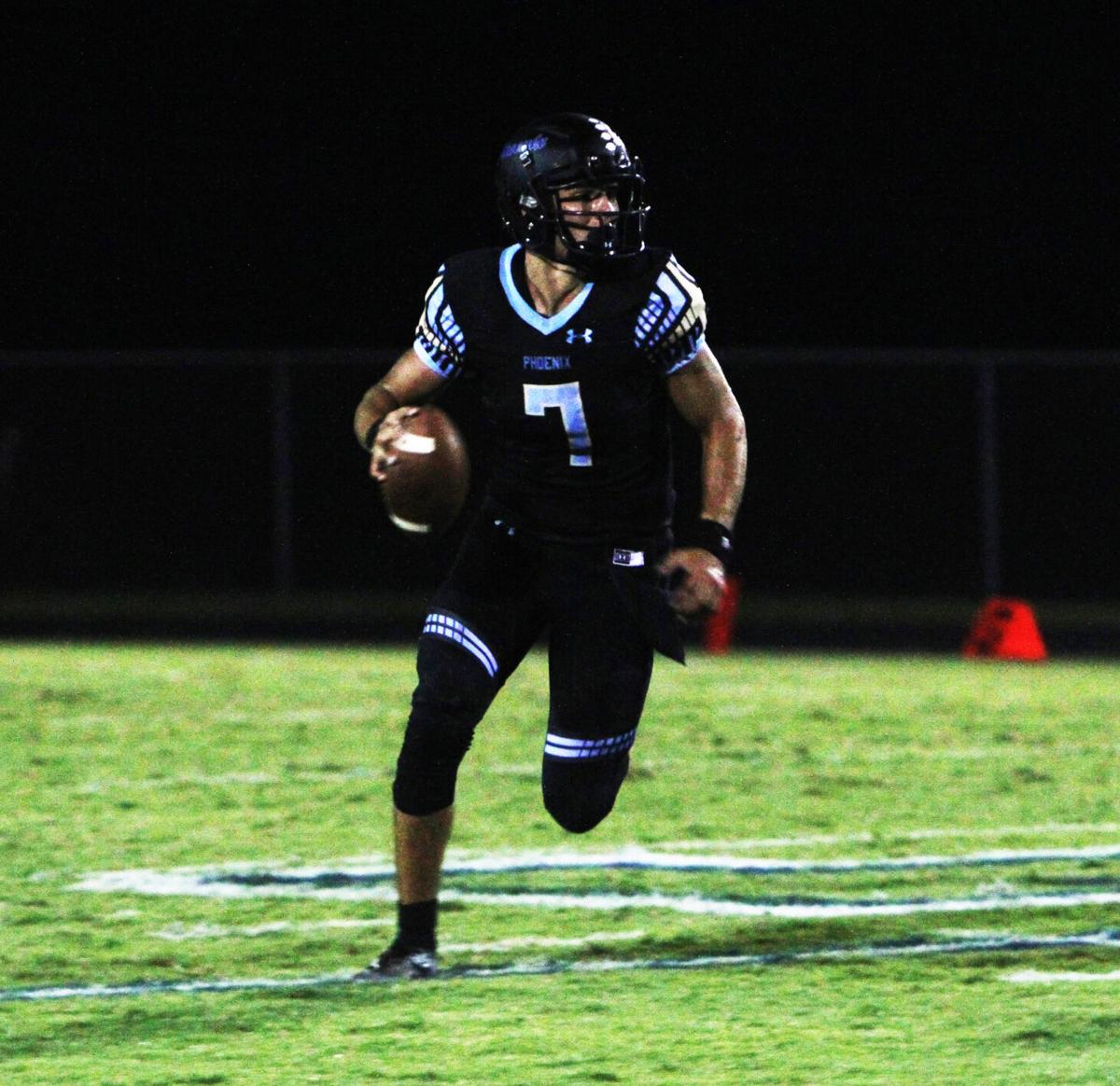 Junior all-around athlete Brady Elrod breaks out of the pocket and into the open for a gain. Elrod did an admirable job filling in for quarterback Matthew Wright in McMicheal’s victory over the Yellowjackets Sept. 10. 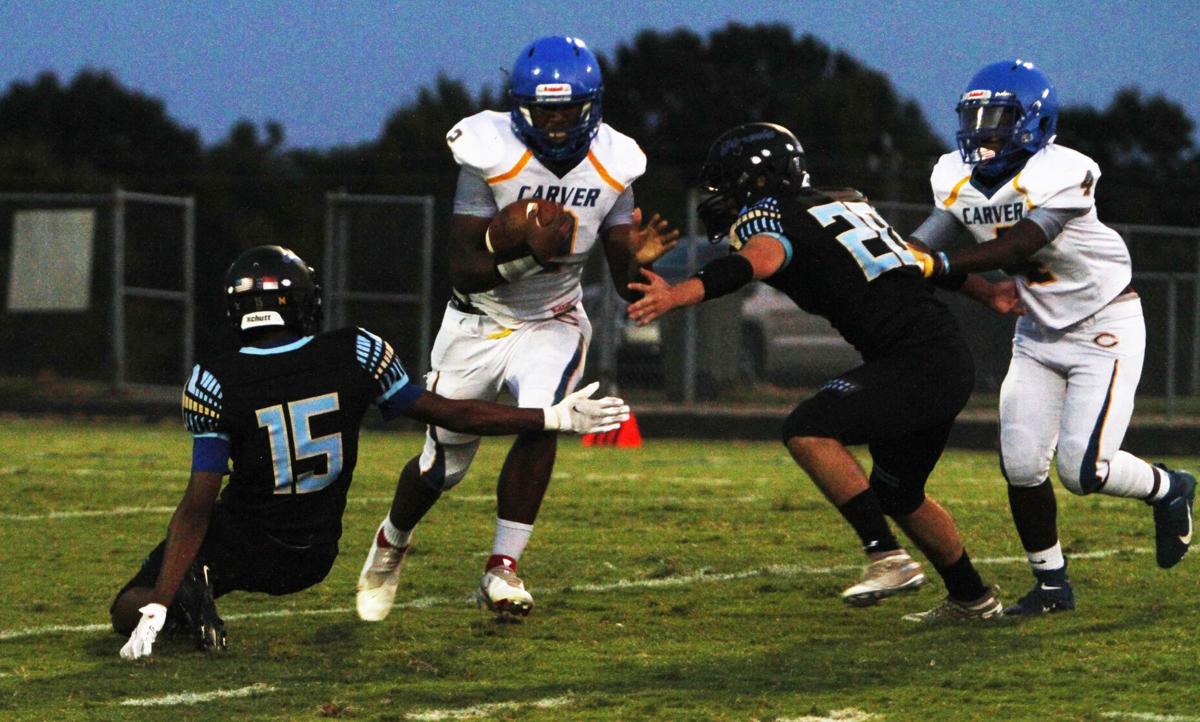 Carver running back Cederic Ferguson looks for running room as two McMichael defenders close in for the tackle. 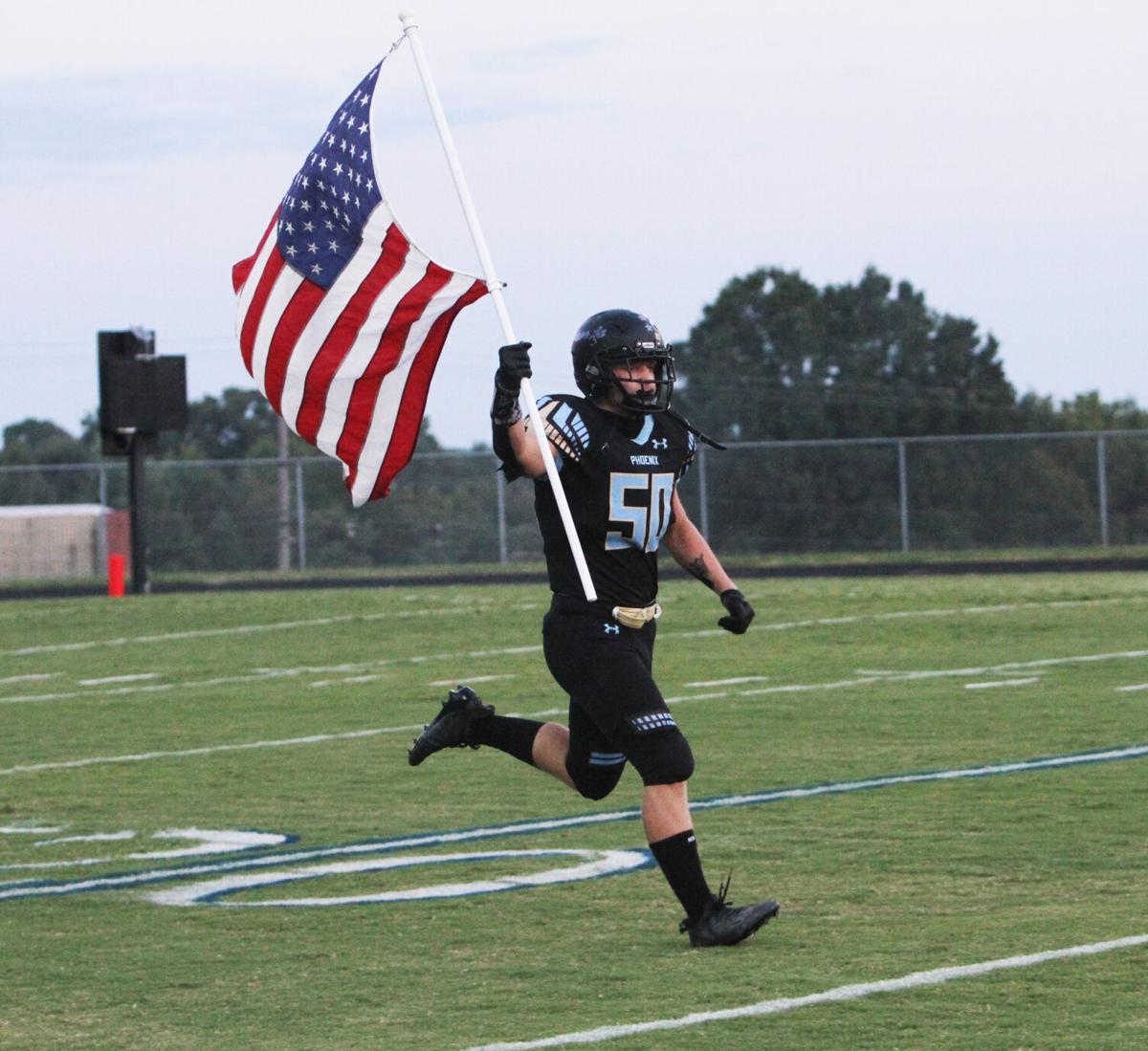 Phoenix senior Jacob Swisher leads his team out onto the field for McMichael’s first home game of the season Sept. 10 at Macfield Stadium. 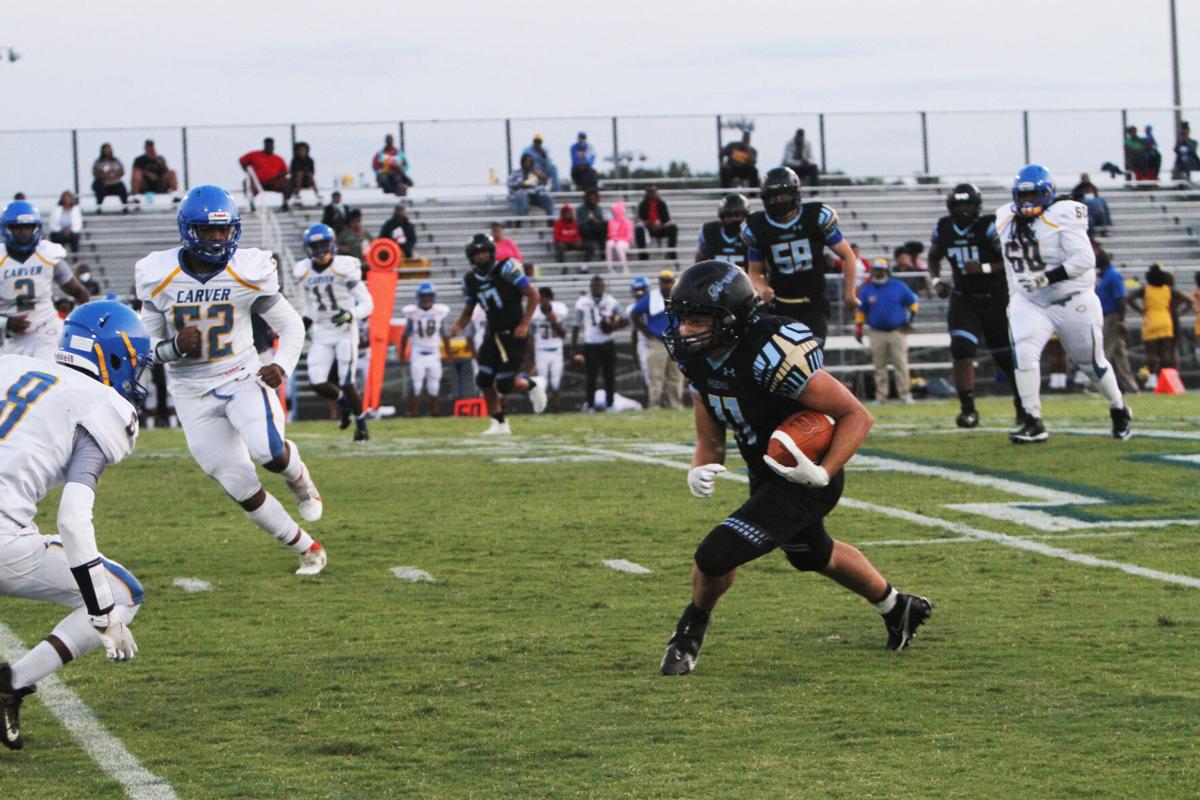 MAYODAN — With more than a dozen varsity players out due to exposure to the COVID-19 virus, for a team made up a mix of varsity and JV members, it looked like it would be a long night for McMichael.

Apparently no one told the Phoenix football team as they put together a balanced game plan comprised of opportunistic special teams, a vital mix of the pass and the run as well as a determined bend-but-don’t-break defense that continually stepped up all night long as McMichael upended Carver 15-6 Friday night at Macfield Stadium.

Because of the COVID situation, the Phoenix were down to their second, and in several cases, third string players at key positions, perhaps most importantly at quarterback.

Brady Elrod, arguably McMichael’s best all-around athlete, stepped in at QB for Matthew Wright and was remarkably poised with both his passing game as well as on the run despite the fact he hadn’t even competed at the position since 7 on 7 drills earlier this summer.

After a scoreless opening quarter, Elrod completed a couple of passes to keep the chains moving and Cody Yokeley had several strong runs to advance the ball past midfield. Unfortunately the drive stalled inside the 10 yard line, but kicker Jalim Hernandez made sure the Phoenix didn’t come up empty as he drilled a 25 yard field goal for the 3-0 lead with 11:52 to go in the second quarter.

The Yellowjackets wasted little time returning the favor as Reginald Dubose broke loose around the right edge on a sweep and raced 65 yards for a touchdown. The 2-point conversion failed, but the score gave Carver the lead at 6-3 with 10:59 to go in the half.

On the ensuing kick return, Harris hooked up with Elrod on a nifty reverse for a big gain that advanced the ball across the 50 yard line to set McMichael up in prime scoring position with a chance to take the lead.

Five plays later, Elrod hit Yokeley on a perfectly executed 25 yard post route for a touchdown to put the Phoenix back on top 9-6 after the missed P.A.T. with 8 minutes to go. That would be the final score of the half, but DMHS wasted little time at the beginning of the third frame as Isaiah Harris pulled off a pulled off the fake to Elrod and Carver took the bait. By the time the kick team realized Harris had the ball instead of Elrod, it was too late as he outran everyone for an 80 yard TD. The extra point was blocked, but nevertheless the Phoenix were now in the driver’s seat with a two-possession 15-6 advantage with 11:47 to go in the game.

“Our defense, we had a great scheme. We told the kids before the game and at halftime too that this game is like a prize fight. They are going to come out here and throw some hay-makers, and we’ve got to weather those storms – keep hitting the body, keep hitting the body – and that’s what we did,” said McMichael head coach Tony McCants. “We were able to box in and contain Blackburn. Everybody he’s run against, he’s had success. He had a 99-yard touchdown run against North Moore, and he took the game over against Highland Tech. So he was somebody that we knew going in that we were going to have to contain and we had to stop from making the big play. I felt we were pretty successful with that.

“We knew they were jet-heavy and they tried to get outside a lot. They popped that one jet-sweep on us, but other than that our kids responded well and that was that hey-maker we talked about. We just kept plugging along and kept fighting and the odds weren’t in our favor tonight.”

It was DMH’s first game in two weeks. Their previously scheduled home game versus South Stokes Sept. 3 was cancelled due to exposure to COVID by several Sauras players.

“Hats off to Carver. They played tough, they played gritty, and that coach has them going in the right direction,” McCants said. “I think the running back No. 3 (Jamaari Blackburn) and several other players were giving us problems all night, but I’m super-proud of my guys and the way that they responded to this adversity.

“Having some key players being put in COVID quarantine last week, our guys responded. We had to put some players in different spots. For the freshman Cody Yokeley to run the ball the way he did and to catch that touchdown for us was big. Like I said, I’m just super proud of McMichael right now. We are starting to change the culture here and win these ugly games. In the past two weeks, we’ve lost the ugly games, so hopefully this week helps us to start to turn that corner and start learning how to win ugly and eventually win big.”

McMichael (1-2) will hit the road to take on West Stokes in their first Mid-State 2A Conference game of the season next Saturday. It will be league play the rest of the way for the Phoenix.

The Rockingham County girl’s golf team won the Mid-State 3A Conference championship for the eighth-straight year on Oct. 11.

MAYODAN — Aside from allowing a scoring drive on Morehead’s opening possession of the game, it was all McMichael, all night long, as the Phoen…

COMMENTARY: Urban Meyer should be fired by Jaguars for being an incompetent embarrassment

Rams prove too tough for T.W. Andrews in Mid-State 2A Conference action

HIGH POINT — Following a brutal three-game stretch in seven days, undefeated Reidsville powered through and eventually pulled away for a 43-12…

GREENSBORO — Kim Record’s ouster as UNCG’s athletics director, according to her former boss, was a necessary decision to help the Spartans’ at…

$50K fine, no prosecution for ex-coach in college scam deal

Junior all-around athlete Brady Elrod breaks out of the pocket and into the open for a gain. Elrod did an admirable job filling in for quarterback Matthew Wright in McMicheal’s victory over the Yellowjackets Sept. 10.

Carver running back Cederic Ferguson looks for running room as two McMichael defenders close in for the tackle.

Phoenix senior Jacob Swisher leads his team out onto the field for McMichael’s first home game of the season Sept. 10 at Macfield Stadium.