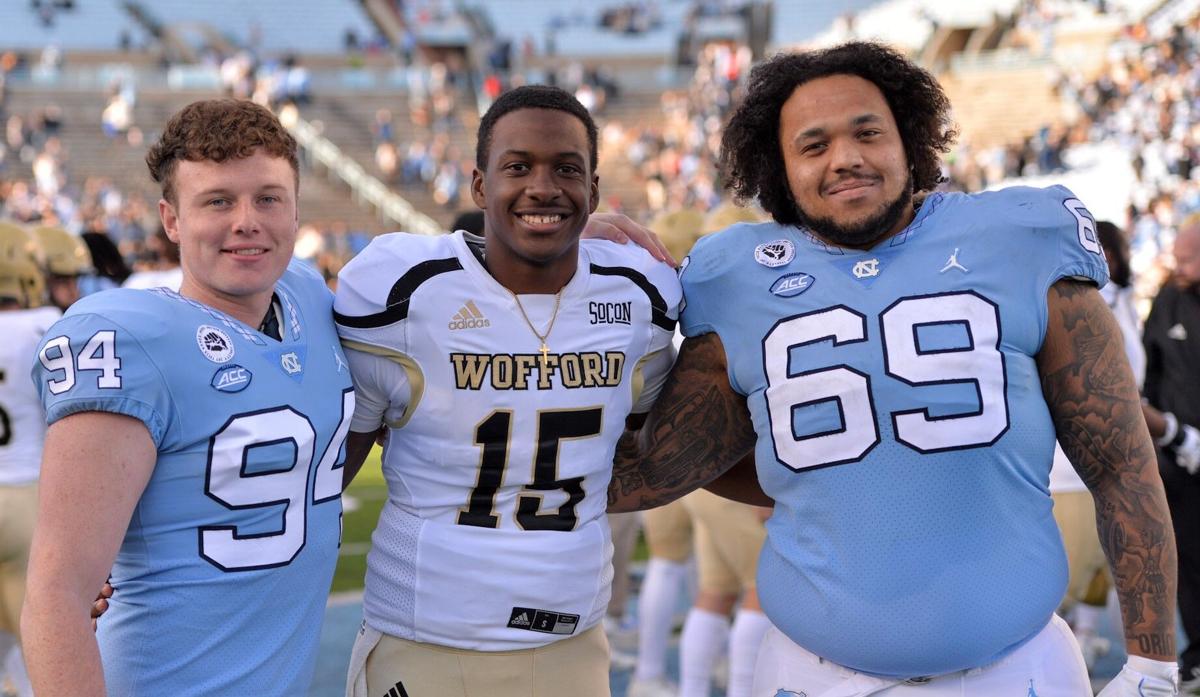 Adam Buck (from left), Kyle Pinnix and Quiron Johnson get together for a photo and a few minutes of fellowship after North Carolina’s 34-14 win over Wofford on Nov. 20 at Kenan Stadium in Chapel Hill. 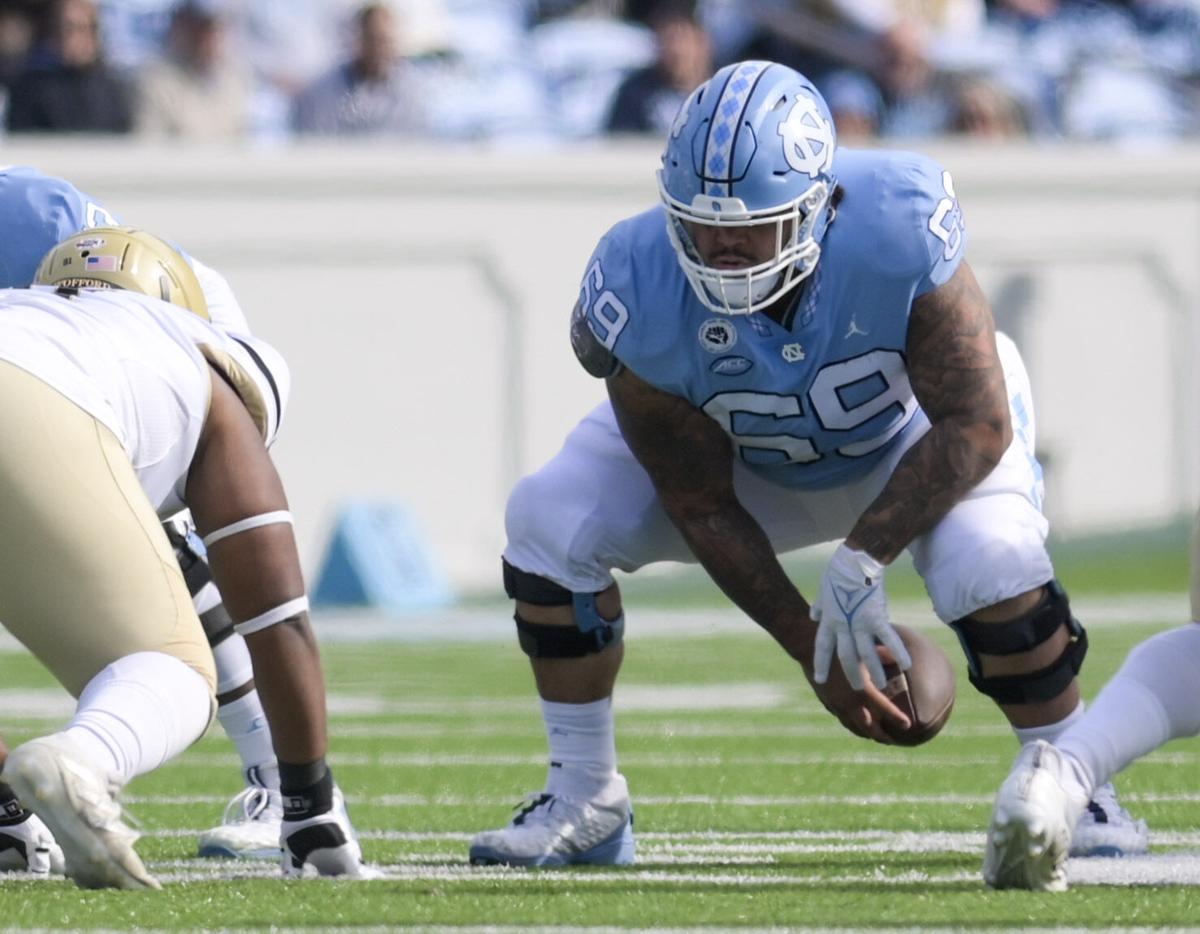 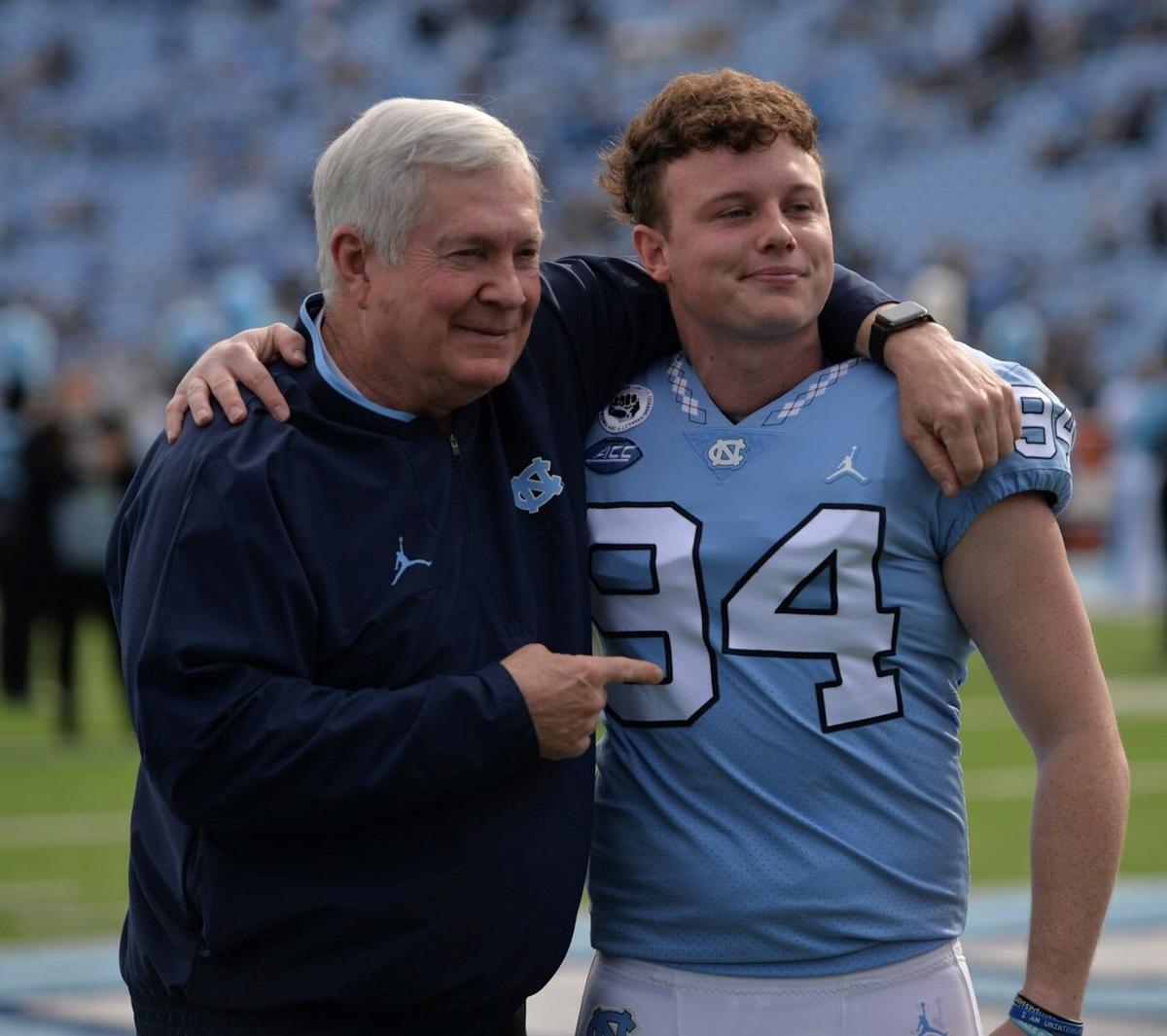 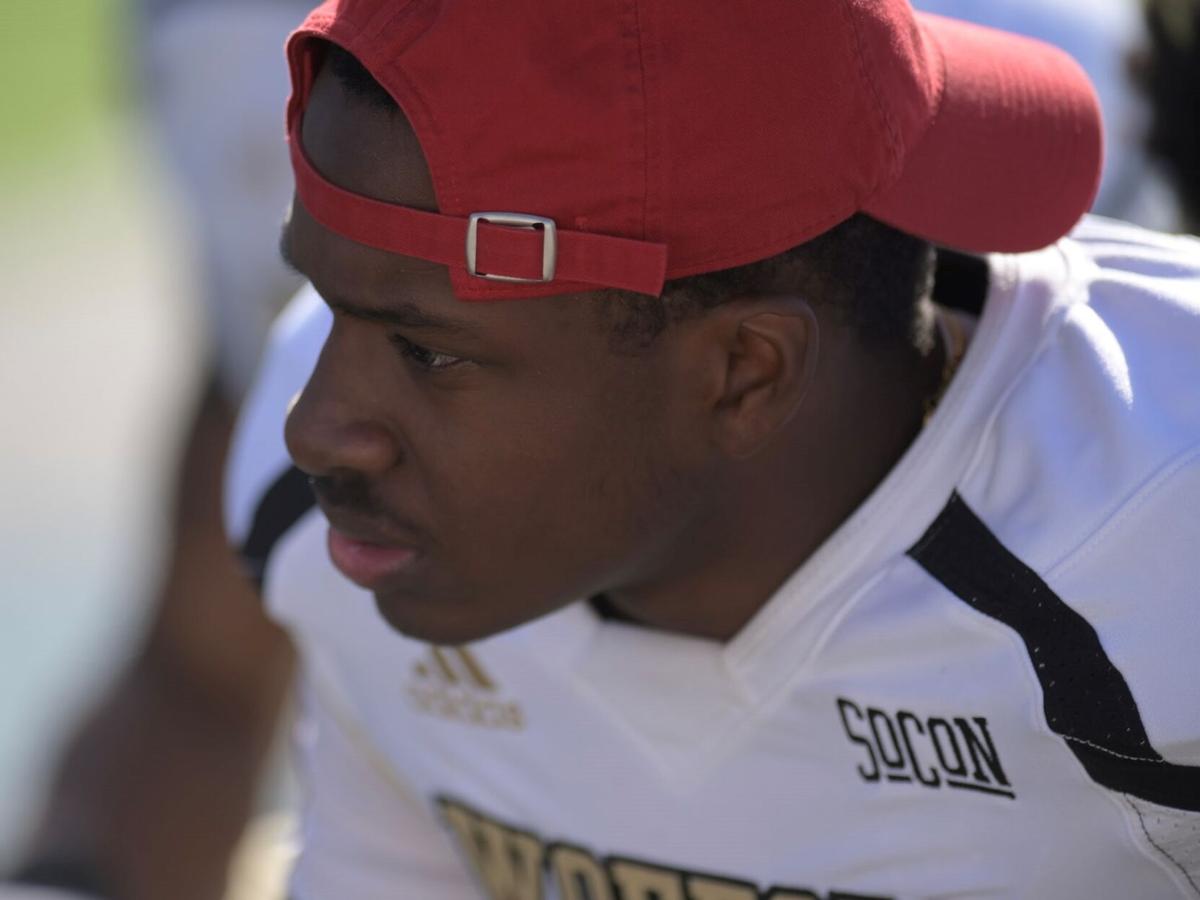 Former Rams quarterback Kyle Pinnix, who currently plays for Wofford, listens to coaches during a break in the action versus North Carolina last Saturday afternoon. As fate would have it, just six months and 12 days after Pinnix scored his last touchdown as a high school senior at Reidsville in Chapel Hill in the state championship game, he scored his first college touchdown at Kenan Stadium

CHAPEL HILL – Rockingham County natives Adam Buck, Quiron Johnson and Kyle Pinnix are carving out their own unique identities on the Division I gridiron while pursuing their college degrees.

The three student-athletes, from two county high schools, Reidsville and Rockingham, had distinctively different paths to reach their athletic and academic goals.

Saturday’s North Carolina versus Wofford football game went about as expected as the 6-5 Tar Heels cruised to a 34-14 victory over the 1-10 Terriers, but for the trio’s hometown supporters, the score and outcome mattered not.

Meanwhile Johnson, a Reidsville graduate, initially a walk-on at the University of North Carolina, not only earned a scholarship, but eventually a starting job as center.

Then there was Pinnix on the opposite sideline, also a former Rams player. He received a full scholarship to Wofford after leading Reidsville to three-consecutive state championships through the spring of 2021.

So in a small way, the Nov. 20 game was a little bit like a county family reunion.

Buck’s unlikely path to the gridiron

Buck, the Tar Heels senior second string punter, earned a walk-on spot on the roster as a junior and surprisingly enough, never played a snap of football in his life before entering college.

Prior to making the squad at North Carolina, football never crossed his mind.

Unlike most of his current teammates growing up, soccer was his passion and a sport Buck played year-round. Known as one of the top goal keepers in the area, he was a captain during his senior season at RCHS and earned Mid-State 2A All Conference as well as All Region honors.

In addition, he was a member of the Piedmont Triad Football Club state championship club team in the spring of 2018 prior to enrolling at North Carolina.

Buck had offers to play college soccer, but for him, UNC was the place to be from an academic standpoint. Plus, he thought with some hard work, he had a shot at earning a walk-on spot on the UNC soccer team.

“As soon as I got to Carolina, my whole mind-set was that I had to make the men’s soccer team. I was constantly talking to coaches since I didn’t get the opportunity straight out of high school, so I was taking on any prospect I possibly could to be around soccer,” said Buck.

First he joined the club team at UNC during his first semester as a freshman, then decided to reach out to North Carolina head women’s soccer coach Anson Dorrance for advice and to offer to volunteer. The legendary coach not only served as a mentor, but brought him on to help train against his team which eventually led to work with the men’s varsity program as well.

Fast-forward to the beginning of his sophomore year, Buck heard about open tryouts for the football team, and on a whim, he decided to give it a try.

On his initial kick at the tryout he booted the ball about 60 yards which made more than a few heads turn his way. After a few more successful kicks while trying to ensure his first kick wasn’t a fluke, the coaches challenged him to hit the roof in the inside training facility, which he did.

Realizing Buck had legitimate potential, the coaches decided to give him a chance if he was willing to work for it with no guarantees or promises made. Nevertheless, he trained the entire sophomore year in anticipation for a tryout as a junior and eventually earned a roster spot with the Tar Heels football team.

“Honestly I had never played football. It was interesting because I actually had two (soccer) assistants in high school have me punt the ball the length of the field which turned into scores off two assists, but I never connected the dots to football, but I’m sure glad I did when I got to UNC,” Buck said.

Johnson’s no nonsense approach pays off

According to his high school and college coaches, his nose-to-the-grindstone approach is what not only earned Johnson a scholarship at UNC, but eventually a job as starting center.

After making the team as a walk-on in 2017, he eventually saw action as a redshirt freshman in 2018. Johnson continued to work hard in the off season and appeared in more than half a dozen games as a sophomore and was eventually awarded a scholarship. By the time his junior season rolled around, he really started to make an impact, playing in all 12 games and receiving the team’s Don McCauley “Be The One” Award.

Over the years, one of the things that really set him apart was his versatility. Johnson not only got game reps on the defensive line, but also saw some time at offensive guard before earning the job as the center this season. As it turned out, his efforts and success has proven to be an inspiration to many of the guys on the team.

“I’ll speak on him because he’ll never speak on himself. Q is a quiet and humble guy. He’s the kind of guy that could brag because of what he’s accomplished, but he doesn’t. He is a technician on the field and puts his head down every single day and just goes to works. He’s a great guy and deserves all of the accolades because of what he has put into it,” said Buck.

Prior to enrolling at North Carolina, Johnson was a stalwart player on both sides of the ball in high school for his Reidsville team that finished undefeated at 16-0 and won the 2A NCHSAA championship his senior year in 2016.

As fate would have it, just six months and 12 days after Pinnix scored his last touchdown as a high school senior for the Rams in Chapel Hill in the state championship game, he scored his first college touchdown for Wofford at Kenan Stadium as well.

The score came on a play action fake to sophomore running back Ryan Ingram, where Pinnix slipped a couple of Tar Heel defenders in the backfield and sprinted 3 yards around the right edge for the score that cut the Carolina lead to 10-7 with 6:22 to go in the second quarter.

“It was electric. Including playing at Reidsville, this was my third time here. I played here my freshman year and we lost, but in my senior season, we were lucky enough to win. From my freshman year to now, things have come full-circle. On my run, they wanted me to give it, but I saw my read, so I just pulled it. It was just amazing and I’m blessed honestly,” Pinnix said.

The gifted dual-threat signal caller was named the 2021 2A NCHSAA state title game’s Most Valuable Player as he compiled 229 yards passing, threw three touchdowns and ran 61-yards for another score in the Rams 35-6 win over Mountain Heritage May 8 at Kenan Stadium.

In three seasons as a starter for the Rams, he threw well over 100 touchdowns and cemented himself as one of the programs all-time greatest quarterbacks.

Pinnix said he hopes the touchdown at UNC is a sign for good things to come as he looks to get a shot at earning the starting quarterback position at Wofford, and as it turned out, Pinnix had a fan on the Carolina sideline following the score.

“Kyle, he’s a great guy too and really talented. When he scored the touchdown, I was secretly smiling to myself because I was happy to see a hometown guy succeed even though I wasn’t supposed to because he was on the other team,” Buck said with a laugh.

Rockingham County student-athletes taking their games to next level

Dudley advances to regional final with 20-6 win at Statesville

Stingy defense and big plays carry the Panthers into a 3-A West matchup with Belmont South Point.

A pair of first half rushing touchdowns by Shyheim Watlington, in addition to two passing scores from Al Lee to Que’shyne Flippen and Jaden Mc…

Hall of Fame basketball coach Jim Calhoun's first attempt at retirement lasted less than six years and the 79-year-old said Friday he's not expecting to spend his second one on a golf course.

BOONE— App State’s offensive line has been named one of 13 semifinalists for the Joe Moore Award, which is given annually to the top offensive…

Adam Buck (from left), Kyle Pinnix and Quiron Johnson get together for a photo and a few minutes of fellowship after North Carolina’s 34-14 win over Wofford on Nov. 20 at Kenan Stadium in Chapel Hill.

Former Rams quarterback Kyle Pinnix, who currently plays for Wofford, listens to coaches during a break in the action versus North Carolina last Saturday afternoon. As fate would have it, just six months and 12 days after Pinnix scored his last touchdown as a high school senior at Reidsville in Chapel Hill in the state championship game, he scored his first college touchdown at Kenan Stadium