The Broadway play “Hamilton” is the story of United States founding father Alexander Hamilton and has created a revolutionary moment in theater, with a score that blends hip-hop, jazz, R&B and Broadway music.

GREENSBORO — Triad audiences can be in "the room where it happens" when the Broadway megahit "Hamilton" comes to the Steven Tanger Center for the Performing Arts in 2022.

They gathered outside the Tanger Center as a video clip from "Hamilton" played on the marquee.

The venue had been scheduled to hold its grand opening in March 2020, but the COVID-19 pandemic has kept it closed. Its opening date has not been announced.

"Today’s very special announcement, before the Tanger Center has even opened, proves that Greensboro and the entire Piedmont Triad region will have the opportunity to enjoy the very best in touring live entertainment," Brown told the crowd.

Go to TangerCenter.com/Hamilton for details on how to buy tickets.

Prices will start at $49 plus taxes and ticket fees, and will vary by seat location and performance.

The story of United States founding father Alexander Hamilton created a revolutionary moment in theater, with a score that blends hip-hop, jazz, R&B and Broadway music.

That score features songs such as "My Shot," "The Story of Tonight" and of course, "The Room Where It Happens."

The cast for this production has not been announced.

The Tanger Center, a 3,023-seat, $93 million venue at 300 N. Elm St., resulted from a partnership between the city of Greensboro and private donors.

The Greensboro Coliseum complex will manage it.

Brown said that the goal is to open the Tanger Center before the inaugural Broadway season starts in October.

But it first has to line up music stars to perform. Those artists have a lot to organize before taking a tour on the road, he said.

A revised schedule calls for its first Broadway season to open Oct. 6 with the touring show, "Wicked." More than 16,000 Broadway subscribers have bought season seats.

But audiences also have clamored for "Hamilton."

Brown thanked Nederlander, PFM and subscribers for making it happen. “Hamilton” is a special event and not part of a particular Broadway season.

"Attracting the most popular touring Broadway show in the world would not have been possible without the support of the 16,435 Broadway series subscribers," Brown said.

Those current Broadway season seat members will have first access to their same reserved season seats for "Hamilton."

A limited number of new inaugural Broadway season seat memberships are currently available. New members will be granted access to buy season seats to "Hamilton" as part of their membership.

Broadway season seat members must pay their "Hamilton" invoice by May 21 to retain their same seat for the show.

The public on-sale date for individual tickets to "Hamilton" will be announced later.

With script, music and lyrics by Lin-Manuel Miranda, direction by Thomas Kail, choreography by Andy Blankenbuehler, and musical supervision and orchestrations by Alex Lacamoire, "Hamilton" is based on Ron Chernow’s biography.

It has won Tony, Grammy and Olivier Awards, the Pulitzer Prize for Drama, and an unprecedented special citation from the Kennedy Center Honors.

The national tour performed in 2018 at the Durham Performing Arts Center. It is scheduled to return to DPAC from May 17 to June 5, 2022.

Before she was elected to Congress, Manning was the chief private fundraiser for the Tanger Center effort.

Manning said she looks forward to seeing "Hamilton" on its stage.

"The Tanger Center is an extraordinary example of people coming together in a remarkable public-private partnership to create something that will spur our economy and benefit our community for generations," Manning said.

What: National touring production of "Hamilton"

Tickets: Start at $49, plus taxes and fees. Current Broadway season subscribers will have first access to their same reserved seats for "Hamilton." A limited number of new inaugural season Broadway season seat memberships are available. The public on-sale date for individual tickets to "Hamilton" will be announced in the future. 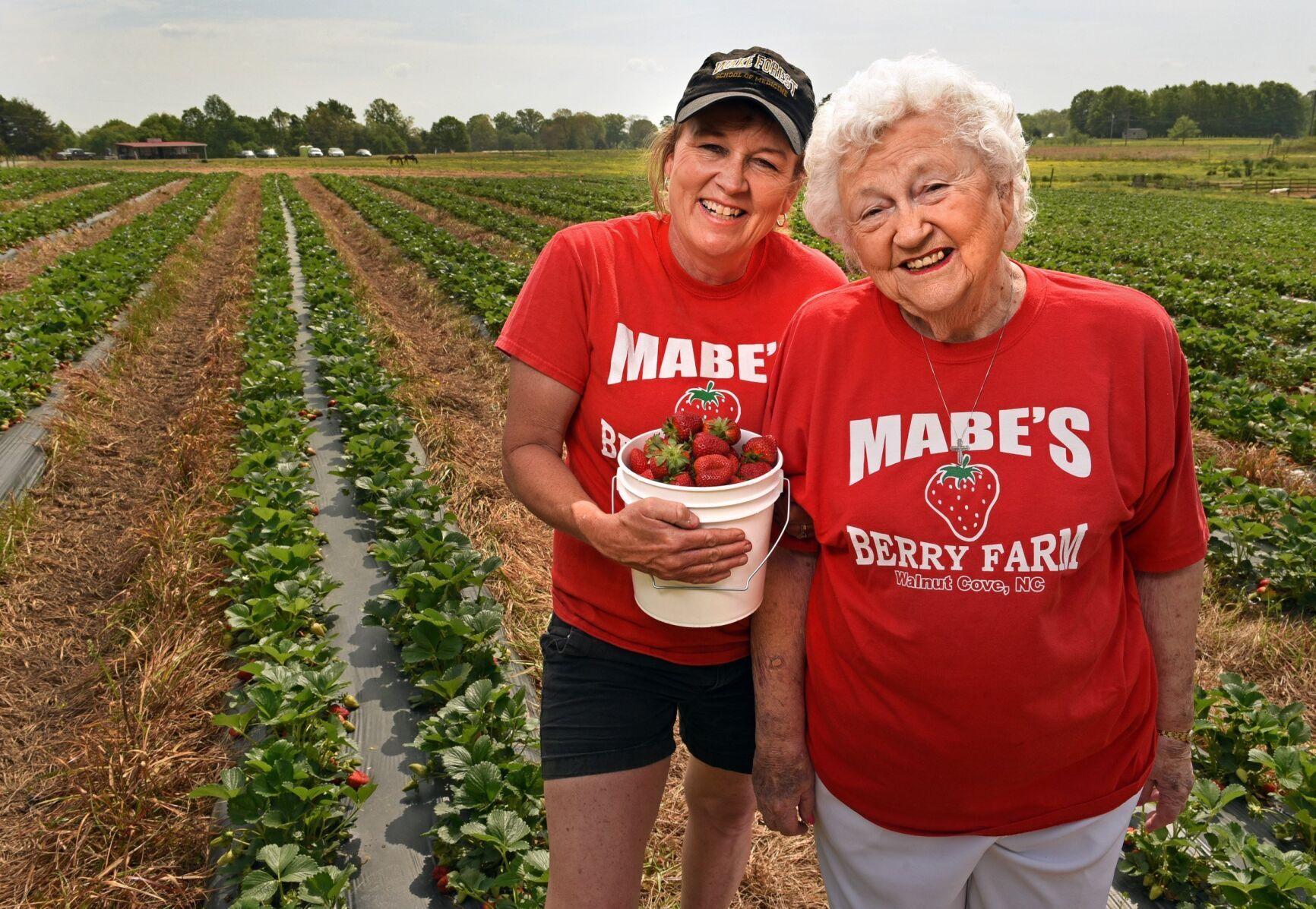 Christy Mabe Rogers of Mabe’s Berry Farm with her mom, Emma Mabe, who still likes to hang out at the field stand during strawberry season.

GREENSBORO — Guilford County Schools will not be starting an Arabic language program at Ragsdale High School in Jamestown next school year, despite receiving a grant to do so from Qatar Foundation International. The district is not saying why.

During a school board meeting on March 9, Superintendent Sharon Contreras announced that Ragsdale High and the global languages department had been awarded a grant to offer Arabic language instruction, beginning with the 2021-22 school year. It would have been the first Arabic program in Guilford County Schools.

She said Ragsdale High received an initial grant of $67,000 to hire a teacher and that the school would receive an extra $14,000 for resources, with the funding for up to four more years if they built a sustainable program.

According to its website, QFI works to foster “deeper understanding of the Arab world,” through the Arabic language as well as the region’s societies and cultures. QFI is part of the larger Qatar Foundation for Education, Science and Community Development, a nonprofit organization, according to QFI’s website.

Contreras said Arabic is the third most common language spoken in Guilford County, after English and Spanish. She said the course would be for Arabic families as well as all interested students.

After the announcement, Ragsdale principal James Gibson told the News & Record in an email that he would be happy to talk about it, “but as we are still awaiting some details we might want to hold off.”

Kimberly Pilling, the district’s director of global languages, said in an email that same week that she was waiting on a final approval from the district.

“We hope to have some information tomorrow and are definitely keeping our fingers crossed,” she wrote at the time. “We feel strongly that having an Arabic program at Ragsdale is important given the large and vibrant Arabic community in Guilford County.”

Last week, Pilling wrote in an email that she had just learned the district would not be moving forward with the program for the time being.

“It is my continued hope that we will be able to introduce this important language to GCS,” she wrote on Friday.

During a follow-up phone call, Silvers clarified that while Guilford County Schools did win the grant, he wasn’t sure whether the money had been transferred to the district. He did not provide any more information when asked again about why the district decided not to go forward with the program.

“I can try and get more details, but that’s just our statement at this time,” he said.

+5 Kidney recipient and his donor celebrate and raise awareness at 5K in Greensboro
Jessie Pounds
Apr 18, 2021

+6 School of rock: Music video from Irving Park students is their way of telling teachers 'thank you'
Jessie Pounds
Apr 16, 2021

RALEIGH — North Carolina lawmakers on Tuesday advanced a bill to make it illegal for physicians to perform abortions because of the fetus’ race or a prenatal diagnosis of Down syndrome.

A physician would be subject to monetary damages if they performed an abortion despite being aware that the pregnant woman’s decision to get the procedure was influenced by either of those two concerns.

A handful of states have passed similar laws regarding Down syndrome diagnoses and have been caught up in legal battles after their passage. Last month, a federal appeals court narrowly ruled to reverse two earlier decisions blocking enforcement of a 2017 Ohio law. A federal appeals court ruled in November that Tennessee could begin outlawing abortions because of a prenatal diagnosis of Down syndrome.

The General Assembly’s House Health Committee approved the Republican-backed measure and sent it to the judiciary committee, where it is scheduled to be considered today. If approved, it would then move to one more committee before making its way for a floor vote.

A spokesperson for Democratic Gov. Roy Cooper didn’t immediately respond to a request for comment on the proposal.

Bill sponsors say procedures performed based on race or Down syndrome amount to “discriminatory eugenic abortion.” The legislature in 2013 passed a law prohibiting sex-selective abortions — those based upon whether the fetus is male or female.

State Rep. Verla Insko, an Orange County Democrat, believes the proposal threatens a woman’s right to an abortion and would create another unfair hurdle for them.

“I find this bill discriminatory against pregnant women,” Insko said. “I cannot imagine anything that is more threatening than to have someone take control of my body. I would much prefer that we push birth control.”

The measure advanced on Tuesday in about 45 minutes, with limited discussion or debate. Some members of the public seeking to voice their opposition were not given the opportunity to speak, though speakers from both sides of the debate were given equal time.

Julie Scott Emmons, a representative from the conservative North Carolina Values Coalition, amplified the voices of parents who were happy with their decision to give birth to a child with Down syndrome and embraced the proposal.

“This bill is not a sham,” Emmons said. “It actually places a hedge of protection around an entire class of human beings who should not have to pass a genetic test to earn the right to be born.”

Down syndrome is a genetic abnormality that causes developmental delays and medical conditions such as heart defects and respiratory and hearing problems.

According to the National Down Syndrome Society, about one in every 700 babies in the United States — or about 6,000 a year — is born with the condition, which results from a chromosomal irregularity.

The North Carolina Obstetrical and Gynecological Society opposes the proposal, arguing that it should be left up to individuals, not state government, to decide what to do with information from prenatal fetal diagnoses.

Dr. Jonas Swartz, an OB-GYN and faculty member at Duke University, told lawmakers he worries the bill could reduce patient trust in the medical community and make it harder for doctors to communicate with those seeking their expertise.

“I want to provide safe, non-judgmental and high-quality care,” Swartz said. “This bill would make it harder to have open and honest conversations with my patients.”