After a three-year hiatus, the National Black Theatre Festival (NBTF) is back with more than 130 theatrical productions and a star-studded lineup of artists.

In addition to Black classics performed by national and professional Black theater companies, the festival will offer a number of new works in multiple venues in Winston-Salem.

“This is like the biggest reunion and celebration,” said Jackie Alexander, executive producer of the NBTF and artistic director of the North Carolina Black Repertory Company. “The festival has that amazing energy.”

“People are so hungry just to commune with each other. That’s what the festival is. It’s people just connecting. Everybody is in a good mood. Everybody wants to talk to everybody. That’s what people are longing for after being locked away for so long.”

The biennial festival, produced by the N.C. Black Repertory Company, was last held in 2019 because of the coronavirus pandemic.

Alexander has found the 2022 festival to be unusual and challenging because of factors such as the remaining pandemic precautions, the surging cost of living and the recent death of Sylvia Sprinkle-Hamlin.

Sprinkle-Hamlin led the N.C. Black Repertory Company as both its board chairwoman and executive producer of the NBTF. She took on producing the festival in 2007 after the death of her husband, Larry Leon Hamlin, who founded the company and produced its first festival in 1989.

“There are a lot of challenges because everybody’s been struggling for a couple of years,” Alexander said.

He said the company and festival staff has had to do remote work and learn how to produce virtually.

“We actually produced quite a bit of content (virtually) pretty quickly,” he said. “I think we started producing in April of 2020. We did interviews. We did performances from artists around the country. We’ve been busy producing virtually, but that was all free. All those productions weren’t really creating any revenue.”

In February 2021 for Black History Month, the N.C. Black Repertory Company did a world premiere of “Freedom Summer,” which will be live at the festival this year.

During those early pandemic times, the company also helped launch artarie.com, a streaming service in Winston-Salem, with “Freedom Summer.”

“It’s been a huge learning curve,” Alexander said. “The biggest challenge is just learning how to stay in contact with your audience when you can’t invite them to the theater.”

The company welcomed audiences back with an outside event in fall 2020 at Southeastern Center for Contemporary Art, then offered an outdoor, weeklong series of events in August 2021 that included a concert, movie screenings and a children’s production.

Alexander said people were excited about those outdoor events and are ready to come back to the 2022 NBTF.

“People connected with the festival love it,” Alexander said. “The community loves it. Our volunteers are here every day working all day to make sure we get it done.”

He is excited about two awards coming back from the 2019 festival. They are the Mabel P. Robinson Emerging Artist Award and the Sylvia Sprinkle-Hamlin Rolling World Premier Award aimed at getting the next generation involved and excited about the festival.

More than 60,000 people are expected to attend the NBTF, along with celebrities from stage, screen and television.

This year’s celebrity co-chairmen for the festival are Lisa Arrindell and Petri Hawkins Byrd.

Arrindell has starred in “12 Angry Men and ... Women” on Apple TV, BET’s “Favorite Son” and the Broadway production of “Cat on a Hot Tin Roof.” Her film credits include “Madea’s Family Reunion” and “Livin’ Large.”

Byrd is best known as a bailiff on “Judge Judy.” As an actor, his most recent work includes a guest starring role as Pastor Jerry on “The Bold and the Beautiful,” as Judge Byrd on “The Proud Family: Louder & Prouder,” as well as Judge Hawkins in the film “Amy’s F**k It List.”

On Aug. 1, the Opening Night Gala will be at Benton Convention Center with a parade of African drummers and dancers from the Otésha Creative Arts Ensemble, followed by a procession of more than 25 celebrities and an awards presentation.

The second part of the evening will feature “The Eve of Jackie (The Last Time),” starring Broadway performer and recording artist Chester Gregory, at UNC School of the Arts — Stevens Center.

A festival favorite over the years, this production, presented by Lucid Life LLC of Los Angeles marks the 20th anniversary and final performance of Chester Gregory as the legendary Jackie Wilson.

Other performances at the NBTF include “2 The Left — A Tribute to the Life of Lisa ‘Left Eye’ Lopes,” “Becoming Othello: A Black Girl’s Journey,” “Blood Done Sign My Name,” “Frederick Douglass: No Turning Back,” “Greenwood,” “I Wanna Be Evil: The Eartha Kitt Story,” “Let My People Go!,” “Ma Rainey’s Black Bottom,” “Michael Colyar’s Momma,” “Natural Woman: An Aretha Story,” “Pooled: A Gospel Musical Drama,” “Savior Samuel,” “The House of George” and “You Can’t Fake the Funk (A Journey Through Funk Music).”

A portrait of Hamlin and Sprinkle-Hamlin, known as Mr. and Mrs. Marvtastic, will be unveiled at the festival. Hattiloo Theatre in Memphis, Tenn., commissioned the portrait of the couple, which will be part of the “Black Theatre Royalty: Portraits from the Hattiloo Theatre Collection” exhibit from Aug. 1-27 in the Main Gallery at the Arts Council’s Milton Rhodes Center for the Arts. The exhibit, a collaboration with the Arts Council of Winston-Salem and Forsyth County, is on loan from Hattiloo.

Hamlin coined the hybrid word “Marvtastic.” It means “there is nothing greater or better.”

“We’ve got a LGBTQIA+ celebration called ‘Out on Holy Ground,’ which is three days of events of readings and workshops, and movie screenings,” Alexander said.

“In 2019, our city welcomed more than 60,000 festival attendees who were eager to enjoy live theatre as well as share their art with the community. And now it is back, and we look forward to seeing the city come to life with all the festival brings to our area.”

Jason Thiel, president of the Downtown Winston-Salem Partnership, also welcomes back the festival.

“We are very excited about having this wonderful event come back to downtown, and our businesses are eager to provide hospitality,” Thiel said. “We welcome this after the hiatus last year due to COVID.”

Richard Geiger, president of Visit Winston-Salem, said the event is Winston-Salem’s largest festival “and a premier cultural asset that shines a bright, national spotlight on Winston-Salem.”

“This year’s event is on pace to again attract a healthy influx of out-of-town visitors who stay overnight in our area hotels, dine in our incredible restaurants, shop at our stores and tour our museums and attractions,” Geiger said. “Many of the performances, events and hotel patrons are in the downtown area, but the caliber of positive national attention and economic boost generated by NBTF benefits us all.”

Mark Owens, president and chief executive of Greater Winston-Salem Inc., called the festival “one of Winston-Salem’s most important and impactful events, both culturally and economically.”

“It encompasses the entire community with events at venues all around town, so visitors really get to know the city,” Owens said. “That, in turn, raises the city’s profile on a national stage in a prominent way. The NBTF is a big part of Winston-Salem’s identity.”

What: The National Black Theatre Festival

Where: Various venues in Winston-Salem

More: NBTF has a partnership with artarie.com to stream about 30 events for $20, excluding plays because of royalty rights. 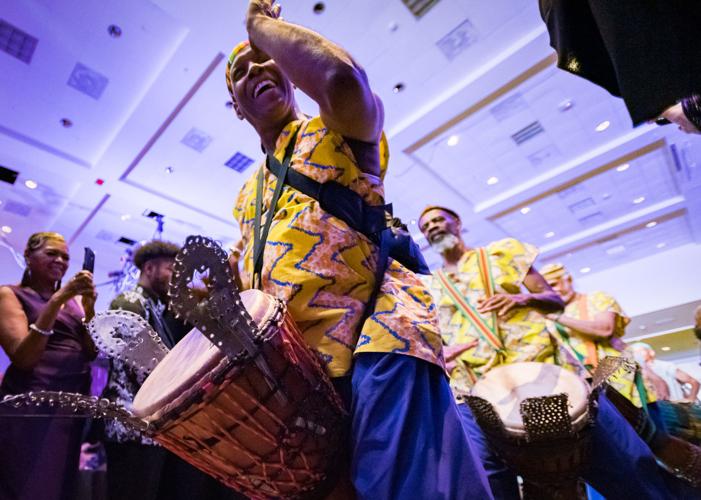 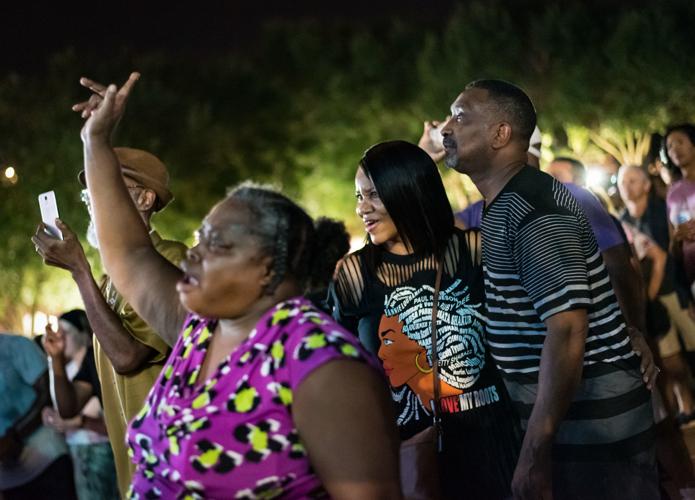 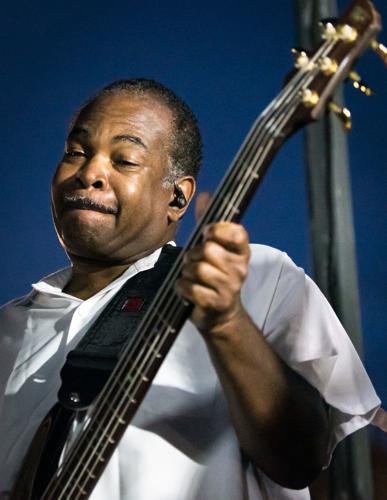 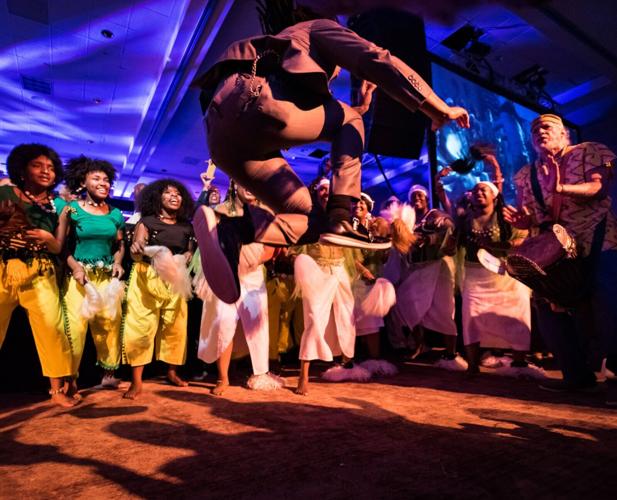 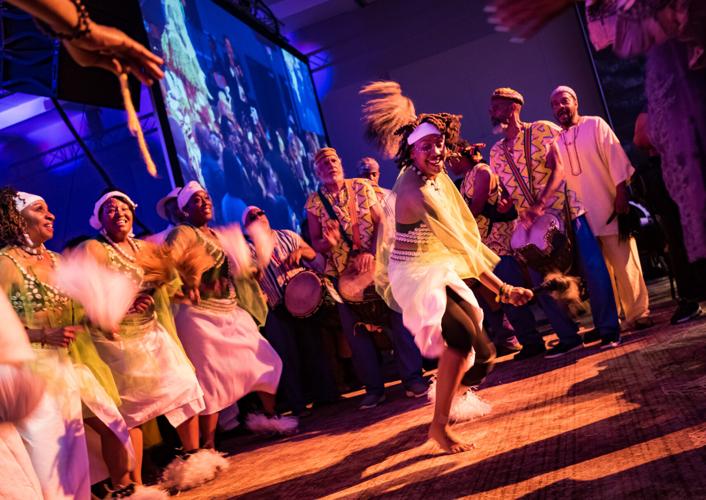 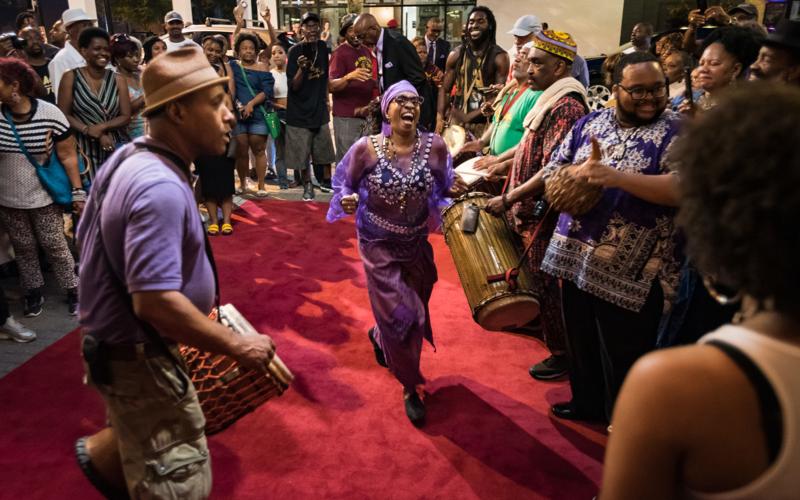 Dancers and drummers perform outside before “Jelly’s Last Jam” is performed during opening night of the National Black Theatre Festival in 2019 at the Stevens Center in Winston-Salem. 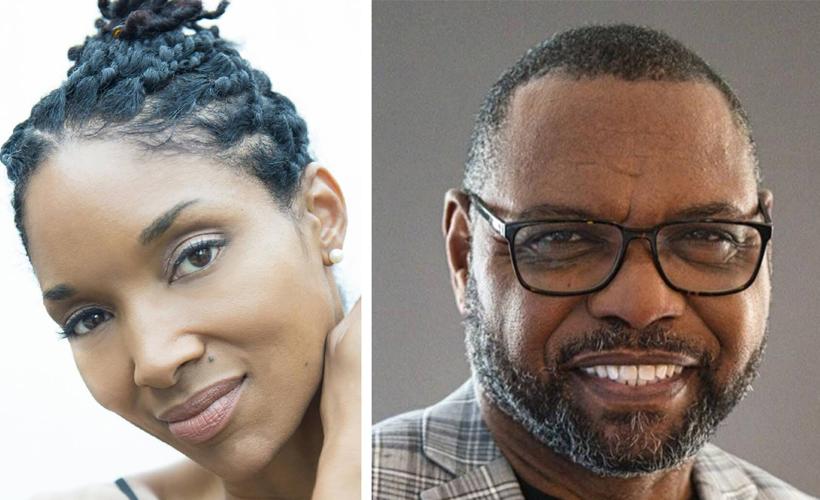