The downtown Greensboro theater was the dream of two Yale Drama School graduates.

After a long hiatus, Triad Stage is ready for its comeback.

The regional professional theater will reopen Tuesday after a 2½-year pause, caused by the COVID-19 pandemic and the sudden departure of its artistic director.

“We have had a long road,” said Sarah Hankins, its new artistic director.

Triad Stage will present the world premiere of “Rebellious” in its 300-seat Pyrle Theatre at 232 S. Elm St.

“Rebellious” will open in previews on Tuesday, with opening night on Friday. The production will run through Oct. 23.

The powerful play by North Carolina playwright Mike Wiley follows four Bennett College students through the sit-in movement, reignited just down the street at what used to be an F.W. Woolworth store, now the International Civil Rights Center & Museum.

The Bennett Belles must navigate the complexities of friendship, their growing sense of sense of self — and oppression as they face daily interactions in racially divided Greensboro.

They must decide if and how they will take a stand and be “Rebellious.”

“I am absolutely thrilled that we are reopening with ‘Rebellious,’ which so beautifully reflects our values and community,” Hankins said.

Patrons can buy tickets at triadstage.org. Expect part of the audience to be those who still had tickets when the theater closed.

“Rebellious” will be part of a season that consists of three plays, two concerts, a workshop and an effort to foster new, experimental work.

In addition to the comic plays “The Revolutionists” and “The Cake,” Triad Stage will present a holiday concert and Valentine’s cabaret.

It will also unveil “Jekyll,” a developmental workshop of a new female-focused contemporary adaptation of the gothic classic.

As the theater reopens, Triad Stage leaders have faced other hurdles.

“One of the major challenges has been operating with a staff about a quarter of the size we used to have,” Hankins explained. “We are being very intentional about slowly bringing on full-time folks in order to best steward our funds.”

Hankins served for four years as associate artistic director before the board appointed her to Lane’s post.

Triad Stage took root in 1998 when Yale graduates Lane and Richard Whittington arrived to start a nonprofit professional theater downtown. They raised more than $5 million and turned the former Montgomery Ward department store into a home base for Triad Stage. It opened in January 2002.

When: Tuesday through Oct. 23. Performance times are at 7:30 p.m. on select Tuesdays, Wednesdays and Thursdays, 8 p.m. on Friday and Saturday, and 2 p.m. on Saturdays and Sundays. Times are listed at triadstage.org.

Etc.: Masks are required for audience members. Cast and crew are tested regularly and perform without masks.

In 2017, Triad Stage received a $20,000 grant from the National Endowment for the Arts to commission the play from Wiley.

Inspired by Bennett alumna Linda B. Brown’s book, “The Belles of Liberty,” Wiley developed the script over two years with the support of Triad Stage, the NEA and a private donor.

Whittington left in June 2019, saying he wanted to spend more time with his family. He’s now associate vice chancellor for advancement at UNC School of the Arts.

In March 2020, the theater shut down as the pandemic hit and just before its production of “Pride and Prejudice” opened. The ban on large crowds prompted the venue to stop producing live theater, and take its plays, readings and concerts online.

An article published by Triad City Beat, an alternative weekly, reported that some UNCG male theater alumni accused Lane of sexual abuse — allegations that he has denied.

They said that the alleged abuse occurred while they were students at UNCG, where Lane taught acting and directing part-time until December 2019.

No criminal charges or civil lawsuits have been filed in Guilford County.

Triad Stage’s staff and board engaged in reorganization and reflection with help from arts consultant John McCann of Partners in Performance in Durham.

During the production hiatus, its board of trustees, Hankins and the theater’s small staff talked with supporters and the community about how to reshape the organization, tapping someone from the local theater scene as interim executive director.

Mitchel Sommers, the retired executive director of Community Theatre of Greensboro, started in August to oversee Triad Stage for about four months as it prepared to reopen.

For “Rebellious,” it brought in both familiar and well-known new faces.

Donna Bradby, a veteran of Triad Stage who teaches theater at N.C. A&T, will direct.

Donald Elise Watkins, a Greensboro native who has appeared in movies and television shows such as Amazon’s “Emergency” and “Underground Railroad,” will make his Triad Stage debut.

So will Hilda Willis (Atlanta’s True Colors Theatre) as Dr. Willa Player, the Bennett College president who supported students who took part in the sit-ins.

Local students and alumni from A&T and UNCG have also joined the cast.

In the last year while Triad Stage has been closed, a new downtown theater has appeared on the scene: the Steven Tanger Center for the Performing Arts. Sommers said he hopes that the Tanger Center’s presence brings more attention to Triad Stage.

When he sees a show at the Tanger Center, Sommers said, he notices that the community page in its program includes Triad Stage.

“Now the Tanger attendees who have the theater bug can come to Triad Stage for a different kind of professional theater experience,” Sommers said.

How Triad Stage got its start

The downtown Greensboro theater was the dream of two Yale Drama School graduates.

James Cameron admits that ‘Avatar: The Way of Water’ needs to make 2 billion dollars to break even

James Cameron admits that ‘Avatar: The Way of Water’ needs to make 2 billion dollars to break even 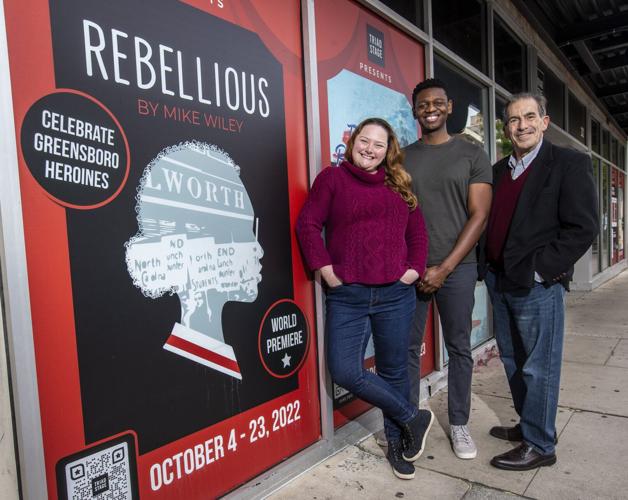 Victoria Pittman-Morris plays the lead, Berta, in “Rebellious” at Triad Stage. Triad Stage will present the world premiere of “Rebellious” in its 300-seat Pyrle Theatre at 232 S. Elm St. It will open in previews on Tuesday, with opening night on Friday. The production will run through Oct. 23.