Appearing in Community Theatre of Greensboro’s 26th annual production of “The Wizard of Oz” are, from left, Daniel Morrison, Joshua Thompson, Madison Barrier and Lark Mueller.

Appearing in Community Theatre of Greensboro's 26th annual production of "The Wizard of Oz" are, from left, Daniel Morrison, Joshua Thompson, Madison Barrier and Lark Mueller. 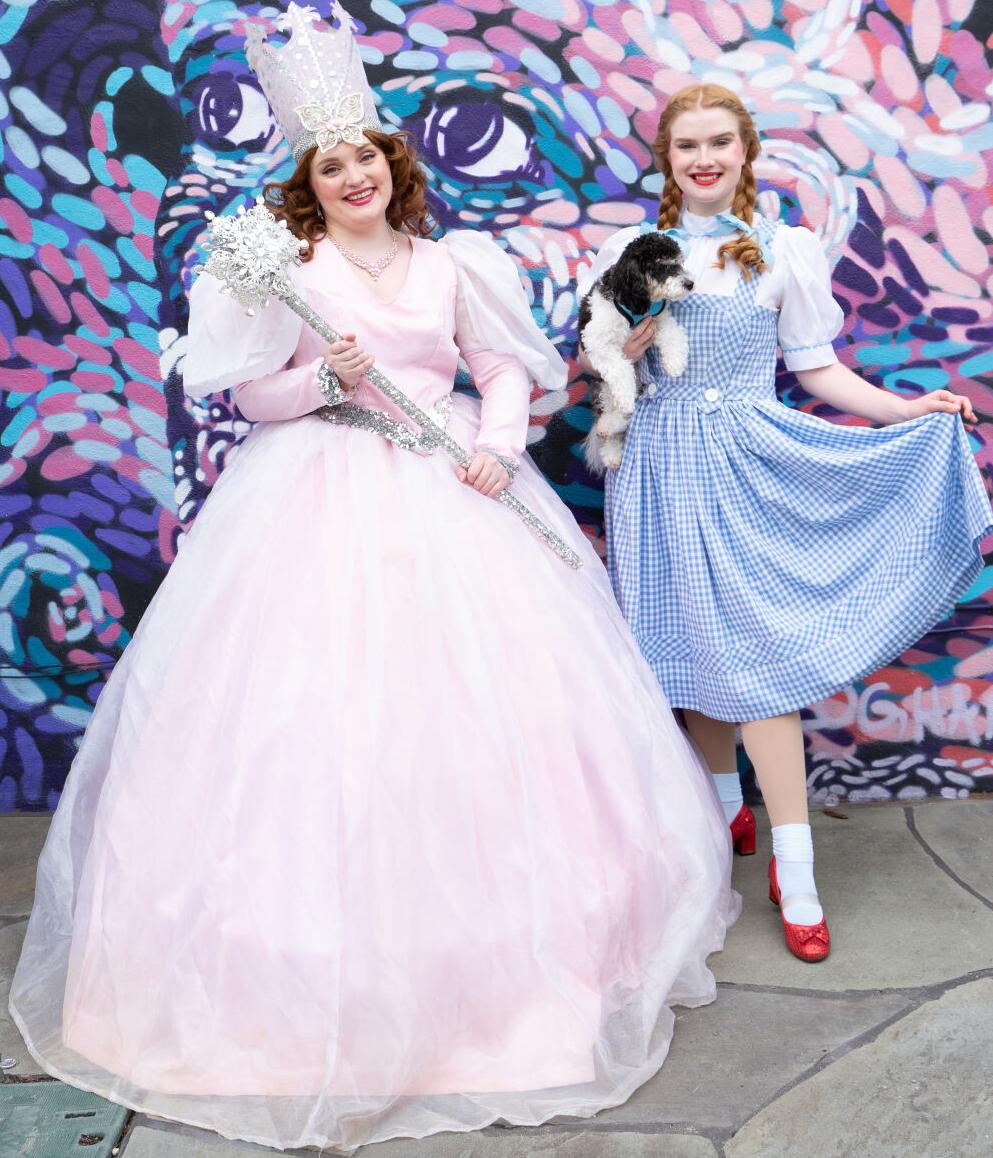 Alicia Reid, left, as Glinda and Madison Barrier as one of two actresses playing Dorothy in the 26th annual production of "The Wizard of Oz" by Community Theatre of Greensboro.

GREENSBORO — Madison Barrier is over the moon — err, rainbow — with delight.

Barrier will be one of two young actresses playing Dorothy in Community Theatre of Greensboro’s 26th annual production of “The Wizard of Oz” starting Nov. 13.

On Saturday, Barrier will sing the musical’s signature song, “Somewhere Over the Rainbow,” with the Greensboro Symphony and popular Broadway and television performer Matthew Morrison of “Glee” fame.

It will happen during Saturday night’s symphony concert at the new downtown Steven Tanger Center for the Performing Arts.

“It’s all exciting and overwhelming in a really good way,” said Barrier, 16, during a free period at High Point’s Penn-Griffin School for the Arts, where she is a junior. “Ever since the Tanger Center opened and I saw the ads and the flyers and everything, I was like, ‘Oh, my gosh. I want to perform there.’ It’s all coming together so soon. And it’s a lifelong dream to perform on a huge stage in front of so many people.”

Barrier remembers seeing Morrison as teacher Will Schuester on the Fox hit “Glee.”

“His voice. His dancing. His acting are phenomenal,” she said.

Barrier said that she and Morrison will sing the version of “Somewhere over the Rainbow” that appears on his 2011 album and in “Glee.” On YouTube, Morrison sings it with actress Gwyneth Paltrow.

“It’s more of an upbeat version of the song,” Barrier said. “I honestly love it. There’s a lot of harmony and it’s really just happy. And it’s beautiful.”

This marks the fourth year that Barrier has performed in CTG’s “The Wizard of Oz” — her first time as Dorothy.

It’s the only role that Barrier wanted when she auditioned. She shares it with Justice Reeves-Burke.

For the 1939 film starring Judy Garland, Harold Arlen composed the ballad with lyrics by Yip Harburg.

A 2001 survey by the National Endowment for the Arts and the Recording Industry Association of America named it the greatest song of the 20th century.

For Saturday night, Morrison’s management reached out to Lisa Crawford, Greensboro Symphony’s president and chief executive officer, to see whether she could find a local singer to perform the song with him. Crawford realized that CTG’s annual production of “The Wizard of Oz” would open the following week.

For 15 years, CTG has cast two actresses to play Dorothy. This year, they split six performances between them.

“We try to give as many young ladies as possible the opportunity for this role,” Fulton said.

Both did a wonderful job, Fulton said. But Morrison and his management had to choose one — and it was Barrier.

“I’m excited for Madison to have this opportunity to perform on the Tanger Center stage, and with someone she has seen on television,” Fulton said.

Barrier, of High Point, has performed in several theaters throughout the state. Among her favorite roles are Anna in “Frozen Jr.,” Violet in “Willy Wonka & The Chocolate Factory” and Nala in “The Lion King Jr.”

She majors in musical theater at Penn-Griffin, studying acting, singing and dancing.

She also has studied musical theater and voice at the UNC School of the Arts through the Acting Out program.

For five years, she has been part of CTG’s award-winning Centerstage Youth Performing Group.

In 2020, she won a Freddie G Outstanding Performance by an Individual at the Junior Theater Festival in California for her role as Anna in “Frozen Jr.”

Most recently, she was named as a top 10 female actress finalist through the Durham Performing Arts Center’s Triangle Rising Stars.

Barrier spends three to four hours each night rehearsing for “The Wizard of Oz.” Because she sings the original movie ballad in CTG’s musical, she is preparing to perform the different version with Morrison. Her chorus teacher at Penn-Griffin, her voice teacher and “Wizard” vocal director Jeannine Dumond are helping her.

She gets only one rehearsal with Morrison and the symphony the day of the concert.

“But I am wearing a blue dress,” she said.

What: 26th annual production of "The Wizard of Oz," presented by Community Theatre of Greensboro

Where: Carolina Theatre of Greensboro

What: Matthew Morrison in concert with the Greensboro Symphony Orchestra

Where: Steven Tanger Center for the Performing Arts

"Beautiful: The Carole King Musical," tells the story of the early life and career of the most successful female songwriter of the latter half of the 20th century in the United States.

Need performance space? Until Triad Stage reopens, it can be yours for a night.

The 300-seat theater in downtown Greensboro is available for rentals while its leaders plan for the reopening. "This is a good way for us to stay in the public view," said Justin Nichols, Triad Stage's patron engagement director.

Appearing in Community Theatre of Greensboro’s 26th annual production of “The Wizard of Oz” are, from left, Daniel Morrison, Joshua Thompson, Madison Barrier and Lark Mueller.

Appearing in Community Theatre of Greensboro's 26th annual production of "The Wizard of Oz" are, from left, Daniel Morrison, Joshua Thompson, Madison Barrier and Lark Mueller.

Alicia Reid, left, as Glinda and Madison Barrier as one of two actresses playing Dorothy in the 26th annual production of "The Wizard of Oz" by Community Theatre of Greensboro.