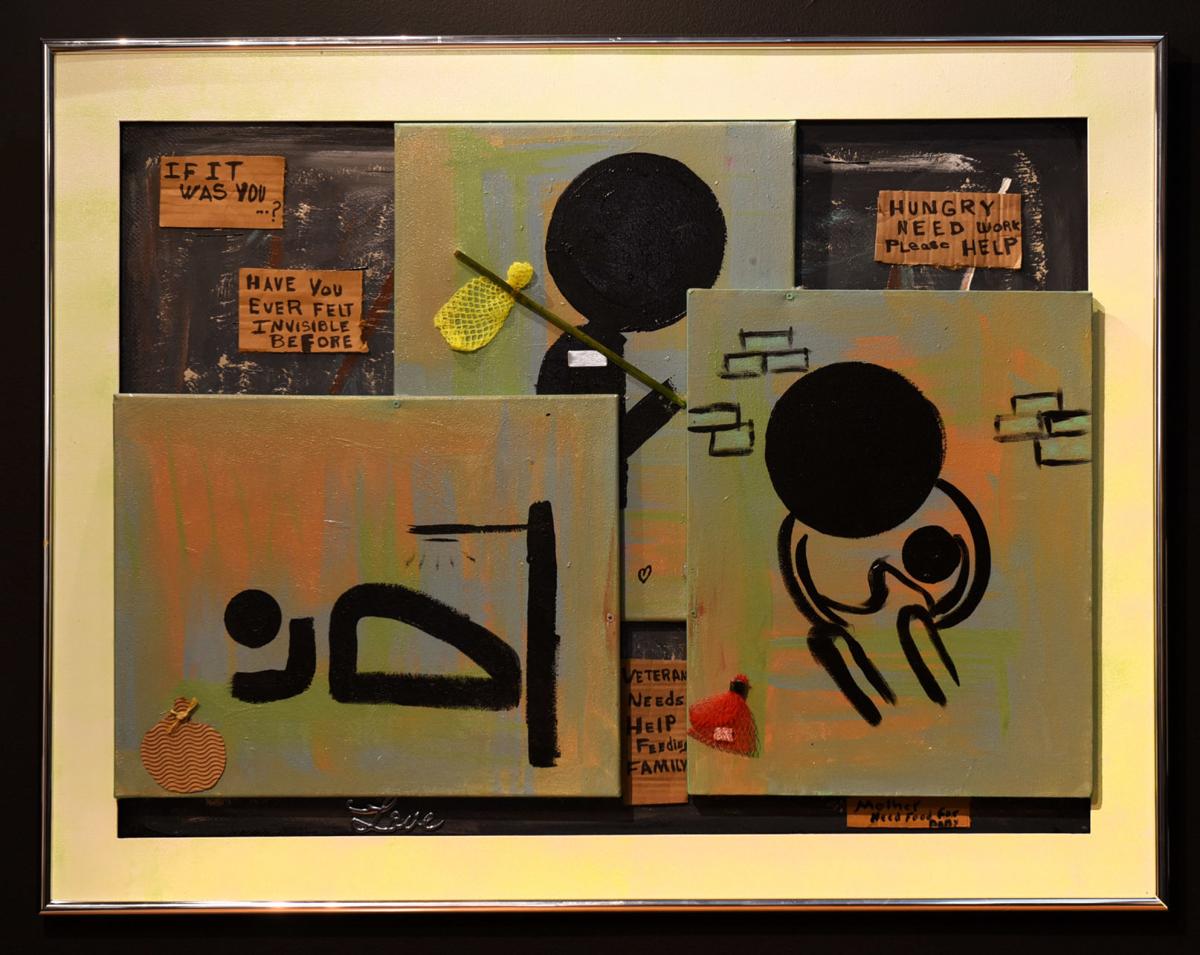 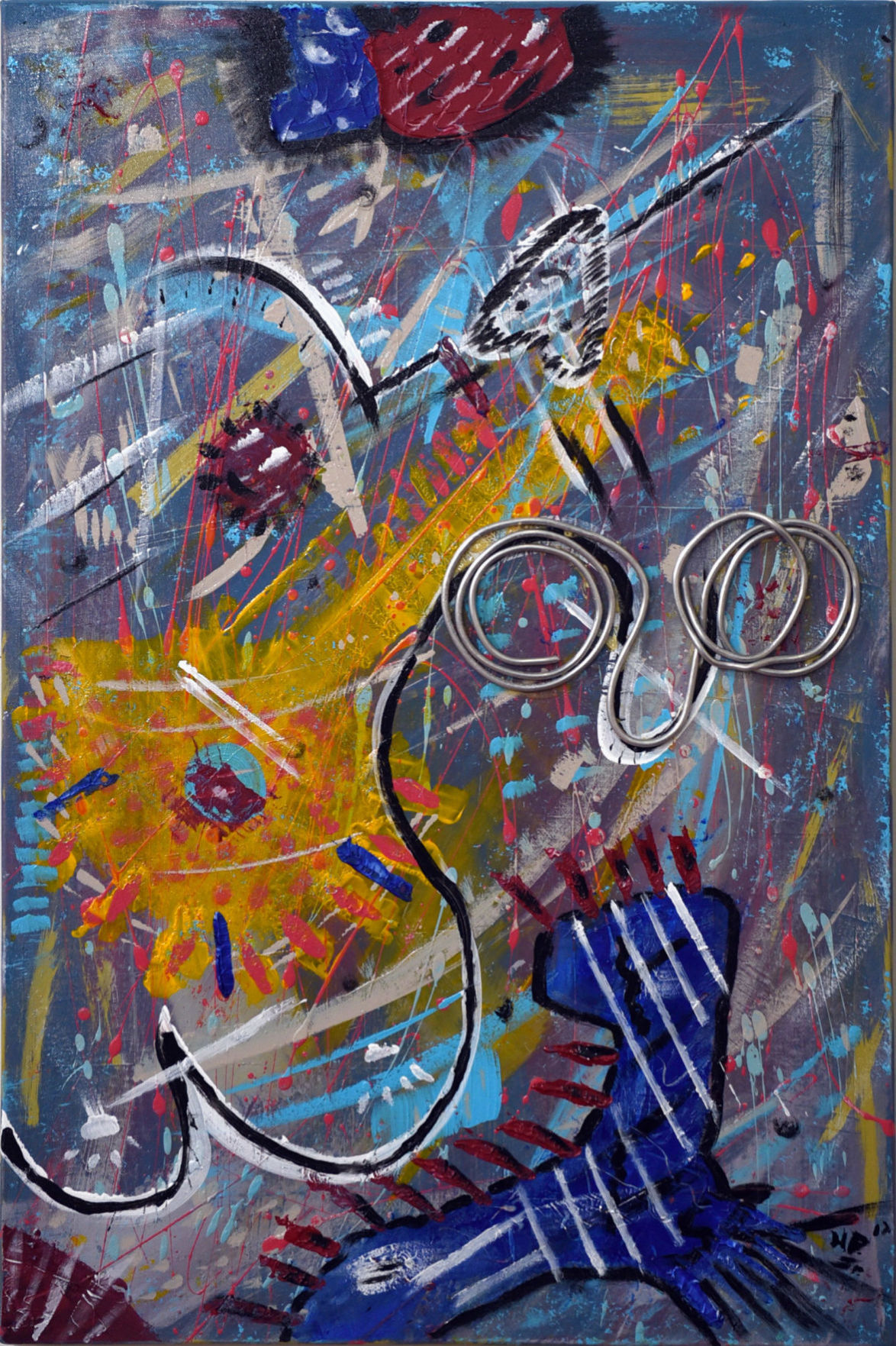 “Fluttering Vacation” (mixed media) by Hoyte Phifer is part of more than 40 acrylic and mixed-media paintings, augmented by 10 poems in simple frames, being displayed at the Delta Arts Center in Winston-Salem. 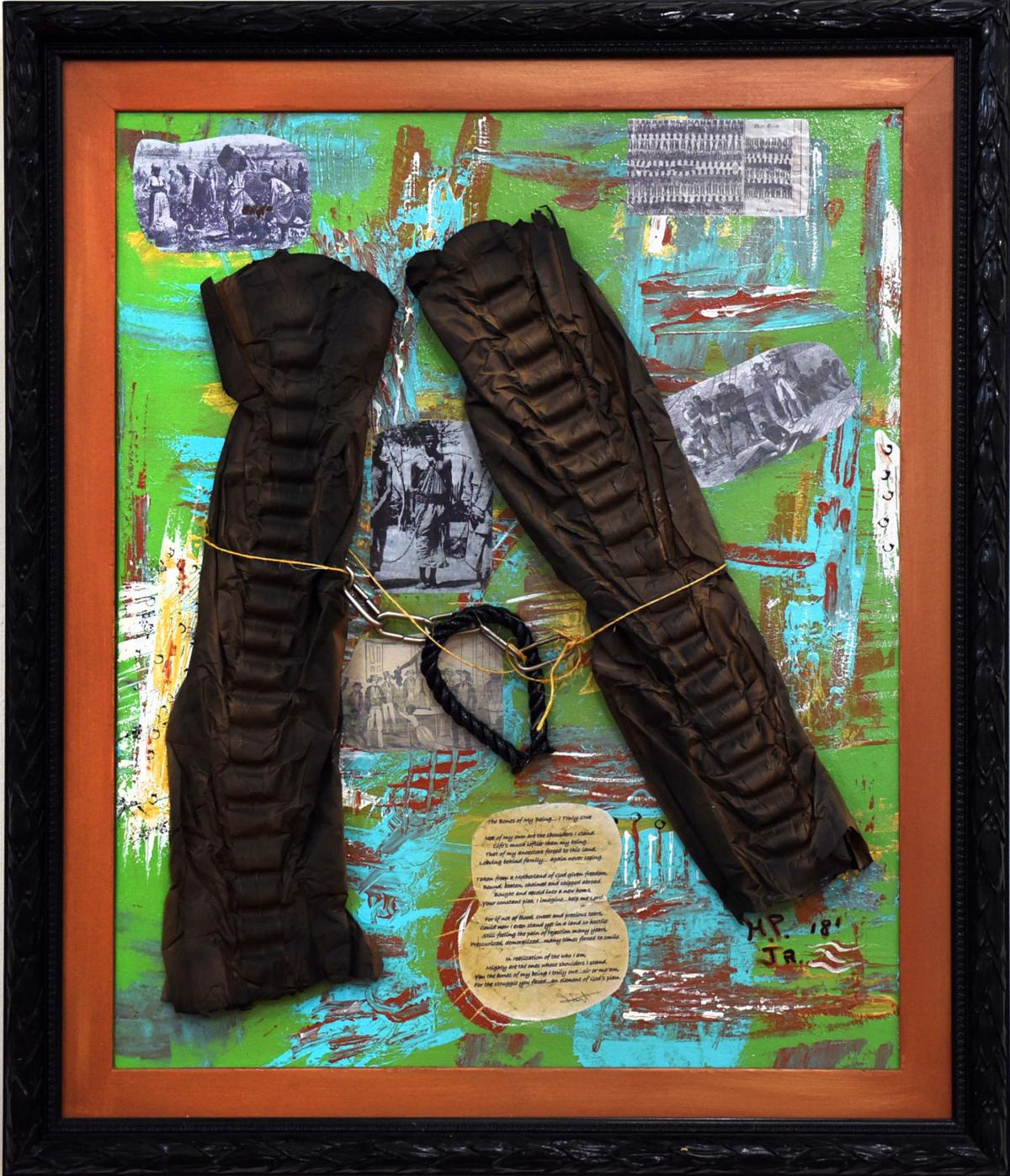 “Bones of Being” (mixed media) 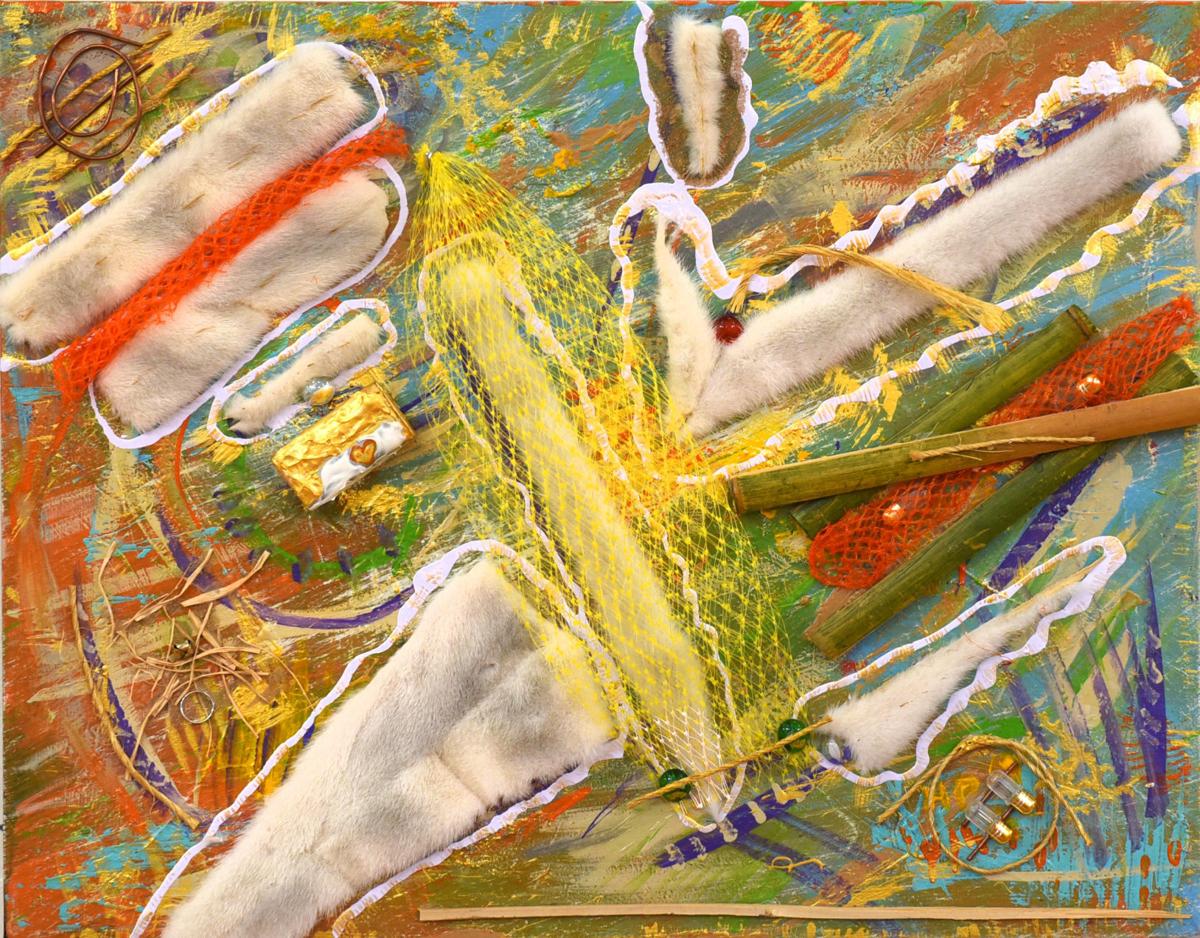 “Fluttering Vacation” (mixed media) by Hoyte Phifer is part of more than 40 acrylic and mixed-media paintings, augmented by 10 poems in simple frames, being displayed at the Delta Arts Center in Winston-Salem.

“Bones of Being” (mixed media)

WINSTON-SALEM — The title of Hoyte Phifer’s solo exhibition at the Delta Arts Center — “Release of the Untamed Mind” — emphasizes his self-taught status. Instead of being restrained by his lack of formal training in the fields of visual art and poetry, he treats it as a license for his creative autonomy.

The title also applies to Phifer’s uninhibited painting style and suggests an allusion to the volume of work he’s showing here. Delta’s gallery walls are filled with more than 40 of his acrylic and mixed-media paintings augmented by 10 of his poems displayed in simple frames.

Phifer, who lives in Greensboro, takes an abstract-expressionist approach in most of his paintings. Rather than trying to depict recognizable imagery, he makes loose, gestural markings or pours and drips paint to create free-form, abstract compositions. These paintings seem to be vehicles for his unfettered imagination, his deeper feelings and philosophical ideas too complex to be verbally summarized.

Many of them have an exuberant, whimsical quality, suggesting playful exercises in personal decompression. It’s doubtful he has any clear idea what they’ll look like until he’s stopped working on them, and in that sense they might be termed stream-of-consciousness paintings.

A case in point is “Stress Explosion,” at the center of which Phifer appears to have painted a blood-red orb that he uses as a kind of stage for passages of dripped and poured paint in several contrasting hues. The overall effect resembles an outer-space view of a red planet suffused with storm clouds, exploding chemicals, and sulfurous smoke. These forms are effectively set off against a predominately yellow ground accented with straight black lines that intersect at right angles.

This is one of several paintings in which Phifer sets up a dynamic tension between abstract-expressionism and geometric abstraction. Another example is “Aftermath,” whose geometric component consists of five discs that suggest mushroom spore prints or wheels with spokes.

The most distinctive works in Phifer’s show are those in which he augments his painted canvases with attached objects and contrasting materials. The pale, expressionistically painted surface of “Turbulent Secret,” for example, is largely covered with nylon mesh fabric, twine, bamboo sticks, globular glass ornaments, strips of pale fur and metal components, including a ring and a jingle bell, as well as a small box thickly coated with gold and white paint, perhaps containing the “secret.”

This painting hangs alongside Phifer’s variation on a modernist staple, the all-black painting. Simply titled “Black,” it’s a uniformly painted canvas texturally enlivened by what appears to be a raggedly shaped piece of paper that has been crumpled then partially flattened to vaguely suggest a topographical relief map with natural borders. Glued in place at the center of the canvas, it’s painted in the same glossy black as the canvas.

The most playful of Phifer’s mixed-media pieces is “Fluttering Vacation,” whose predominantly pink-hued, abstract-expressionist surface is streaked with pale, diagonal markings, curvilinear black shapes, a paddle-shaped burst of yellow and several black-outlined, white-streaked patches of green and blue. The dominant component amid all this visual cacophony is a piece of wire in the lower right quadrant, which has been wound and twisted to resemble two wide eyes on either side of a bulbous nose. It’s reminiscent of the stylized face peeking over a fence in the World-War-II-era graffiti icon “Kilroy was here.”

While much of the work in Phifer’s show tends toward the whimsically experimental, there are also a few pieces that reflect a socio-political turn of mind. In at least one case, “Signal of Poverty,” the title is the only clear indication of the painting’s theme. Otherwise it reads as yet another exercise in juxtaposing geometric forms with looser, more painterly abstract elements.

The show’s most overtly social-themed piece, “No Place … Like Home,” expresses sympathy for homeless people, depicted as stylized, black-painted figures. These figures — all with round, oversized, uniformly black heads — appear on three small, gray canvases that overlap on a larger canvas painted a darker shade of gray.

Collaged around the peripheries of these canvases are cutout box-cardboard rectangles bearing hand-lettered texts — miniature versions of the handmade signs often displayed by beggars at busy road intersections. “MOTHER NEEDS FOOD FOR BABY,” reads one of them. “VETERAN NEEDS HELP FEEDING FAMILY,” another announces.

In the lower left corner, the word “Love” appears in chrome-colored cursive letters, identical to the decorative, low-relief text attached to another painting at the opposite end of the gallery.

The legacy of slavery in this country is the subject of Phifer’s mixed-media piece titled “Bones of Being.” Collaged on a canvas otherwise painted with pale, abstract-expressionist markings are vintage photographs and illustrations depicting some of the hardships and deprivations endured by enslaved African Americans before the 20th century.

Attached in an A-shaped configuration at the center of the piece are two black, plastic objects resembling automobile tire treads, attached to each other by a chain with a smaller black horseshoe-shaped object. And collaged in the lower center is a printed copy of Phifer’s related poem, “The Bones of My Being,” which also appears as a framed typescript displayed alongside this piece.

Paying homage to Phifer’s enslaved ancestors, the poem includes lines such as: “For if not of blood, sweat and precious tears / could I now stand yet in a land so hostile / Still, feeling the pain of rejection many years, / Pressurized, demoralized … Many times forced to smile.”

What: “Release of the Untamed Mind”