Thomas Perry, author of "Beyond Mayberry" 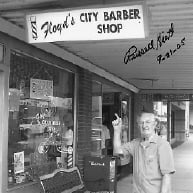 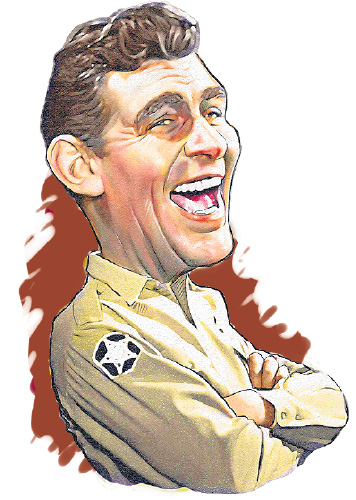 By Jo Maeder
Special to the News & Record

“I was born in the Northern Hospital of Surry County in Mount Airy, North Carolina,” writes Thomas D. Perry, “just down the hill and within sight of the home where Andy Griffith spent most of his time growing up and where he returned in 2002 to spend the night before Highway 52 became The Andy Griffith Parkway.”

Perry is a historian and historical preservationist. He was born in 1960, the same year “The Andy Griffith Show” debuted.

Reared and still living in Ararat, Va., only 10 miles away from Mount Airy, he’s also the owner of Laurel Hill Publishing. Perry has written, edited or published 35 books on this region’s history.

“Beyond Mayberry: A Memoir of Andy Griffith and Mount Airy, North Carolina”

is partly a memoir, partly a tour book of Mount Airy (about an hour from Greensboro), and partly an extensively researched biography of his hometown’s most famous native son. Griffith died on July 3, in Manteo.

Perry spoke about the book and his affection for Andy and Mayberry in a recent interview.

You say Andy Griffith never said for sure that Mayberry was based on Mount Airy. His cagey reply when asked was, “It sure sounds like it, doesn’t it?” Could you address the controversy over where the “real” Mayberry is located?

In Jerry Bledsoe’s book about biking the Blue Ridge Parkway, he tells about visiting the Mayberry Trading Post (in Mayberry, Va., 22 miles northeast of Mount Airy) and Addie Wood, the owner, telling him about Andy visiting the place as a kid. In Andy’s papers at UNC-Chapel Hill, he had a photocopy of the related pages and the paragraph I mentioned above was circled without comment.

You can read into that maybe that Andy was pleased to see that. I think his visits to Mayberry, Va., were a pleasant memory of his youth with his mother’s family from Patrick County, where his mother, Geneva Nunn Griffith, was from, but that is just my opinion.

What do you think are the general public’s biggest misconceptions about Griffith?

I think many people assume that Andy Griffith was Sheriff Andy Taylor. He was not.

I came to believe that Andy Taylor was Carl Griffith, Andy’s father, who was a great storyteller and who Andy’s first wife said was “the funniest man I ever knew” — and she was married to Andy Griffith. Andy Griffith was a serious actor and he was playing a role. In real life, he was not as approachable as the character he played.

You wrote this book while recovering from surgery for prostate cancer that has some side effects, while generally temporary, that could throw any man into a depression. How did writing help you through that time?

I had surgery in February 2012 and, when Andy Griffith died in July, I was struggling to start work again. I used the laughter from the show to heal, but it was a subject that I knew and that made it easier to write about something so close to home for myself, too. Prostate cancer for men is not easy, but I had robotic surgery (at Wake Forest Baptist Medical Center) in Winston-Salem and am now almost fully functional again.

“The Andy Griffith Show” has proven to be a timeless classic for all ages. Why?

“The Andy Griffith Show” was one of the funniest shows ever on television, especially when Don Knotts was on it. I think Andy took Mount Airy with him into the show and that made it real. Part of the appeal of the show is that it is taken from real life.

What were the most unexpected discoveries you made about yourself and Andy Griffith while writing or promoting “Beyond Mayberry”?

“The thing about Andy that I did not realize was how much a product of his parents he became. He got his musical ability from his mother’s side and his storytelling from his father Carl, and probably the acting.

“As for myself, I was surprised at how much pride I began to feel for being from the same place as Andy Griffith. He received a Medal of Freedom from President George W. Bush and, if you look at the ceremony, you can see the joy Andy Griffith had in his face. It is the first thing in the book because I don’t think we will see anyone from Mount Airy getting one of those again any time soon and I came to feel what a memorable event that was for Andy Griffith and Mount Airy.”

“Beyond Mayberry” is loaded with such details as a mention of a birthmark on the back of Andy’s head that his mother called “Andy’s strawberry patch.” And that he swept buildings for $6 a week to buy his first trombone. You also delve into his parents’ and grandparents’ past. You pored over old records in libraries and courthouses. Had this book been marinating inside you for a while?

It had been on my mind for a long time since I found the marriage certificate of Andy’s parents in the Patrick County, Va., courthouse. When he passed in July, I escalated my efforts. This book was easy to write as I grew up near Mount Airy and, like most people my age, Andy was part of my life from as long as I could remember. The reception of this book has been amazing.

Thomas Perry, author of "Beyond Mayberry"