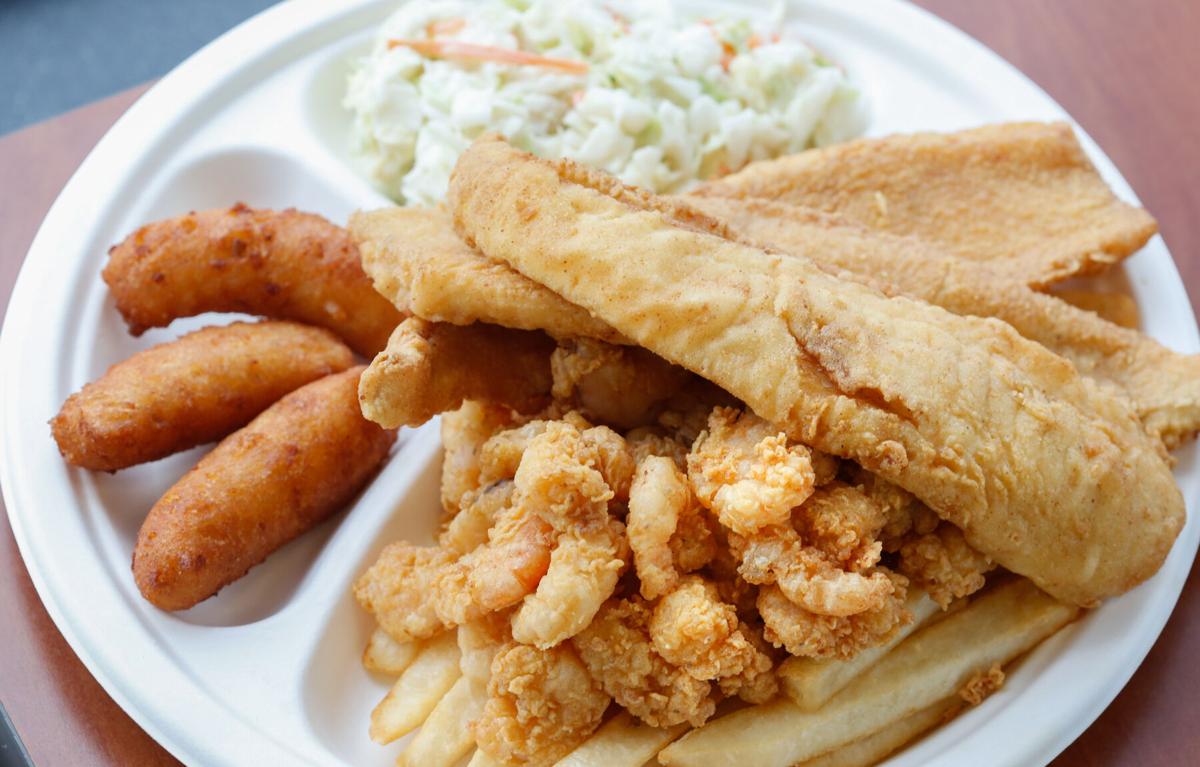 The fired shrimp and flounder platter at Carolina Fish Fry Co. in Greensboro. The new franchise concept is a fast-food version of Calabash seafood. 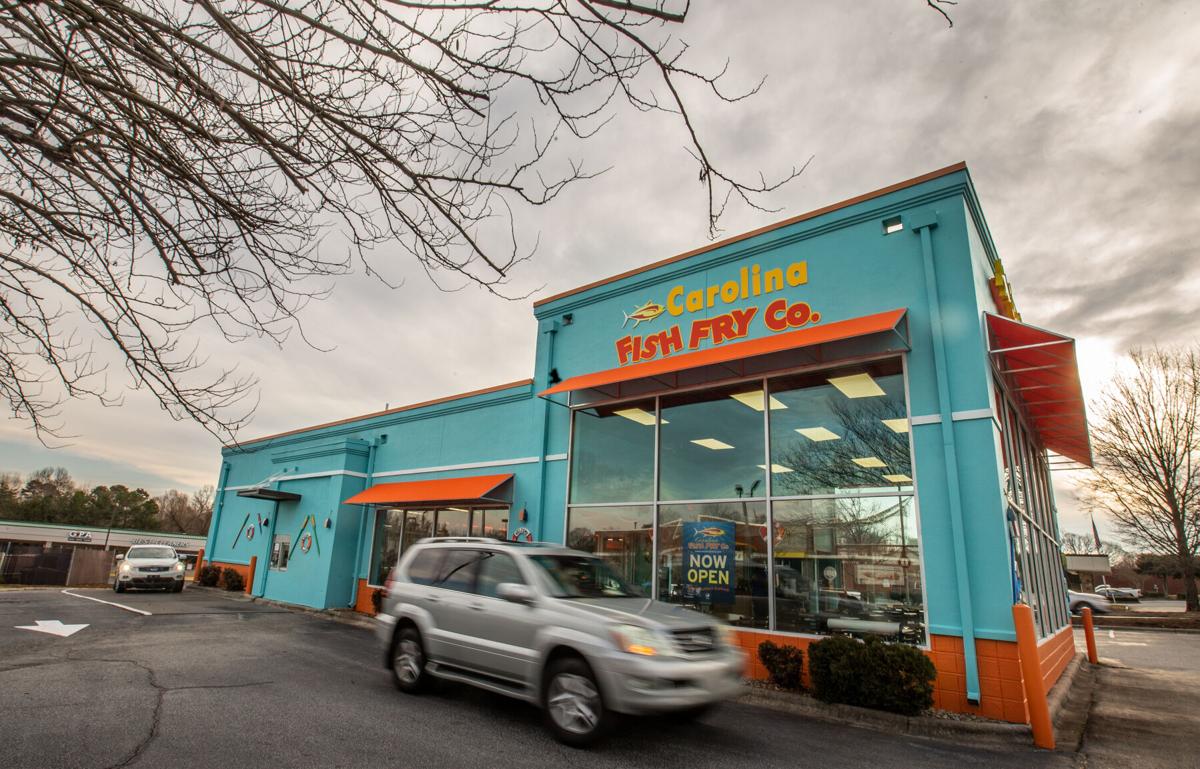 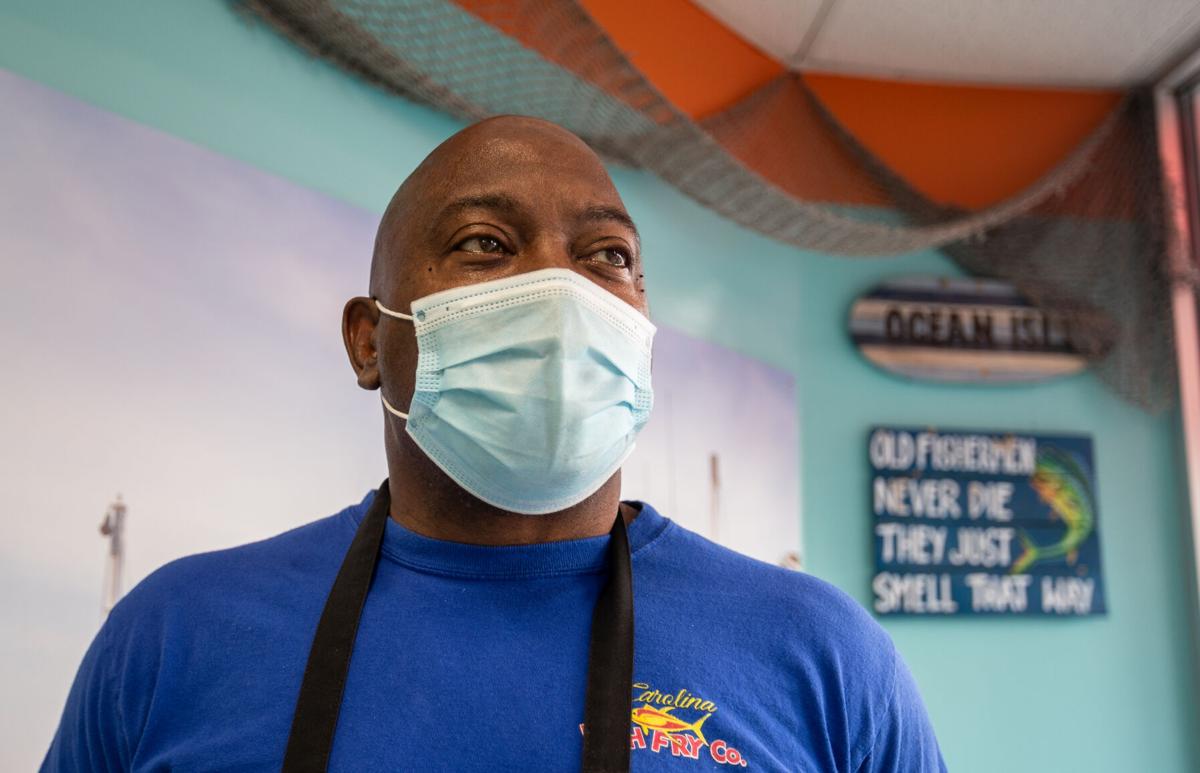 Roland Dobson, who has the franchise with his wife, Bonnie, has more than 20 years’ experience in the restaurant business, including 10 years with Golden Corral. 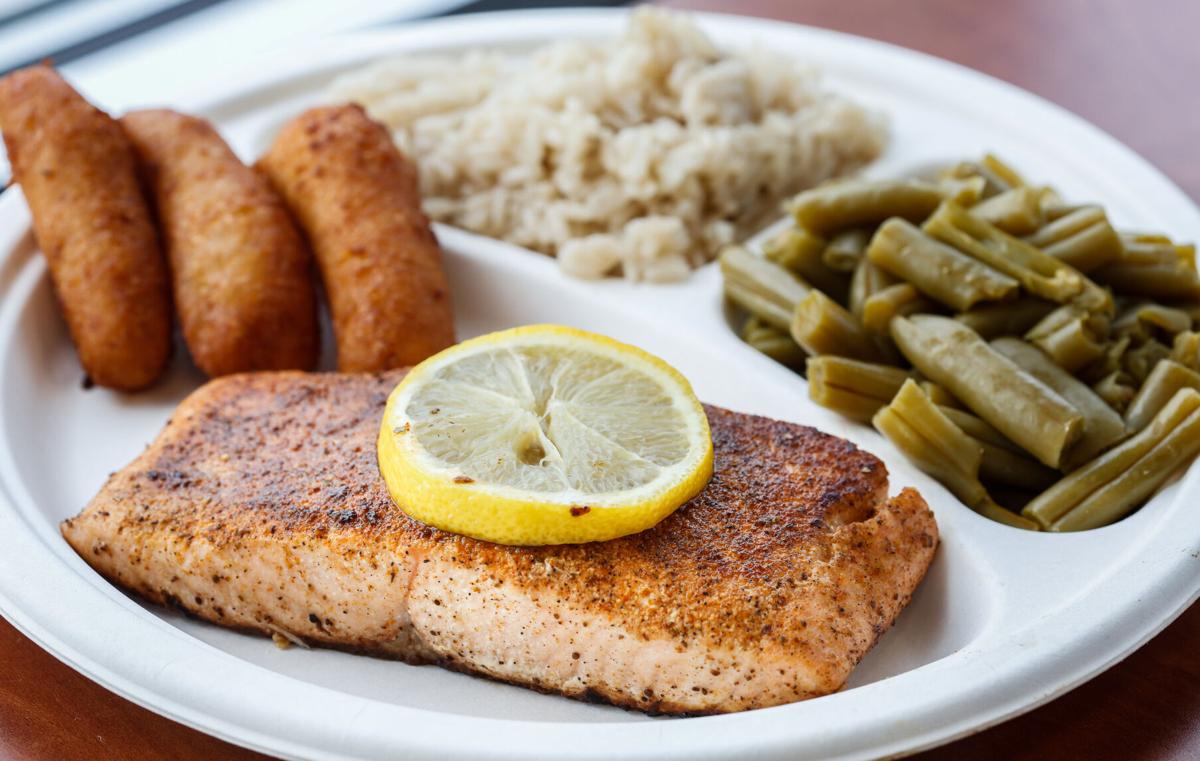 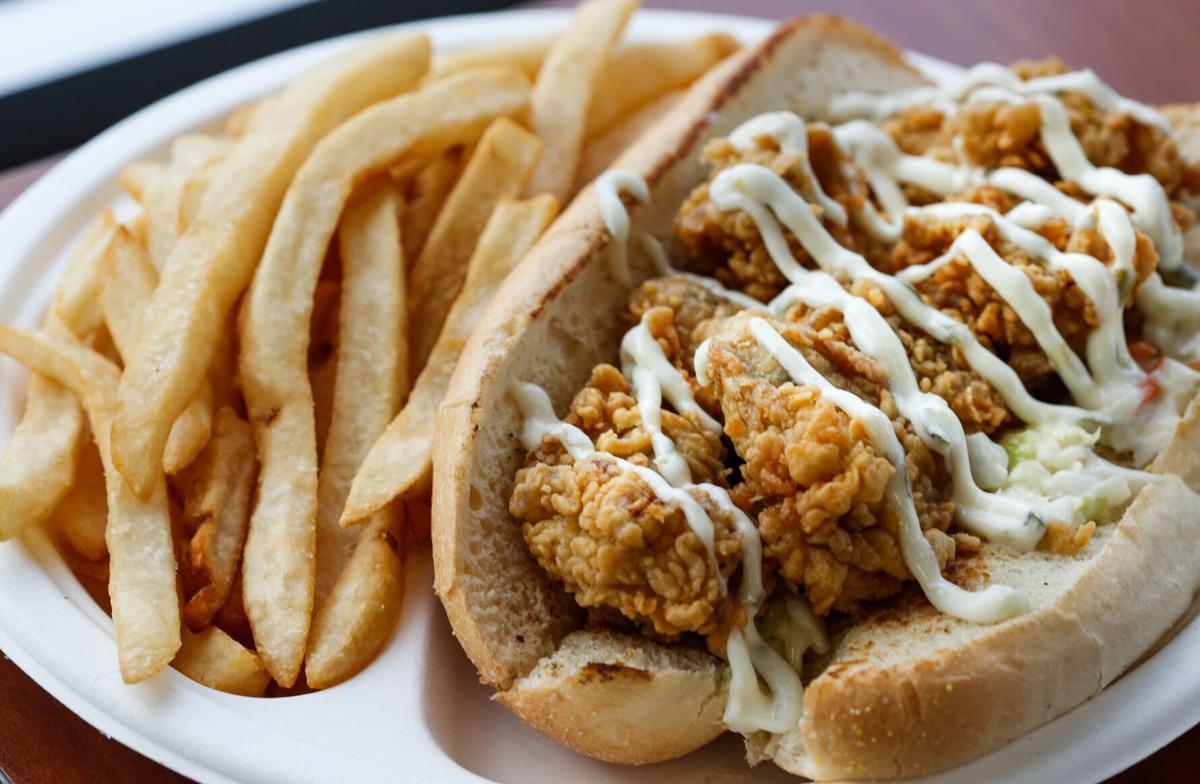 The Oyster Po'Boy at Carolina Fish Fry Co. which hand breads and cooks all of its seafood to order. 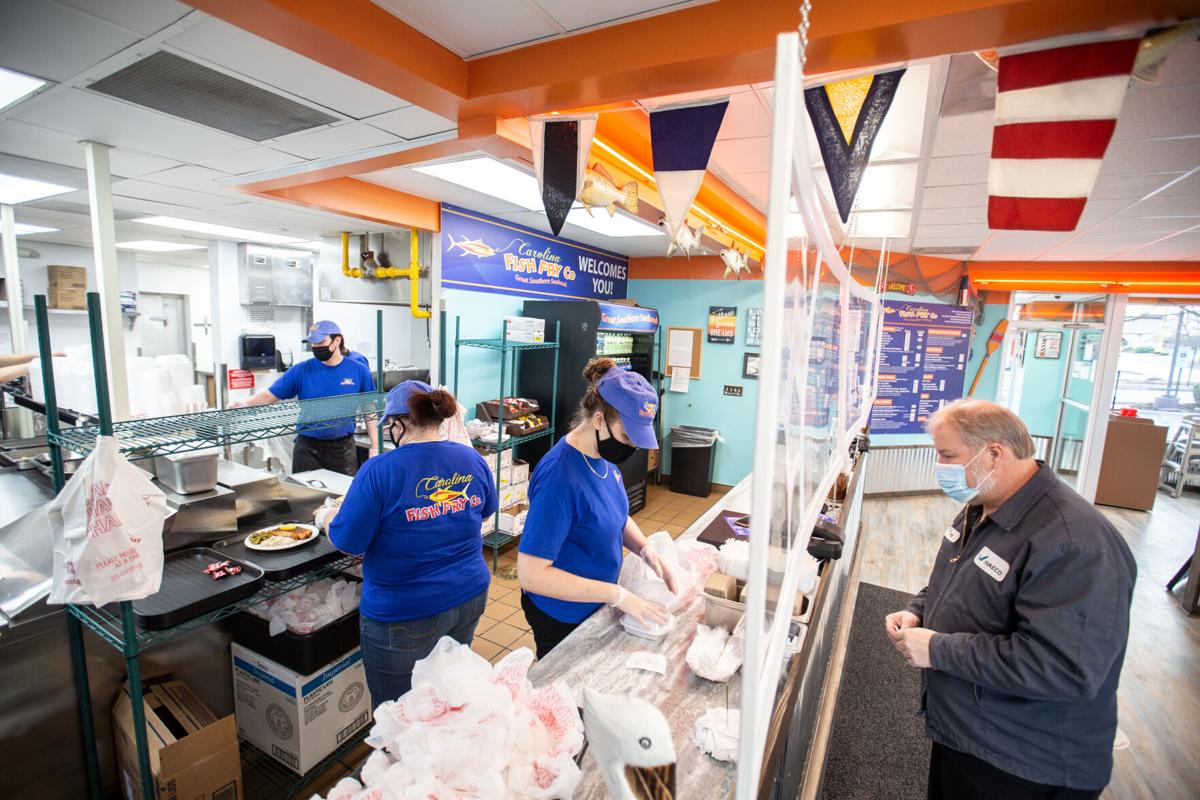 Carolina Fish Fry Co., a new franchise concept, has opened at 5705 Inman Road in Greensboro, and another location is expected to open soon in Burlington.

“My dad has been in the restaurant business since 1986,” said Sam’s son Stephen Karos, the company’s director of operation. “He had four restaurants at one point. But during the recession of ’08-’09 when folks were not traveling as much, he took a step back and thought about how to provide great seafood meals to families and not break the bank. He wanted to make it more accessible.”

Thus the concept of Carolina Fish Fry was born, a fast-food version of Calabash seafood.

Sam Karos tried out that concept first in Loris, S.C., about a half-hour inland from Myrtle Beach, then he moved the company’s flagship store to Garner, N.C.

The first franchise opened in Wilmington in 2015, and now, the company is in expansion mode.

The Greensboro franchisees are Bonnie and Roland Dobson. Roland Dobson has more than 20 years’ experience in the restaurant business, including 10 years with Golden Corral.

Dobson and Stephen Karos were both working for Golden Corral last spring when the COVID-19 pandemic forced the chain to close down. Like many other restaurants that focused on buffets, Golden Corral was especially hard hit by the pandemic.

That’s when Stephen Karos went to work for his father on a concept that was more favorable to the new normal of customers’ eating habits. Specifically, Carolina Fish Fry has a takeout-friendly menu. It also has a drive-thru, something that has appealed to customers nervous about going inside a restaurant.

“About 70% of our business has been takeout in the Greensboro restaurant’s first four weeks,” Roland Dobson said.

The company also offers online ordering directly from its website, and that, too, has been very popular.

Carolina Fish Fry hand breads and cooks all of its seafood to order. Much of the menu mirrors the standard Calabash menu of fried flounder, popcorn shrimp and other seafood fare. But it does have a few nonbreaded grilled items, as well as a cheeseburger, chicken sandwich and chicken tenders.

The top price on the menu is $31.99 for a family package that includes 1 pound of popcorn shrimp, 10 pieces of flounder and family-size containers of fries, hush puppies and slaw, plus a half-gallon of iced tea.

Baskets with 5 to 6 ounces of seafood and three sides run from $5.99 for Alaskan pollock, clam strips or deviled crab to $8.99 for fried jumbo shrimp.

Po’boy sandwiches are $5.99 for flounder, Alaskan pollock or shrimp, or market price for oysters.

Platters with 10 to 12 ounces of seafood and three sides are available with most types of seafood. One of the most popular items is a two-seafood combination platter for $10.99.

Carolina Fish Fry is in the Cardinal Crossing shopping center — in a former Taco Bell/Pizza Hut combination building that last housed a bagel place called Rocki’s Eatery and Café — between the Battleground Avenue area and the airport. The FedEx hub is only a mile away, and the area is surrounded by residential developments.

He’s banking that those people carry the same kind of fond memories that he has for Calabash seafood.

“When I was in college, me and my buddies would go to Myrtle Beach for spring break,” Dobson said. “We didn’t have much money then so we would go to the Calabash buffets, and that would be our main meal. I just love the food.”

The company expects to open in February at 3120 Garden Road in Burlington. Another opening is planned this year in Smithfield.

Stephen Karos said that Carolina Fish Fry is focused on recreating Calabash seafood at a value price. In other words, its goal is to offer quality fresh seafood with a business model that keeps labor, overhead and consumer prices low.

“The best compliment we get is, ‘This tastes just like what we get at the beach,’” Karos said. “We want to bring the Calabash beach experience to communities all over North Carolina.”

The fired shrimp and flounder platter at Carolina Fish Fry Co. in Greensboro. The new franchise concept is a fast-food version of Calabash seafood.

Roland Dobson, who has the franchise with his wife, Bonnie, has more than 20 years’ experience in the restaurant business, including 10 years with Golden Corral.

The Oyster Po'Boy at Carolina Fish Fry Co. which hand breads and cooks all of its seafood to order.