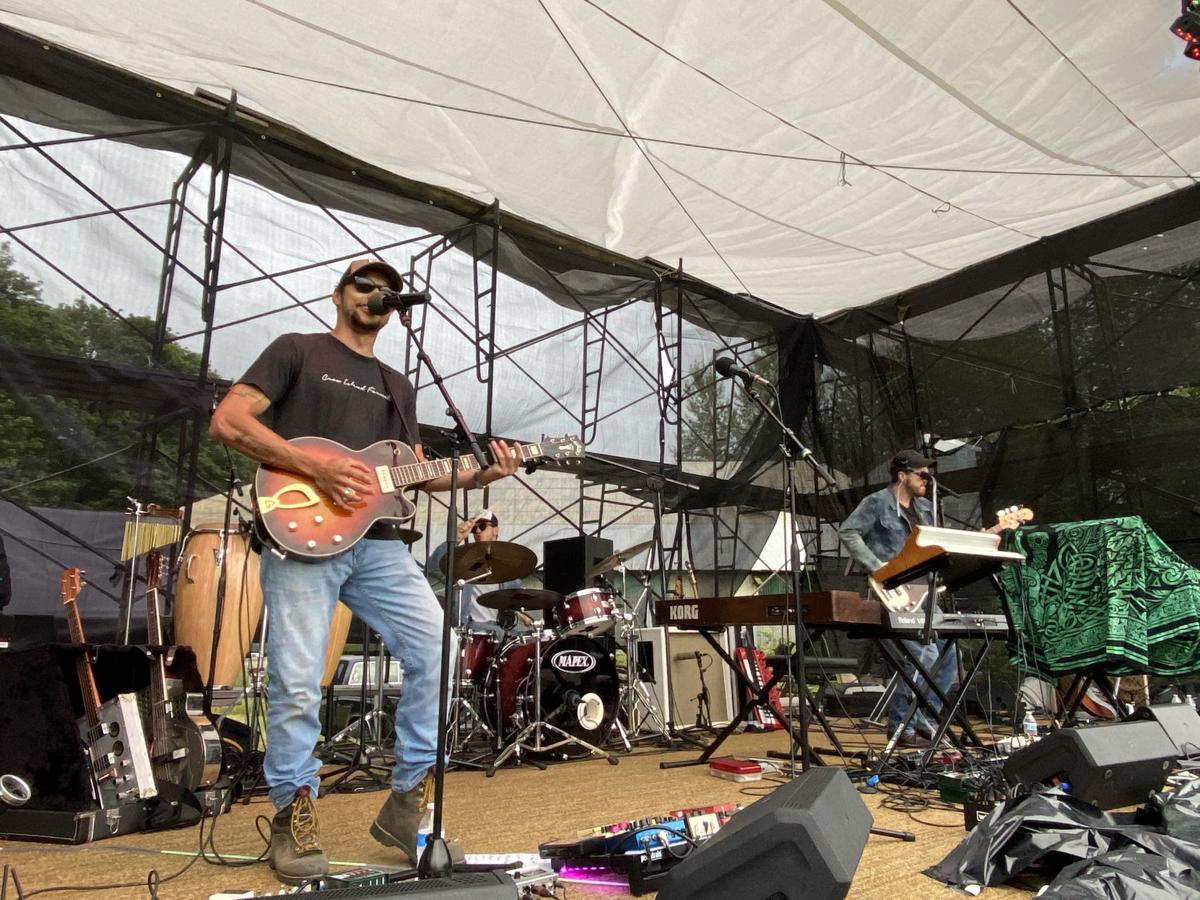 Since COVID-19 hit, bluesman Brett Benton has lost dozens of gigs, forcing him to find other work. “Man, it feels great to be back onstage. It’s what I do for a living,” said Benton (left) after his set. “Or what I was doing for a living, I should say.” 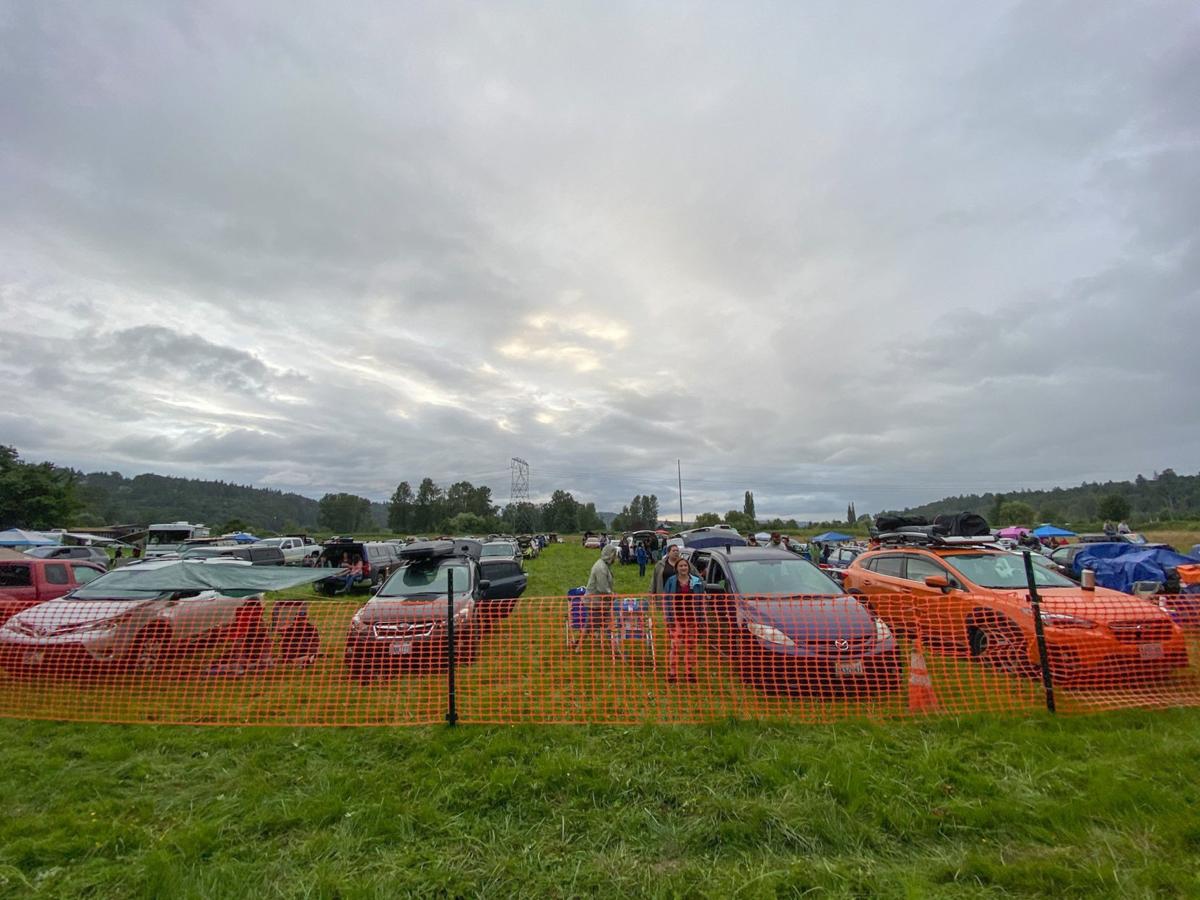 About 130 carloads of music fans attended one of Washington's first drive-in concerts on July 11.

By Michael Rietmulder The Seattle Times

CARNATION, Wash. — The camp chair brigade turned out in force.

Deep in the Snoqualmie Valley, about 130 cars drove down a winding dirt road last Saturday, past the “DANGER FARM OPERATIONS” sign and into a grassy clearing for one of Washington’s first drive-in concerts. The more industrious fans loaded up coolers and set up in truck beds or perched atop vans to get a better view of the rusty stage over the rows of cars in front of them. One RV-driving crew kept warm by a portable fire pit as the sun went down.

Light projections danced across a weathered barn beside the stage as local jam-funk rippers Cytrus blazed through a set of disco-kissed party-starters under the stars, fans listening through their car radios like a drive-in movie. It felt like someone plopped a stage into a festival parking lot, with a BYOEverything policy supplanting overpriced concessions. A crew of a dozen or so volunteers and hired security sanitized portable toilets between every use and ensured that fans, for the most part, kept to the immediate area around their vehicles.

Welcome to the concert industry in the age of COVID-19. As the novelty of the livestream concert has faded, a number of bands and promoters have begun exploring drive-in concerts as a socially distanced answer to the statewide moratorium on club shows.

Count Ashley Haight as a fan. Car stocked with chips and Gatorade, the 26-year-old and her husband drove an hour and a half to attend the so-called “Field of Dreams” concert on a private farm in Carnation. “You still get live music and the experience of the concert, but even in these weird times, you feel good about it,” said Haight, a friend of the band. “Everybody wants to leave their friggin’ house.”

Cytrus and co-promoter Morgan Henley started talking about doing a drive-in show after a similar event in Denmark made international headlines. Henley began scouting locations, landing upon the Carnation farm where he’d thrown a handful of small festivals in the past.

A roughly 20-yard buffer was fenced off between the stage and the first row of cars, ensuring people wouldn’t crowd the stage when the bands fired up. Broadcasting the music through FM radio instead of speakers facing the crowd was also designed to keep fans tethered to their cars, organizers said.

“My hope is that moving forward with drive-ins, fans understand how crucial their role is in these continuing to be a thing,” Cytrus guitarist Jared Squires said.

Even if every fan plays by the rules, the extent to which drive-in concerts will proliferate remains to be seen.

Drive-in movies and concerts are allowed under several states’ Phase Two reopening plan (including North Carolina), provided performers are socially distanced and “wear appropriate PPE.” Fans are required to remain in their vehicles unless going to the restroom or concession areas.

Haight, the Cytrus fan, and others at the Carnation show said they would readily attend future drive-in concerts and that they felt comfortable with the precautions in place. Seattle’s Tina Lugo hailed it as a creative way to bring people together and support artists during these unprecedented circumstances.

“It’s definitely different, but I still feel that there’s a community aspect to it,” said Lugo, who came with her quarantine group. “I feel like everyone’s showing up for each other and acknowledging each other and being kind. I’m pretty stoked to be around other people and I’m feeling that from others as well.”

While a return to live music, in some form, is a welcome taste of life before lockdown, the event — which charged $50 per vehicle — wasn’t without its quirks. Though the radio frequency was clear, the sound quality was only as good as your car stereo (or your neighbors’) and sightlines could be tricky depending on your spot. From the back, it was tough to see the stage when seated inside an SUV, and outside, the sound delay coming off the stage clashed with the radio broadcast.

For opener Brett Benton, last Saturday’s drive-in concert was the first time he’d played with his band since February. After logging nearly 190 shows last year, the Southern-fried bluesman has turned to work in the cannabis industry since the pandemic cleared his spring and summer calendar. Standing out in the crowd as Cytrus took the stage, Benton said being at the show put him in “one of the best moods I’ve been in a long time.”

“Music is made for all of us to feed off the energy of each other,” Benton said. “I knew the energy was there to an extent because everybody’s honking their horns and flashing their lights and everything, or you hear people screaming. But it’s not the same as having a big crowd of people in front of you.”

Still, it’s something. Before the show, Henley, the promoter, said the industry needs to keep thinking creatively about ways to connect fans with live music. If all went well, he said he’d look at putting on more drive-ins this summer.

“I mean, we gotta do something, you know?” Henley said. “The way that society’s going right now, live music could definitely give us a little bit of positivity, remind us of the good things in life that we strive to be a part of.”

Here are upcoming shows near Greensboro:

Since COVID-19 hit, bluesman Brett Benton has lost dozens of gigs, forcing him to find other work. “Man, it feels great to be back onstage. It’s what I do for a living,” said Benton (left) after his set. “Or what I was doing for a living, I should say.”

About 130 carloads of music fans attended one of Washington's first drive-in concerts on July 11.