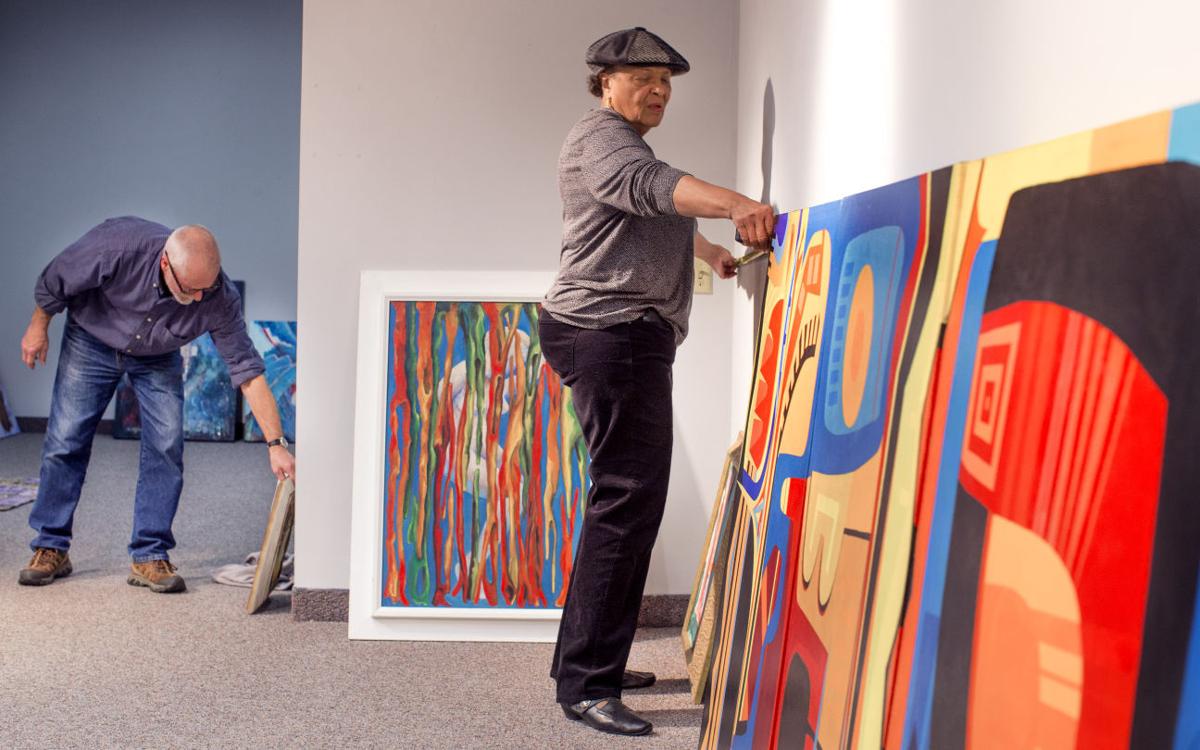 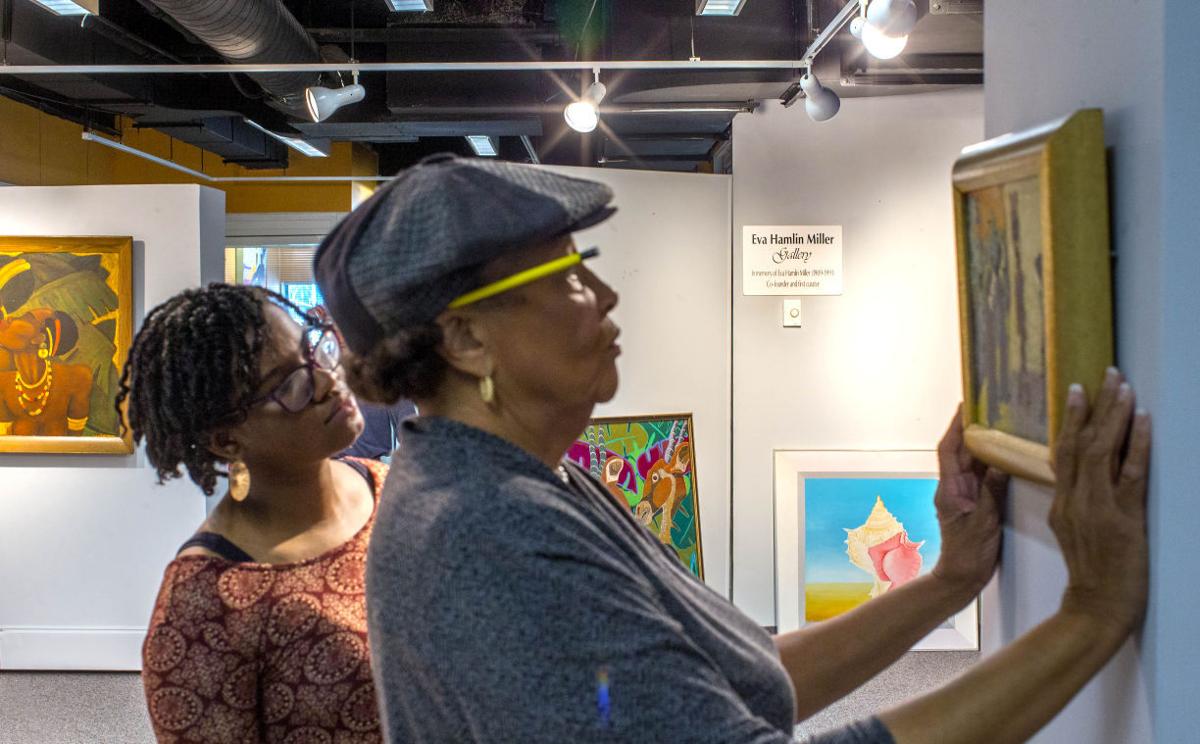 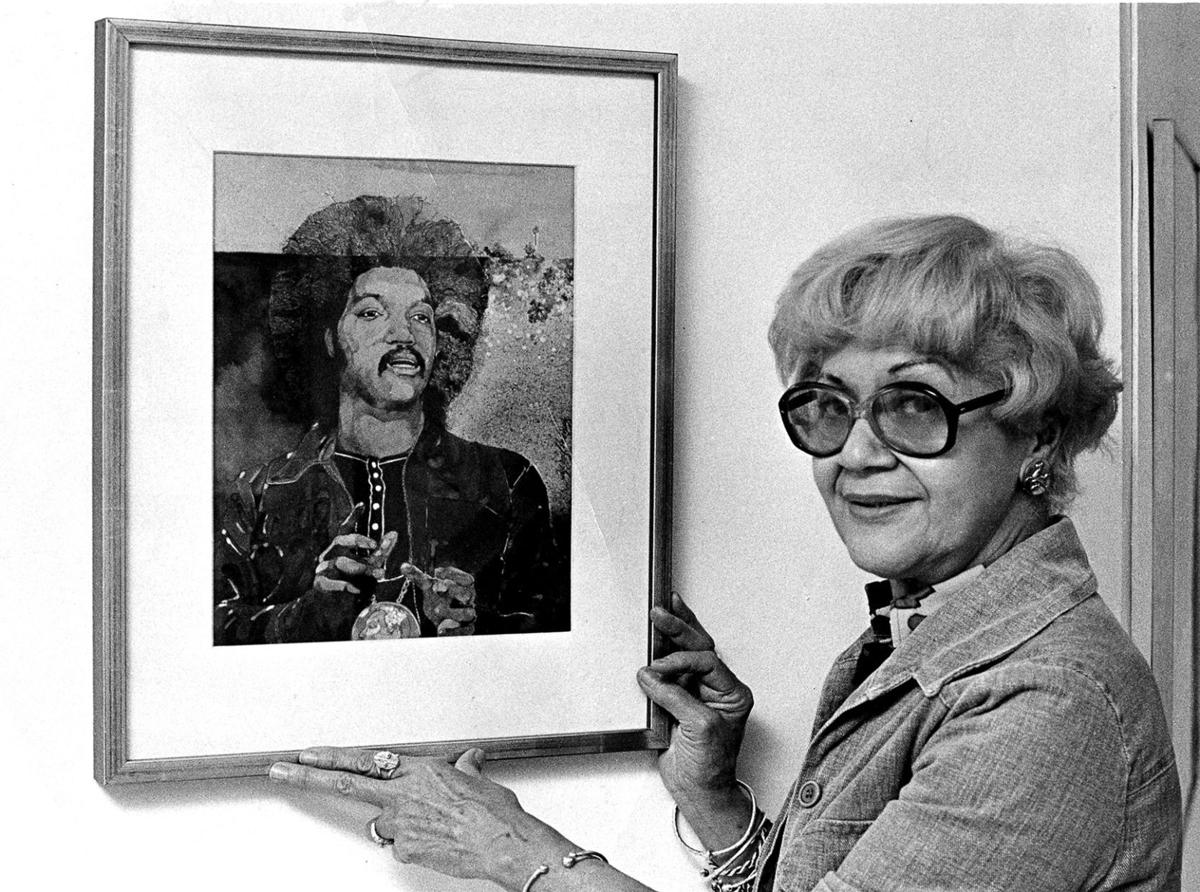 Eva Hamlin Miller with “Jesse Jackson” by Jerry Pinkney at N.C. A&T in 1978. Miller, who

GREENSBORO — Alma Adams carried an unfinished silkscreen collage when she flew to her Congressional office in Washington earlier this month.

She wanted to complete it for display in the 25th annual Founding Members Invitational Exhibition that will open Sunday at the African American Atelier.

The exhibition will celebrate the 25th anniversary of the nonprofit art gallery in the Greensboro Cultural Center that Adams co-founded in 1991 with her mentor, the late Eva Hamlin Miller.

“You don’t think you are going to look back a quarter-century and say, ‘We are still here; we are still relevant and still valued,’ ” Adams said.

Since becoming the 12th Congressional district representative in 2014, Adams has juggled those duties with her curatorial work at the Atelier (the French word for “studio”).

She’s accustomed to a full plate: Before going to Congress, she taught art at Bennett College while serving on the Greensboro City school board, Greensboro City Council and then in the N.C. General Assembly.

“I enjoy hanging exhibits. I enjoy making art when I have the opportunity to do it,” Adams, now 69, said. “I have always juggled several responsibilities, but being in Congress is a tremendous responsibility.”

Nevertheless, “The Atelier is still my baby,” Adams said.

The exhibition will feature paintings, sculpture, etchings, mixed media work and fiber art by Miller, Adams and 18 other N.C. artists. They include founding members and longtime exhibitors Vandorn Hinnant, Floyd Newkirk and John Rogers, and Atelier newcomers, such as Gracie Coleman of Charlotte. Many works will be for sale.

It will spotlight the work of Miller, the gallery’s curator from its opening in January 1991 until her death in December of that year.

Her painting, “Nefertiti,” will move from the Atelier’s office into the gallery.

Other Miller works have been borrowed from Bennett, where she chaired the art department, and from family members and former students.

Adams will loan an oil painting, “Messiah Maiden,” and a sculpture that Miller created while an undergraduate at Pratt Institute in Brooklyn, N.Y. Rogers, another former Miller student, will loan “Color Bars.”

“We wanted to feature her work because she got us all started,” Adams said. “We want to keep her work very present.”

Miller dedicated her life to raising the visibility of African-American artists.

“I was the daughter she didn’t have,” Adams recalled.

Born in Brooklyn, N.Y., in 1909, Miller had earned her bachelor’s degree at Pratt and a master’s degree in art education from Columbia University. Before A&T, she had taught at Tuskegee Institute, Bennett and Winston-Salem State University, and had served as the first African-American art supervisor for Greensboro City Schools.

She made her own art as well, creating paintings and jewelry. She designed stained glass windows for St. James Presbyterian Church and others.

When her husband died, Miller opened the Z gallery in 1982 in his old dental office. There, she exhibited the works of African-American artists.

“We pledged to have a venue for African-American artists in particular, to showcase their work every day of every month of every year, not just in February (during Black History Month),” Adams said.

The gallery now exhibits the art of other ethnic groups as well.

Adams speaks with pride about the Atelier’s efforts to teach art to thousands of children in after-school, Saturday and summer camp programs. Children in its summer program have painted nearly 20 murals around the city.

“I think the community has appreciated the contributions we have made,” Adams said.

But she also sees room for improvement.

Budgets have become smaller. The Atelier operates on about $150,000 this year.

“We have to do a better job of fundraising and friend-raising,” Adams said.

She also wants to create more opportunities for people who are elderly, people with disabilities and young professionals.

The Atelier will continue to fill an important niche, Adams said.

“I am staying put and making sure that the organization survives,” she said.

The 2021 Emmy Awards were a night of firsts and surprises

Cody Rigsby, who grew up in Greensboro, has become a popular instructor for Peloton. Now he'll compete on TV's "Dancing with the Stars."

Eva Hamlin Miller with “Jesse Jackson” by Jerry Pinkney at N.C. A&T in 1978. Miller, who 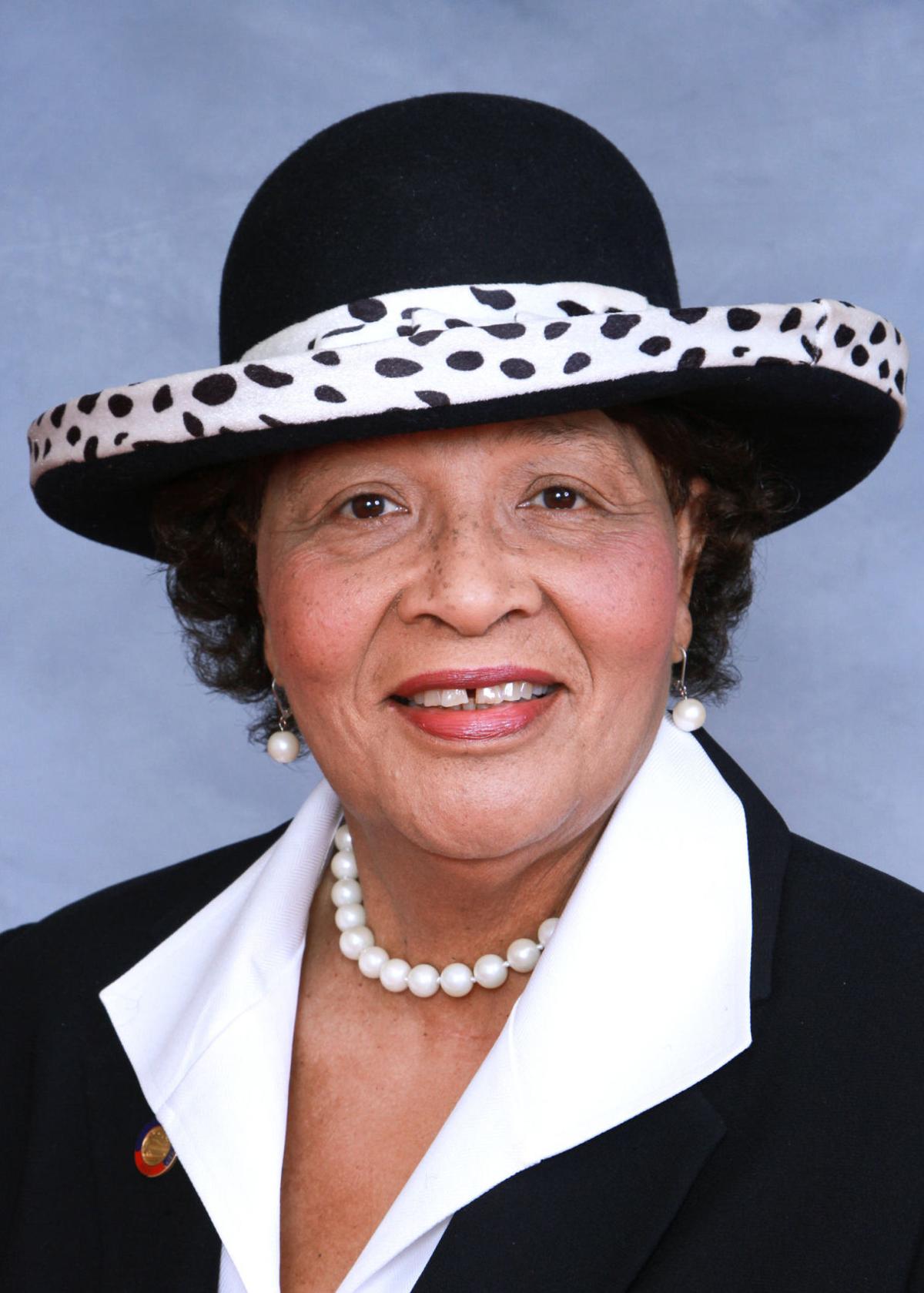