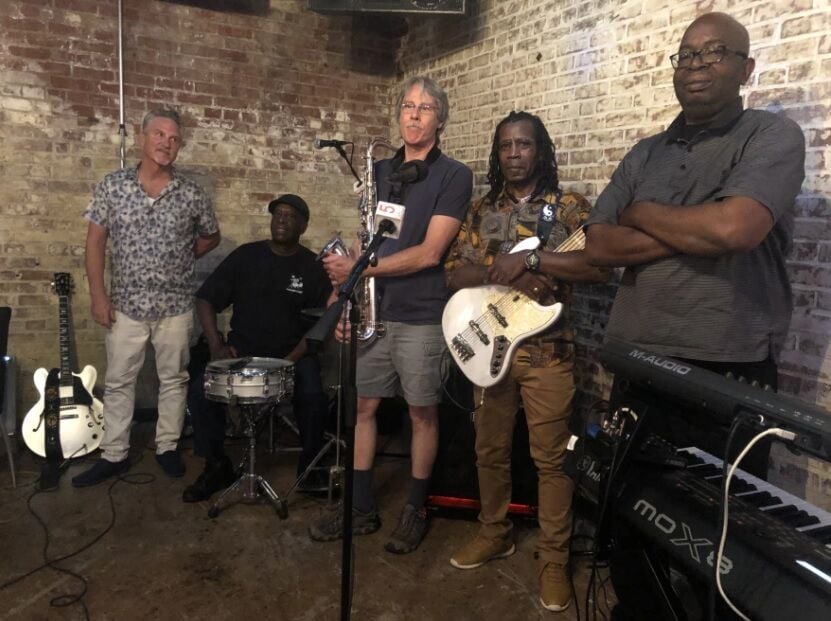 David Bolton wants to expand your thoughts and shrink your head.

In addition to his mind-broadening music spanning four decades, he’s also got 26 years as a psychotherapist on his resume. His Triad Behavioral Resources counseling practice offers psychiatric services, addictions treatment and mental health treatment for adults, adolescents and children.

Muddy and the Wolf were Bolton’s musical instructors, their lessons blasting from old vinyl bouncing off the walls in the laundry room of a dorm at Appalachian State in 1977.

“We used to listen to the Duane Allman anthology, Volume 2, with Duane on everything. Back in the day, we’d just take the record player, just pick the needle up, go back and try to learn the parts. That’s how we used to do it — didn’t have YouTube.”

Bolton started playing guitar while in high school, jamming with local luthier John Mark Hampton, who repaired and designed guitars for Keith Roscoe, then started Zion Guitars with Ken Hoover in 1980 before starting his own business — Moriah Guitars — in 2008.

Bolton was enamored with playing bottleneck guitar even before that, experimenting with the sounds you could get raking a foreign object over the guitar strings. He met Lenny Federal and the Federal Brothers’ slide guitarist Bill Walpole while working his first summer job cutting grass and cleaning the pool at the Lakes Edge Apartments property near Guilford College.

“He said, ‘Duane Allman played bottleneck. He played with a Coricidin bottle, you oughta try it.’ So he would give me little lessons on slide. It all came from there,” Bolton explains.

He got a leg up in the business when his first group — the Half Ass Blues Band — was tapped to back Charlotte native Nappy Brown. Brown, whose semi-pornographic ditty “Lemon Squeezin’ Daddy” had gotten him attention and a chart ranking, came out of retirement. Bolton and the band, who soon changed their name to the more marquee palatable Half Ash Blues Band, gigged with Brown, helping expose Bolton to the real blues scene through Logie Meachum and James “Guitar Slim” Stephens.

“We’d hang out at Slim’s place,” Bolton says. “Logie drug me around every place you could imagine.”

Stephens was a rowdy character with a fondness for vodka and a personality that could elbow any of his peers right out of the room.

“He played in a carnival, played stride piano. And his hands were humongous,” Bolton says. “His thumbs could reach around the fretboard. He could barre a chord with his thumb, his hands were so big. He was somethin’. Man, I learned a lot from him, just by watching him.”

Meachum often escorted Bolton to Eliza’s Cafe on Tate Street when nationally touring bluesmen showed up. He took Stephens along one evening when John Hammond was performing. After Hammond’s last set, the trio went back to talk with Hammond, and Stephens pulled out his old National Steel.

“I never heard anything like it in my life. He was magical,” Bolton remembers. “Johnny Hammond, he was enthralled. It was really just a magical moment back there — me and Logie and Guitar Slim. And that really fired me up about blues because I never really had ever heard anything like that. It was just unbelievable what he could do.”

Around 2010, for a Fat Tuesday gig, Bolton showed off what he could do with a loose ensemble of locals dubbed the House of Dues with Chuck Cotton and a young Sam Fribush. The band also included West End Mambo’s Steve Blake on sax.

“We played a gig. (It) went well, (and I) said, ‘Let’s do a little demo,’ so we can get some gigs. We recorded that first record ‘Gimme Some Hotcakes,’ (and it) went really well, so we just kept playing, and eventually we were gigging around and it just stuck.”

Bolton also had a band called the Stovepipes with Robin Doby and has performed in a group with Fantasia Barrino’s aunt Jackie Dawkins on lead vocals.

The House of Dues went to Memphis in 2012 for the International Blues Challenge as winners of the Piedmont Blues Preservation Society's competition. A year later, the band released “Cross That Line.” Ostensibly a blues band, HOD proves it’s pretty adept at interstellar exploration with “Space Is Ra Place,” a trippy homage to the spaciest astronaut in jazz, Sun Ra.

“We pulled that snippet off YouTube because I was always a big fan of Sun Ra,” Bolton says. “That’s actually his voice on that record.” The band stretches out spatially with the super heavy-duty, get-down-and-roll-around Funkadelic-worthy title cut.

In 2016, Bolton put out “Field Trip,” recorded at Benjy Johnson’s Earthtones Studio. Fred Wesley, who was the band leader of James Brown’s backing band JB’s and Parliament-Funkadelic trombone funk-minister, was also in the studio recording some tracks for local piano professor Dave Fox’s “The Healing Blues Project” and needed some backing. HOD’s bassist Diggs and drummer Cotton jumped in, and on a break, Bolton asked Wesley if he would consider playing on a couple of tracks for him.

“He said, ‘Well, let me hear it,’ and so he played on two tunes, an old Louis Armstrong tune, ‘Do You Know What It Means To Miss New Orleans.’ The other tune was one that Nishah DiMeo sang on, ‘Glory of Love.’ (The project) evolved that way, being in the studio and knowing folks and having enough courage to say, ‘Will you come over and play on my record, and they did.’”

Sidelined from their monthly residency at Fisher’s and gigs around Winston-Salem by the pandemic, Bolton hopes to be up and running soon, with Chris Robinson replacing Sam Fribush, and the addition of Scott Adair at times. Bolton also has a Wilmington band, the Rhythm Bones. “I bring Tim Betts and Scott Adair and Steve Blake down and play with my band down here. We call it House of Bones.”

Meanwhile, Bolton has racked up 40 years working in the mental health field. “In 2005, I had a brother die from addiction, an alcoholic, recovered from heroin and then he got hepatitis C. They gave him pain medicine, and he got back on that stuff and hep C basically killed him,” Bolton says. “At that point, I was running a psychiatric clinic for children and families, and I just started doing out-patient opiate treatment for people addicted to heroin and pain pills. Little did I know it was gonna become an epidemic in the US, so that’s been what I’ve been doing since 1982.

“Then in 2005 when my brother died, I started medication-assisted treatment for opiate addiction. Now I have a clinic in Wilmington, one in Reidsville and one in Greensboro. That’s been a passion of mine, helping people recover from drugs, getting them back on track.”

Scaled-back EMF will return with summer of live music

“We are thrilled to be among the first arts organizations in our community to return to live and in-person concerts and educational programs this summer,” said Chris Williams, executive director of Greensboro-based Eastern Music Festival.

Back in the day, an inexpensive Italian restaurant served as backdrop for my college date nights. Red and white vinyl tablecloths. The wafting…

The national tour of the Broadway megahit "Hamilton" will make its Triad premiere in April 2022 at the new downtown Steven Tanger Center for the Performing Arts in Greensboro.

Tawny Kitaen also starred as the fiancee to Tom Hanks' character in the comedy "Bachelor Party," and as Jerry Seinfeld's girlfriend in a 1991 episode of "Seinfeld."

“We wanted to create something that could only happen at Greensboro Bound,” said Brian Lampkin, a co-founder of the event and co-owner of Scuppernong Books.

GREENSBORO — Graham Sharp had never made a record outside Steep Canyon Rangers, the Grammy Award-winning bluegrass band with which he has play…

Amid outcry, NBC says it will not air Golden Globes in 2022

Amid growing pressure on the Hollywood Foreign Press Association, NBC said Monday that will not air the Golden Globes in 2022.